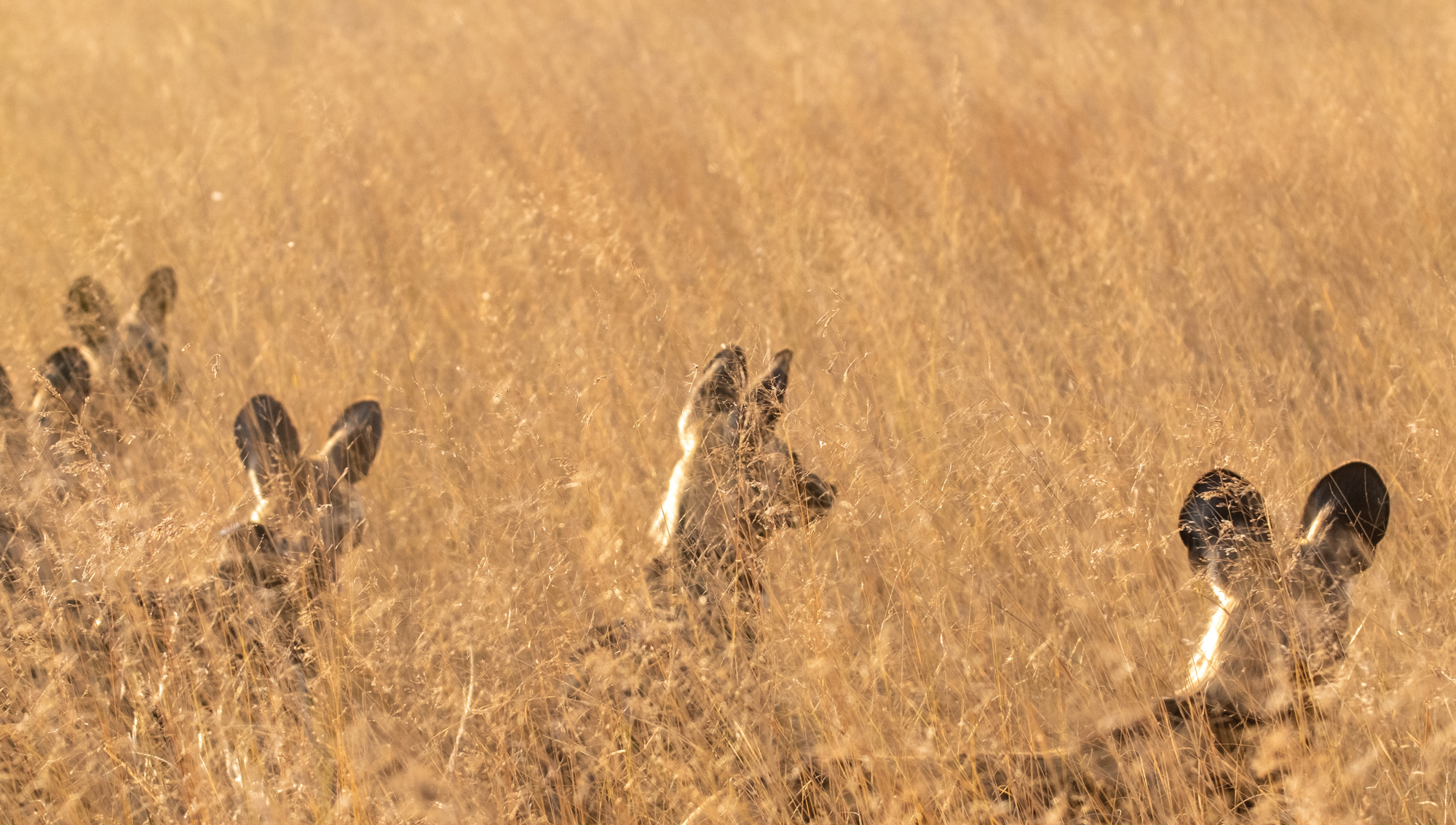 In data and in the field, professor Briana Abrahms seeks ways for humans and wildlife to coexist as the climate changes.

Briana Abrahms and her team are awakened by their alarms at 3:30 a.m. Leaving the relative warmth of their tents, they quickly load up their rugged Land Rover with the gear they’ll need for the day: clothes for the freezing morning and warm afternoon, food and water, GPS devices, VHF (very high frequency) radio antennas and scientific notebooks. The three scientists—UW Assistant Professor of Biology Abrahms, postdoctoral researcher Kasim Rafiq and doctoral student Leigh West—pile into their vehicle. It chugs to life and they’re off, driving in the dark through the Okavango Delta in northern Botswana.

They encounter no pavement, towns or people as they bump along for hours, branches of mopane trees slapping their 1990s-era vehicle. If it breaks down— a frequent occurrence—they’ll have to attempt repairs on their own or radio back to camp for help. They must reach their destination by sunrise, when the four-legged residents they’re tracking get up and start their day.

This has been the researchers’ daily routine for much of this past July (mid-winter in Botswana) while studying the behavior of endangered African wild dogs. In the mornings, they observe the dogs in their dens from a safe distance. When the pack ventures into the bush to hunt, the team follows—or tries to. 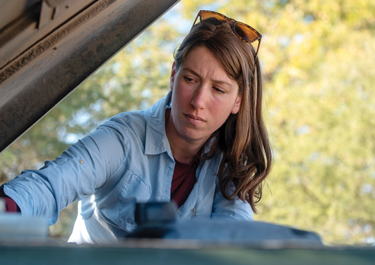 Briana Abrahms focuses on reducing conflict between people and wildlife—but out in the field, if their vehicle breaks down, she and her team double as impromptu mechanics. (Photo by David Bessenhoffer)

“African wild dogs are far more capable at weaving through trees and crossing the Delta’s floodwaters than we are,” says Abrahms with a smile. “So keeping up with them when they’re on the move can be quite the challenge.”

Despite the animals’ sly subterfuge, the researchers’ pursuits have been fruitful. Since 2011, in collaboration with NGO partner Botswana Predator Conservation, Abrahms has been collecting data on African wild dogs and their natural competitors, like lions and cheetahs. They’ve outfitted dozens of adult dogs with collars that record position and acceleration every few minutes: “Kind of like Fitbits for animals,” says Abrahms.

As the Boersma Endowed Chair of Natural History and Conservation, Abrahms is one of many UW faculty members whose positions were made possible by philanthropy—and who routinely involve in their research UW students who are laying the foundations for their own careers. The long-term research Abrahms and team are conducting in Botswana is yielding important data to answer a key question: How are predators changing their behavior in response to climate change?

Field observations from this trip will help them connect information on position and acceleration to specific behaviors like hunting and eating, creating a sort of “Rosetta stone” that translates collar data into actions.

Combing through data, both quantitative and qualitative, is a regular feature of Abrahms’ work at the UW. She focuses on reducing conflict between people and wildlife, particularly wide-ranging animals—like African wild dogs, lions and even whales—which traverse vast expanses of the planet. Her research has not only revealed how these species are shifting their lives as the climate changes—it has helped find solutions for humans and wildlife to share the globe, rather than compete for it.

But this journey begins with data. In Botswana this summer, for example, her team interviewed residents to learn about their conflicts with African wild dogs and other predators, especially as the region’s climate has changed. 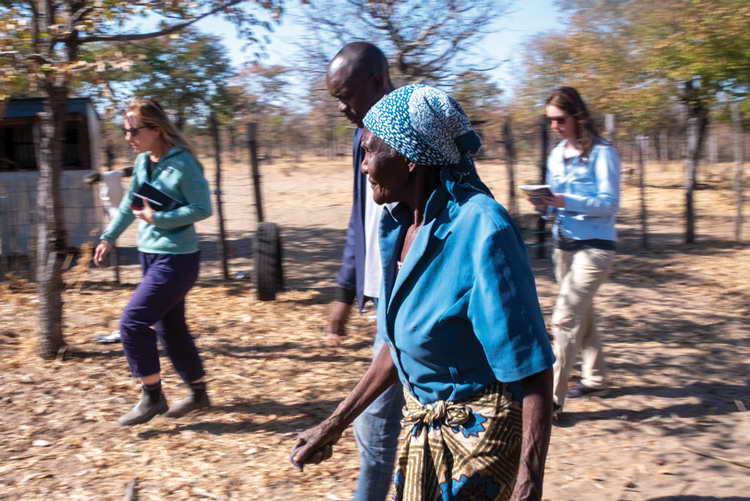 “We hear a lot of accounts of how, during periods of drought, large predators will come into villages to attack livestock,” says Abrahms. “This is a major concern for local livelihoods and public safety, not to mention a threat to carnivore conservation. We’re seeing an uptick of illegal snares in retaliation.”

Now she and her team are combining their field observations of African wild dog behaviors—hunting, resting, reproducing and more—with a robust backlog of movement and location data. Abrahms hopes the “Rosetta stone” they’re developing will unlock rich insights, such as how extreme weather events—like recent droughts and heat waves—alter predators’ hunting patterns and instead send them into villages to prey on livestock. These connections reveal the links between environmental change and human-wildlife conflicts.

Abrahms’ team is collecting similar data and developing “Rosetta stones” for lions as well. “With these data,” Abrahms says, “we can start to anticipate when conflicts will occur and find ways to minimize them.” Her findings inform her work to help governments develop proactive policies that take changing climate conditions into account.

Abrahms says she was first drawn to study African wild dogs in Botswana because of their intricate social behaviors and the vast distances they cover, which expose them to multiple human threats—making the species one of the most endangered mammals on the planet. But she has also studied whooping cranes, elephant seals, Magellanic penguins and blue whales. Her findings have illuminated how these migratory animals use information from their environments—climate conditions, the availability of food and the presence of other animals—to make major decisions about their lives, such as when to migrate or where to breed.

Her research shows the complicated impacts of human-caused climate change. For example, she and her collaborators in Botswana documented the first evidence of climate change influencing how a large carnivore species breeds: They showed that African wild dog pups today are born an average of 22 days later than they were 30 years ago, with fewer surviving past three months old, as a result of warmer winters. 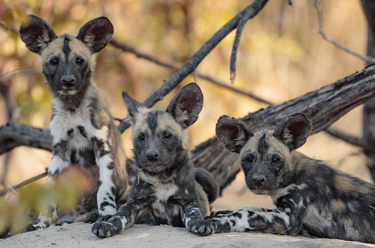 Only 3,000 adult African wild dogs remain in the wild. They are one of the most endangered mammals on the planet. (Photo by Bobby Jo Vial)

But the data can also help make coexistence possible—not just far in the future but right now. In another project, Abrahms collaborated across government, industry and NGO sectors in California to co-develop WhaleWatch, software that uses machine learning to predict the daily presence of endangered blue whales off the West Coast. WhaleWatch is part of WhaleSafe.com, an online tool that helps cargo ships avoid colliding with blue whales in the Santa Barbara Channel and San Francisco Bay Area, two of the West Coast’s busiest shipping hubs. It’s a crucial aid: Recent years have seen a record number of fatal collisions with whales along our coast, and only about 10% of blue whales’ pre-industrial populations remain. But developing the tool required studying how blue whale behavior changes with climate. Abrahms hopes to eventually see it used off the Washington coast.

“Environmental conditions change and habitats shift,” says Abrahms. “But when we know the patterns, we can predict how a species will alter its behavior, and in turn predict how its contact with people will change.”

Changing conservation for a changing world

What does this work mean for the future of our relationship with the planet’s land, waters and wildlife? Abrahms says it calls for more dynamic strategies that respond to shifting environmental conditions, like temporarily closing roads or diverting shipping and fishing activities when environmental conditions trigger substantial changes in animal migration, feeding or breeding.

“But that depends on knowing how these animals are making decisions, and how they respond to the changes we’re making in their environment,” Abrahms says. And that’s precisely what she aims to find out.

Back in Botswana, many large predators struggle to survive due to habitat loss, human-wildlife conflict and climate change, among other threats. But with more and better data on their changing habits, Abrahms is working to help minimize conflict between people and wildlife, and give both a chance to thrive.

After another day observing the pack, Abrahms and her team spend hours driving back over the bush to their campsite as the light fails. Much later, in Seattle, they’ll use machine learning to map their daily notes on African wild dog behaviors to a decade of GPS and accelerometer data, revealing more about how much—and how quickly—they have changed.

But there’s little time for reviewing notes now. At around 9 o’clock, they turn in—and set the alarm for 3:30. 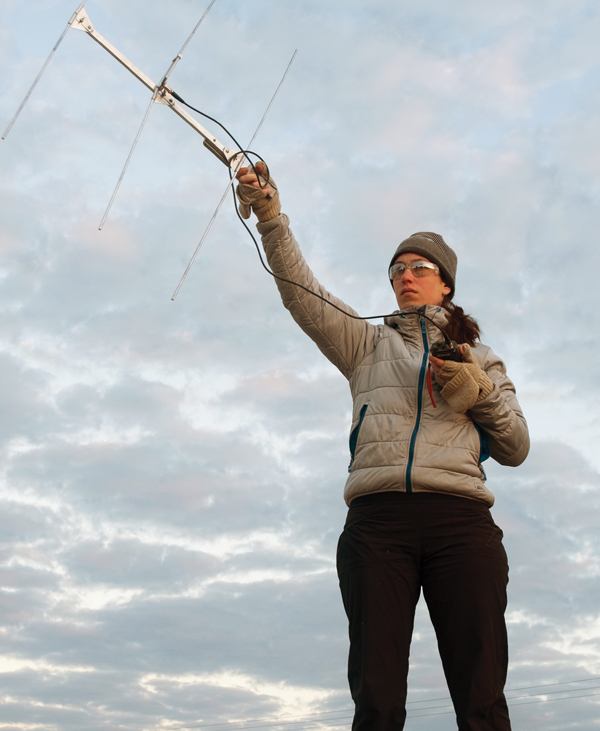 Today, Briana Abrahms holds the inaugural Boersma Endowed Chair in Natural History and Conservation within the UW’s Center for Ecosystem Sentinels (CES). The funding that created her position enabled her to lead research teams on wildlife responses to global change. (Abrahms is also a 2022 Sloan Research Fellow.)

But this is not the career Abrahms envisioned when she went off to college. In her last year as a physics major at Brandeis University, she took an ecology class. “It blew my mind,” she recalls. “I scrambled to take as many courses in ecology and animal behavior as I could before graduation. I had a wonderful ecology professor who encouraged me.”

Realizing that her future lay in biology and not physics, after college Abrahms sought field experience with animals. She worked as a UW research assistant in Punta Tombo, Argentina, with Professor Dee Boersma, an expert on Magellanic and Galápagos penguins—and founder of the CES.

“It was my first time conducting research in ecology,” says Abrahms. “I was as green as could be. But Dee was such a strong mentor and advocate. I learned so much from her.”

After earning a doctoral degree in ecology at the University of California, Berkeley, studying carnivores’ behavioral responses to human development in Botswana, it was as a postdoctoral researcher at the U.S. National Oceanic and Atmospheric Administration that Abrahms began to study how climate change impacts animal behavior. In both roles, she worked with governments to apply this new understanding toward conservation.

Two years ago, Abrahms joined the UW faculty, thanks to the endowment created by Dee Boersma. And that generosity has ripple effects: Abrahms mentors UW students who are beginning their own career journeys.

“Neither of my parents has a college degree, so being a professor at one of the world’s best universities once felt like a distant dream,” says Abrahms. “To have a chair in Dee Boersma’s name, and to be able to pay forward all the mentorship I received, is a huge honor.”