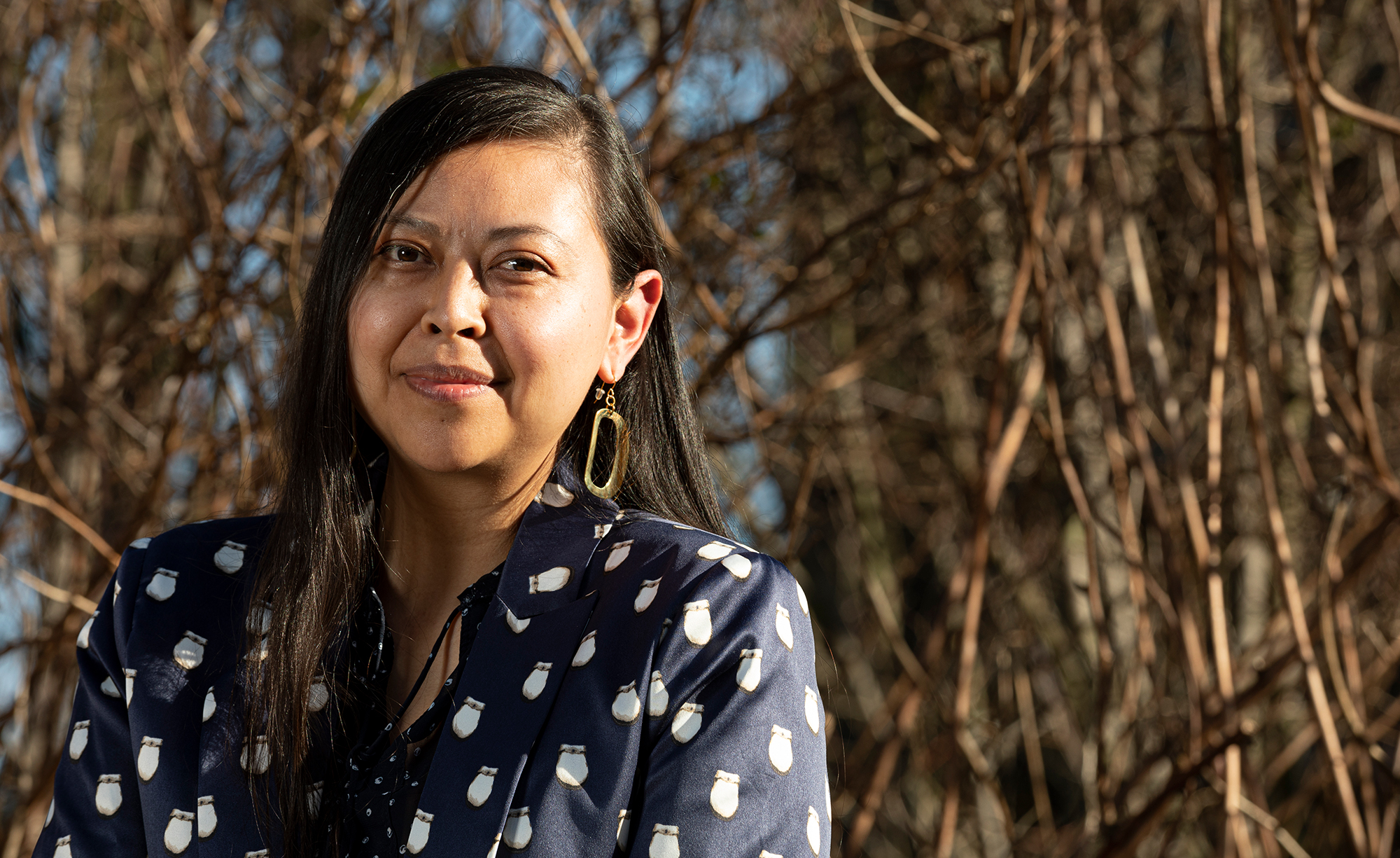 In research, teaching and curation, scholar brings Indigenous voices to the forefront.

Art has always been vital to Miranda Belarde-Lewis, whether it tells a new story or conveys ancient knowledge. It’s also deeply personal. On her mother’s side, Belarde-Lewis is Takdeintaan Clan from the Tlingit tribe, one of several Native groups in Alaska and the Paciﬁc Northwest who tell stories of Raven, a traditional trickster ﬁgure. On her father’s side, she’s Zuni Pueblo, a tribe in the Southwest U.S. known for their painting, pottery, jewelry and other arts.

In high school in New Mexico, Belarde-Lewis learned about and created Zuni art, taking ﬁeld trips to Phoenix’s Heard Museum and entering work in student competitions. In college, she interned with the Arizona State Museum’s office of American Indian Relations during the week and sold Native art at a local gallery on weekends.

It’s no surprise, then, that Native art is still prominent in the life of Belarde-Lewis, an assistant professor in the University of Washington Information School (iSchool) who earned her master’s in museology (’07) and master’s (’11) and doctorate (’13) in information science at the UW.

Even today, Belarde-Lewis says, Native art is often placed in natural-history museums: “There we are, right along with the dinosaurs and all the other long, long-ago objects.”

Her nearly two decades of work with museums—including the Smithsonian’s National Museum of the American Indian, the Santa Fe Museum of Contemporary Native Art, the Suquamish Museum on the Kitsap Peninsula and many others—has brought her closer to Native art from across North America. It has also immersed her in a troubling truth: “Colonialism is at the root of museum practice. The showcasing, the spoils of war, conquests and exploration. That’s how museums got started.”

Even today, Belarde-Lewis says, Native art is often placed in natural-history museums, as artifacts rather than art on its own merits: “There we are, right along with the dinosaurs and all the other long, long-ago objects.”

Through her scholarship and independent curation work with Native artists, Belarde-Lewis is helping bring Native voices and vision to spaces traditionally dominated by colonialism.

That focus was a perfect ﬁt for the iSchool’s Native North American Indigenous Knowledge research initiative; in 2020 Belarde-Lewis was named the inaugural Joseph and Jill McKinstry Endowed Faculty Fellow in Native North American Indigenous Knowledge. The three-year award was created by Jill McKinstry, ’69, ’73, ’87, who was the equity-focused and action-oriented director of Odegaard Undergraduate Library for 17 years, and her husband, Joe. The philanthropic support will help Belarde-Lewis apply for federal grants, involve students in her research and bring speakers to the UW community.

The UW’s collegial atmosphere for Native and Indigenous scholars was part of what drew her here as a graduate student—and why she returned in 2018 as a faculty member. 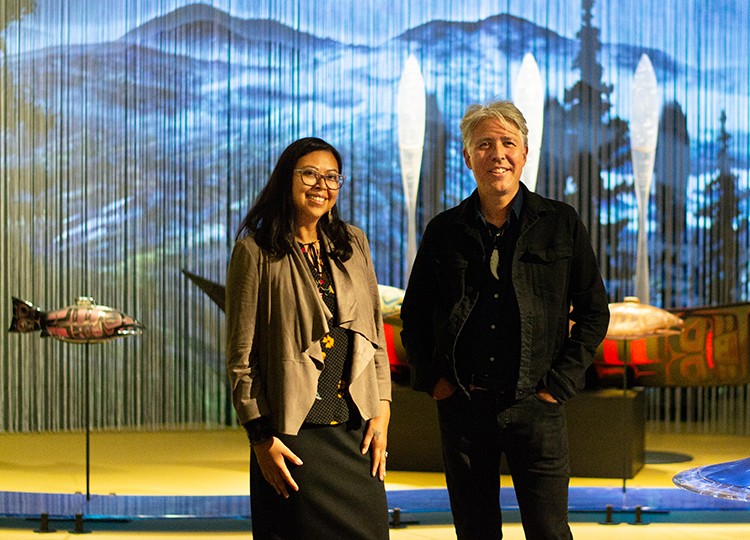 Miranda Belarde-Lewis curated an exhibit of sculptor Preston Singletary’s work, “Raven and the Box of Daylight.” She joined him in 2019 at the Museum of Glass in Tacoma. (Photo by Doug Parry)

How is an Indigenous curator different from a Western curator? “The narrative changes when the people whose objects are there, are in the room,” Belarde-Lewis explains. “When they create the labels, the texts and the sequence by which visitors from other communities will encounter this group of objects.”

Take “Raven and the Box of Daylight,” an exhibition Belarde-Lewis helped curate for Tacoma’s Museum of Glass and which will appear at the National Museum of the American Indian in 2022. Showcasing the stunning blown glass of Seattle-based Tlingit artist Preston Singletary, the exhibition captures one of dozens of Raven stories: Originally a white bird living in a world cast in darkness, Raven tricks a nobleman who’s hoarding the light into handing over the stars, moon and sun, illuminating the world.

From inception to exhibition, Belarde-Lewis worked with Singletary for four years on the exhibit. Together, they considered who has the authority to tell Raven stories, the challenge of giving oral history a physical form, and how best to tell it through glass. Belarde-Lewis had to wrestle with the fact that there are many versions of the same story—be they from a Tlingit storyteller in Whitehorse, Yukon, Canada; from Sitka, Alaska; or from Juneau. This is the level of nuance and care that an Indigenous curator can infuse into an exhibit.

“Native peoples are not a monolith,” says Belarde-Lewis. “We worked very hard not to offend our fellow Tlingits by privileging just one story.”

She explains this concept to her classes with a totem pole as an example: “You can learn about the tree a totem pole was made from. Its imagery represents a story or a person and can give you political insight into whose territory you’re on. It can teach you about how artists are manipulating the material itself—through carving, burning, burnishing or painting. And it can teach you about Indigenous concepts of physics and engineering, because they had to lift that pole up.”

Each community has a unique relationship with the animals, plants, land and waters. “And that inﬂuences how communities have developed their sense of themselves. That’s where my work as a curator and scholar tie together, because I bring a deep-seated respect and awareness to my work.

“I know there’s a lot I can learn about any Native artist or community I work with,” she continues. “But I’m extremely mindful that there’s a whole bunch that is not for me to know.”

The future of the field

Once COVID-19 restrictions ease off, Belarde-Lewis aims to use funding from her fellowship to bring speakers to campus. In the meantime, she’s focused on supporting the Native scholars of tomorrow.

“Mentoring the next generation is where you build sustainability,” she says. “Native communities have been doing this for thousands of generations.”

There are fewer than a dozen specialists in Indigenous information science in North America, but the future looks promising at the iSchool, where two other Native faculty—Clarita Lefthand-Begay and Sandy Littletree, also UW graduates—contribute to research, teaching and mentoring the next generation in this burgeoning ﬁeld.

With the help of her fellowship, Belarde-Lewis hopes to bolster the UW’s Indigenous community and continue work toward a world in which Native American art is more carefully curated and appreciated for its rich artistic merits.

“This is as close to a dream situation as we could have for a Native person pursuing this type of work,” she says. “It comes from the McKinstrys. It comes from the Native North American Indigenous Knowledge initiative. There’s no other iSchool in the world that has a program like this.”