It’s the last waltz for the Wilsonian Ballroom

The Wilsonian Ballroom, with its cozy fireplace and vaulted ceilings, has been a sophisticated fixture on the “Ave.” since its unveiling in 1923. It began as a dining hall for the adjoining Wilsonian Apartments and was later converted into a ballroom. From parties to salsa competitions to Experimental College dance classes, UW students and alumni alike have been enjoying the ballroom and its Roaring Twenties decor ever since.

That may come to an end, however, as developers plan to demolish the 82-year-old space. According to Tom Ferguson, ’65, ’67, owner of both the apartments and the ballroom, the changes are necessary. “The Ave. used to be a really cool place to go,” he recalls of his own college experience. “Now it has very severe problems.” 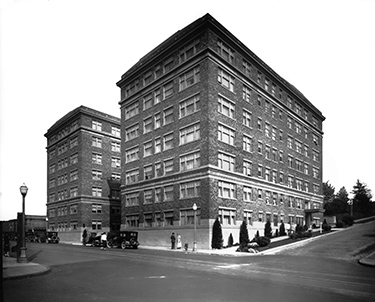 The Wilsonian Apartment Building as it looked in the early 1930s.

According to Ferguson, the renovation plans, which would keep the adjacent apartments intact, will assist the city in its goal of “revitalizing the Ave.” In place of the ballroom and the building which houses Earl’s on the Ave., Ferguson plans to construct a new, seven-story limestone and brick complex with 125 apartments and approximately 10 storefronts. He says that his company tried to make the changes without tearing down the ballroom, but it “was not physically or economically feasible. We cannot have both.”

Several dancers using the space disagree, and have begun an e-mail petition to save the ballroom. They have, so far, succeeded in at least postponing the wrecking ball – the city has said that the ballroom may qualify for landmark status; this process can take several months. For dance instructor Ed Long, the Wilsonian’s demolition is just another in a series of unfortunate, though perhaps inevitable, public ballroom closings. Long teaches ballroom dancing through UW’s Experimental College and has taught at the Wilsonian for nearly 50 years. To him, tearing down the ballroom makes sense, even though he finds it disappointing.

“Everyone wanted to dance in the ’50s,” he says. “There is less of an interest in social dancing [now]. Ballrooms stopped being able to attract such a big crowd.” When he first began teaching at the Wilsonian in the early 1950s, there were 10 ballrooms in Seattle, he recalls. He chose the Wilsonian because of its proximity to the UW, since he loved teaching students.

Long remembers students taking his classes for the pure joy of learning to dance, with college men and women dressing up in fancy clothes, eagerly choosing partners and soaking up his lessons. Students used to come to master the fox trot, the cha-cha and the rumba, among others. Now, he says, he mainly gets students who want to learn to dance for upcoming weddings.

Ferguson has observed the same phenomenon. Ten years ago, his wife Kristin oversaw a major reconstruction of the ballroom, in hope of attracting people looking for wedding and conference venues, because dancing itself was not economically supporting the space. But the ballroom has continued to lose money.

As ballroom dancing falls further out of step with the “U”-District’s commercial needs, another piece of Seattle history may be taking its last bow.