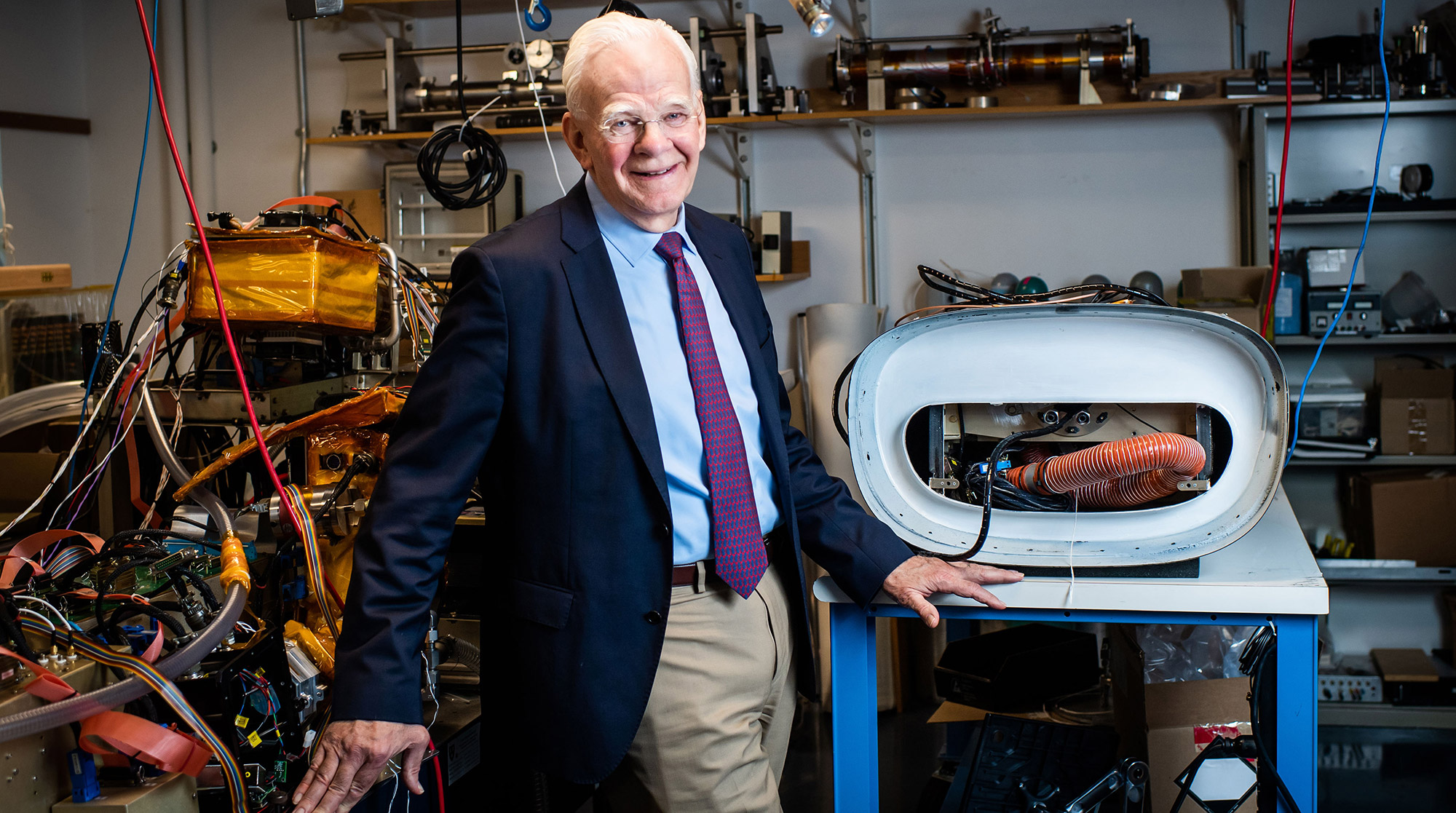 Tenacity led Jim Anderson, ’66, the 2019 Alumnus Summa Laude Dignatus, to help save the ozone; he's not about to give up.

Inside a historic granite building in Harvard Yard, Jim Anderson stood before a group of fellow faculty members who constitute the core group pressing the Harvard administration to divest from fossil fuels. Laser pointer in hand, Anderson reviewed the key arguments behind the case underscoring the imperative for Harvard’s divestment from fossil fuels—the scientiﬁc case underpinning irreversible climate change, the economic costs, the resulting instability in global ﬁnancial structures that trigger social instability, as well as the ethical issues with respect to emerging generations for which the University is directly responsible. The planet, he noted to his colleagues, is running out of time.

Anderson, ’66, has spent his career searching for minuscule traces of chemicals that have damaged Earth’s climate system. His research moved the U.S. to join a worldwide ban on industrial gas chloroﬂuorocarbons (CFCs) that thinned the ozone layer.

Now, he’s taking on fossil fuels. “We inherited this gorgeous system—delicate ice in the Northern and Southern hemispheres—that keeps the amount of water vapor in the atmosphere controlled,” he explained. His tone is almost reverential. But that system is in peril. He notes that Greenland has lost 6,000 billion tons of ice. “That delicate system we inherited,” he says, “is the one we need to return to.”

For his life’s work, Anderson received the 2019 Alumnus Summa Laude Dignatus, the highest honor presented to an alumnus.

The son of a WSU physicist, Anderson loved stars and planets. After graduating from the UW in 1966 with a bachelor’s degree in physics, his next stop was the Laboratory for Atmospheric and Space Physics at the University of Colorado. He set his sights on unstable and highly reactive atoms called free radicals that cause chemical reactions, including those that destroy ozone.

What was obliterating the ozone? Anderson led the effort that found the answer.

Anderson developed the ﬁrst instruments capable of detecting minuscule quantities—less than one part per trillion—of free radicals in the stratosphere. His timing was perfect since the ozone crisis burst on the scene in the early 1970s. In 1978, Anderson joined the Harvard faculty and continued to send increasingly sophisticated instrumentation into the stratosphere. Most recently, he has used a solar-powered strategic aircraft named Odysseus that can ﬂy continuously for 12 months to altitudes of 90,000 feet. He believes Odysseus will launch a new era of affordable experimentation, allowing students around the world to use tools such as ice-penetrating radar to forecast the rate of sea-level rise, measure the breakup of Greenland’s ice mass, forecast drought conditions and wildfire risk, and track the trajectories of severe storms.

In 1986, researchers ﬁrst noticed that the Antarctic’s ozone layer seemed to be thinning, exposing the Earth to intense levels of ultraviolet radiation tied to skin cancer, cataracts, and damage to crops and ocean life. What was obliterating the ozone? Anderson led the effort that found the answer. In 1987, he used a U-2 spy plane from Punta Arenas, Chile, to establish that the CIO radical from the breakdown of CFCs in the stratosphere caused the Antarctic Ozone Hole. That discovery ultimately led the U.S. government to sign the Montreal Protocol in 1992.

That leads us to that meeting inside University Hall on the Harvard campus. Anderson held up a three-inch stack of pages—a new textbook he’d written for students who sign up for an introduction to physical science—as he explained that it was imperative that the university get out of fossil fuels.

“I see these wedges going in,” Anderson says of those who gather and disseminate the facts of climate change. “Each of these arguments strengthens the case that we have an irreversible, profound crisis on our hands.” He clasps his hands. He hopes it’s not too late to save the planet.