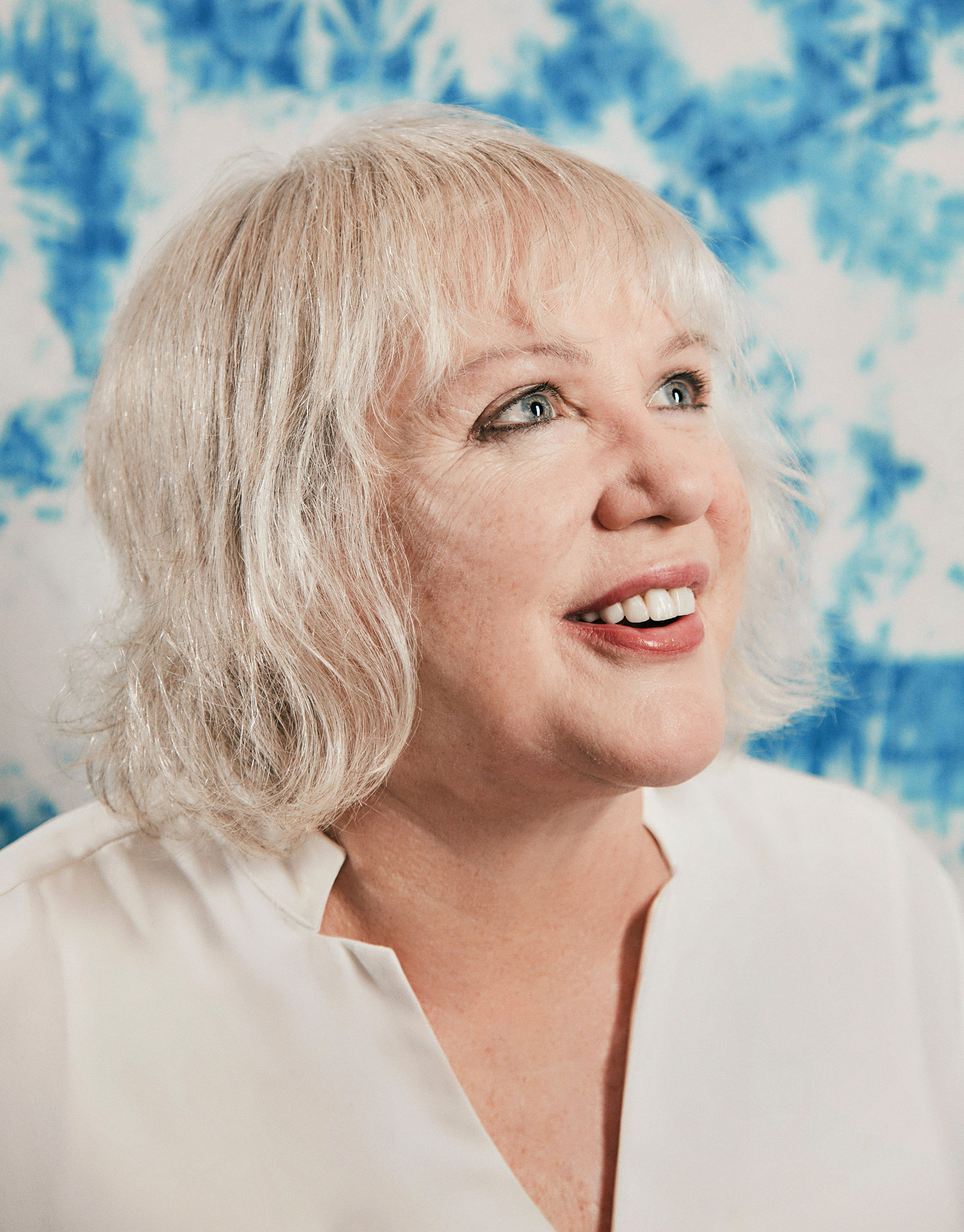 After more than a decade away from showbiz,
the actress and SNL alum is back and
more brilliant than ever.

When Julia Sweeney, ’82, checked into a U District hotel a few months ago, her name covered the marquee at the Neptune Theater across the street. The veteran of The Groundlings and “Saturday Night Live,” was in town to perform “Older and Wider,” a one-person show she developed last year performing at Second City Theater in Chicago. Her goal: step back into the limelight after a 10-year break to raise her daughter, Mulan. As she had done in her hit shows “God Said Ha!,” and “Letting Go of God,” Sweeney rummaged through her life—as a middle-aged mom, a woman just turning 60—for material. “I had all these funny stories about raising her,” she says.

As we sat in front of the fireplace at the Graduate Hotel, a winter storm brewed outside. Sweeney explained that her friend, actor Bob Odenkirk, encouraged her project, saying it would probably take her two years to get back into the acting game. “I would have this cute show, spend two years pounding the pavement and then afterward I would get some parts,” she says.

“But then the opposite happened,” she says. When she took her show to L.A.—where it received great reviews and the performances sold out—no producers attended. Sweeney would have been dismayed, but almost as soon as word was out that she had returned to L.A., the casting calls started coming in. She now has a regular part on “Shrill,” a Hulu series based on the life of former Stranger columnist Lindy West. She plays West’s sweet, thoughtful mother.

Meanwhile, on the new Showtime comedy series “Work in Progress,” she plays herself in a recurring role. In one episode, she offers a glimpse of her androgynous S.N.L. character “Pat.” In the show, co-written by and starring Abby McEnany, McEnany plays herself, a queer and gender-nonconforming Chicagoan. When she first encounters Sweeney in a bar, McEnany confronts her. She explains that when she was younger, people used Sweeney’s creation to mock her. “Your character, Pat, who no one could tell was a man or a woman, ruined my life,” she tells Sweeney.

In real life, Sweeney takes the criticism of “Pat” seriously. She didn’t create the character to make anyone feel bad, she says. When she developed “Pat” at The Groundlings in the late 1980s, she wanted to expose how uncomfortable people were with gender ambiguity. But it became a tool for demeaning people. In “Work in Progress,” Sweeney offers a heartfelt apology. “I feel terrible. I didn’t mean it to be mean. I think I was really naïve,” she says.

Most recently, Sweeney landed a part on “American Gods,” the Starz fantasy drama based on Neil Gaiman’s novel of the same name. One of the conceits of the show is that many of the characters are taken from mythology. Sweeney plays Hinzelmann, a North Germanic sprite, only now he’s in Wisconsin and he’s a woman, a sweet-faced Sweeney. When asked for details about her role, Sweeney demurs. “It’s a great character that I can’t really talk about,” she says. “I can say there is drama, violence and magic. I have a very specific look with glasses and wacky clothes. She’s good character, sweet and chatty, but with a real dark side to her. As an actor, I get to do all kinds of things I haven’t done before. It made my head explode with happiness.” After her visit to Seattle in February, Sweeney was due to return to Canada to film her last episode. “It’s a doozy,” she says.

Sweeney grew up in Spokane in the 1960s and ’70s, the oldest of five children in a tight-knit Catholic family. “In my mind, Spokane was a Norman Rockwell painting. The charm, the old-fashioned beautiful old buildings. It was more of a big town than a small city,” she recalls. And her family: “We did everything as a gang.”

How did she become funny? “Probably for f****d-up reasons,” she says. “There was a lot of alcoholism in our family.” Her brother younger brother, Bill (who died of addiction in 2012), was the bad boy. “I knew I had to be the face of dignity in the family and get positive outside attention. I figured out how to compensate by making people laugh,” she says. Her dad, a federal prosecutor, was funny too, but in a wry and understated way.

“I knew I had to be the face of dignity in the family and get positive outside attention. I figured out how to compensate by making people laugh.”

She relishes the first laugh she ever got. “In second grade, we were talking in class with Sister Mary Kevin about a restaurant that was rumored to be using horse meat in its hamburgers. I said, ‘If you are eating a hamburger and a bugle blows and your burger jumps up and runs, you know it’s horse.’ I got a huge laugh. And I thought, oh my God, I just did a drug that was so powerful and pleasurable.”

She wanted more, so she started playing with voices and characters. She was voted funniest girl every year from second grade to eighth grade. As a teen, she threw herself into competitive debate. Her dad helped her find great monologues, and she frequently won. These were signs of her future, only she couldn’t recognize it. “It never occurred to me I could earn a living from telling funny stories,” she says.

She decided to attend the UW partly because if it was far from Spokane. Sweeney set herself on a path to study business even though “I wanted to major in history because I love history,” she says wistfully. “But my mom said, ‘What are you going to do, be a waitress and read history on your break?’” Still, Sweeney managed to sneak in enough history classes for a second degree (along with some film studies classes) on her way to an economics degree.

She relished her time in Richard Jameson’s class on the American Western and Kathleen Murphy’s class on women and the cinematic imagination. She thought they were both brilliant teachers. “Then later I learned they were married to each other! How amazing is that?” When she wasn’t on campus—she served a term as the ASUW vice president—she was at the Varsity Theatre, where she worked six days a week. “I lived on popcorn and studied and saw movies,” she says.

After college, her love of movies drew her to Los Angeles, where she decided to find a job as an accountant in the film industry. “I found this very safe way in,” she says. “I had never thought of being an actress.” She imagined, being in L.A., that everybody would be talking about movies day and night. “It turns out that my coworkers were just interested in doing accounting. After a couple of years, my boss said I needed to get an MBA or a law degree to move ahead. And I thought, `But I don’t like accounting,’” she says. She was 25 and she decided, finally, that she would become an actor. She started taking classes with The Groundlings improvisational comedy school and troupe, where she met future “Saturday Night Live” castmates Phil Hartman and Jon Lovitz. It took a few years before she was discovered by producer Lorne Michaels, and she joined “SNL” in 1990.

For her first two years in New York, she lived with her favorite UW professors, Jameson and Murphy, who had relocated for their work as film critics. Sweeney spent four seasons on “SNL.” She then returned to L.A. to work in movies, including “It’s Pat,” “Pulp Fiction” and “Honey I Blew Up the Kid.” She then shifted her focus to her family because her younger brother, Michael, was dying of cancer. Sweeney then received her own diagnosis of cervical cancer, which required surgery and chemotherapy. Those experiences, including that of moving Michael and her parents into her bungalow, culminated in “God Said Ha!” the first stage show she created out of her own experiences. The show became a movie—it received the Golden Space Needle for best film at the 1998 Seattle International Film Festival—and a best-selling book.

She continued to act in prime time with small parts on “Sex and the City,” “Frasier,” and “3rd Rock from the Sun.” And along the way, she developed other autobiographical monologues, the most recent being “Older and Wider.” This will be her last one-person show, she says. “I am at the end of it. It’s hard to do the shows and sell out,” she says. “It’s just a little better than break-even. Maybe $600 after the expenses.” She can still get her audience fix by slipping into friends’ shows in L.A. for her “15 minutes of fun,” she says. Her last monologue performance is destined for Spokane’s newly renovated Fox Theater. That show, originally scheduled for early April, was postponed because of Covid-19. She plans to film the final show and produce it for streaming on a digital channel.

“When you get to be 60, you get to thinking about the alternative lives you could have led,” she says. “I look at Seattle and think, why didn’t I just stay here? Maybe I would have become a history professor.”

Hannelore Sudermann is the managing editor of University of Washington Magazine.