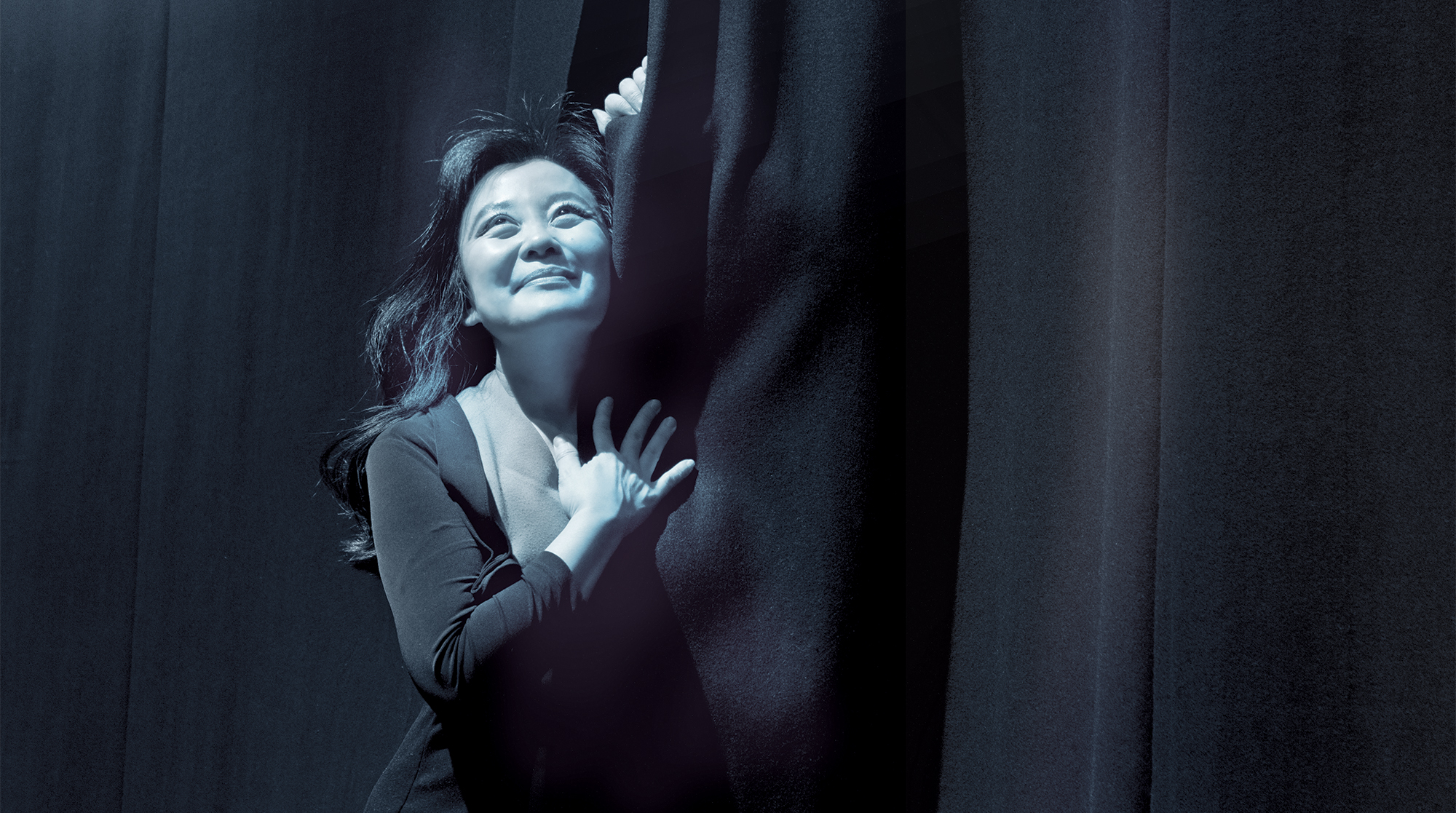 The dramatic dynamics of Kathy Hsieh

She breaks stereotypes and builds opportunities for people of color in the theater. Now the performer, writer and director is primed for her next act.

Seattle theater audiences may know Kathy Hsieh as the cagey bilingual vice-minister Xi Yan in the 2015 ArtsWest production of “Chinglish,” where she parried in a hilarious culture clash of miscommunication. Or they might remember her as Fujiko in the 2007 Book-It production of “Snow Falling on Cedars,” or as Elizabeth in “Sex in Seattle,” a wildly popular live-theater soap opera that ran for 12 years and 20 episodes in several different venues.

Yet acting is just a part of Hsieh’s multi-faceted career. As a writer, producer, director and arts administrator, she has been a force in breaking down Asian American stereotypes and creating opportunities for people of color. Over the course of her 35-year career, Hsieh, ’87, has become the face for Asian American theater in Seattle. And now, with racial justice and immigrant rights at the forefront of our national debate, her ability to take risks, stand up for equality, and build bridges is greater in demand than ever.

“People can’t help but fall in love with her,” says producer and playwright Roger Tang, ’85, who has worked with Hsieh and followed her career from the beginning. “She stands as a concrete example to young Asian American artists that it is possible to do it well.”

Hsieh (pronounced “Shieh”) grew up in a family of high achievers. She was born in Logan, Utah, in 1965, while her parents were graduate students at Utah State University. Her mother, Gertrude, emigrated from Taiwan to earn her master’s degree in biochemistry and her father, George, from Hong Kong to get his Ph.D. in civil engineering. They met at the university, got married, and had Kathy and her brother, David ’88, just 11 months apart. (David is also a Seattle theater artist and founder of the multicultural theater group ReAct.) The family moved to Seattle in 1968, when George was hired as a civil engineer by the City of Seattle.

When Kathy started preschool, she could understand English but didn’t yet know how to speak it. Her bilingual parents mostly spoke Mandarin at home. She remembers being extremely shy. On the playground, she would just sit next to her favorite teacher, observe and listen. Then one day, the language wheels clicked into place and Kathy suddenly could communicate with the other kids.

But her shyness about speaking persisted through her school years. In middle school, even though her test scores were exemplary, Hsieh was asked to interview before being accepted into the honors program. Teachers were surprised to discover she actually spoke English very well.

Hsieh never has been shy about performing. From the time she was four or five years old, she took part in church and school plays, and performed in a Chinese dance troupe. In sixth grade, her best friend talked her into performing a silly comic sketch in a school performance. When the audience roared with laughter, Hsieh was thrilled. “I was so excited to be on stage in front of people and speak three lines and have people respond positively,” she says. Kathy Hsieh starring in the ArtsWest production of “Chinglish,” a bilingual comedy rife with failed translations, alongside Evan Whitfield.

That experience carried over to Nathan Hale High School, where, as a freshman, Hsieh was cast as a secretary in Neil Simon’s “Plaza Suite.” She knew nothing about stage directions or how to project her voice, yet all the older cast members helped and supported her. “Everything was so collaborative. That’s what I fell in love with,” she recalls. From then on, she auditioned for every school play and also pitched in to help with costumes, props, scenic design and promotion. She adored all of it—and wanted more.

Seattle Children’s Theatre offered acting classes, so Hsieh began stashing away her allowance and skipping lunch to save money. She remembers taking three buses for the two-hour trip to SCT (then located at Woodland Park) to audition for “Runaways” directed by Bruce Sevy. She was chosen for the cast.

Around that time, she also auditioned for famed Hollywood director and producer Stanley Kramer (“On the Beach,” “Ship of Fools”), who was living in Bellevue and ran a performing arts summer program there. He was enthusiastic about her work and she was called back. But Kathy’s parents both worked full time, and the logistics of busing and scheduling were too difficult, so she had to turn down that opportunity.

These days, Hsieh shakes her head at the idea she actually said no to Stanley Kramer. But at that time, she had no idea who he was.

Because Hsieh was cast in everything she tried out for, she never actually saw a play performed until she was 16. Sitting in an audience and watching Seattle Children’s Theatre production of “Twilight of a Crane” was a new and thrilling experience. Yet the most memorable thing about it was seeing actors on stage who looked like her. Everyone in the cast was Asian American. To a young Chinese American girl in Seattle, “It was mind blowing,” she recalls. That experience would remain a touchstone.

When time came for college, Hsieh turned down a $10,000 Presidential scholarship at the University of Southern California’s film school; she didn’t like Los Angeles. Instead, she enrolled at the UW and chose speech communication as her major. A high school teacher had told her that as a woman of color, she had little chance of making a career in acting. So she bypassed the drama department and decided to overcome her biggest fear: public speaking. Although she had practically grown up on stage, that may sound contradictory. But for Hsieh, speaking from a script and pretending to be someone else actually took away her self-consciousness.

She quickly learned that speech communication was about the psychology of how people speak, why they speak and how they communicate verbally and nonverbally. That fed right into her craft as an actor, and soon Hsieh found herself back in acting classes at UW and auditioning for shows there, as well as in the community.

Acting helped pay her way through college. It also allowed her to share in the glory of Northwest Asian American Theatre’s acclaimed “Miss Minidoka 1943,” which debuted at Theatre Off Jackson in 1987 to rave reviews. The musical, about a beauty contest at the Minidoka internment camp, was directed by Bea Kiyohara, ’65—a pillar of the Asian American theater community—and built around “outrageous comedy that scores off a whole bundle of racial stereotypes,” according to a Seattle Times review. It worked because “it was created and performed by the very people it’s caricaturing.” The play was a huge hit and sold out every performance, eventually touring around the state and to Vancouver, B.C. Hsieh played the title role and was soon thereafter crowned Miss Seattle Chinatown and Miss Talent in the 1991 Miss Chinatown USA Pageant. She also was appointed managing director of Northwest Asian American Theatre (NWAAT), which became the proving ground for her administrative abilities.

“I created an actors’ group, a national playwrights’ festival to develop new work. I learned how to do marketing, grant-writing, cleaning toilets, janitorial duties; how to hang lights, do set design. Everything you can think of in theater, I learned doing that job,” Hsieh recalls. Roger Tang, then a board member of NWAAT, remembers that although Hsieh was only 25, her abilities and intelligence were obvious: “She became the contact for the theater, and handled it so articulately and in such a knowledgable way—that’s a pretty rare gift.”

By then Hsieh had figured out that her high school drama teacher was right about one thing: the opportunities for Asian American actors in mainstream theater, film and television were very limited. Stereotypes still ruled.

“You can only audition when parts are available,” Hsieh says. “And a lot of parts I’d been called in for, nine out of ten, were Prostitute #1, Prostitute #2. They were all prostitutes—it was crazy.” As an actor, Hsieh had little control over the roles available to her. As a director, however, she had the power to choose plays that were more representative of real life. Since there were few plays with good roles for Asian Americans, she started writing and producing them herself.

In 2000, Hsieh and friends co-founded SIS Productions, a not-for-profit theater company dedicated to truthful portrayals of Asian Americans, particularly women. The show that gave them their name was “Sex in Seattle.” The idea was simple: Show young Asian American women as normal people coping with the usual range of relationship problems. Hsieh, married to photographer Rick Wong, was well aware of the lack of role models in pop culture.

Loosely inspired by the television show “Friends” with a nod to “Sex and the City,” the story revolved around four young women, with jobs ranging from schoolteacher and graphic designer to a psychic hotline operator. The script let the women show their vulnerabilities and competitiveness, along with all the twists and turns of their sex lives—real and imagined. These were not stereotypes; they were quirky human beings. And they were funny.

Hsieh and her cohorts debuted the first script with a staged reading at the Northwest Actor’s Studio. With low expectations, the producers sent out 200 postcards and posted notices in local Asian publications. They charged $5 for tickets and were shocked when the 99-seat house filled up quickly. Among the people turned away was a reporter for Seattle Weekly.

The show rocked. An excited friend donated $1,000 and SIS Productions was in business. “Sex in Seattle” played over a dozen years in 20 different episodes and eventually spun off a franchise in Vancouver, B.C.

Theater artists rarely have the luxury of just doing a show. They have to make a living, too. So in 2003 Hsieh accepted a part-time job as community liaison at the City of Seattle’s Office of Arts & Cultural Affairs. For her, the job was about “being innovative and creative enough that people could come to me with whatever crazy idea they had, looking for someone to listen and help them connect some dots.” Crazy ideas, Hsieh points out, can lead to amazing things.

She has since been promoted to a full-time post as cultural partnerships and grants manager, with the caveat that she can arrange her vacation time to perform in a couple of plays each year. The position gives her power and a prominent platform to promote equal opportunity for all artists, regardless of race, gender, age or sexual orientation.

Her skill in negotiating such sensitive turf was apparent in 2014, when the Seattle Gilbert & Sullivan Society presented the comic 19th century operetta “The Mikado.” The group was caught off guard when a Seattle Times editorial writer objected to its depictions of an imaginary Japanese culture, and that Asians were portrayed as demeaning stereotypes by non-Asian actors. A controversy ensued, with high emotions all around.

Hsieh stepped in to help plan the Artistic Freedom & Artistic Responsibility Forum, where more than 400 people gathered at the Seattle Repertory Theatre to seek solutions. She told The Times, “It’s not just one show or one incident that’s at issue. … The underlying politics of why the controversy even happened are what needed to be addressed.” Those are the same issues Hsieh works through with students at UW, where she occasionally teaches a 400-level class in Asian American Theater.

“If there is a core to all I do, it’s about creating a community that supports opportunity for people of color to participate in the arts the same way everyone else is,” she says. “If we want to uplift all artists, find the artists with the greatest challenges. If we are able to take away those challenges, everyone gets uplifted.”

Sheila Farr is a former arts critic for the Seattle Times. Her last piece for Columns was on the UW Dance program.