Founded by a UW alum, the celebration focuses on diverse faces in the LGBTQ community. 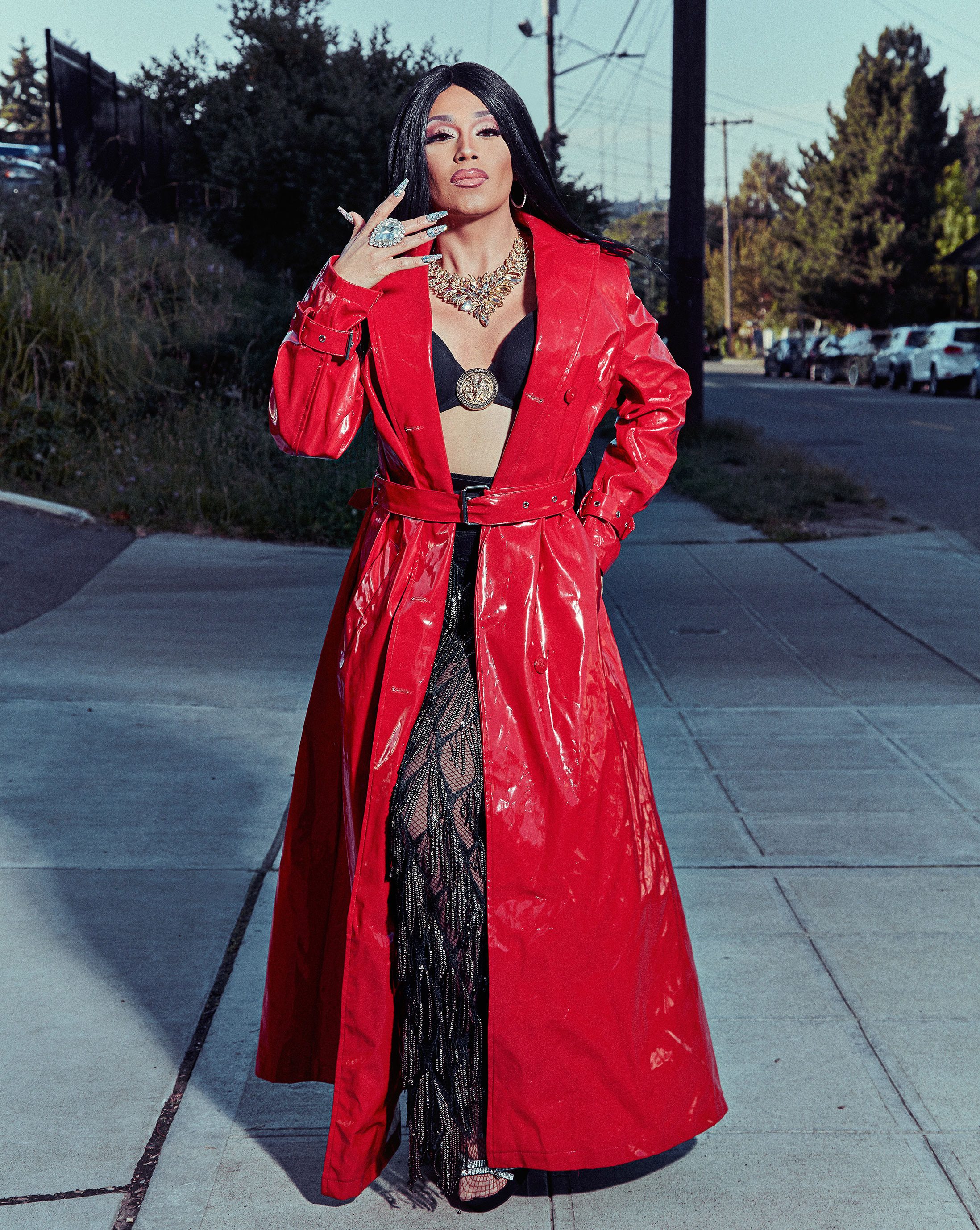 For Ray Corona, ’13, the Latinx Pride Festival is in many ways a tribute to his mother. After he came out, his mother, who died in 2016, embraced not only him but his group of queer friends as well. “My house became the go-to house and go-to family for support.” In that spirit, Corona and his friend Monserrat Padilla, coordinator for the Washington Immigrant Solidarity Network, founded Somos Seattle in 2017 to help Latinx LGBTQ people connect and celebrate their identities.

In July, Somos hosted the third Latinx Pride Festival at Plaza Roberto Maestas in Beacon Hill. “I think Pride should be more than one month,” says Corona, who immigrated to the United States when he was 9 and grew up in Everett. The festival increases the visibility of Latinx people as leaders and members of the LGBTQ community while also creating a place to celebrate their language, culture and experiences, says Corona, who received Mayor Jenny Durkan’s 2019 Emerging Leader Pride Award in June.

As a student at UW Bothell, Corona qualified for Deferred Action for Childhood Arrivals, an Obama Administration program that allows undocumented people who migrated to the U.S. as children to stay and work temporarily without fear of deportation. Given the uncertain future of DACA, Corona would like to expand Somos throughout the state and create an organization that can continue without him. “I want to make sure people are feeling supported and connected, not just our LGBTQ community, but overall, especially given this particular political climate.” 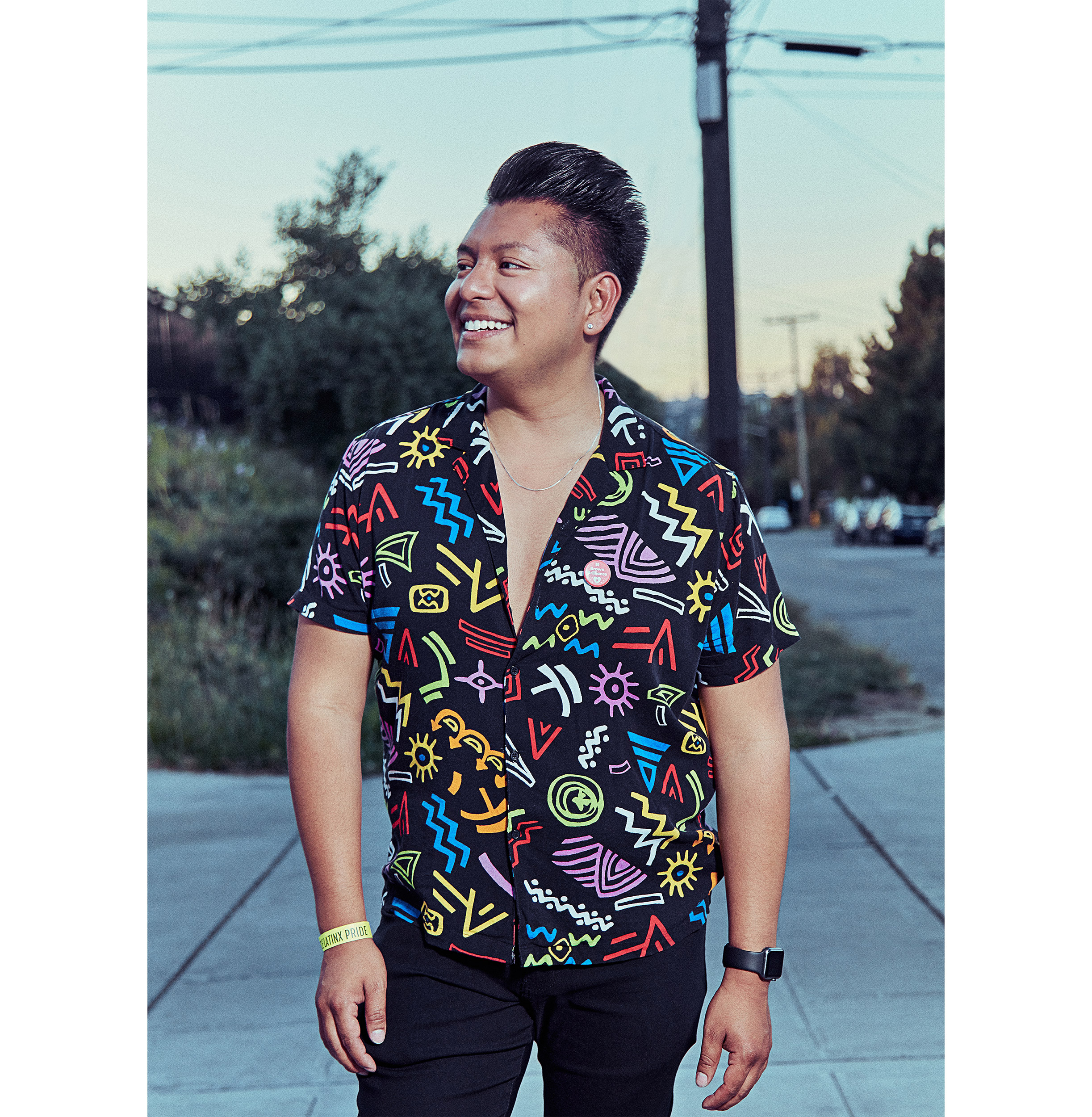 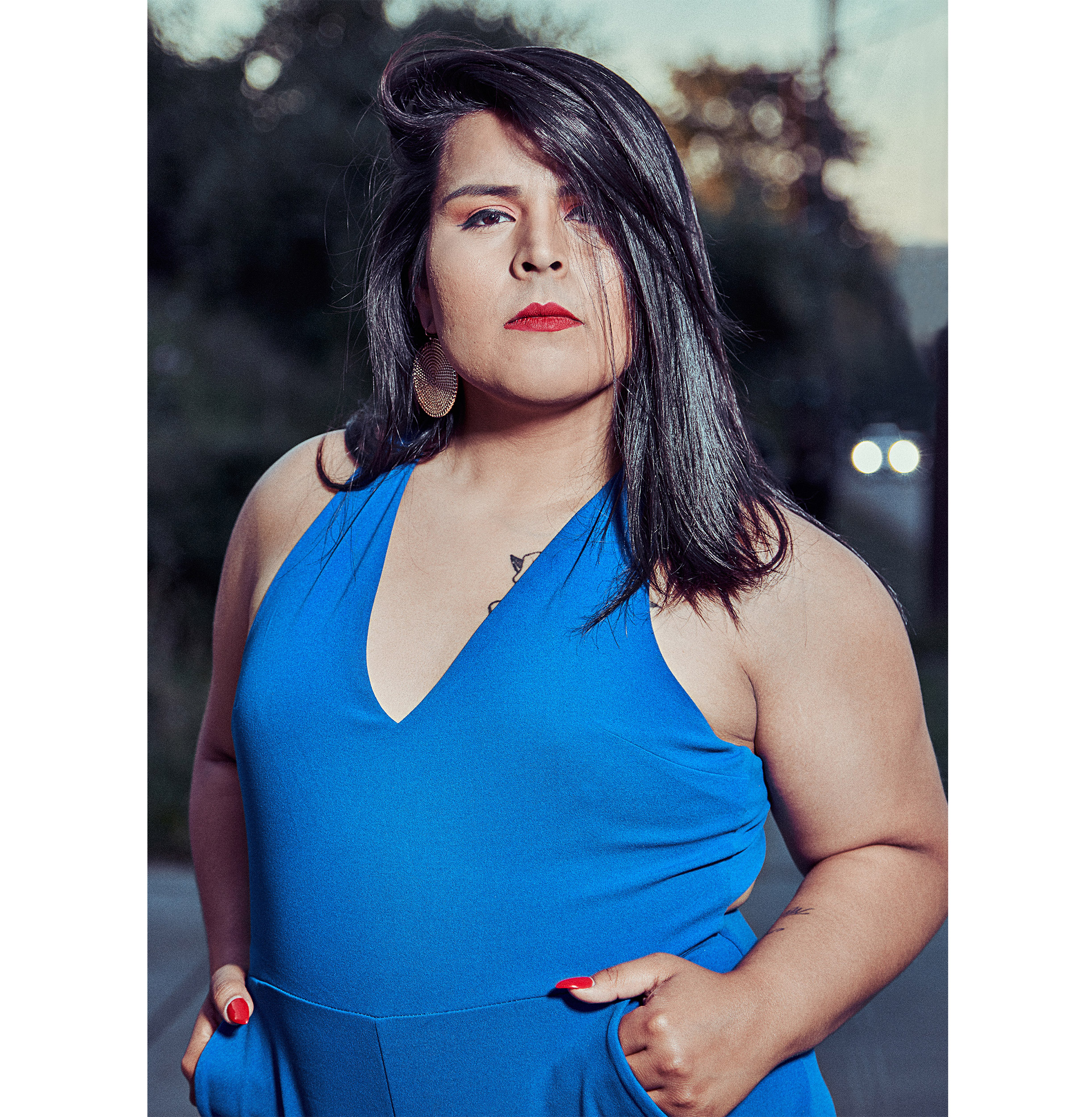 “The vision of Latinx Pride was to fuse both of those cultures, all of those identities—the immigrant, the Latinx, the LGBTQ—and have this new generation that understands we’re not just LGBTQ on one day, Latinx on Tuesday, a woman on Wednesday. We’re all those things actively every single day and it’s through the intersections that we live our lives. I am undocumented and unafraid, transgender and unashamed.”

Aurelio Nunez as Cardi B, 30 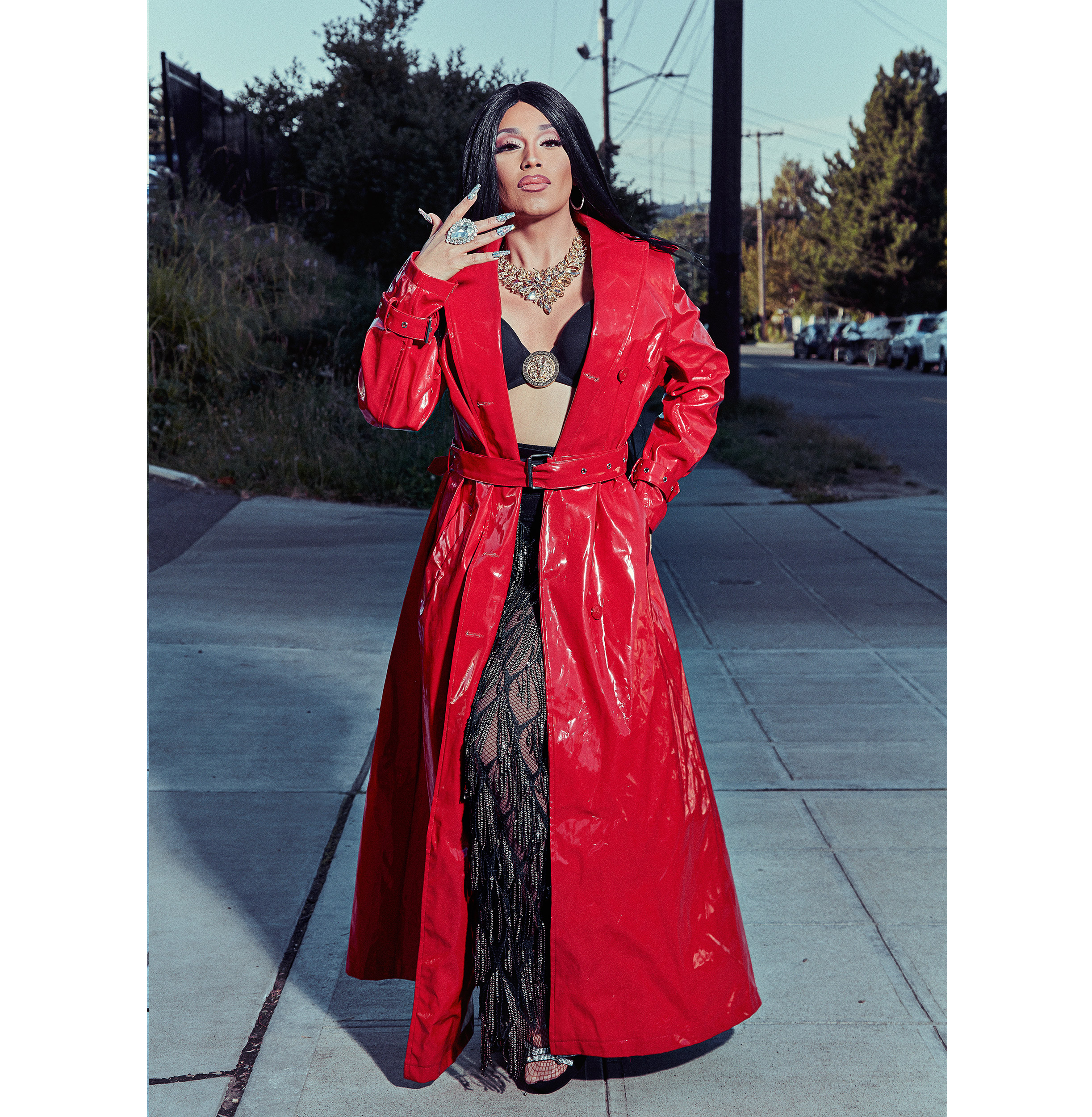 “I’ve been doing celebrity impersonations since I was 18 years old. Every single pride event that I have performed at means so much to me. Anyone who comes to these events knows that you can be yourself to the fullest. You’re not going to care about what anyone has to say.” 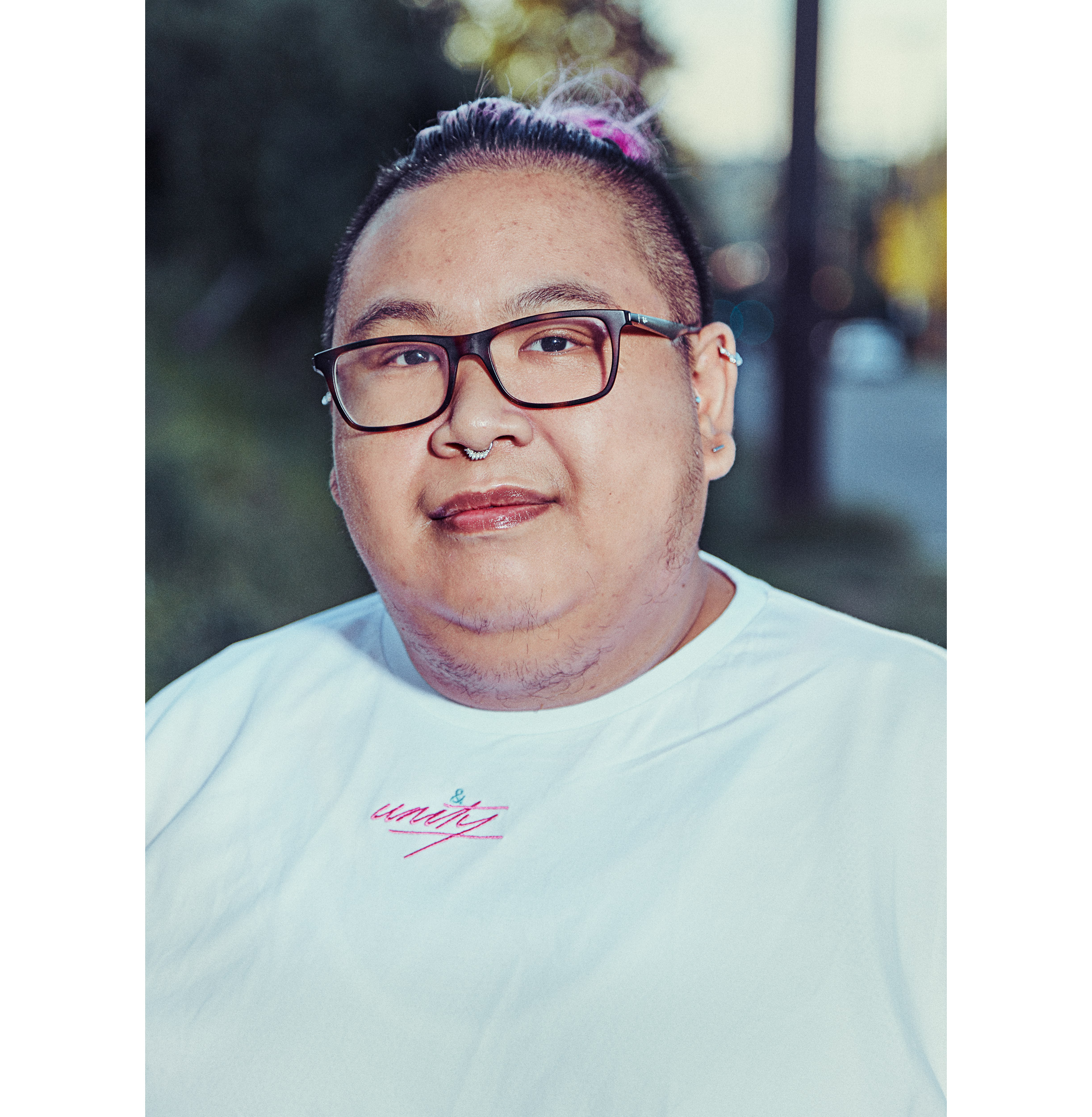 “A few weeks after (the Pulse nightclub shooting in 2016) I went to a drag show during Seattle Pride. I saw Latrice Royale from RuPaul’s Drag Race propose to her fiance. After that, I realized that love is love and I deserve to find that love, too. The next day while I was driving my mom to the grocery store after church, I came out to her. She told me she loved me and that’s the only validation I felt I needed.” 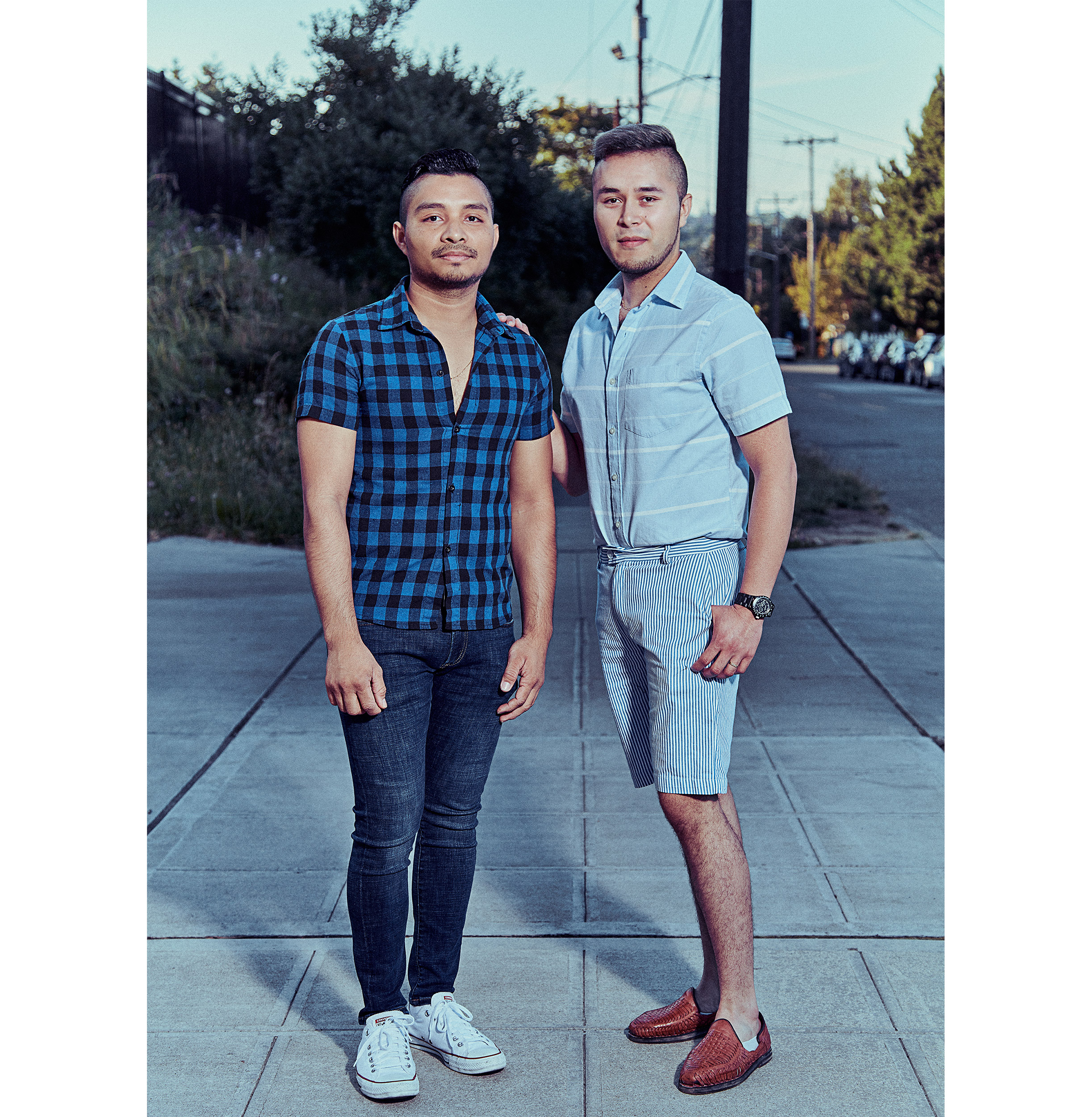 Yiovanny: “I’m Mexican, from Michoacan and I’ve been in the United States for almost three years. My parents have been here for 23 years. They came to the U.S. to have more financial stability. When I was about 24, they were able to petition for me to gain residency. Juan is from El Salvador. We’ve been living together for a year. I met him at a club in Capitol Hill, but we’d only seen each other from afar. He sought me out and suggested we go out on a date the Monday after a Latino-themed party they do at that club on Sundays. After about two weeks, we decided to move in together. It’s been nice to spend more time together, living modestly in our apartment. His legal status is in limbo. We’re waiting until November for his next court date to determine whether he’ll gain residency or be denied. We’re hoping for a positive result.” 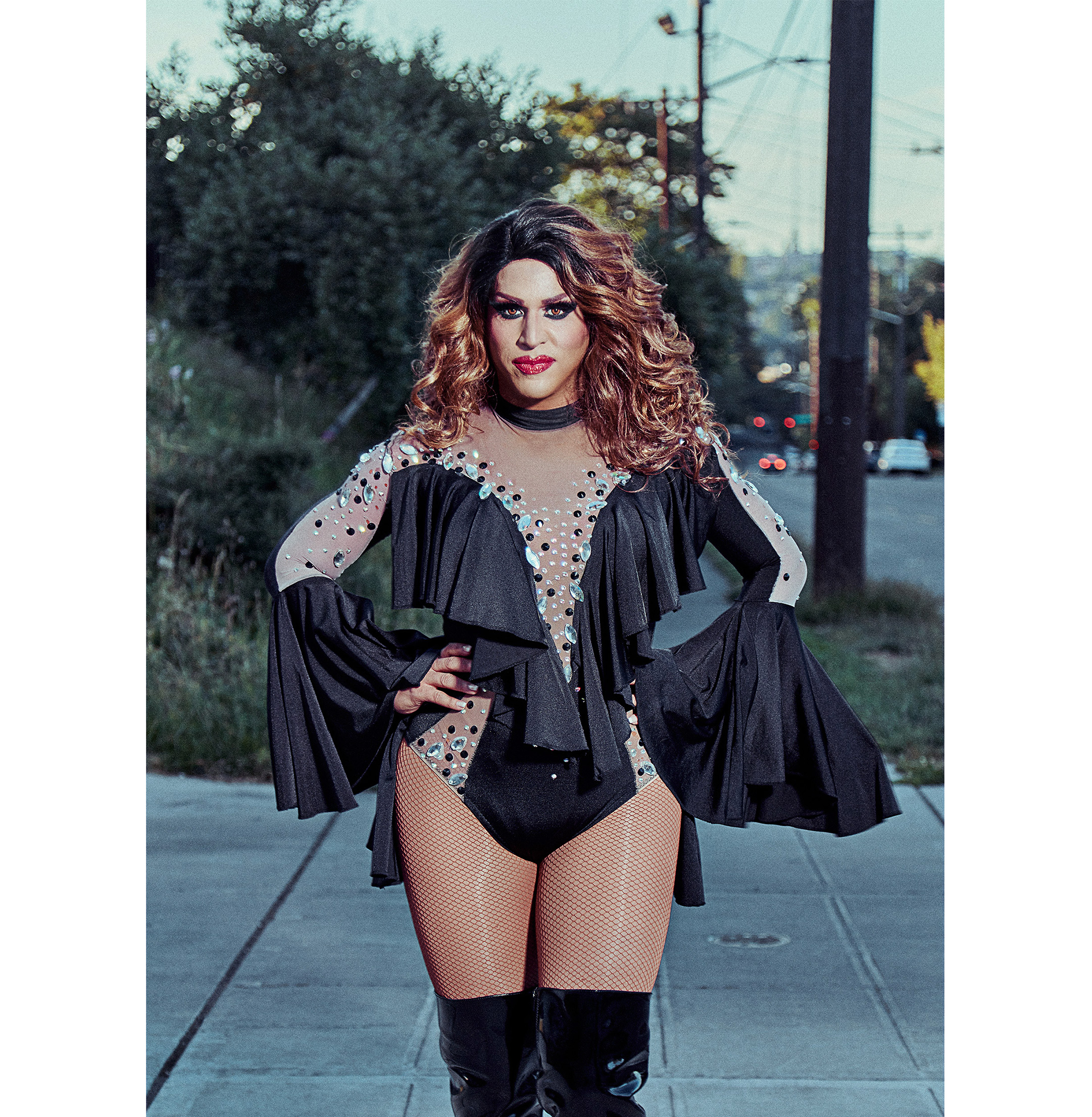 “I’m an artist because I love to have connections with people. It’s not because I want to be a woman, or because I want to be a queen or superstar. It’s because this art gives me the opportunity to touch hearts, to be with people, to make somebody happy, to inspire, especially the new generation. I’m feeling happy every time somebody comes to me and says. ‘Because of you, I came out of the closet.’” [Wild was a contestant on Season 2 of “RuPaul’s Drag Race.”] 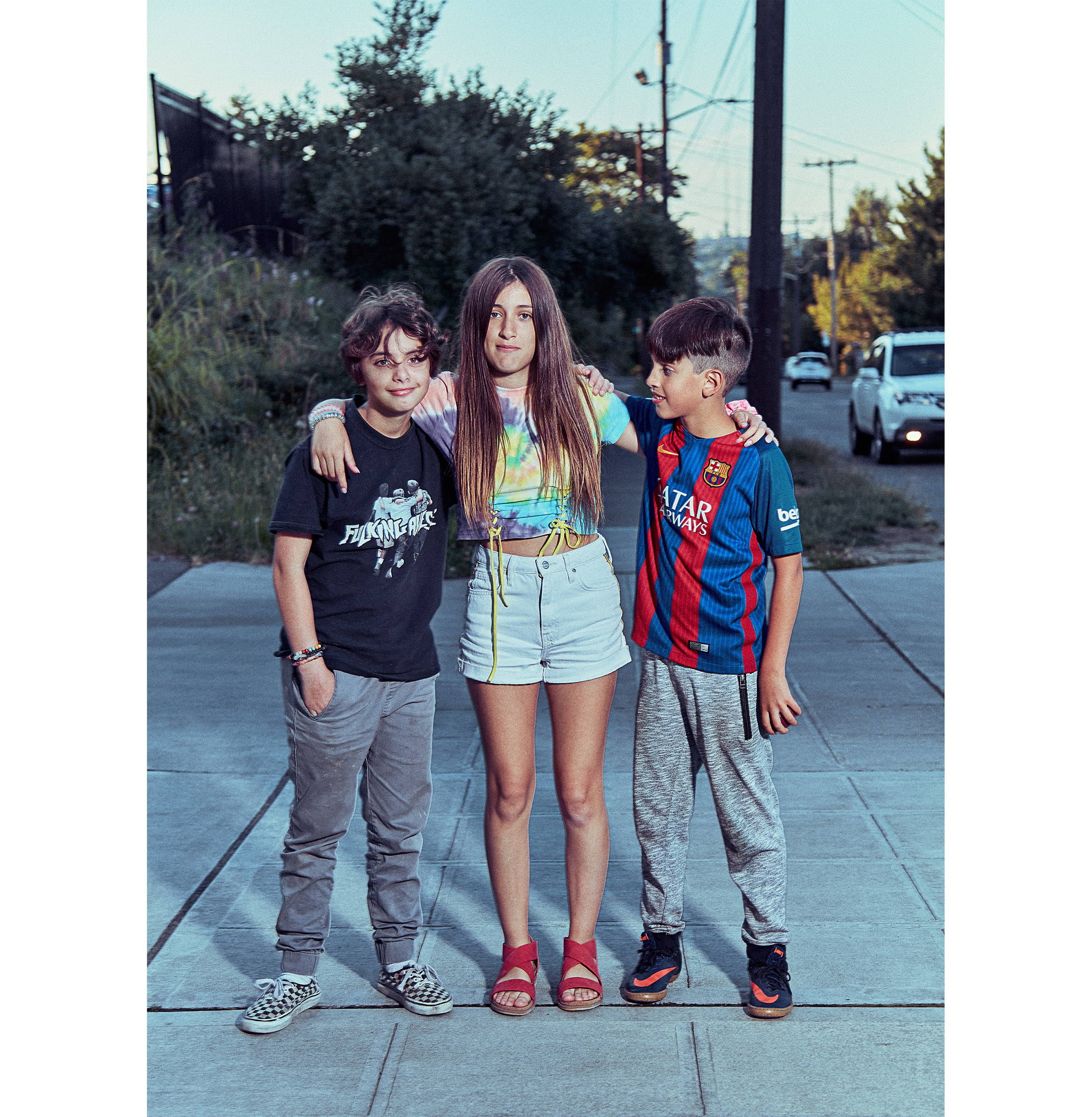 “I want my family to be a part of a wider idea of love, and respect and friendship with others. It’s really good that my kids are here having fun and being friends with amazing people that are doing good things for our community.” [Kids, from right to left: Sam Aders (friend of the family), 10; Angela Calderon, 13; Mateo Calderon, 10]

(they/them/theirs in drag, he/him/his out of drag, Seattle) 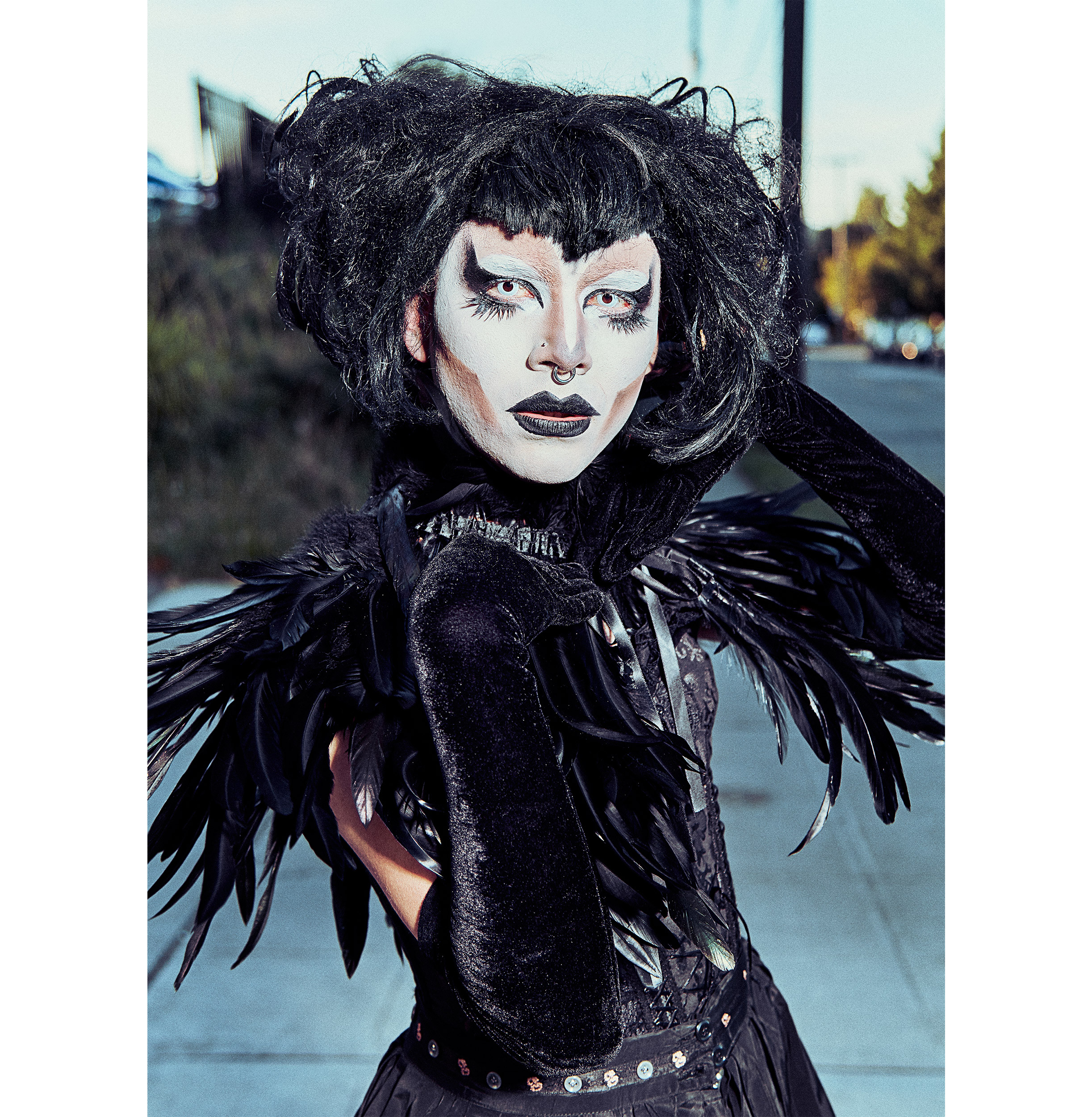 “To see the Latinx community come together in this space is so beautiful and I’m really honored to be a part of that.” 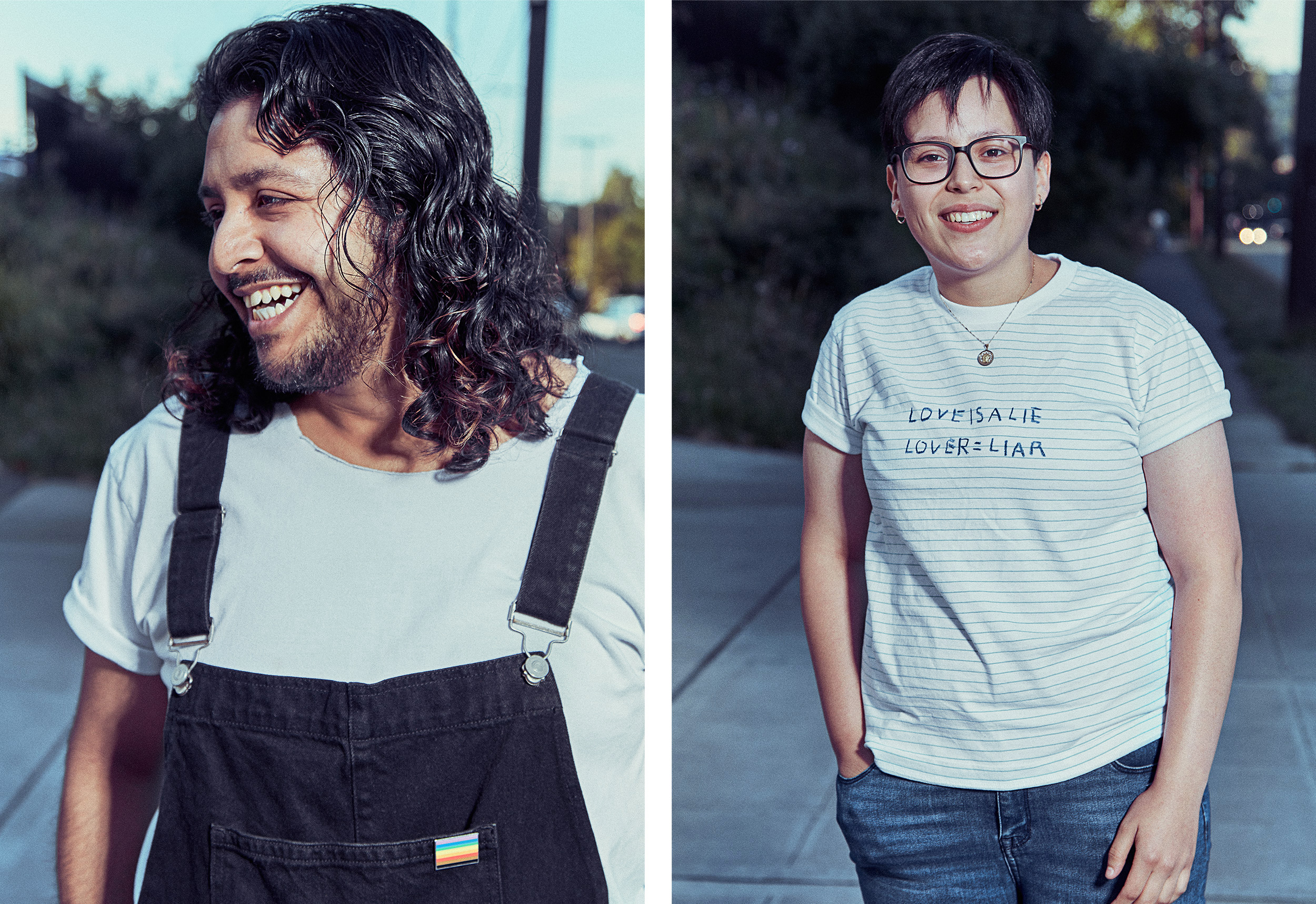 Bryan: “Usually when I go to events, it’s the white narrative (that dominates). To be in a space with so many beautiful brown faces and to be excited when I see my reflection is very different. [To Janet] She’s my younger cousin. I was like ‘Hey, you’re queer. Let’s go.’”

Julie Davidow is the staff writer for University of Washington Magazine. Quinn Russell Brown is the digital editor.