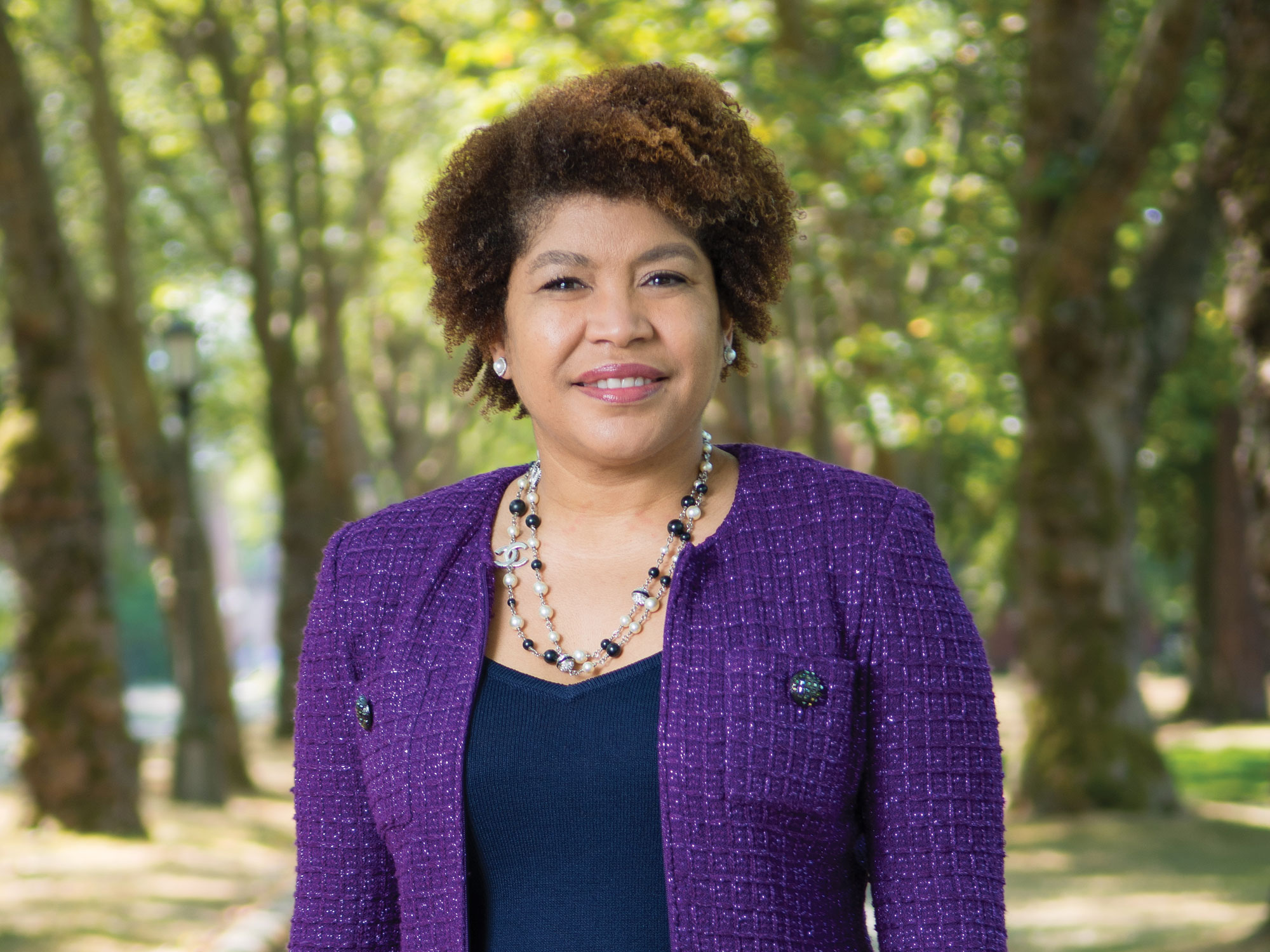 The UW’s new law dean, Tamara Lawson, brings both a record of academic and of fundraising success and real-world experience. Her scholarly work includes examining the trials and outcomes of the Trayvon Martin and George Floyd cases. Her expertise includes enforcement inequality in crimes against women and police brutality. She is also passionate about mainstreaming civil rights in law school curriculum.

“She’s amazing—obviously,” says law student Annalyse Harris. When Harris, then at St. Thomas, heard Lawson was headed for the UW, she transferred to follow her. “She is so intellectual. She encompasses so much more than just education. She advances equality and justice and always promotes an academic and innovative atmosphere. And she’s so personable. People love her.”

As dean at St. Thomas University in Florida she turned a financial deficit into a surplus, boosted enrollment by almost 40% and secured a $10 million donation, the largest in St. Thomas history. She also oversaw the retooling of the curriculum at the College of Law and founded the Benjamin L. Crump Center for Social Justice. During her 18-year tenure at the school, she taught courses in criminal law, criminal procedure and evidence and seminars on race and the law, twice earning professor-of-the-year honors.

Lawson was born in Los Angeles and grew up in California. She attended Claremont McKenna College and the University of San Francisco School of Law. Her work as a Clark County deputy district attorney in Las Vegas included the special victim’s unit for domestic violence. She also argued cases before the Nevada Supreme Court. Not long after completing a Master of Laws degree from the Georgetown University Law Center in 2003, she joined the St. Thomas faculty.

“We want to work together for this larger goal—of being the best public law school as measured by global impact.”

As Lawson started her new job at the UW this fall, she spent her first few weeks building relationships.

“Dean Lawson is quickly establishing herself as an engaged and visible leader,” says Provost Mark Richards. “She has met with members of the Washington State Supreme Court, UW faculty, staff and student leaders. In addition to exploring a philanthropic campaign to secure resources for scholarships, she plans to share her expertise with students by teaching a course on race and the law.”

Lawson sees UW law as a “good bones, good foundation” school with a community that wants to expand its diversity work. “As they say in the international world,” Lawson says, “there’s a coalition of the willing. And we want to work together for this larger goal—the goal being the best public law school measured by global impact and the programs that we have.”

The school’s current Asian and Indian law programs are great strengths, and the Ph.D. program is “unique in the country,” she says. There are other natural partners in the community for future growth in teaching and scholarship, she adds. “Our proximity to Asia and the benefit of technology right here in our backyard, these things are synergies that we have to maximize for the benefit of our students.”

Lawson has written and lectured extensively on legal issues, tackling troubling aspects of our legal system like police brutality, prosecutorial bias and stand-your-ground laws. Her pieces blend easily identifiable cultural references with tricky legal concepts. In one study, she looked at how TV shows like “CSI” are harming the criminal jury process.

She points to prosecutorial discretion as a problem in a legal system that requires lawyers to be experts in increasingly complex areas like race and civil rights. She has written about the legal cases surrounding the deaths of Martin and Floyd, whose killers received very different legal outcomes. Martin’s killer was exonerated, while Floyd’s will spend decades in prison.

“Not only do you have to deal with your objective facts, you also have to as an effective litigator deal with what’s truly on the mind of the jurors when they go in their room and deliberate,” Lawson says. “And so we saw a very different version when we saw the prosecution of Derek Chauvin for the Floyd allegation of murder.”

These sorts of distinctions are more obvious to those who have a varied law school experience, she says. Many American law students receive little or no training in the areas of race and social justice. Lawson would like to see that sort of coursework woven throughout the UW’s curricular tapestry.

“I do know that the faculty is very aware of the importance of these issues, as well as the University,” Lawson says. “The DEI work of the University of Washington is first class or model setting, I would say. And it’s part of what drew me to this particular school, because there’s a desire to impact justice.”

Lawson also blends an entrepreneurial background with her social justice and academic work. Her skills in negotiation and networking helped her connect Benjamin Crump, the prominent civil rights attorney who represented the Floyd family, with St. Thomas. He had no previous ties to the school, but Lawson engaged him in supporting a social justice center to train the next generation of social justice legal experts.

She plans to build similar relationships at the UW. “It’s important that we look at not only our alumni base and our existing donors to reinvigorate them and engage them, but we also need to bring in new partners and to make the case as to why it’s important that they should partner with us,” Lawson says. “I bring that entrepreneurial spirit to being a dean. And I think I’m unique among my peers, that I not only embrace the teaching, embrace the scholarship, but embrace the going concern of this business enterprise that we have for the benefit of the students.”