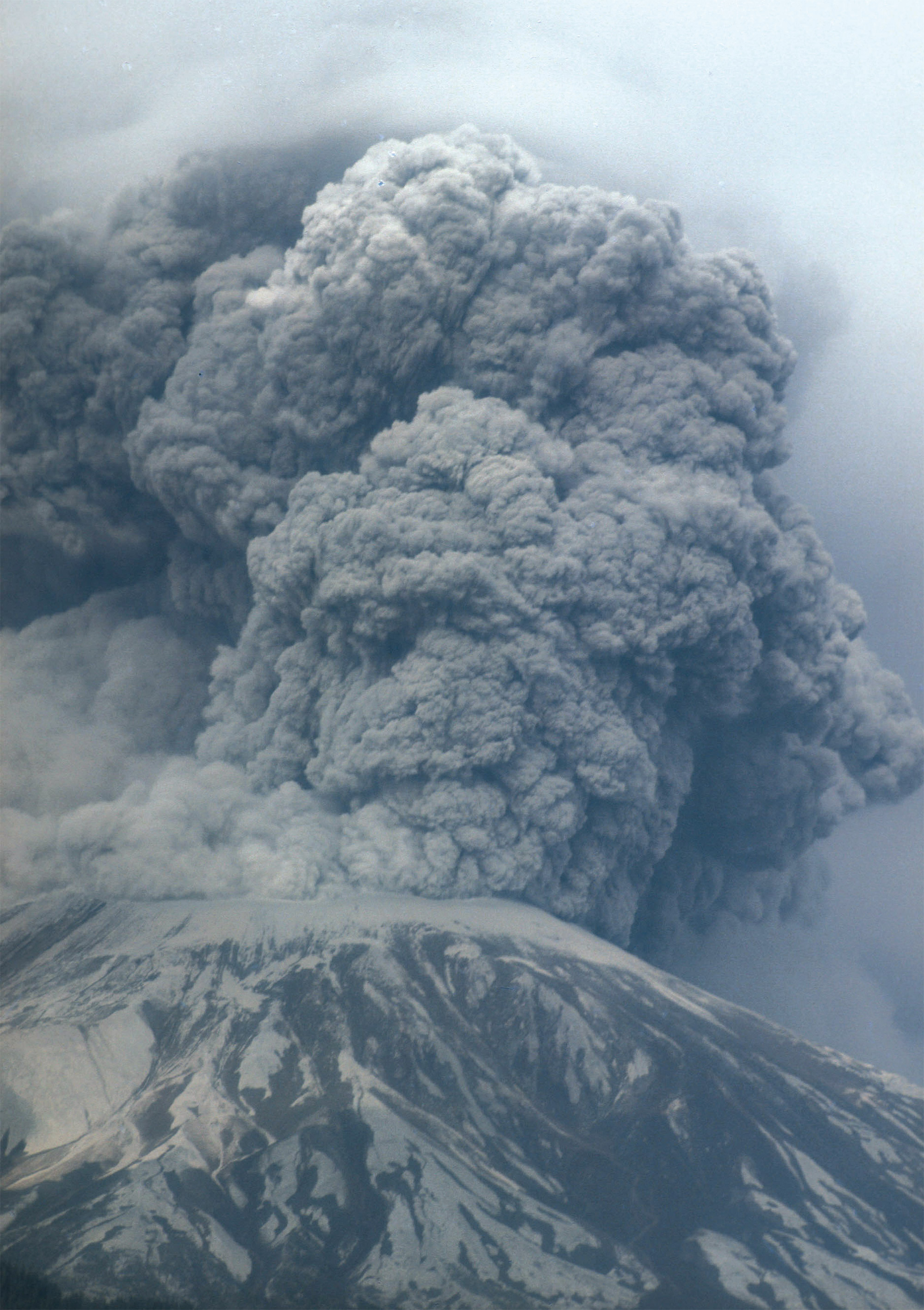 Scientists knew Mount St. Helens would come back to life after the 1980
eruption, but as a new book shows, its resilience still blew them away.

The following is an excerpt from the book “After The Blast: The Ecological Recovery of Mount St. Helens” by Eric Wagner, ’04, ’11.

The story of the eruption of Mount St. Helens as most of us know it begins with two prepositions, at and on, usually in that order and in quick succession: At 8:32 a.m., on Sunday, May 18, 1980, a powerful earthquake shook the mountain.

The summit rippled, churned and then collapsed as more than 2 billion tons of rock, snow and glacial ice fell away in the largest landslide ever recorded. The landslide took with it all the weight and pressure that had until then kept a bulging chamber of magma contained under the mountain’s northern flank. With that release, superheated water and gas both in and surrounding the chamber flashed to steam and burst out in searing clouds.

The clouds of steam and shattered stone raced over the land, obliterating the trees closest to the mountain and flattening others as they flew farther on. Mudflows followed as the mountain’s glaciers and snowfields melted. Called lahars, these flows swept down drainages and river valleys, swallowing boulders, trees, logging equipment, cars, trucks, trains, bridges and houses. From the heart of the mountain, meanwhile, a column of ash from the exposed vent rose 15 miles into the sky.

The main eruption lasted nine hours and caused the deaths of 57 people. When it was over, Mount St. Helens was 1,314 feet shorter. Where the summit had been gaped a crater a mile wide and 2,000 feet deep. In a 180-degree arc to the north, 234 square miles of forest were buried, knocked flat or left standing but scorched. The landslide traveled more than 14 miles down the valley of the North Fork Toutle River. The lahars went farther still, destroying hundreds of miles of roads and railways, knocking out twenty-seven bridges, damaging more than two hundred homes and clogging commercial ship traffic 75 miles away on the Columbia River. As it was blown east, the towering plume of ash blocked out the sun for miles. Several inches of ash fell in the city of Yakima within an hour, and streetlights flickered on at noon. Two hours after that, the plume reached Spokane, more than three hundred miles away. The plume eventually climbed to the stratosphere and floated across the U.S., dusting 17 states. In 15 days it had circled the Earth.

Back in the blast area, the sense of desolation was greater than mere statistics could convey. Mount St. Helens had always been the most beautiful of the Cascade peaks, its summit the most symmetrical. Gone now was that perfect white cone, the dark forests that had cloaked it, the deep, clear lake that had reflected it. In their place was a hollow volcano in a wrecked landscape of black and gray. When President Jimmy Carter toured the area by helicopter four days later, he could only marvel at the waste. “The moon looks like a golf course compared to what’s up there,” he said to a scrum of media when he returned. Local reporters were less glib. “Death is everywhere,” wrote one in The Oregonian. “The living are not welcome.” 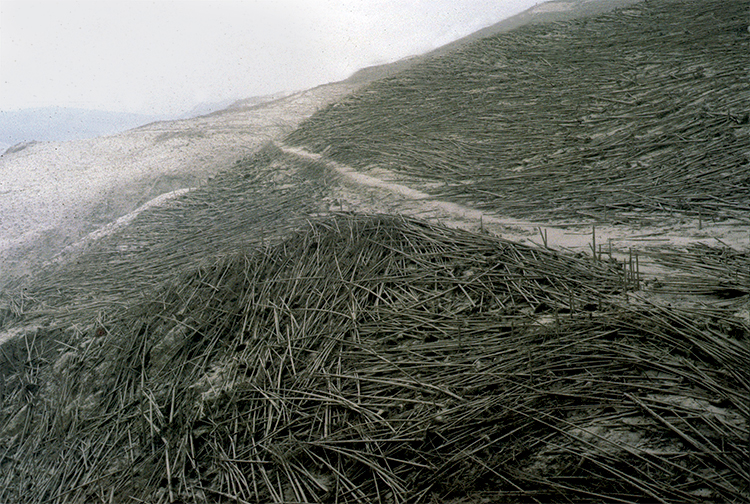 A couple of weeks later, on a bright morning in June, another helicopter lifted off from Vancouver, Washington, albeit to considerably less fanfare. Riding in it were Jerry Franklin, Jim Sedell and Fred Swanson. Franklin and Sedell were ecologists with the U.S. Forest Service, and Swanson a geologist also with the agency. The helicopter rose and turned northeast above the city and its suburbs. From there it crossed into Cowlitz County and flew over the Lewis River, which was still running gray-brown and high. Here the pilot turned to angle more to the north. Tracts of forest appeared, with stands of tall old trees next to short young ones, and brown patches of fresh clear-cuts between them: the checkerboard grid characteristic of the Pacific Northwest. Roads noodled in and among the squares like veins, but no one was looking at them. Their thoughts were drawn east, to Mount St. Helens.

The misshapen hulk of the mountain lay in the distance, still shrouded in cloud. Franklin, Sedell and Swanson gazed at it. The whup-whup of the helicopter’s rotors was so loud that it was impossible to hear anyone speak, but it did not matter, because no one had anything to say. The eruption had overwhelmed their professional vocabulary. They were flying toward something for which they did not yet have the language.

Franklin and Sedell were certain that nothing could have survived. The event seemed impossible, and in this way almost perversely exciting. In overwriting the landscape, Mount St. Helens had presented ecologists with what was in effect a huge natural experiment. It was as if the volcano itself had posed a question: What happens when every single living thing for hundreds of square miles, big and small, plant and animal, is burned away or buried, and nothing is left but rock and ash?

Franklin and Sedell had discussed the question at length in the weeks leading up to their flight, both between themselves and with their colleagues in Oregon, Washington and beyond. Their working hypothesis was that although it might take decades or even centuries, plants and animals were sure to return at some point. Here then was an unprecedented opportunity to document how living things crept back in from the outside world, to test on the grandest of scales some of the oldest and most durable theories in ecology and evolution about how life responds to a massive disturbance, how it recovers from one, or how it does not.

The helicopter neared the mountain and flew past the still-steaming crater. The pilot scanned the ground for a safe place to land, eventually settling close to Ryan Lake, about 12 miles distant. Franklin, Sedell and Swanson prepared to disembark. The safety officer, who was 6’ 4”, weighed over 300 pounds and had introduced himself as Tiny, reminded them that they did not have long to stay and were not to walk far. They might have to get out of there in a hurry.

So it was that Franklin opened the helicopter’s side door and hopped out. His boots sent up little puffs of ash when they hit the ground. He glanced down, but instead of the gray he expected, he saw a bit of green poking up next to him. He knelt. It was a plant shoot, maybe 2 or 3 inches tall. I’ll be damned, Franklin thought. It was Chamaenerion angustifolium, a plant much more widely known by its common name, fireweed. 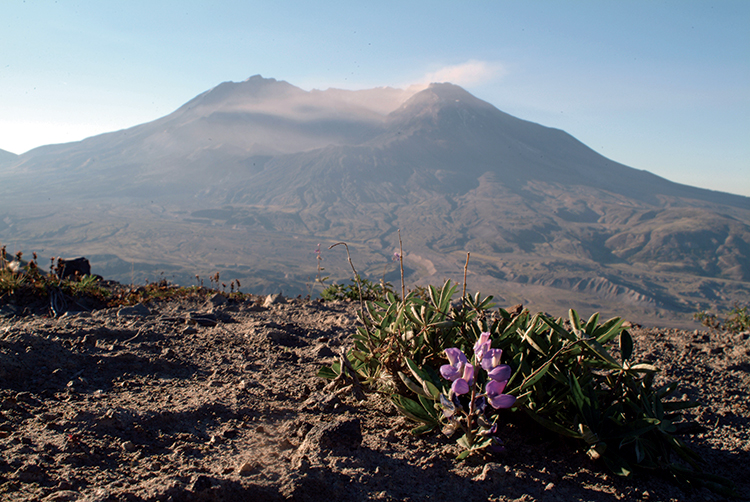 Fireweed is a common perennial plant in the evening primrose family. It ranges across much of the temperate Northern Hemisphere, from sea level to subalpine meadows to altitudes as high as 15 thousand feet in the Himalayas. Individual plants can grow up to 9 feet tall, but most are closer to 3 feet. Their leaves are long, narrow and pointed, like spearheads. Their small flowers grow in dense clusters, and the petals may be pink, red or purple, or sometimes all those colors at once, depending on the play of sunlight and wind.

Fireweed can spread through the soil by means of a system of roots that lie a few inches beneath the surface. If the stalk above the ground has been damaged, the plant can regrow from as little as an inch or two of remnant root. The stalk itself grows quickly, up to 1 inch per day. Mature plants can also produce tens of thousands of seeds. Each is topped with a cottony tuft of fine white hairs to help the wind carry it away, sometimes for miles. Fireweed thus can travel across long distances. Botanists describe the species as aggressive; to some gardeners, it is a pest.

Pest or not, fireweed gets its American common name from its habit of being one of the quickest plants to sprout in newly burned forests, clear-cuts and any place that has been suddenly and drastically denuded. It thrives in habitats with bare soil and a lot of light. In England, the species is called rosebay willowherb, but is also known informally as bombweed, since it was often the first flower to appear in blast craters after German air raids during World War II. “London, paradoxically, is the gayest where she has been most blitzed,” wrote one American journalist in 1944. “The wounds made this summer by flying bombs are, of course, still raw and bare, but cellars and courts shattered into rubble by the German raids of 1940–41 have been taken over by an army of weeds which have turned them into wild gardens.”

Now Franklin considered this fireweed sprout so close to Mount St. Helens. It could not have come from a seed; fireweed would not set seed for a couple of months yet, near the end of summer. It had to have come from a piece of root that had somehow survived under all the ash and debris. He imagined the new shoot emerging from the root fragment, pushing up through the ash once the ground had cooled. He imagined the probing spread of the slender tendrils below, the slow and tenacious unfurling of bud and leaf above, the eruption of the flowers, the establishment of the plant.

Franklin stood and took in the landscape again. He realized that this fireweed was one of tens, hundreds, maybe even thousands of little green shoots emerging from the ash. He saw the beginnings of pearly everlasting and thistles. More than plants, he noticed evidence of other forms of life. Beetles were scuttling over the downed trees. Ants trooped along the ground, leaving trails of dimpled footprints. Dark mounds of dirt showed where a pocket gopher must have pushed up from its subterranean tunnels. Roving herds of ungulates—elk, probably, judging by the size of the hooves—had already planted prints in the ash as they picked their way through the tangle of trees.

Franklin clambered over the trunks—how hard it was to get around!—and stumbled toward a stream that was working its way through the ash to the old surface. The water was almost clear and a film of algae was starting to spread in it. He was astonished, elated. “Right off,” he said later, “all of us smart ecologists realized we didn’t have the correct working hypothesis.”

Eager to learn more about Mount St. Helens? Author Eric Wagner will be speaking about his book “After the Blast” at Dawg Days in the Desert on March 19 at the Rancho Mirage Library and Observatory in California. UW Libraries will have an exhibit called “Blast!” in Special Collections from April 6-Aug. 14, 2020.