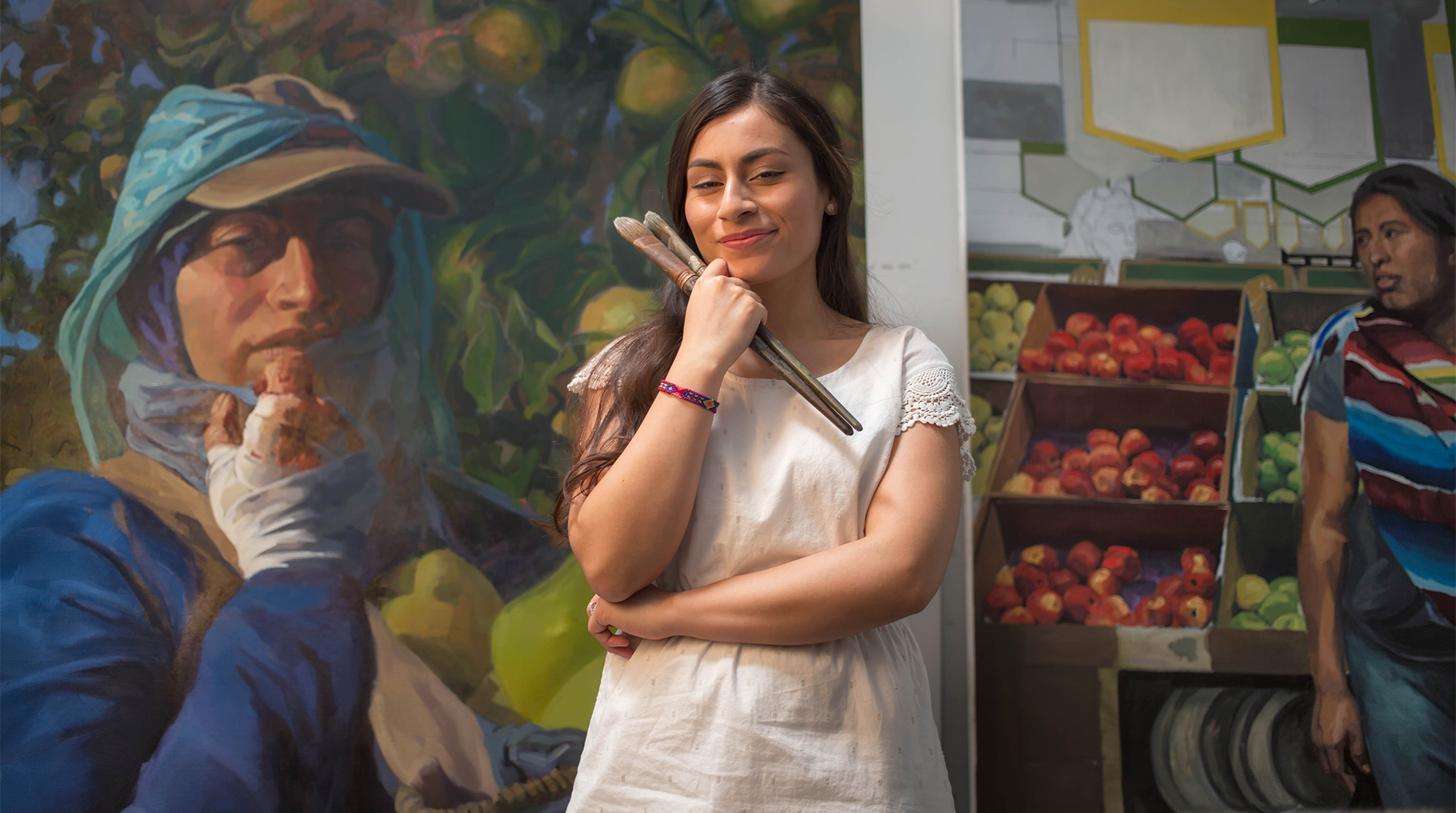 Morales, a fine arts graduate and DACA recipient, took inspiration from Latino artists and a poet in developing her style.

In a white-walled studio lit by an opaque skylight, UW graduate student Arely Morales rendered her MFA education into three imposing, radiant portraits of Latino laborers whose humanity will not be overlooked.

In “Juan Jose, 2017” a man smudged with dirt and fatigue fixes a long stare as he balances a heaping tub of tomatoes on his shoulder. In “Guadalupe, 2017” a sweating woman with a solemn gaze stands against a background of orange and yellow Huichol designs, her dress echoing the patterns and colors. In “Arely, 2017” an apple picker standing between a basket of apples and a line of trees holds up her wrapped and bloodied hand, either covering or uncovering her face with a protective kerchief.

A Mexican-sky blue and each subject’s unapologetic gaze tie the 5-foot-by-5-foot paintings together.

They are stunning statements about Mexican and Central American people who migrate north to work in grueling environments. Especially enveloping is the apple picker, for whom the artist used her own likeness. She has never been a farmworker but she is a Mexican immigrant—a DACA student in the era of Trump—who honed her artistic voice at the UW by telling the stories of people from Latino cultures.

“With all of them I wanted them to stare right at the viewer,” Morales, ’17, said in an interview at the Henry Art Gallery, where her paintings hung during the MFA exhibit last spring. “My intent was for them to confront whoever was going to see them. To become more visible and not shy away.”

Whether the stare is wanted or not, she said, “I feel like something begins to happen when someone is looking at someone. I want these workers to be more visible. I want people to know them.” Some of Arely Morales’ paintbrushes in her Seattle studio. Behind them is a painting in progress.

The striking portraits represent two years of transformation for the 27-year-old artist whose work moved from literal to symbolic, dark to bright (think Caravaggio to Kehinde Wiley) and from culturally nostalgic to socially pointed.

UW Professor Zhi Lin, whose own recent artwork centers on reinserting Chinese railroad workers into the U.S. historical narrative, said Morales’ work is not politically militant, “because ‘militant’ becomes a poster.”  But she came to the UW with something to say and left saying more, more clearly.

“It’s not that she became politicized,” Lin said. “Society turned so political and really ugly. It wasn’t her choice. We must face it.”

Morales graduated with honors from the School of Art + Art History + Design in spring, earning the department’s de Cillia Graduating with Excellence in Research award. She is now in Nacogdoches, Texas, teaching drawing at her undergraduate alma mater Stephen F. Austin State University.

The paintings evoke the same emotions that compelled Morales to elevate her subjects in the first place, emotions fed especially by the work of Los Angeles-based artist Ramiro Gomez and the poetry of former U.S. Poet Laureate Juan Felipe Herrera.

Gomez uses life-size cutouts and stark paintings on cardboard to humanize specific laborers in specific locations. “He is so passionate about making these workers visible—I want to be like that. I want to add to that,” Morales said. “His work totally touches me. And in my work, I hope that feeling happens, too.”

“Oh my gosh, it’s one of the best things that has happened to me in grad school,” she said of discovering the poems. “When I am reading them, I completely have a vision. I see the people he is talking about. I imagine what he’s talking about. He has that power. Not just knowledge—you can see it. “

Morales immigrated to Texas from Tlajomulco de Zúñiga, Jalisco, Mexico, when she was 14. “Tlajomulco” is translated from the Nahuatl as “town in the corner,” but Morales said everyone there translates it as “town surrounded by mountains.” Seattle—distantly ringed by the Cascade Mountains to the east and the Olympics to the west—reminds her of her birthplace. The mountains and the rain. But she wasn’t always comfortable in Seattle, artistically or personally.

“There were times when I was a little depressed and guess it reflected in what I was doing—my paintings were really dark and gray and I felt like I didn’t know who I was at some point,” she said.

Arely Morales with studies from “Guadalupe,” the oil on canvas behind her.

But then a trip to Texas during summer break helped lift the blinds. “It was a moment I needed to reconnect with who I am, and then these happened,” she said, pointing to the portraits. “That trip back home really helped me remember who I am.”

From Lin’s perspective, frustration and discomfort are part of the process. In undergraduate art studies, students often gravitate to one or two people and hew closely to their teachings. “But here, coming to our campus, she learned this is a total open process,” Lin said.  “It was kind of frustrating—she heard one thing, and then another and then another and another—six, seven or eight different directions—and then had to figure out how to put them together.”

All faculty members teach the MFA students equally, according to Lin, and graduate-committee chairs rotate throughout the students’ two years. This has a pedagogical purpose: “Once they get out of school the world is so diverse, and how will they synthesize different points of view,  how will they take punches and analyze praise?”

Back home in Texas, Morales intends to continue her research in the fields and with workers in their environments. She’s also interested in exploring her own experiences with subtle and overt racism, perhaps a perilous endeavor in conservative Texas, especially compared to liberal Seattle. Here she found a receptive public for her work. “I am a little worried about how things will go in Texas,” she said as she was about to roll up her canvases for the journey back to Nacogdoches.

Yet, as she summed up the key points that will propel her to the next phase of her life, she focused on what she has to offer her students, especially how to turn challenges into artistic, personal and professional growth.

“I know more who I am today because I had to explain myself so many times to my professors,” Morales said. “I used to feel insecure about speaking English, but here I overcame the fear of being different. I am not a citizen, but I still can feel things and say things.

“Knowing who you are helps you know what you are trying to do; it helps you defend yourself in the world.”

To see one of Morales’ paintings in person, head over to the HUB this fall.

Andrea Otanez is the guest editor of the Fall 2017 issue of Viewpoint Magazine. A former assistant metro editor at The Seattle Times, she is a lecturer and the journalism-program coordinator in the UW Department of Communication.