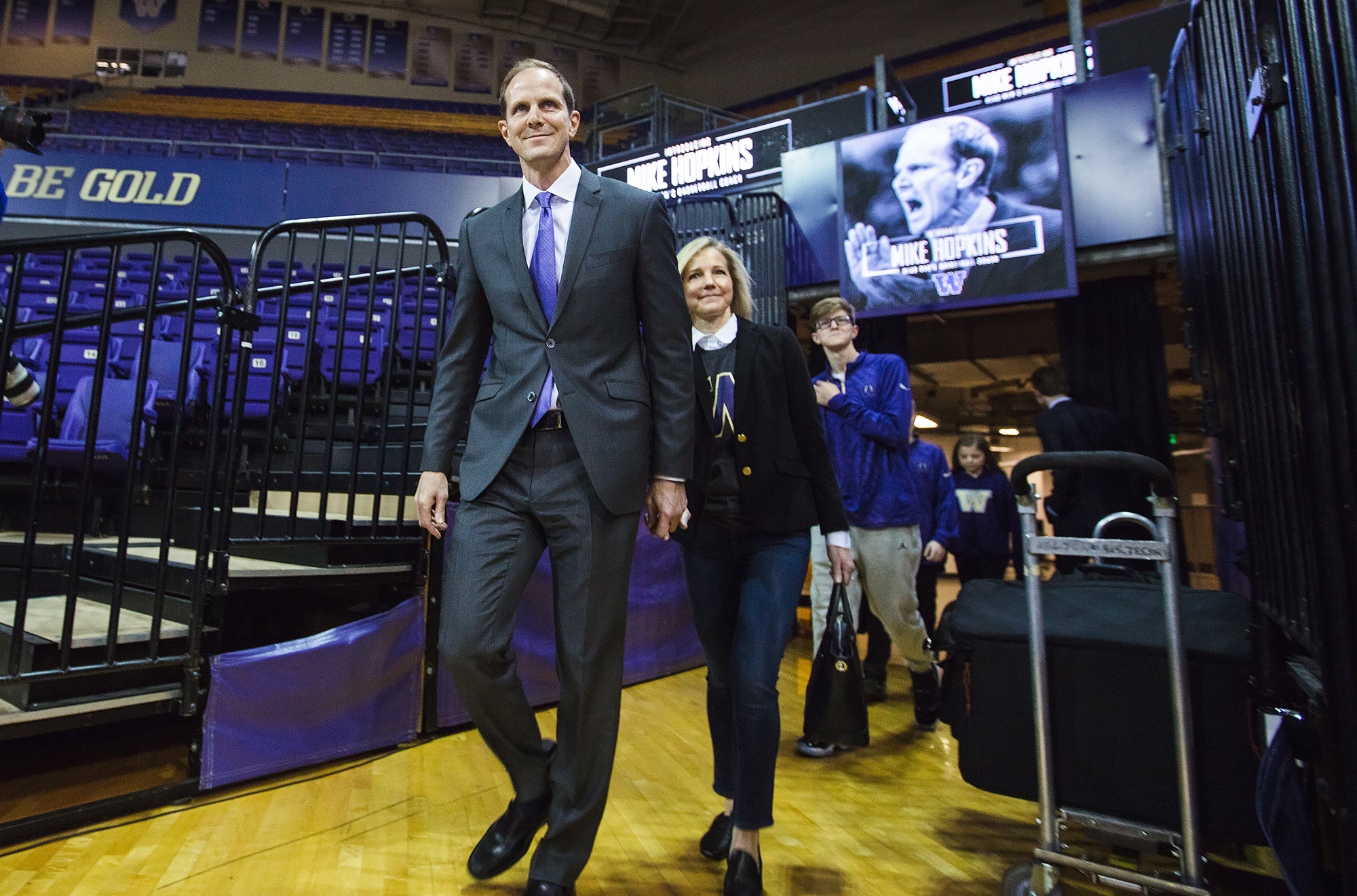 For a moment, it sounds like game time as the coach walks out of the tunnel and onto the court. The Husky Marching Band roars, cheerleaders raise their pom-poms to the rafters and the crowd sits in suspense as Mike Hopkins, the Huskies' new men’s basketball coach, introduces himself to UW at Alaska Airlines Arena on Wednesday afternoon.

“This dream has been a long journey,” says Hopkins 47, a two-decade veteran of the Syracuse University basketball program. He thanks his high school coach Gary McKnight (“He made me a man”), SuperSonics Assistant Coach Tim Grgurich (who trained Hopkins when he was as a player), and Duke Coach Mike Krzyzewski (who tapped Hopkins to help coach Team USA for the past eight years).

Hopkins chokes up when he mentions Syracuse Coach Jim Boeheim. “My mentor, my friend, and father figure,” Hopkins says, pausing for a few seconds. “(He) gave a guy an opportunity when a lot of people didn’t.”

Credited with recruiting and developing a handful of NBA players at Syracuse, notably future Hall of Famer Carmelo Anthony, Hopkins had become Boeheim’s heir apparent. But when the Washington opportunity presented itself, Hopkins jumped at the chance to build a legacy of his own.

He takes over after the dismissal of Lorenzo Romar, who had a 298–195 record over the past 15 years. And Hopkins knows that this is a heady opportunity.

“I have so much respect for Coach Romar. I know him (from) way back,” Hopkins says. “(He has) the highest character of anybody I’ve ever met, great basketball mind, and a great person.” Hopkins adds that Romar brought the program to great heights “not only as a coach but as a player.”

But Hopkins sees the UW as a school that can reach even higher—one that can compete for a national championship. He wouldn’t have taken the job, he says, if that wasn’t the case.

“It’s not going to be easy,” Hopkins says. “It takes everybody—it takes the fan base, it takes the alumni—to be a part of a winning program.”

UW decided on Hopkins just four days after parting ways with Romar. The new coach has agreed to a six-year, $12.3 million contract. Before Hopkins took the podium Wednesday, Athletic Director Jennifer Cohen described the qualities that the program was looking for in a new coach: Someone who had been part of a championship program (Syracuse won a title in 2003); who saw UW as a destination and understood its potential; and who had a passion and a vision that aligns with the UW’s values.

“We have some work to do with this program,” Cohen admitted. And that’s why she believes Hopkins is a fit: he has a builder mentality, she said, and he can create a championship culture.

“The thing I’ve learned in business over all this time is that there’s no guarantee in any hire you make, but the best shot you have at success is hiring somebody that’s a cultural fit for your organization,” Cohen said. “When we met Coach Hopkins, it didn’t take long to realize that he embodied everything that we were looking for in our next head coach.”

Hopkins, whose parents are from Washington, grew up in California and vacationed at Lake Chelan as a kid. He played four years at Syracuse (1989-93) and joined the Syracuse coaching staff in 1995.

Near the end of the Q&A with Hopkins, a reporter finally broaches the subject that’s been hanging over the coaching transition: the status of UW commit Michael Porter Jr., the nation’s top-ranked high school player, who requested to be released from his letter of intent on Wednesday afternoon. Porter, a senior at Seattle’s Nathan Hale High School, had committed to play at the UW for Romar, but he is now widely expected to decommit.

“We’re definitely going to be sitting down and meeting with the Porter family very soon, maybe even today,” Hopkins says. Michael Porter Sr. was on Romar’s staff last year.

Porter and his family—which includes a younger brother, Jontay, who decommitted from UW last week—relocated to Seattle in 2016. While Romar became known for his recruiting prowess, signing Seattle-area players like Brandon Roy and Isaiah Thomas, the UW has struggled to consistently attract local talent. In recent years, the program missed out on homegrown NBA players like Zach LaVine (UCLA), Avery Bradley (University of Texas) and Aaron Brooks (University of Oregon).

When asked what he would do to attract this local talent, Hopkins warns against being wooed by rankings. He told the story of Hakim Warrick, a fan favorite at Syracuse who went on to have a long NBA career. Warrick only got a spot on the Syracuse roster because Julius Hodge, a top-5 recruit, turned it down to attend North Carolina State.

As Hodge was in the process of making his decision, Warrick waited on Syracuse instead of considering other programs. Hopkins says Warrick’s mother called him every day, that she prayed Hodge would go somewhere else. When Hodge finally settled on NC State, the Syracuse fan base was devastated. “It was like an upper cut and a hook—it just took ’em out,” Hopkins says.

Meanwhile, Warrick was offered a scholarship at Syracuse and went on to become a two-time All-American, winning a championship for Syracuse in 2003 (granted, he did so alongside Carmelo Anthony, the top-ranked high school recruit from 2002).

For Hopkins, that provides a lesson. “You’ve got to get the right fit. The values have to align—just like what you see up here,” he says, gesturing to himself and Cohen. “That’s what it takes to be successful.”