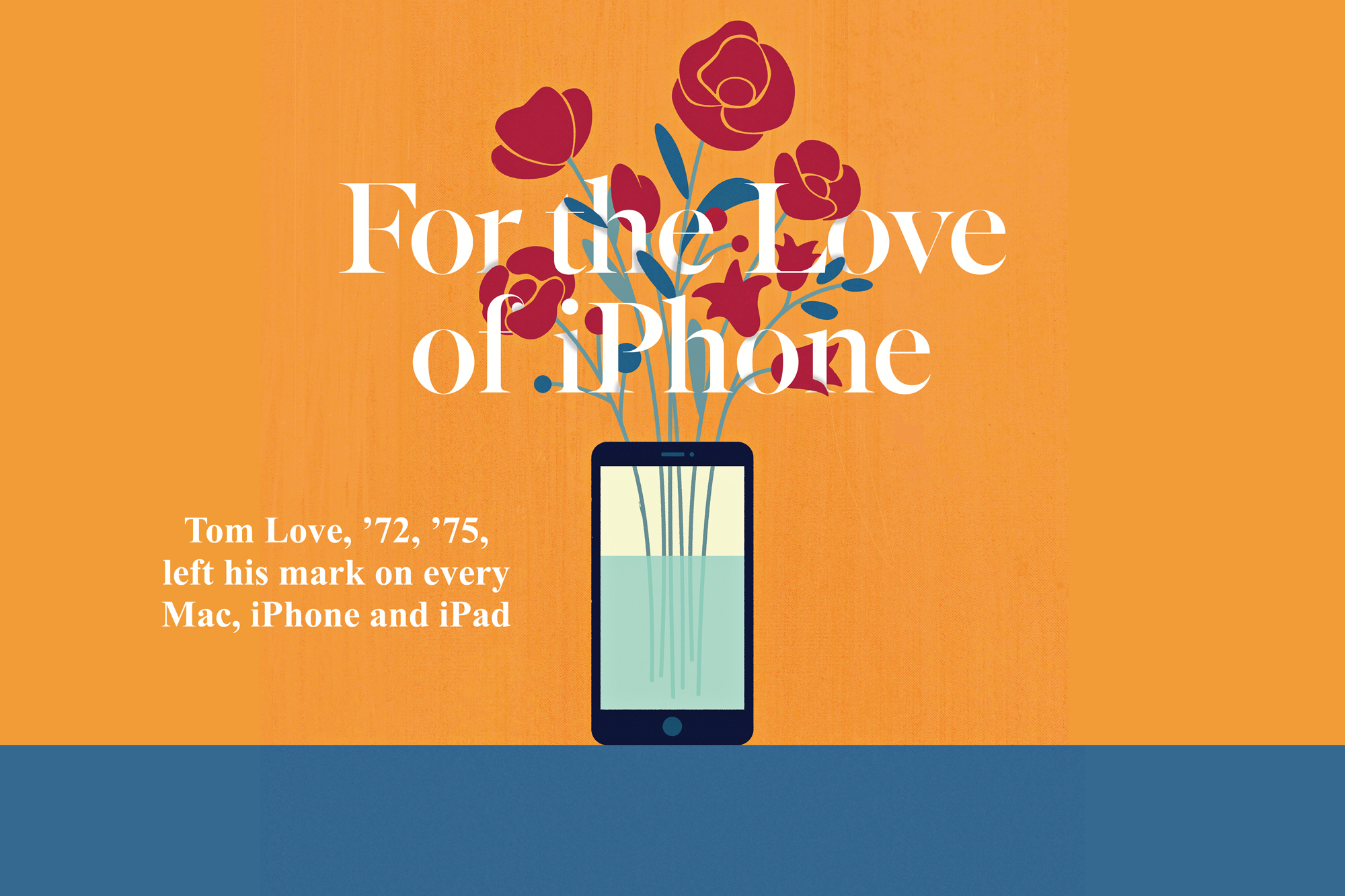 Talking with Tom Love is like taking a tour through the early days of software development. During his career, he has worked for or consulted with some of the world’s largest organizations: GE, ITT, Morgan Stanley, the Veterans Administration Hospital System.

But everyone wants to know about the time he and his business partner, Brad Cox, sold a new programming language to Steve Jobs, which ultimately became the backbone for every Mac, iPhone and iPad in the world.

“Once upon a time, we went to a computer show in Los Angeles,” says Love, ’72, ’75, a natural raconteur. It was 1985, at one of those cavernous software conferences, and a guy from a brand-new computer company called NeXT walked up to the booth that Love and Cox were manning. NeXT was started by Jobs after he was ousted from Apple and before Apple bought NeXT, rehired Jobs and changed the world in profound and dramatic ways. The NeXT employee was interested in what Love and Cox had done, which was to extend and expand the programming language C into a language called Objective-C.

“He came back an hour later and said Steve sure would be interested in knowing more,” and he invited them to the newly opened NeXT office in Palo Alto. “We arrived on a Tuesday, and they had opened the doors on Monday,” Love says. “I guess one could call that a ground-floor opportunity.”

It started with pigeons

How did Love, who received his master’s and doctoral degrees in psychology at the University of Washington, find himself in such a promising position at such an opportune time in the history of computers?

It started when he was an undergraduate in the late 1960s at the University of Alabama in Tuscaloosa, not far from the tiny town of Aliceville, where Love grew up. Love wanted to know how the mind works. To do this, he learned to program electric relay switches, the precursor to circuit boards, “so we could train pigeons to peck when a light came on, and things like that.”

His application to graduate schools listed this electromechanical programming experience, which caught the eye of Earl “Buz” Hunt, chair of the psychology department at UW at the time. “Earl was studying memory and cognition, and he wanted people who could do computer-controlled studies of human memory,” Love says. The two struck up a friendship, often spending winter weekends cross-country skiing in the mountains near Seattle.

Once he was working in Hunt’s lab, Love proposed a different tack to their research. “I walked in one day and said, ‘Buz, we’ve been making a lot of progress with this memory study, but if you told me to study basketball players, I wouldn’t go to the local gym, I’d go to the NBA,’” Love recalls. He told his mentor, “If we’re going to study memory, why don’t we find somebody who’s good at it and study them.”

“He’s really good about talking to executives about what they ought to be doing and why what they’re not doing isn’t good.”

Love’s office mate suggested he talk with the husband of one of their fellow students, an accomplished chess player by the name of Viktors Pupols, an American chess master. “I knew he was pretty good; I didn’t know he might have been the premier chess player on the planet at the time,” Love says.

Two years later, Love had done a number of studies with this fellow, who “had the first- or second-best memory of anyone whose memory had been studied,” he says. In the last year of his doctoral work, Love started looking for a more employable skill than studying chess players.

Hunt had read a magazine article on structured programming, the notion of making programming easier to write, understand and use—basically making it more efficient. Hunt told Love, “If you started studying computer programmers instead of chess players, and how they were structuring their programs so they’re easier to read and modify, there’s got to be a computer company that’s interested in you.”

That’s exactly what Love did. “I went to the heads of the engineering and computer science departments and said I wanted to understand the characteristics of the students that make some of them really good and a lot of them not very good at all.”

The work became Love’s dissertation and led to his first job, as founder of a software psychology group at GE. After a few years there, Love was recruited to start a software research group at ITT, which was still in the telecommunications business at the time.

While at ITT, Love hired a fellow Southerner with a similar background, a programmer named Brad Cox. He had grown up on a dairy farm in South Carolina and went on to earn a Ph.D. in mathematical biology from the University of Chicago.

Cox walked into Love’s office one morning after reading about objective language in a magazine and said he thought he could improve upon one of the most common computer languages of the day, called “C.” He persuaded Love to let him take a computer home, which wasn’t as easy as sliding a laptop into a backpack in those days; Etta Glenn, Cox’s widow (Cox died in January 2021) says it was as big as a coffee table.

Two weeks later, Cox emerged with a new language, Objective-C. Over the next year or more, Love started his own company, attracted venture capital and started selling the new language to companies such as Hewlett-Packard.

“Tom was the bridge and Brad was the engine room,” says Bill Curtis, who taught statistics in the UW psychology department when Love was working on his doctorate. He served on Love’s dissertation committee, and Love later hired Curtis at GE and at ITT. “One of Tom’s great skills is getting people excited about what’s next,” Curtis says. “He’s really good about talking to executives about what they ought to be doing and why what they’re not doing isn’t good.”

Objective-C was one of the first widely accepted object-oriented languages, says Bryan Catron, an instructor in computer science at Furman University, who taught the language in an app development class as recently as 2014. Swift, the language currently used to program iPhones, and Java, another popular programming language, are both rooted in Objective-C.

With Objective-C, “you see the world as it is,” Catron says. This new ability led to desktop interfaces that allow users to manipulate computer files as they would real files. What made Objective-C enduring, Love says, is its simplicity. “It was a pure superset of C. We didn’t change anything that was already there,” he says. “Had we designed the language so that it was a variant of C with a unique syntax, it would have failed for sure.”

After a series of meetings and negotiations, NeXT agreed to use Objective-C to build its operating system, and offered to license the language for a per-unit cost: $5 per device. But the board of Love’s company was made up of venture capitalists, not programmers. They wanted the return on their investment in a cash settlement, not tied to a potentially risky sales figure.

According to an Apple Insider article titled “The Most Successful Failure Ever,” NeXT computers sold 50,000 computers. But when Apple, which was already using Objective-C, bought NeXT in 1996, it rehired Steve Jobs. Objective-C became the language for Jobs’ new vision of consumer electronics—iPads and iPhones. From 2007 through 2018, more than 1.46 billion iPhones were sold worldwide. In the second quarter of 2020, Apple sold more iPhones in the U.S. than ever: 15 million.

In a 2011 interview, Love was asked how it felt to be the co-creator of a computer language that spurred a revolution in software and touched so many lives. “It would feel better if the $5 contract was signed,” Love says, only half joking. He had a falling-out with his board over the lost deal and left the company. “It still stings,” he says.

Now mostly retired in Virginia’s rural Shenandoah Valley, Love takes pride in straw-bale gardening, which like Objective-C  is simple and straightforward but yields huge results. “It’s a really good way to make friends with your neighbors,” he says. “I wander around in August and say, ‘Would you like 50 pounds of zucchini?’”

“I would say I’ve spent much of my career searching for things like straw-bale gardening,” he says. “Whether it’s a simple way to manage a software development project or a simple and effective way to manage a garden.”

Clinton Colmenares is director of news and media strategy at Furman University. This is his first article for University of Washington Magazine.