Myles Gaskin goes out in style

After four seasons and more than 5,000 yards, the kid from Lynnwood is the best running back in Husky history. And he's not about to stop running.

When they were students at O'Dea High School, Myles Gaskin and his older brother Ivan would ride the bus from their home in Lynnwood. Joining them on the bus was their mother, Robbie, who works near O’Dea as a program manager of vital statistics for King County Public Health.

Every morning on the bus, “We both would literally pray, not only for a college scholarship (for ourselves) but that the other one got a scholarship, too,” Ivan says. “I prayed for his, he prayed for mine and my mom would pray for both of ours.”

Ivan received an academic scholarship to Atlanta’s Morehouse College, where he majored in computer science with a minor in math. Myles received a scholarship offer to play football at the University of Washington. Only that wasn’t what he had in mind.

So are the Huskies and their fans. Gaskin, who rushed for 1,302 yards his first season, the most ever by a UW freshman, became the Huskies’ all-time leader in rushing yards with more than 5,000 and scored a school-record 55 touchdowns as Columns went to press. For a school that has produced so many terrific running backs, the 5-10, 194-pound senior stands alone at the top.

As his mother Robbie says: “We’re glad he’s here and we’re here and that he’s had the support at the UW. He continues to grow as a young man and continues to do the best that he can.” 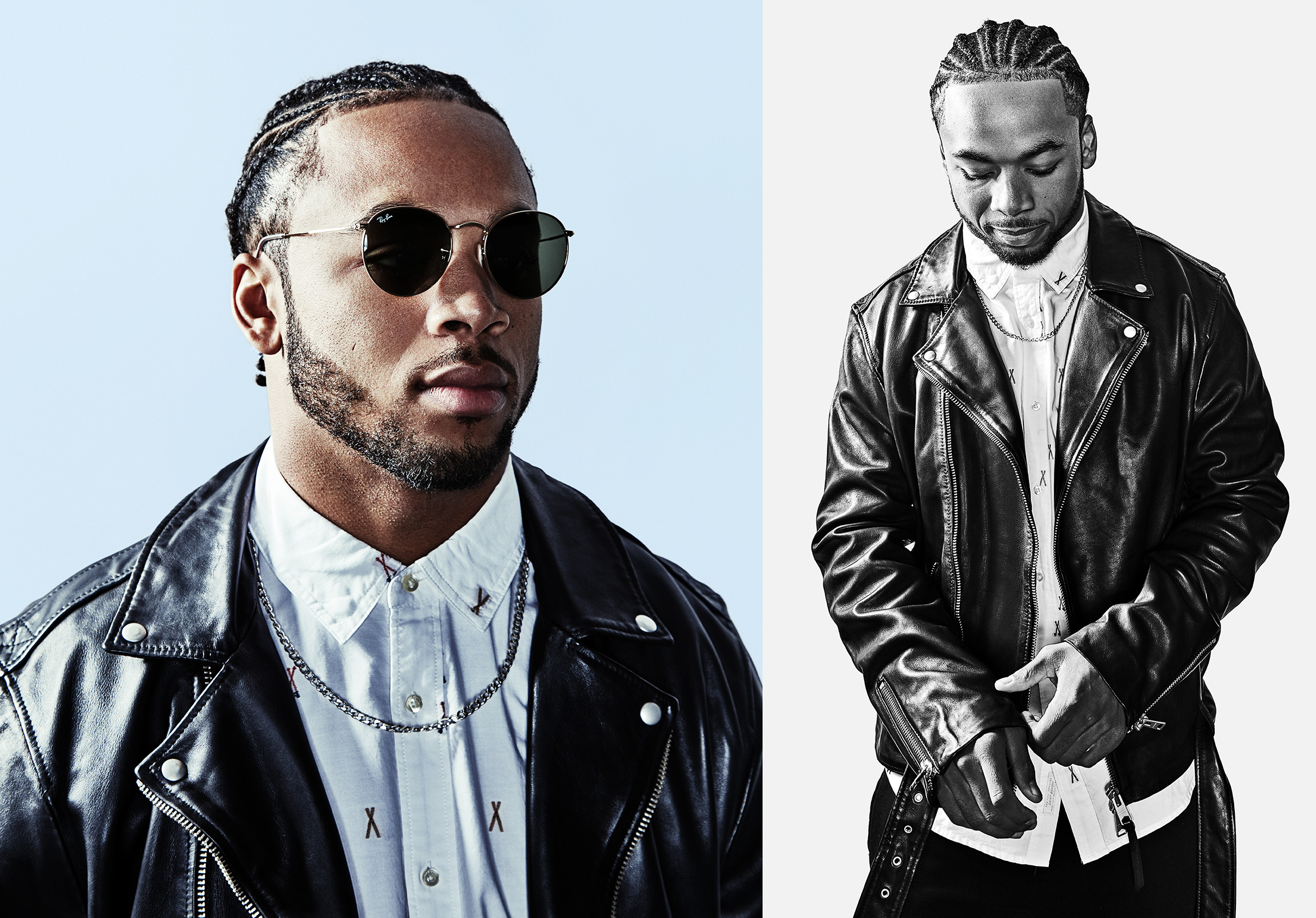 Who is the best running back in Husky history? That’s a tough one. There’s Hugh McElhenny, ’52, who held the career rushing record for almost 30 years. And Joe Steele, ’80, ’82, who broke the record in 1979. And there was Greg Lewis, Napoleon Kaufman, Chris Polk and Bishop Sankey.

Gaskin made a name for himself by relying on speed, vision, power and ability to move quickly.

“The biggest thing Myles does is turn 3-yard runs into 7-yard runs,” quarterback Jake Browning says. “That doesn’t sound like a big deal but second down-and-7 is a lot different from a play-calling standpoint (than second-and-3). He definitely has the home run capability.”

Gaskin ran for over 1,000 yards in each of his four seasons. He’s the first Pac-12 player to ever do it, and only nine others have accomplished the feat in NCAA Division I history.

Gaskin also has the humility gene. Asked about his memories of the season-opening UW-Auburn game when he broke the UW’s all-time rushing record, Gaskin mostly talked about his teammates.

“It did feel good, I’m not going to lie about it, but I think it’s just one of those things where I’ll look back on it after the season or maybe way down the line,” he says. “I’m focused on the season and the next game.”

Says his father Scott: “One thing I will say about Myles is his character does not care about the press, the ink.” Adds big brother Ivan: “If you just met Myles, you would have no idea he was the best running back in the country. It wouldn’t come up in conversation. You never hear him talk about his stats. He really just cares about the work. And his humility, too.” 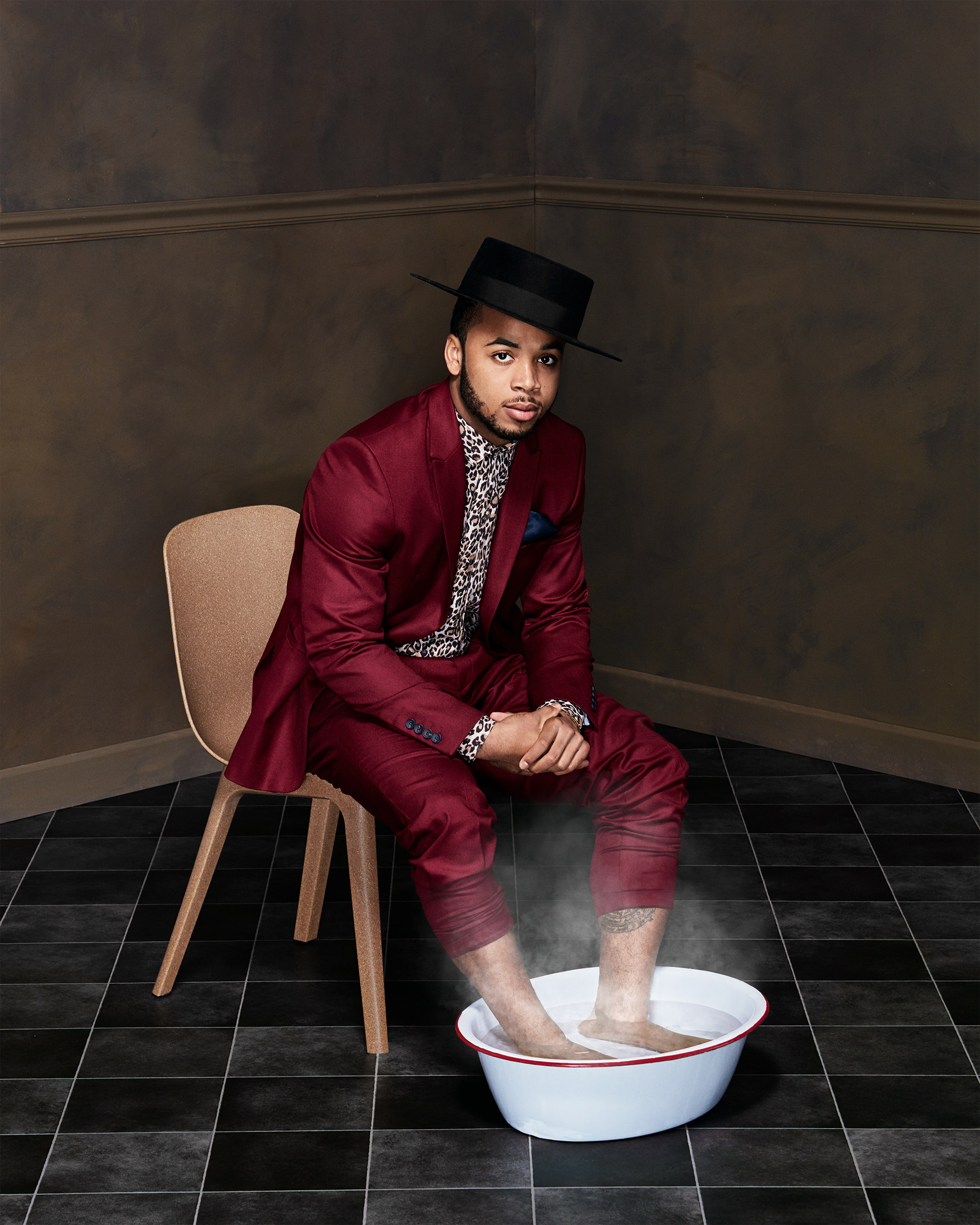 As a kid, Gaskin was more into basketball and track than football. But in high school, he posted a list of goals on his bedroom wall that included rushing for 2,000 yards in high school and playing for a Division I college. He accomplished both.

UW running backs coach Keith Bhonapha says that Gaskin is known as a very hard worker. “He’s a guy that is extremely, extremely humble when it comes to all the stuff he’s done,” Bhonapha says. “He does not rest on his laurels. He always wants to continue to get better. He wants to practice. The other thing I would say is you hear all these stories about competitor—the Tom Bradys of the world, the Kobe Bryants. Myles has that competitive fire and that chip on his shoulder. You’re not going to beat him. He’s going to outwork you.”

Gaskin lives near Green Lake with several teammates, including sophomore running back Salvon Ahmed, who has gained 630 yards in his two seasons with the Huskies.

“Myles has helped me tremendously,” Ahmed says. “He’s like a big brother to me. I take everything that he says and look at it like he’s a coach. And he’s the leading rusher for the UW so you want to take in whatever advice he’s given us.” 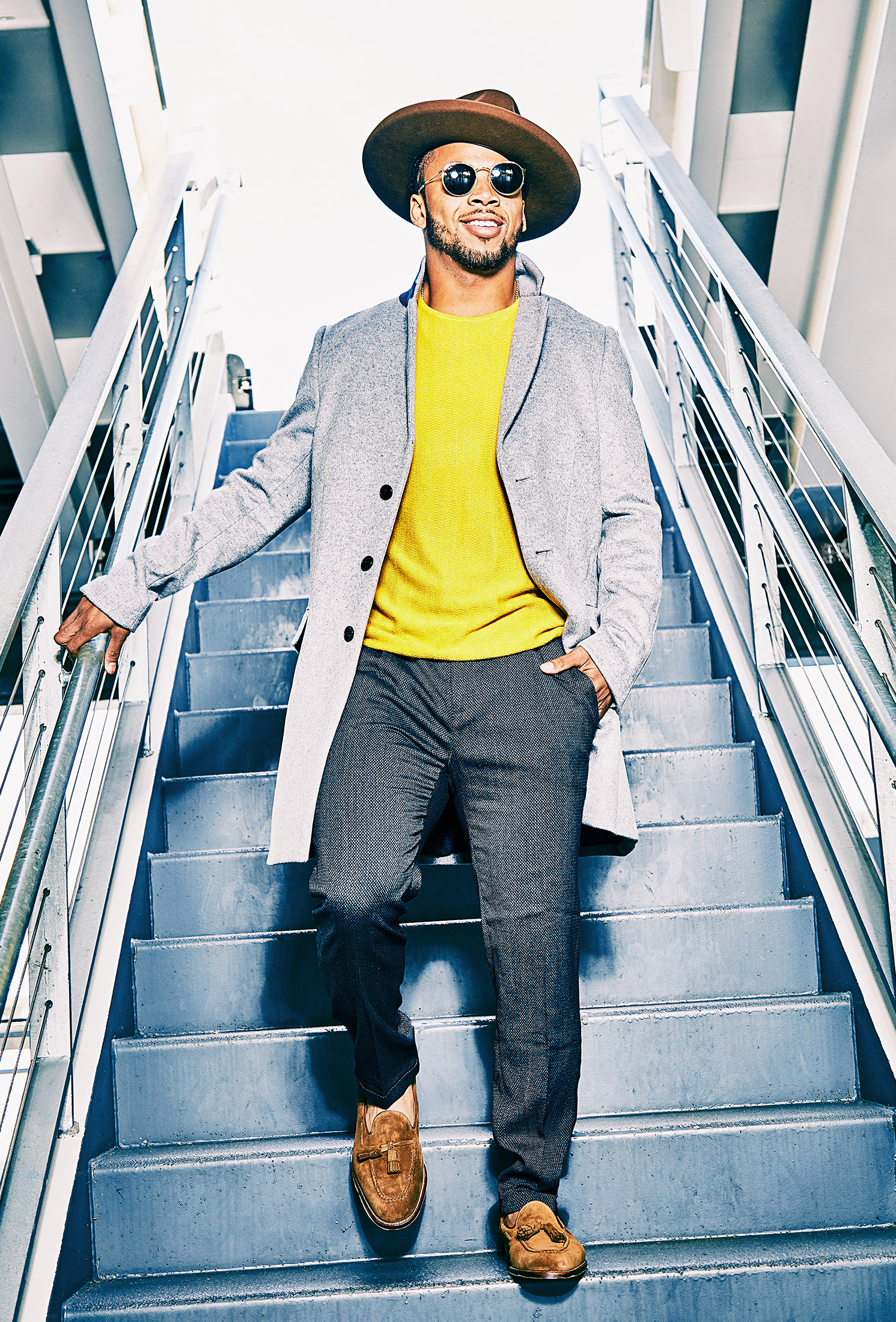 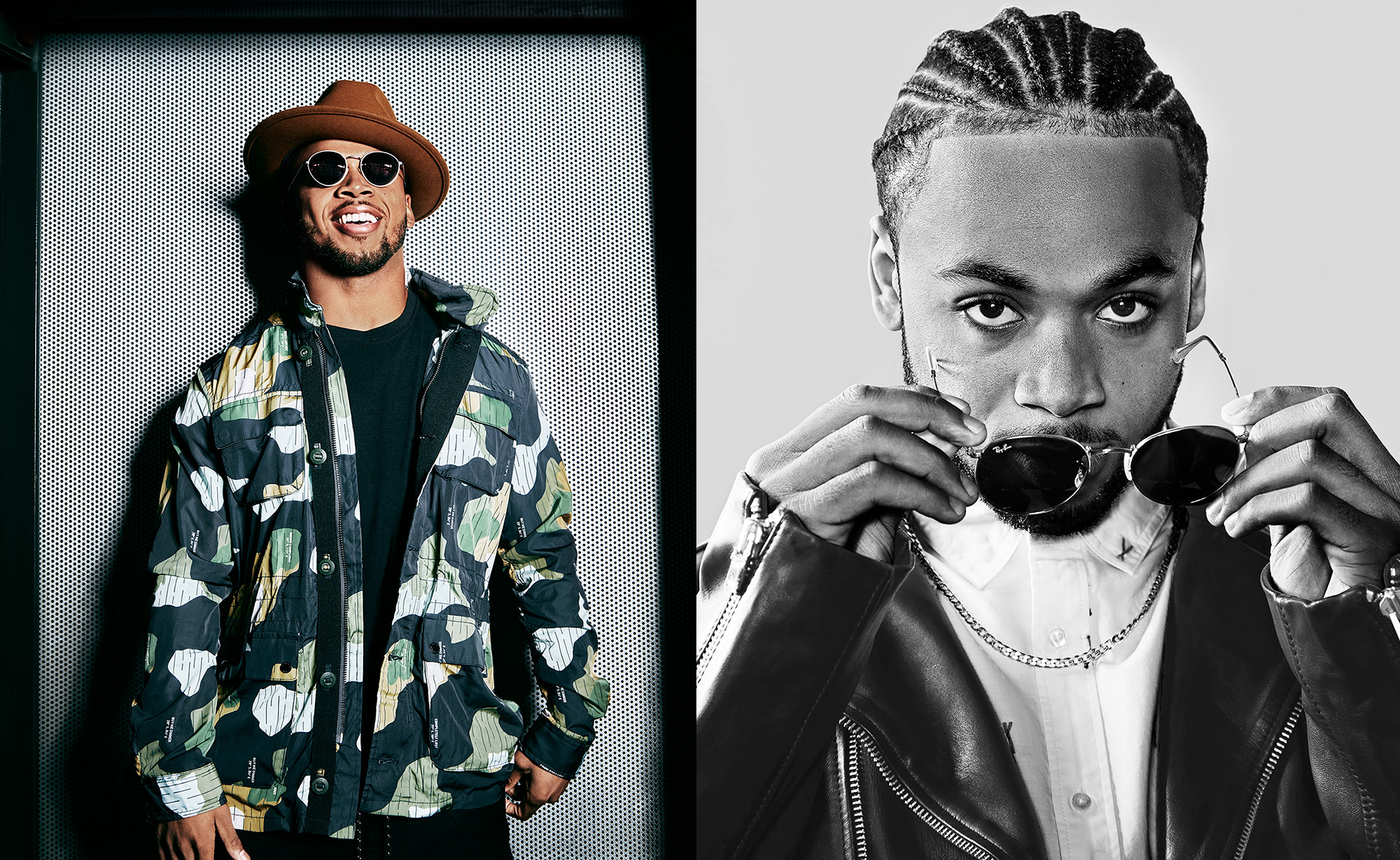 Heading into the Pac-12 Championship, the Huskies are 8-2 with Gaskin on the field. He missed two games late in the season with a shoulder injury. In the first match, a victory against Colorado, Ahmed led the other backs with 73 yards and a touchdown. In the next game, at California, UW struggled to move the ball on the ground. Running back Kamari Pleasant logged 63 yards but never found the end zone, and the Huskies dropped in an ugly 12-10 loss.

Rejoining the team in week 10, Gaskin ran 148 yards on Stanford and 135 more on Oregon State. But the sweetest victory came in week 12, at the annual Apple Cup, when the Huskies went to Pullman to take on the red-hot Washington State Cougars, who were potentially playoff-bound.

Gaskin stole the show as snow began to cover to the field. He was untouchable, finding the end zone three times and officially breaking the four-year Pac-12 rushing record. The Cougs looked like they never saw it coming. But how could they not?

The Apple Cup king rushed for three touchdowns and 170 yards against No. 8 Washington State, including an 80-yard run through a snowstorm to ice the victory. 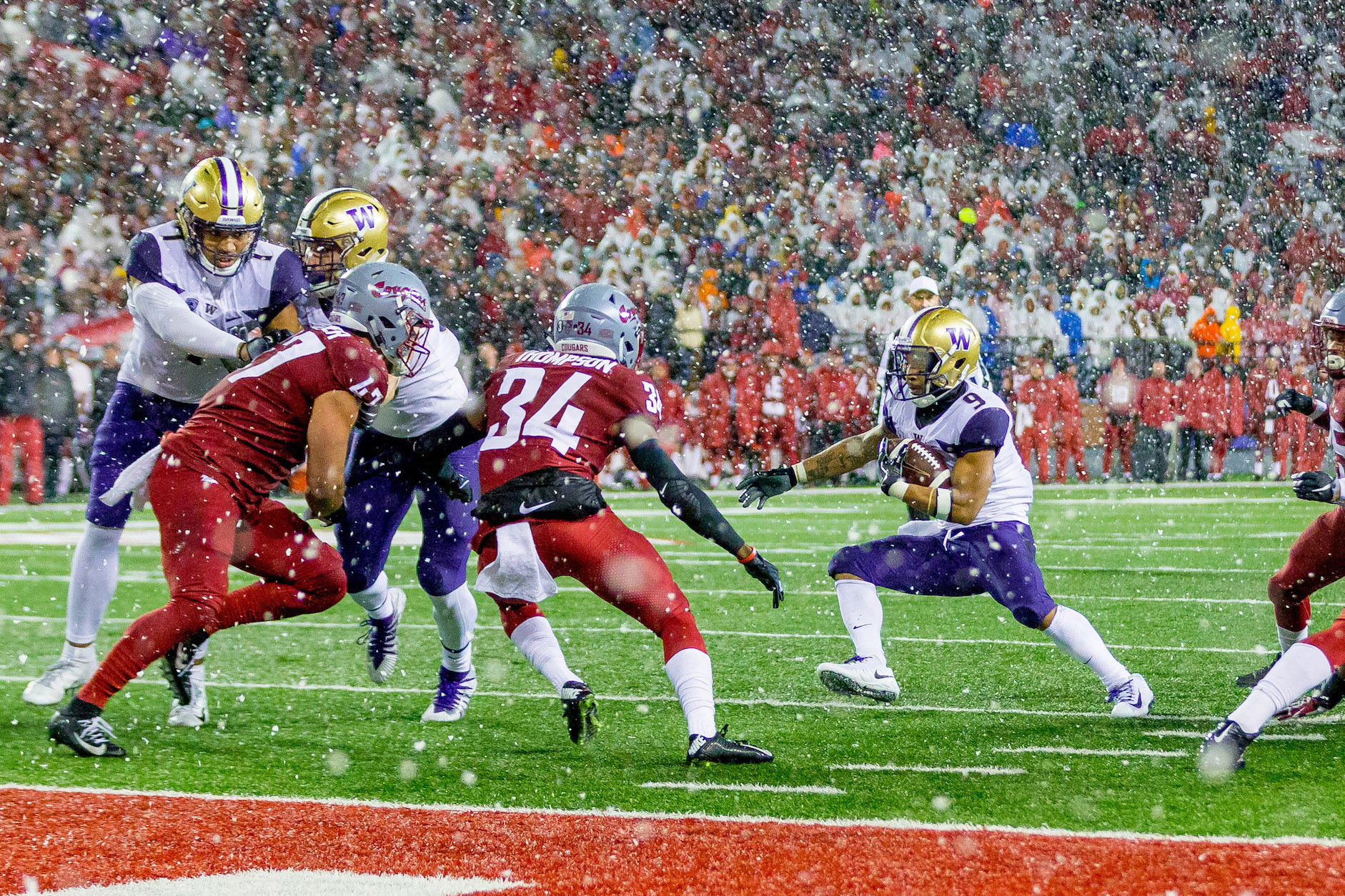 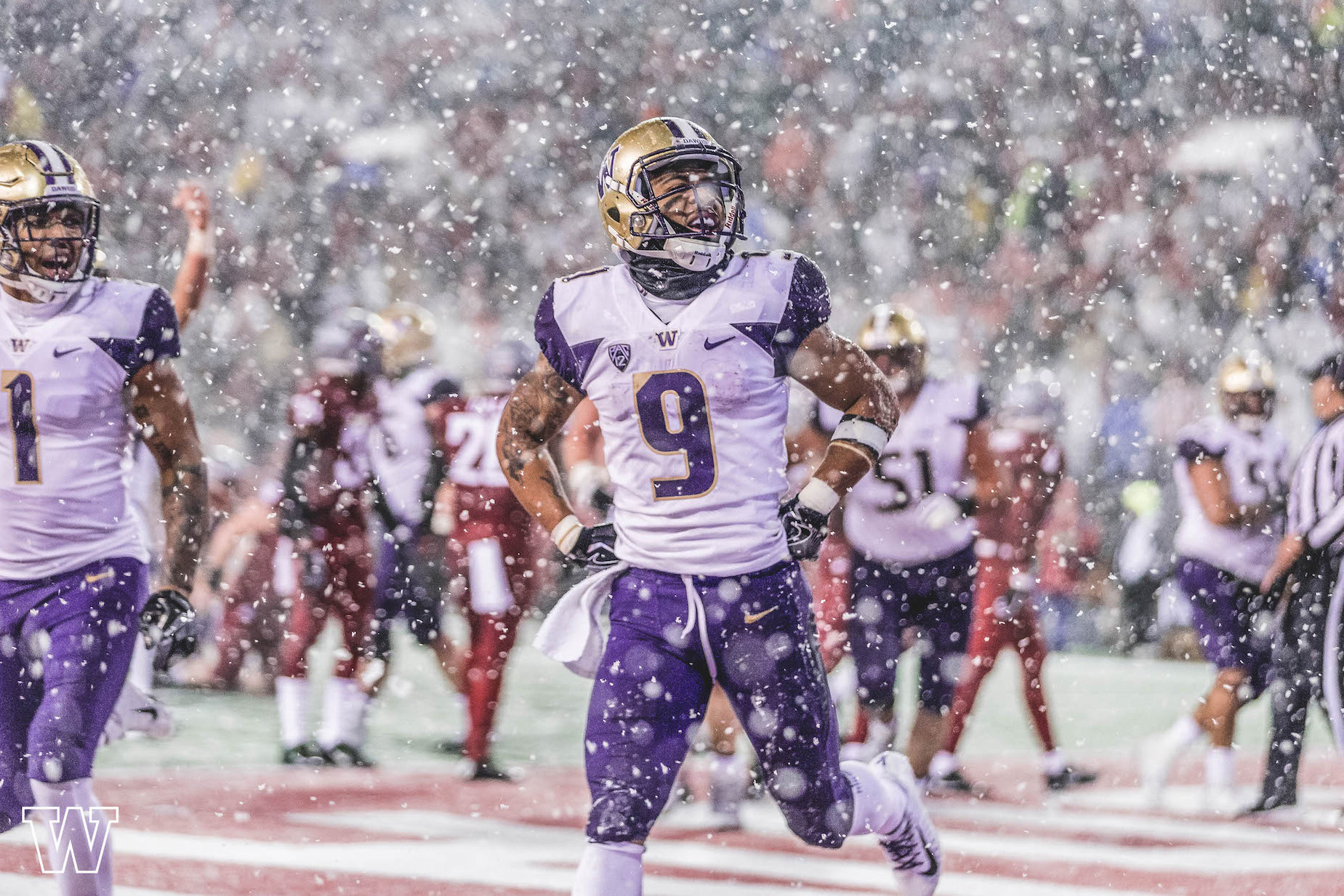 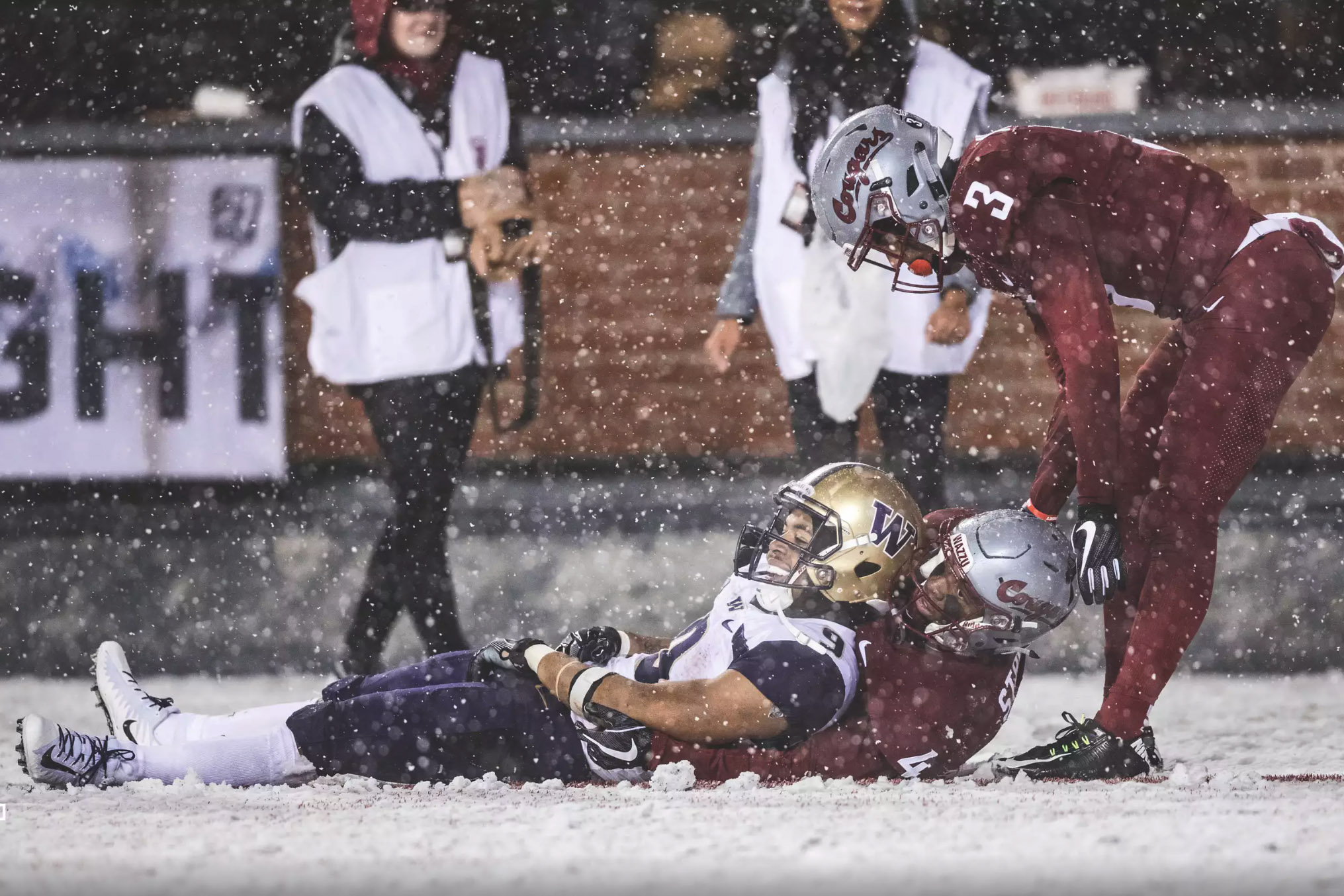 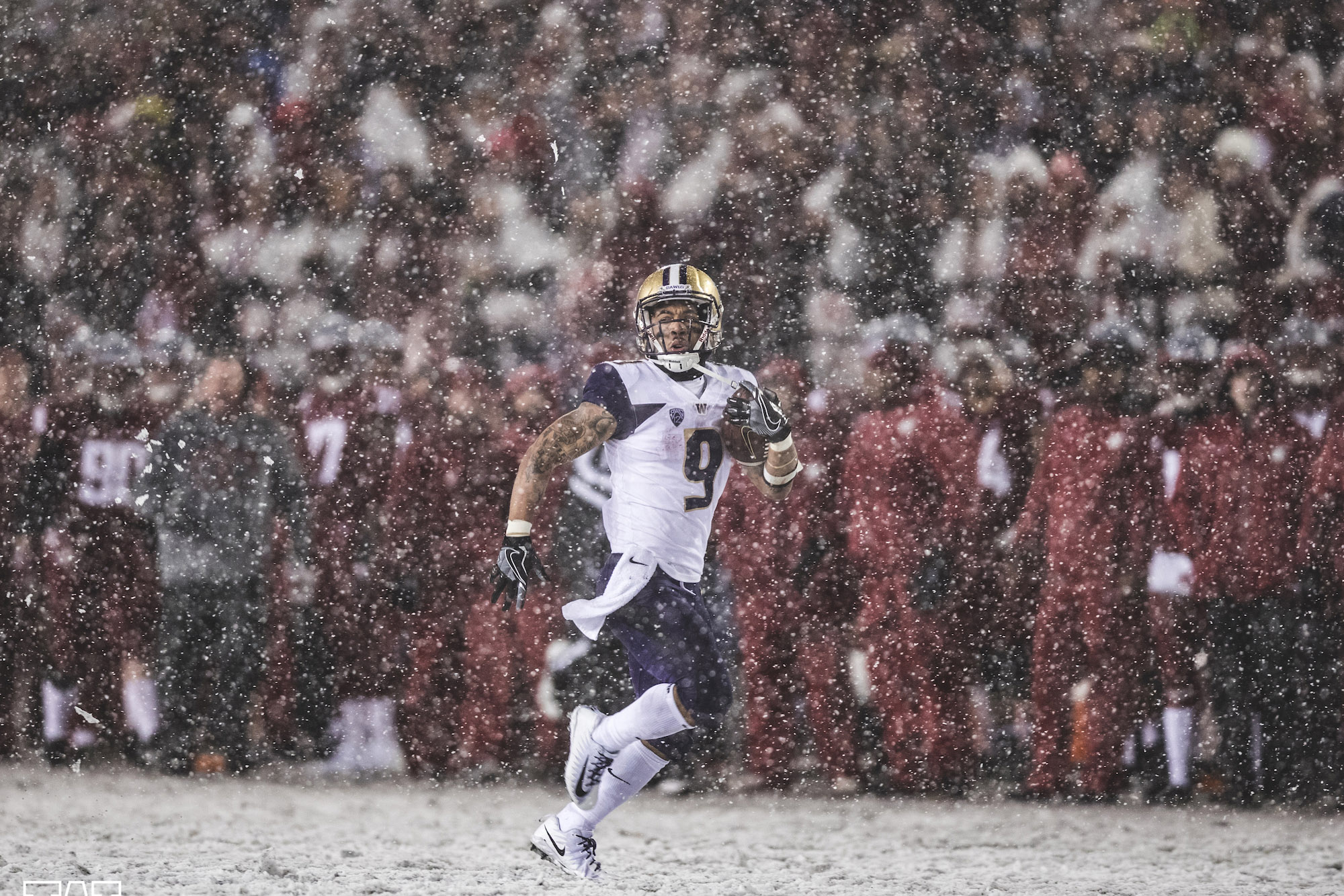 Gaskin, after setting the yardage record 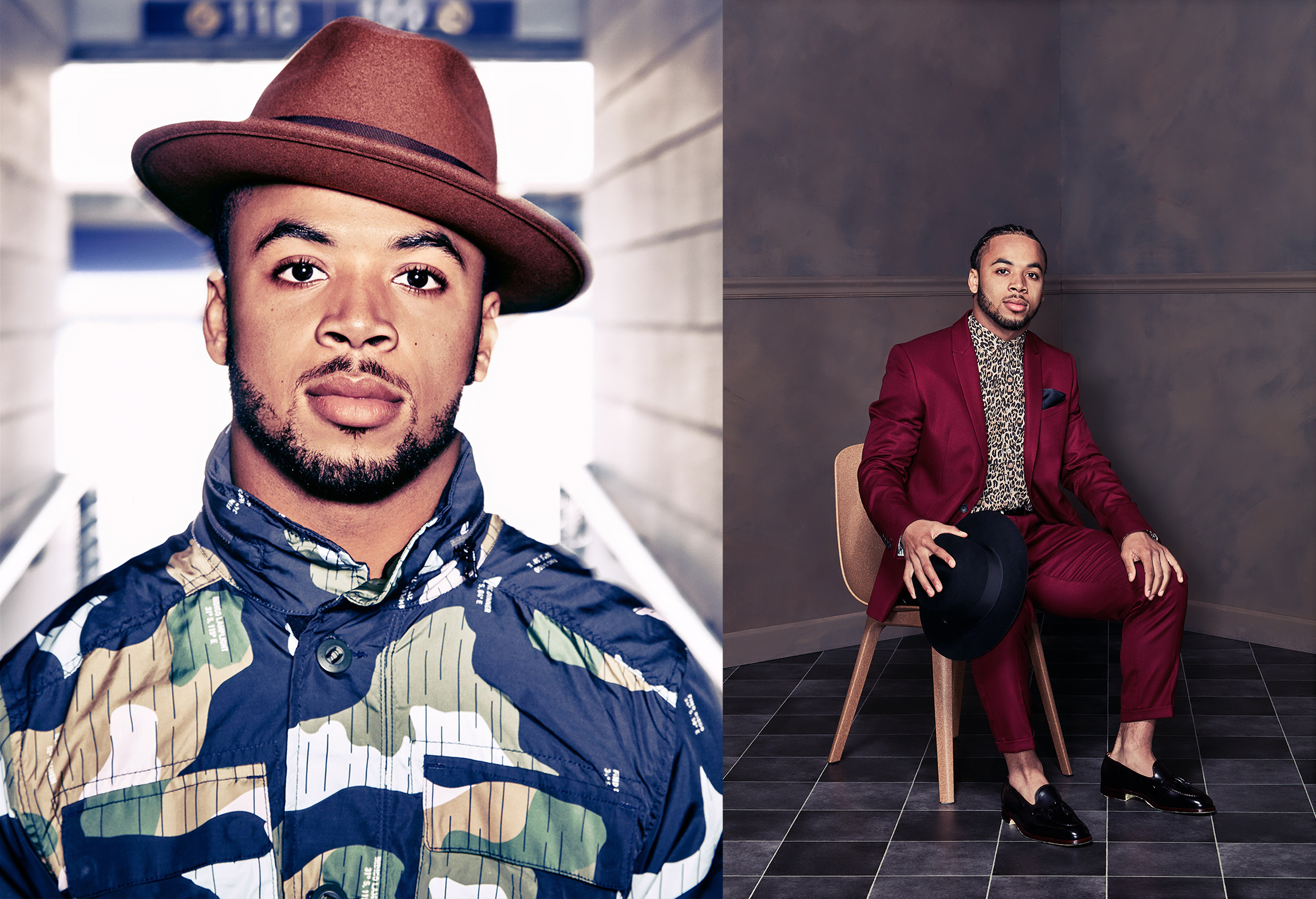 Gaskin’s heroics at the Apple Cup sent the Huskies to the Pac-12 championship, where they locked horns with Utah in a hard-hitting defensive duel. Gaskin ran for 71 yards on 23 carries, pushing the ball ahead one brutal yard at a time. The low-scoring game was decided by a UW interception and touchdown by cornerback Byron Murphy in the third quarter.

Gaskin plans to graduate this coming winter quarter—he is majoring in ethnic studies—and will also be eligible for April’s NFL draft. After football, he has his sights set on helping people.

“I want to become a firefighter,” he says. “I’ve always wanted to own a restaurant. Something that puts people into a good mood. Good food has always been that for me.”

As for the UW, Gaskin is pleased how things have turned out.

“Nothing but great things have happened for me here,” he says. “I think I’ve grown up as a man. I’ve made new relationships, met a whole bunch of new people who will probably go with me to the next stage of my life. A good amount of teachers who have opened my eyes to different ways of thinking. I’m happy.” 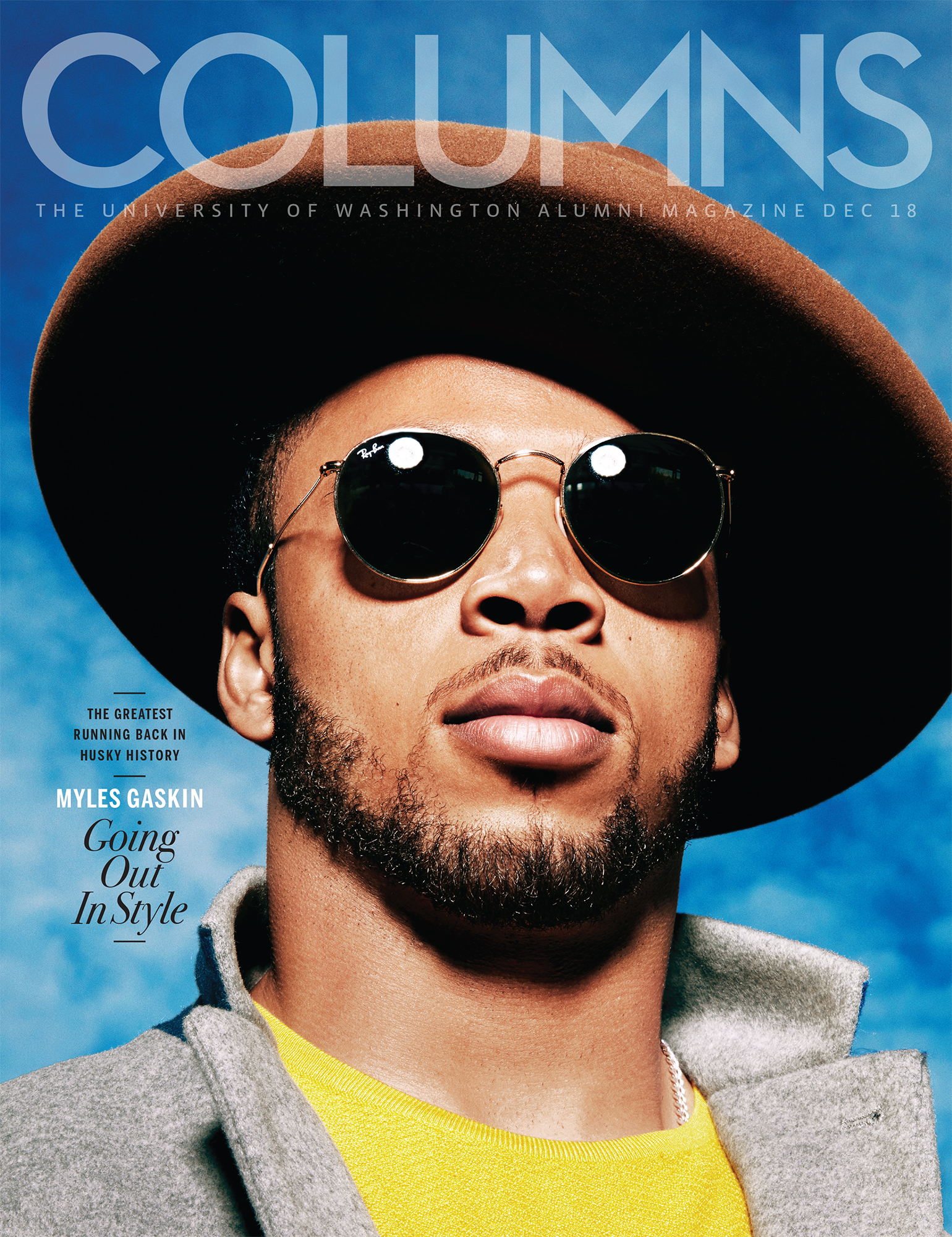