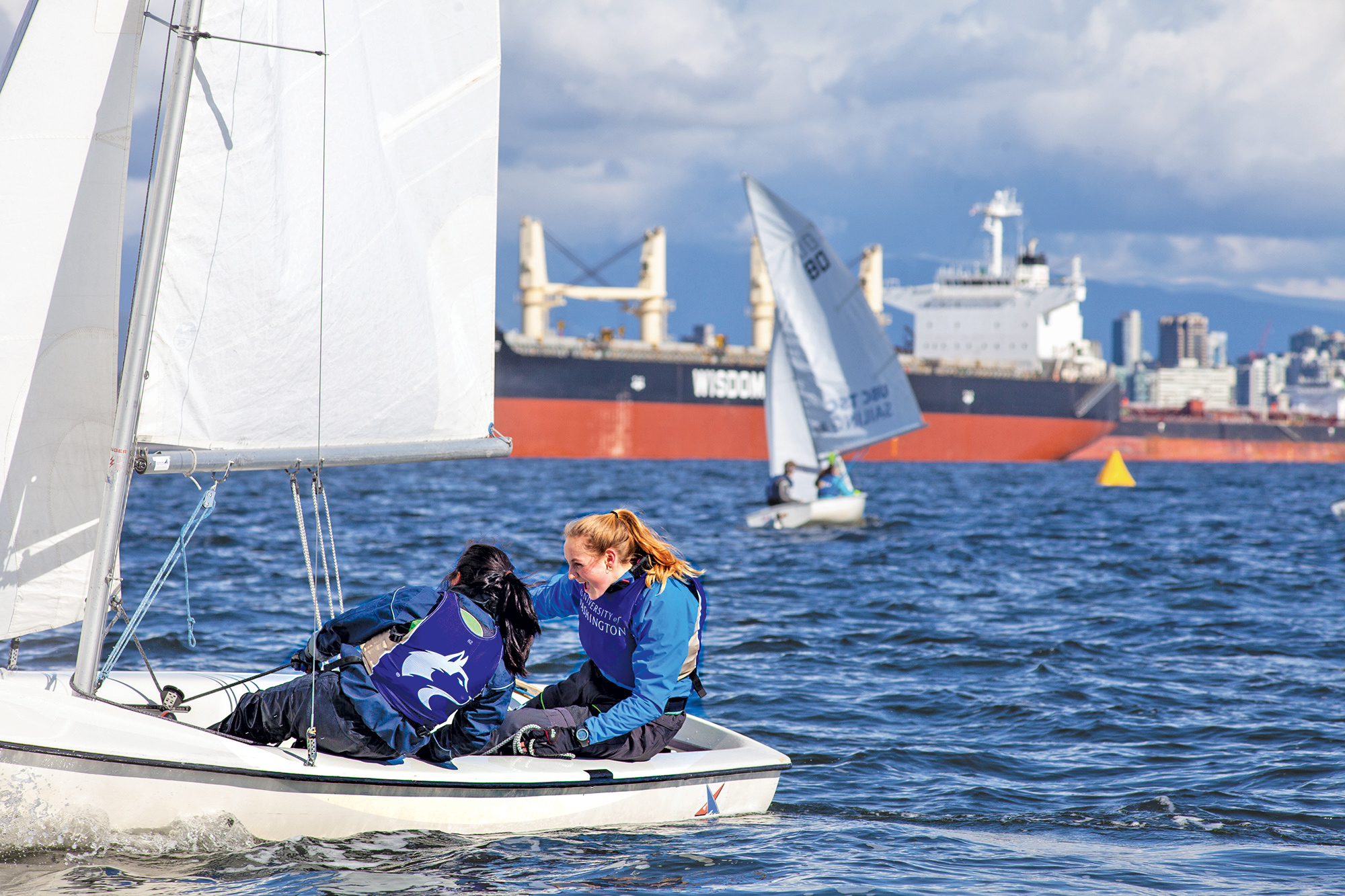 On a windy day at Magnuson Park, you might see dogs romping through the off-leash area, kites soaring over the sports fields, or—if the water’s right—a pack of Huskies sailing around Lake Washington in 12 new dinghies.

The Husky Sailing Team is a UW sports club with a history of producing Olympian athletes and racing against tough East Coast competition. But it’s also a tightknit community of students who strive to create a welcoming environment for anyone who wants to sail.

Started in 1948 as the Husky Sailing Club, the team practiced on Union Bay until moving to Sail Sand Point about a decade ago. It’s known as one of the first and only all-gender sports in college competition; the UW offers a women’s team and a coed team. Across the country, 36 schools compete in fully funded varsity sailing, while roughly 200 (including the Huskies) are club teams.

Without varsity funding, responsibility has largely been up to student sailors. “It’s on the captains to do a lot,” says former captain Sarah Kahle, ’23. “It’s seriously like a full-time job.” But thanks to dedicated alumni like Carol Buchan, ’78, a new nonprofit called the Husky Sailing Foundation aims to create a more stable future. It has already provided funding for coaches, not to mention helping secure those shiny new boats.

“The Husky Sailing Foundation’s mission is to provide support to enable [Husky Sailing] to consistently field an inclusive and competitive team,” says Buchan, vice president of the foundation. “I am personally committed to our mission’s success so future Husky sailors can enjoy the experience and rewards of collegiate sailing that I enjoyed.”

“Though we’re sailing our best and competing to win … the team values perseverance over raw talent.”

While East Coast schools boast cutthroat recruitment processes, the Husky Sailing Team welcomes all students with commitment—tryouts are not necessary. Although 86% of all intercollegiate sailors (and 96% of U.S. sailing coaches) are white, the team will work with the Samuel E. Kelly Ethnic Cultural Center to recruit more diverse athletes.

“Sailing is a sport that requires vast amounts of privilege to even get into because of how specialized and inaccessible it can be,” says Kahle. “Though we’re sailing our best and competing to win … the team values perseverance over raw talent.”

Despite undeniable team cohesion and strong support from the foundation, the Husky sailors have encountered rough waters. Kahle recalls preparing for a spring break road trip with the team in 2020, just before COVID-19. “I remember saying to my co-captain, ‘I’ll see you next week!’ And then I didn’t see her for seven months.”

Two years later, only five veteran sailors remain alongside about two dozen post-COVID-era recruits. The culture of a team that once felt like family is now in limbo. “We’ve had a difficult time bonding through virtual events, especially without a spring season in two years,” Kahle says.

But nothing can keep these Huskies down in the doldrums. Kahle and her teammates hope to pass on sailing team traditions—like the “freshman clown car.” When she was a first-year, Kahle recalls not having a car to get to off-campus practices at Sail Sand Point; she was crammed into an upperclassman’s back seat alongside fellow carless first-years. As a senior with a car of her own, she carries on the tradition by offering rides to as many first-years as she can fit.

And those 12 new boats? They’ll all need names. Kahle says, if given the chance, she’d choose something “probably really nerdy. Like Millennium Falcon or Enterprise.”