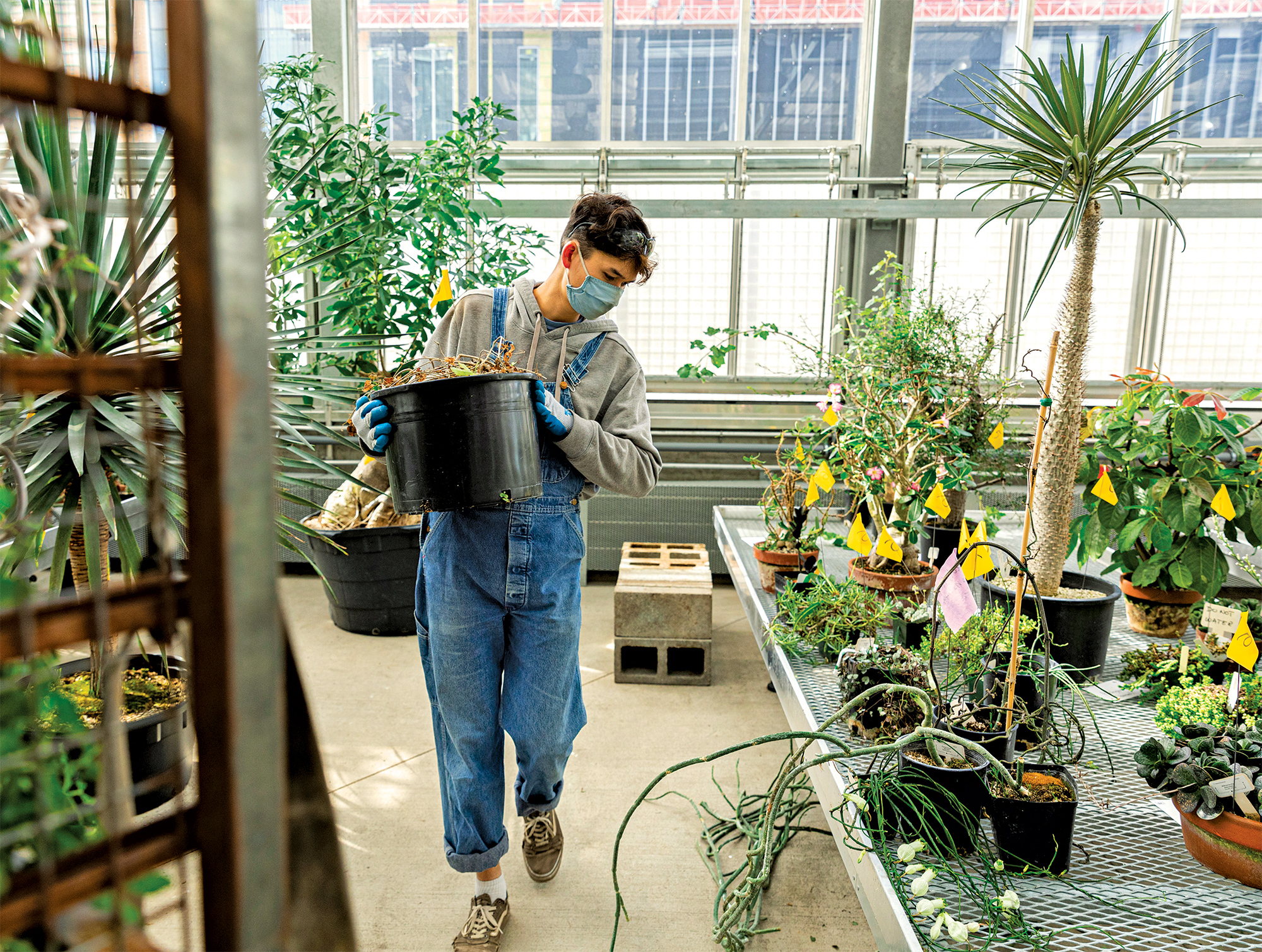 The Biology plant collection settles into its new home, a state-of-the-art greenhouse.

Five days, 19 moving trucks, 28 volunteers, nine staff and as many as 3,500 unique species. And now, after five years away, the UW’s world-class plant collection is back on campus. It has a new home in a 20,000-square-foot greenhouse attached to the new Life Sciences Building.

In October, the biology department moved its prized plant collection from temporary digs in Redmond. The relocation posed a few challenges—25% of the collection is hanging plants, and the greenhouse team is still working on placing them all, says Katie Sadler, the greenhouse manager. Also, cacti can be tricky to transport.

“Overall, I’d say the move went beautifully,” says Sadler, crediting her team of nine—regular, temporary and undergraduate workers. It wasn’t simple, though. Before the trucks arrived, the group spent days marking each plant for the move, deciding in which greenhouse room it belonged. Now the group needs more time to ensure each plant is optimally placed. Some have even left the greenhouse facility. The coffee plants, for example, are now in the main building next to the coffee shop. And some prehistoric plants found their home on the paleobotany floor.

The new facility replaces the old botany greenhouse, which was built in 1949 to support genetics research. In the 1980s, the botany department stepped in and started filling the rooms with specimens from around the world. Beyond its use for teaching and research, it was a beloved spot for faculty and students just wandering through “for their sanity’s sake,” says David Perkel, chair of the biology department.

The facility will support more than 5,000 students in classes including landscape architecture, ecology and anthropology.

Having the collection so far away has been a challenge to faculty like Adam Steinbrenner, an assistant professor who studies how plants protect themselves against insects. Last year, he published a paper on how plants like the cowpea detect that they’re being eaten by caterpillars and trigger a defense. He and a number of researchers really missed the easy access of the facility. “We are a fully integrated biology department, from molecules to ecosystems,” says Perkel. “Having a greenhouse is absolutely critical to that.”

For the last four decades, the UW greenhouses have been a home for research and teaching as well as a living museum where visitors can see plants like the exotic welwitschia, a two-leafed plant that grows in the Namib desert and can live up to 1,000 years, and the crowd-drawing corpse flower (Amorphophallus titanum), which blooms every seven to nine years. It is also a space to grow more pedestrian plants like petunias and geraniums for use in undergraduate classes.

The new ADA-accessible facility has state-of-the-art climate controls and secure spaces for research projects. It will also support more than 5,000 students in classes including landscape architecture, ecology and anthropology.

The collection and the greenhouse team now need a few months to settle into their new space, but hopefully the doors can open to the public next year, says Perkel.

“People have asked what our ambition is with this new facility,” he says. “My own goal is to have it be even more of a destination for scholars as well as plant lovers who want to see plants they’ve never seen before.” Perkel envisions welcoming those who do “hard-core scholarly work” as well as garden clubs and schoolchildren. “The goal is to put our outstanding collection on the nationwide map. Now that we are in our new home, we can do a better job of making this a destination.”