With an adventurer’s spirit, Michael Young plans to make the UW a leader in solving the public higher education funding model.

When Michael K. Young was introduced as the University of Washington’s new president at an April press conference on the UW campus, the very first thing he did was tell a joke. A newspaper profile that appeared a few days earlier informed readers that he preferred the Rolling Stones to the Beatles. So when Young stepped to the lectern before a room full of reporters and TV cameras to issue his first words in his first public Seattle appearance, he said, “I want to issue a heartfelt apology to all Beatles fans,” drawing a big laugh from everyone inside the Gates Commons of the Paul G. Allen Center for Computer Science & Engineering.

Easygoing, self-assured, and equipped with a great sense of humor, the 61-year-old new leader of the University of Washington takes office July 1. He arrives at one of the most critical junctures in the history of the Pacific Northwest’s largest, most respected public research university.

The economic downturn, decreasing state support, rising tuition and uncertainty about the future of public higher education gave Young pause before he accepted the job as the UW’s 31st president. He was, after all, quite comfortable as president of the University of Utah, which under his watch grew in national stature, partly because it became the nation’s leader in creating spinoff companies from university research.

But taking on big challenges has been part of Young’s life for as long as he can remember. His first job after graduating from Harvard Law School? Clerking for an associate justice of the U.S. Supreme Court. First faculty job? Teaching at Columbia University Law School, from where he took a break from academia to hold several senior-level positions in George H.W. Bush’s administration. Then he was dean of George Washington University Law School before assuming his role at the University of Utah.

In other words, a sense of adventure, confidence and courage are in his DNA. Or, as Young confessed: “My son always said I am more comfortable walking on a tight rope over the Grand Canyon.”

“The University of Washington is extraordinary by any measure. I am very fortunate to be a Husky.” 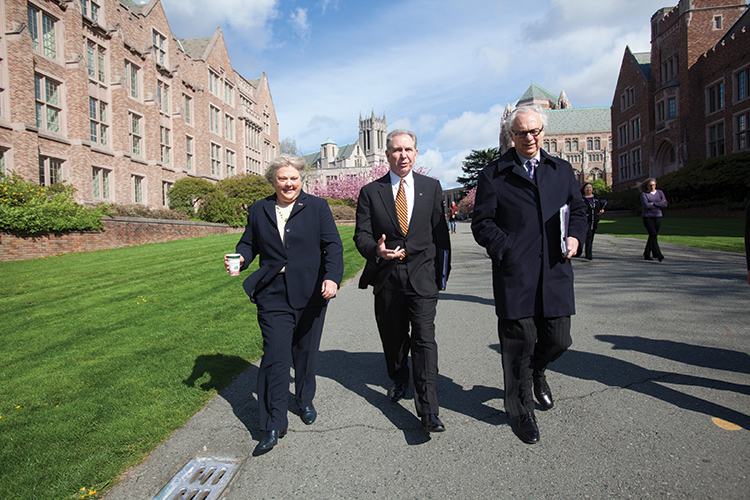 Young is accompanied by Kellye Testy (left), dean of the UW School of Law and chair of the presidential search committee, and Herb Simon, ’65, chair of the Board of Regents, to the press conference. Photo by Ron Wurzer.

So here he is in Seattle, about to guide the UW through its biggest challenge in recent memory. And he couldn’t be more excited.

“Whatever nervousness I might have is outweighed by a tremendous sense of excitement,” he said during an exclusive interview with Columns. “The University of Washington is extraordinary by any measure. I am very fortunate to be a Husky.”

While his name may be new to some in the UW alumni family, Young—an indirect descendant of Brigham Young—is no stranger to the Pacific Northwest. A native of Northern California, he attended the 1962 Seattle World’s Fair as a youngster. His uncle also took him to explore the Olympic National Forest, where he experienced the wonder of the rain forest. “Absolutely amazing,” he recalled.

That sense of adventure will serve him well in Gerberding Hall. He has not yet set up shop on campus and already he has zeroed in on the challenge of finding a new way to fund a public flagship university in a wrenching economic environment where state support continues to dwindle and people don’t want to pay higher taxes.

Right away, he goes into his educator’s mode: “The role of the public university has been absolutely essential for 200 years,” he said. “Public universities are the epicenter for training students and economic development. They are the institutions that educate America, that produce the technology and innovations that have made America the world’s economic and political leader for more than a century.

“I understand the acute pressure on legislatures, but we have to look at our model of funding. I hope to develop a genuine partnership with the Legislature, to help everyone understand that we are not an expense line in the state budget; we are an investment line. We are not a problem for the state to solve or address, but rather we are a major part of the solution.

“We have the capacity to think through these challenges and devise creative, effective solutions. No one is better positioned than the UW. It is going to be very exciting.” 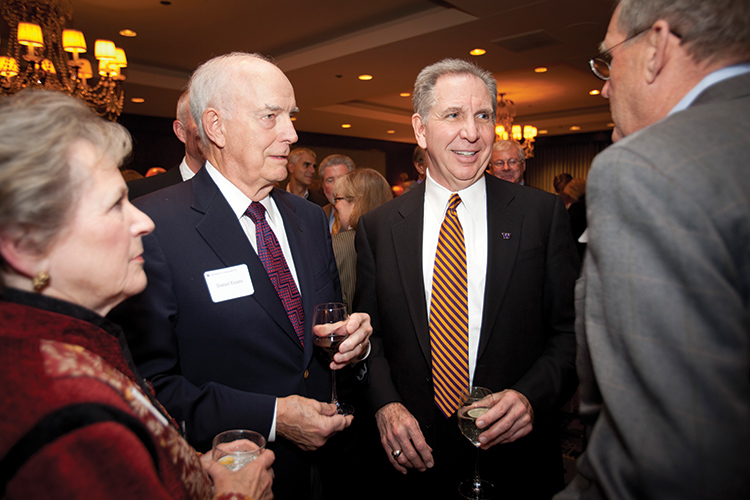 “The University of Washington can be a national and global leader in figuring out how we can tackle this challenge. We have superb faculty, remarkable students and the most entrepreneurial community I have ever seen. We have the capacity to think through these challenges and devise creative, effective solutions. No one is better positioned than the UW. It is going to be very exciting.”

The excitement of that challenge ultimately enticed Young to leave the University of Utah after seven years packed with eye-popping success on many fronts, from athletics (where the Utes football team went undefeated twice in seven seasons) to overtaking MIT as the nation’s leader in turning university research into spinoff companies, from building more than 2 million square feet of new research and teaching facilities to doubling research funding.

He was also enticed by the opportunity to run an academic enterprise that he says is unparalleled in excellence, collaboration and breadth. “There are many universities that are great in one area or another,” he said. “But here, the health sciences is only second to Johns Hopkins in federal research funding. The School of Social Work leads the nation in federal grants. The arts and sciences are unparalleled. It’s unique to have a university with that kind of breadth and depth of excellence.

“I loved my time at Utah, it was a real love affair,” Young added. “Personally, the opportunity for a new challenge was something I could not pass up. I think this is the most exciting challenge in higher education in the country.”

And despite the problems and challenges awaiting him here, he is quick to add: “This university is not in need of a makeover. It is extraordinary in every respect and we will just work together to make it even greater.”

Young says he plans to spend the next several months listening so he can learn the lay of the land. That will include visiting faculty in their classrooms and labs several hours every week. “The faculty is the heart and soul of a great university,” Young explained. “And I love being part of the faculty. After all, I’m just a country lawyer. There are lots of brilliant people here from whom I need to learn.”

Teaching and learning have inspired Young ever since he was a child, when he caught the bug to go into law. “I cannot recall a time when I didn’t want to be a lawyer,” he said. “My mother must have whispered that to me when I was in my crib. I just love being around and involved in issues, the solutions to which might make people’s lives better.”

Young is thrilled with one new solution that will kick in next fall—the new TV deal that the Pac-12 has entered into with Fox and ESPN. It is the largest TV contract of any college league, worth approximately $3 billion over 12 years. But more than the financial windfall (approximately $21 million to each school every year), the deal will bring something Young says is vital: national exposure. “The Pac-12 has some of the best academic institutions in the world,” Young said. “This TV contract is one way we can get national exposure.”

In addition to presiding over the most important economic engine in the Pacific Northwest, Young will hold a faculty appointment in the UW School of Law. In the near future, the second editions of two books, one he wrote on international trade law and another he co-authored on international environmental law, will come out, and Young—an expert on Asian law who spent his Mormon mission in Japan—has a large-scale research project in Japan in the works. “I want to keep my hand in it,” he said. “I love being a professor.”

Along with joining a faculty that ranks among the best in the world, Young also loves the prospect of having the support of an engaged alumni community.

“The faculty is the heart and soul of a university,” he said, “but what makes a University truly great is its partnership with alumni. Alumni are the absolute lifeblood of a university. Alumni support their university, not only financially, but also by helping people understand what a university can do and then helping the University do it.” 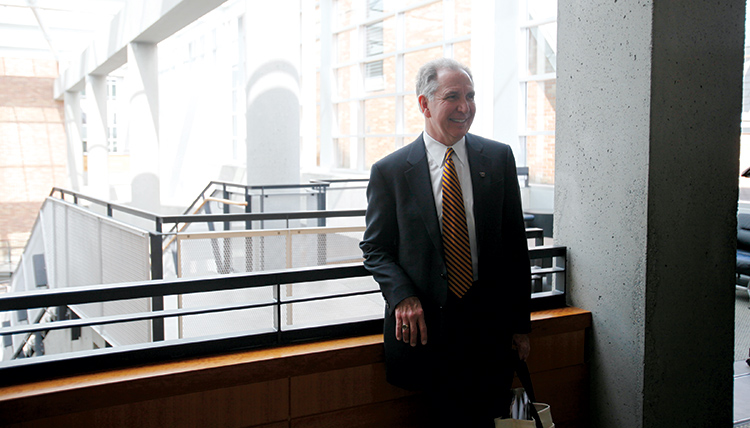 BOOKS PUBLISHED
The Fundamentals of U.S. Trade Law and Japanese Law in Context, and Readings in Society, The Economy, and Politics, both published in 2001.

ALSO
Served two terms as Chair of the U.S. Commission on International Religious Freedom, a major federal advisory commission created by Congress in 1998 to advise the President, the Secretary of State, the National Security Advisor and the Congress on U.S. foreign policy.