With compassion, innovation and empathy, public health leader Patty Hayes strives to make life better for all of us. 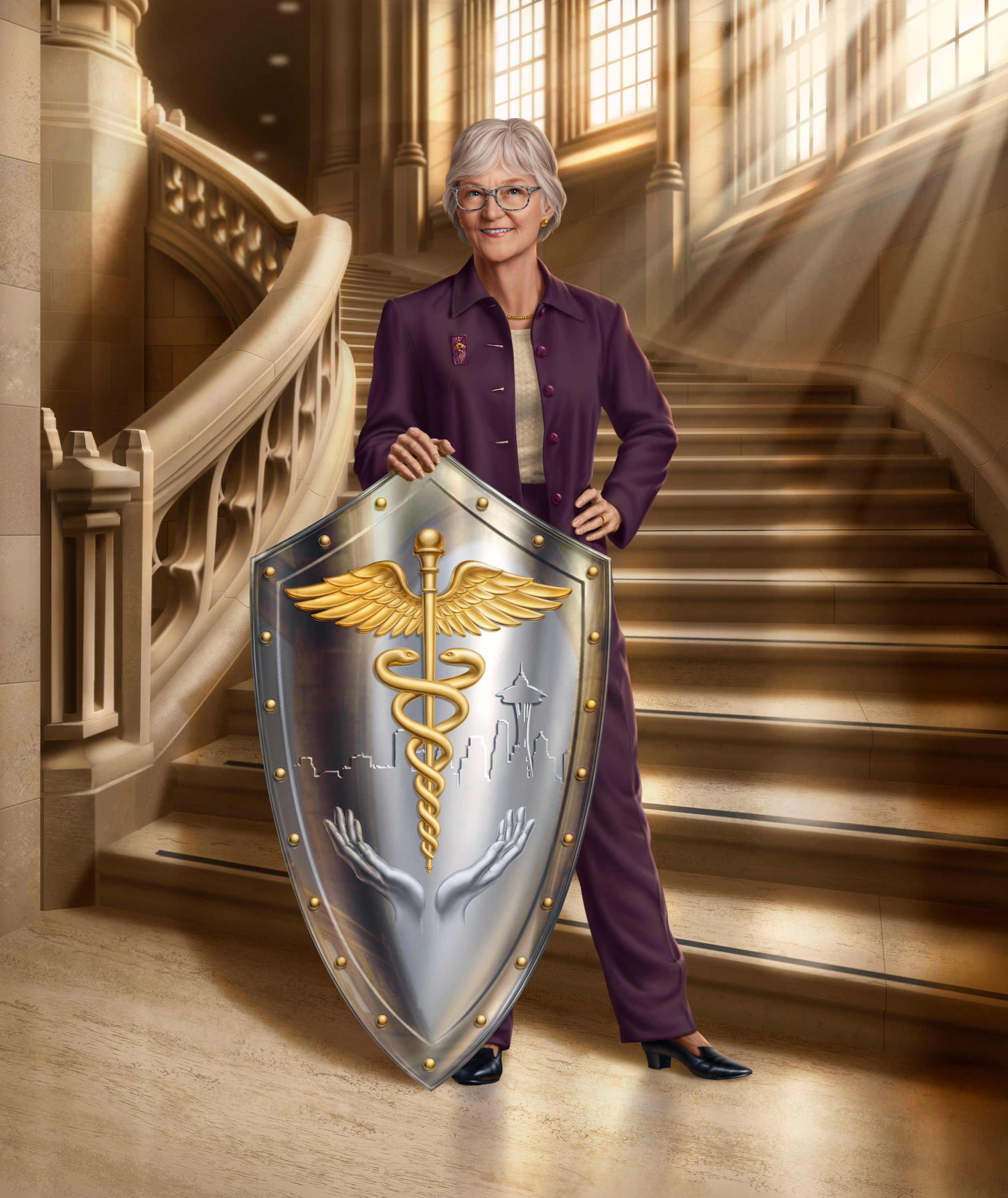 Patty Hayes became a household name for her role in Western Washington’s response to the novel coronavirus, but until then she did her work as director of Public Health—Seattle & King County (an organization most people refer to as the Health Department) mostly under the radar. That meant the incredible impact she made during her career was not widely recognized.

Then came the new year. As state and regional governments raced to respond to the first reported case of COVID-19 in Washington on Jan. 21 and the first reported U.S. death in Kirkland on Feb. 24, the 2020 recipient of the UW’s Alumna Summa Laude Dignata award—the highest honor presented to an alum—became one of the main people at the podium in a long stream of news briefings about this devastating new virus. It probably was one of the last things Hayes imagined when she was a UW nursing student in the 1970s. But everything in her career prepared her for this moment.

As Hayes, ’76, ’80, puts it, “I step into some really hard places.” And running a metropolitan health department in the middle of a pandemic could be one of the hardest. Fortunately, Hayes says she’s been able to rely on some key skills developed along the way. Her experience running a professional organization in a time of crisis gave her the administrative acumen needed to oversee all of the pieces that have to come together to deal with the pandemic. Her experience lobbying taught her the importance of building the relationships she’s now relying on to persuade politicians to make difficult, potentially unpopular decisions to protect the public. At the same time, her experience as a nurse has made her adept at explaining unpleasant realities while keeping people calm.

“I go in front of the camera to talk about the implications of the pandemic, what we need to do to support each other and where we’re at in the nation,” she explains.

“It’s really important to have somebody at the podium that not only says the truth but also acknowledges the difficulty and is compassionate.”

She has gotten so good at breaking potentially bad news that Seattle Met magazine praised her in an article called “A Guide to Recognizing Your Coronavirus Briefing Saints: Who are all those people on the podium.” Writer James Gardner said Hayes is “often the coolest customer at the podium.” Although she hadn’t heard the praise until it was read to her, she was quick to acknowledge its significance.

“It’s really important to have somebody at the podium that not only says the truth but also acknowledges the difficulty and is compassionate,” she says. “I believe people need that. They need somebody they can trust. They need somebody who will spark confidence and also touch the heart. That’s just so important in times like this.”

Hayes’ leadership undoubtedly had a major impact on Western Washington’s effort to flatten the pandemic’s curve of contagion. It might not have been a coincidence that the UW honored her during the World Health Organization’s “Year of the Nurse and Midwife” in honor of Florence Nightingale’s 200th birthday.

Of Hayes’ long record of impact, Azita Emami, executive dean of the UW School of Nursing, says: “For decades, Seattle has been known nationally and internationally as one of the healthiest and most health-centric cities in the U.S. Patty Hayes has played a leading role in creating that highly visible and extremely successful culture of health.

“She’s the kind of unsung leader that does her job in a fabulous way and she serves a very large amount of people. She leads all these unique projects. She deserves more recognition for her visionary approach to public health.”

Hayes brought a new focus on the impact that trauma has on treatment outcomes, which has prompted the Health Department to be sensitive to the issue as a possible determining factor in an individual’s health. She also played a big role in Best Starts for Kids, a program designed to make people healthier by “fostering a culture of health starting at birth and into adulthood.”

The funny thing is, Hayes never planned to spend her career focusing on innovative health-care initiatives. Instead, she got her start as a candy striper in the 1960s after she watched a sitcom called “The Patty Duke Show” at 14 and saw one of the main characters performing volunteer nursing. She attributed part of her interest in caretaking to her experience helping her mother, who had been severely injured in an automobile accident. The other part was her interest in science.

“It was an age when a lot of women didn’t always have a lot of choices on what to do for careers. I was a super-achiever in school and I loved science. [Nursing] was the perfect track for me in terms of being able to be around people and help people out,” she recalls. “When I took a look back at all of the opportunities in the health field, nursing was the most interesting to me because it was working with families.”

“... I step into places that are very difficult and figure it out. I’m pretty feisty about continuing to push on something that I believe is right”

Although she started her career as a bedside nurse at West Seattle Hospital, it didn’t take her long to realize she was interested in going further. “I wasn’t satisfied with bedside nursing, which is an honorable career. It just didn’t fit my personality. I realized I was interested in the whole circumstance of my patients, what is going to make them successful when they go home.”

She found a path that fit her better after returning to the UW and earning her master’s degree in stress management and psychosocial nursing, which focuses on a more holistic approach to health care. After graduation, she became a community nurse with the Washington Department of Social and Health Services and conducted home-care visits to help families find the right long-term care placements for severely ill relatives.

Before she knew it, she was focusing on families with young men who suffered neurological damage and required long-term care because they weren’t wearing helmets when they were in motorcycle accidents. She said she helped many parents determine the best way to care for a son “whose life was decimated when that could have been prevented.”

“It was the first spark where I really saw the opportunity to do public health work in injury prevention,” she recalled. Seeing the difference the passage of a helmet law could have on the health of motorcycle riders is part of what prompted her to jump when she saw that the Washington State Nurses Association was looking for a lobbyist.

“I think the skills a nurse learns are very transferable into the policy world. Think about this. Nurses can come in and convince a patient that they need to have a nasal gastric tube or they need to have some sort of invasive procedure, and we are really good with people during those tough times. I think we’re the perfect people to translate policy into development,” she says. She even had an edge over most lobbyists because “I could talk from my heart about what we needed and why we were doing what we were doing.”

She eventually became WSNA’s executive director and led the organization through a period of upheaval when a union raided its membership, potentially undercutting the professional association’s status as a labor organization. She kept the WSNA intact, but downplays claims that she saved the group. She says it was the whole leadership team.

“Whatever the project, our students always find Hayes inspiring and visionary.”

Hilary Godwin, dean of the UW School of Public Health

“It was one of the examples where I step into places that are very difficult and figure it out. I’m pretty feisty about continuing to push on something that I believe is right,” Hayes says.

She’s been helping nonprofits, state, local and federal governments find ways to figure things out ever since. That includes serving as a government relations consultant for health care-related organizations; developing a curriculum for evening students at Saint Martin’s University interested in nursing-related master’s degrees focused on leadership and public policy; working with Congress on health-policy issues; and helping lead the rollout of the Affordable Care Act exchanges in Washington state. She also served as executive director of WithinReach, a nonprofit helping underprivileged families gain access to health care and food.

Hayes stepped into another difficult place in 2012 when she was hired as director of King County’s Community Health Services Division. It is the largest division in the King County Health Department with the maternal/parent-child health programs, medical/dental clinics, health care for homeless and school-based health centers, to name a few of the programs. In 2014, she was appointed director of the Health Department, when it was $12 million in debt. She not only helped the agency return to sound financial footing while maintaining its position as one of the country’s top health departments, she also has been leading initiatives to change the way it does business. For example, she leads an effort to reinvent maternal child health-care services. King County Executive Dow Constantine, ’85, ’88, ’92, also asked her to work on an innovative approach to eliminating youth detention. “I’m always on the edge of something new,” she says.

Emami says the UW discovered Hayes’ passion for innovation when the nursing school became interested in focusing on population health and was looking for collaborators.

“Patty Hayes was already creating cutting-edge programs, advocating for those with no other voice, rallying resources and advancing ideas that later became standard practice,” Emami says. Hilary Godwin, dean of the UW School of Public Health, praises Hayes for working with the schools of nursing and public health to set up an academic health department. “The collaboration allows our faculty and students to engage in meaningful service while being exposed to state-of-the-art public-health work, keeping our research, education and training fresh and relevant,” Godwin says.

“Whatever the project, our students always find Hayes inspiring and visionary. She keeps her agency moving forward in new ways and is hugely supportive of using the health department as a laboratory for student participation and growth.”

Despite her long list of achievements, Hayes remains humble after receiving the UW’s honor. “I think it’s just my long-standing support and tenacity for health care and public health over all these years,” Hayes says. “Getting an award of this level from your school means so much to me, especially when I look at the past recipients.” While she might question whether her contributions merit such recognition at this point in her career, she has no such qualms about the impact the UW has had on her life.

“It helped me learn to be confident and brave in trying new things although that was core to my personality. I think the school of nursing fostered that, and [I] feel so lucky to have such an amazing school to continue to be affiliated with.”

David Volk is a Seattle freelance writer and frequent contributor to University of Washington Magazine.