People person: Photographer Bob Peterson’s lens has seen it all

From John F. Kennedy to Janis Joplin, the former UW sociology major and Daily shooter has a knack for making his subjects feel at ease.

From John F. Kennedy to Janis Joplin, the riots in Newark to roiling scenes on Clint Eastwood movie sets, photographer Bob Peterson has seen it all, and recorded it all, with his trusty Nikon for LIFE magazine, Sports Illustrated, Nike and more. The former UW sociology major has a knack for making his subjects feel at ease, and his famous photos and photos of famous people confirm that in his new book of photography, “Bob Peterson.” A longtime Seattle resident, Peterson, ’78, worked for The Daily while a UW student, and has done everything, from searching for narwhals in Canada to sharing drinks with Mario Puzo in the Flamingo Hotel in Las Vegas. The secret to his success? “I wasn’t shy,” he says. “I like people.”

At left, Clint Eastwood, San Francisco, 1971. as “Dirty Harry.” “He gets the guy to crash the bus into this big sand pile and jumps in and comes up with his .44 magnum or whatever the hell it is but the dirt pile wasn’t enough. The prop people went in and put Hollywood dirt on it, which is potter’s clay, so that when you hit, it puffs. I love that.”

At right, Mario Puzo, Hollywood, California, 1970. “Writing the screenplay for ‘The Godfather’ at Paramount Studios. Puzo was a very gregarious guy, and he talked about himself in the third person. They asked him who should write the screenplay for ‘The Godfather’ and he said, ‘Only one guy can write the screenplay—and that’s Mario Puzo!’ We went to Vegas on the gambler’s package and stayed in the Bugsy Siegel suite. We’re sitting in a restaurant and a waiter delivers a round of drinks. The waiter and Mario have a small conversation, and he nods to a guy sitting at the bar. Who bought our drinks, I ask. Mario says, ‘That guy’s with the mob. They love me.’ ” 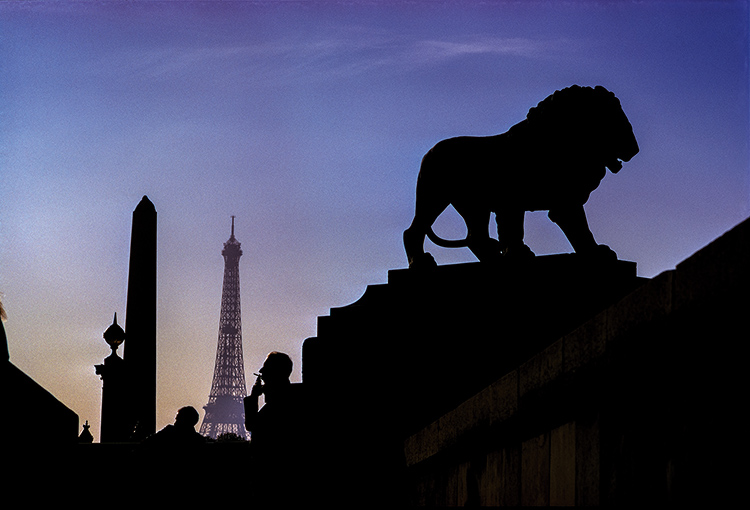 Smoker at Place de la Concorde near the Galerie Nationale du Jeu de Paume, Paris, 1973.
“I came up out of the tunnel, saw this, and knocked off a couple of shots.” 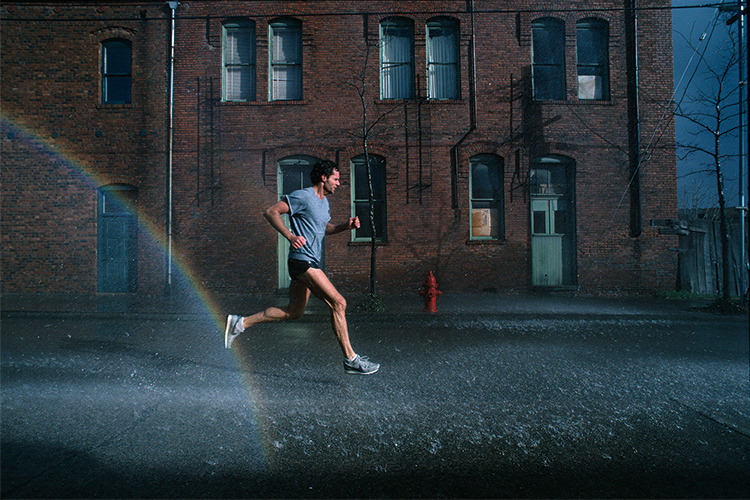 Seattle, 1984, the Nike Pegasus poster. “David Kennedy art-directed this. We had rain power up with the Dumas brothers so he could say, ‘Give me rain.’ As we were shooting, the rainbow happened, and went right through the guy’s shoe. Today, they would accuse you of Photoshopping.” 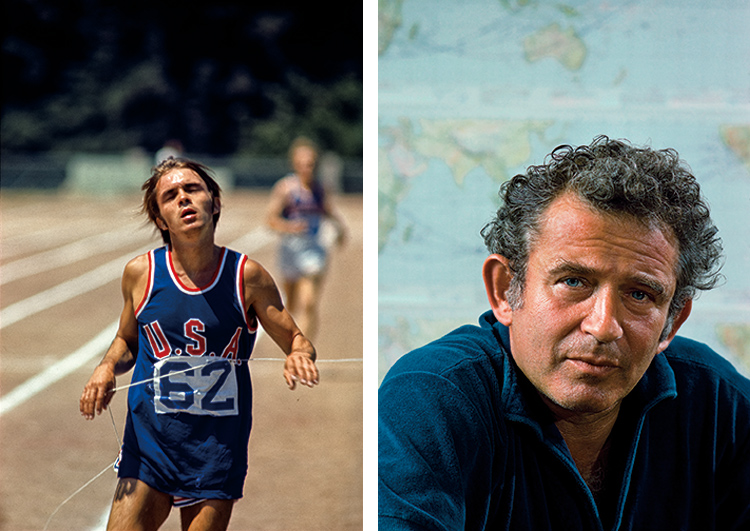 At left, Steve Prefontaine, Hayward Field, Eugene, Oregon, 1972. “This was at the Olympic Trials, 5,000 meters, for Sports Illustrated. My assistant was Denny Strickland. He loved to go down there and have a press credential. The first time we drove to Eugene, I had just gotten a little Mazda with a sunroof. Denny came out and got in the car, and he had a towel, and in the towel, he had lemons. He would sit back in his seat and rub the lemons on his teeth, and sit like this in the car to try to get his teeth whitened.”

At right, Norman Mailer, Houston, Texas, 1969. “I photographed Mailer while he was writing ‘Of a Fire on the Moon.’ I got some maps of the world and hung them up behind him. Just took that one portrait and got back to New York and it made my first LIFE cover. It was cool. (My wife) Lynn was just about to have Cole, in natural childbirth. And when we were leaving for the hospital, she said oh my god. I forgot, when you do your breathing, you’re supposed to stare at something. So I tore off the cover of Mailer and stuck it on the wall and she stared into his ‘beautiful blue eyes’ while she gave birth to Cole.” 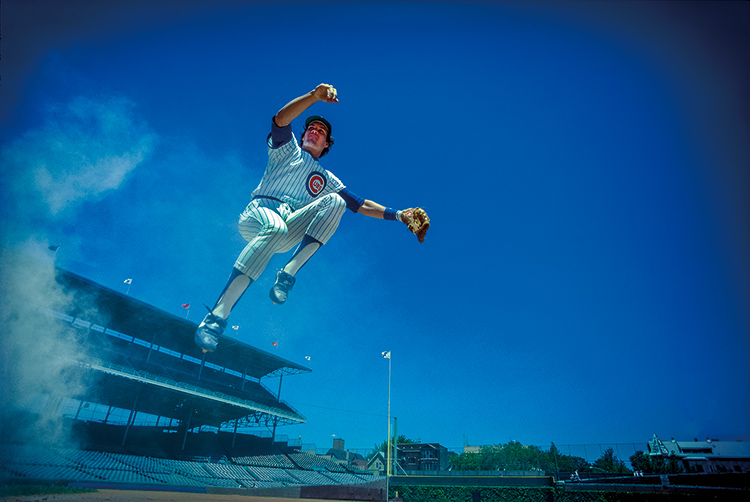 Ryne Sandberg, Wrigley Field, Chicago, 1984. “I wish I’d kept a daybook. James O’Mara keeps a daybook. Walter Iooss keeps a daybook. I just bumble along with no sense of history. A guy wrote a piece about me for a shoe magazine, and he said, ‘Did you ever have a feeling that people would care about your Nike ads 30 years later?’ and I said, ‘No, I was just trying to get the shot.’ But it was pretty cool to have all of Wrigley Field to myself. When we did James Lofton, the wide receiver, I had Lambeau Field, just me and the art director and Lofton. I said, ‘Jimmy Lofton? Jim?’ He said, “No. James.’ ” 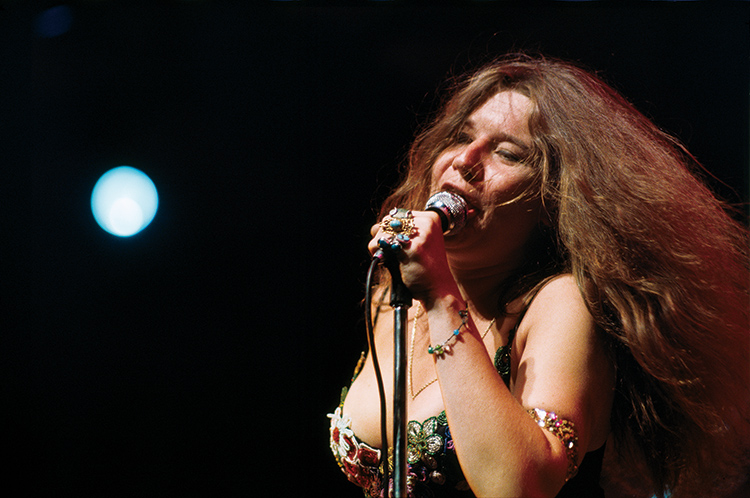 Janis Joplin, Newport Folk Festival, Rhode Island, 1968. “I didn’t see her whole show, but (my wife) Lynn did. She found herself on her feet, cheering and clapping, because Janis was just so electric.” 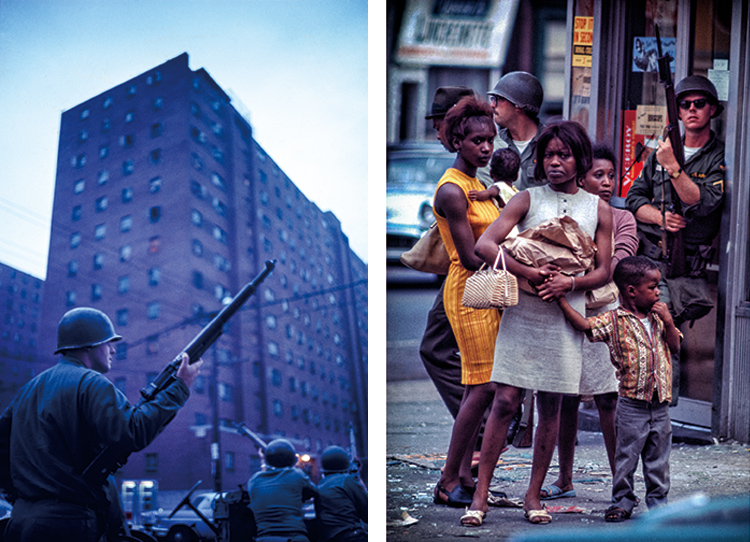 Newark, New Jersey, 1967. The Newark riots. “I have pictures of army trucks going up and down the streets. Cops with their guns out standing around. You can’t really see it but those were National Guard guys and there’s blown-out windows, and one of the apartments in that building was covered with bullet holes. They really did a number on the place. There was another photographer assigned by LIFE named Frank Dandridge. A black guy, later became a film director. We’re riding around in a car at night, both of us holding our cameras, and finally he looks over at me and says, you know, whitey, riding around with you could get me killed here. And I said, well, vice versa. Fortunately, we both made it through the night.” 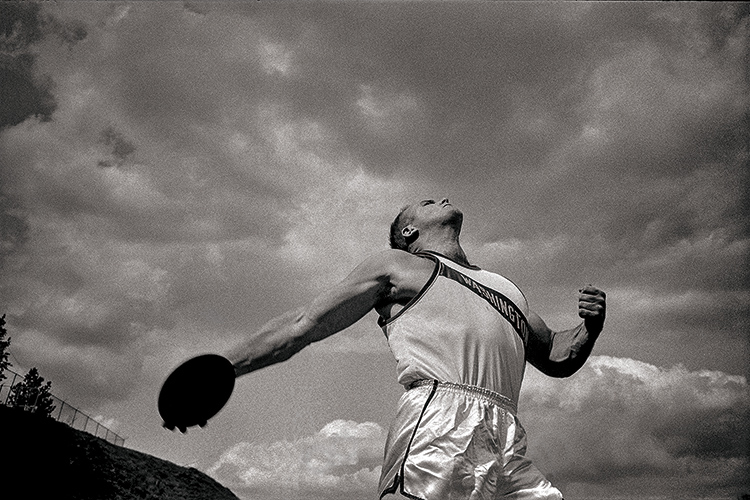 Tony Angell, Seattle, 1960. “A former UW track star. One of the first guys to do isometrics. Tony’s a great sculptor, and he’s written several books about birds. He gave us advice about crows. You don’t want to upset them. They rule, and they know your face. I like his credo: ‘A scientist can tell you what is, an artist can tell you what’s possible.’ His book on owls is a hoot.” 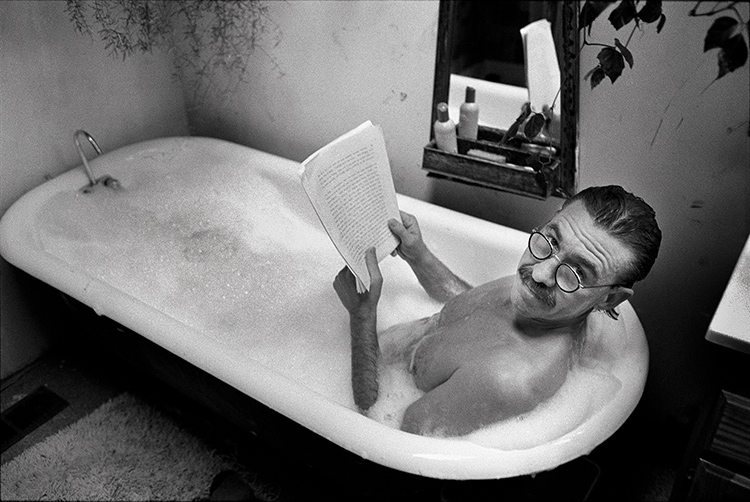 Tom Spanbauer, Portland, Oregon, 1993. Writer, editor and teacher of “Dangerous Writing.” “He told me he did his best editing in the tub. I don’t think there’s anything more to say.”