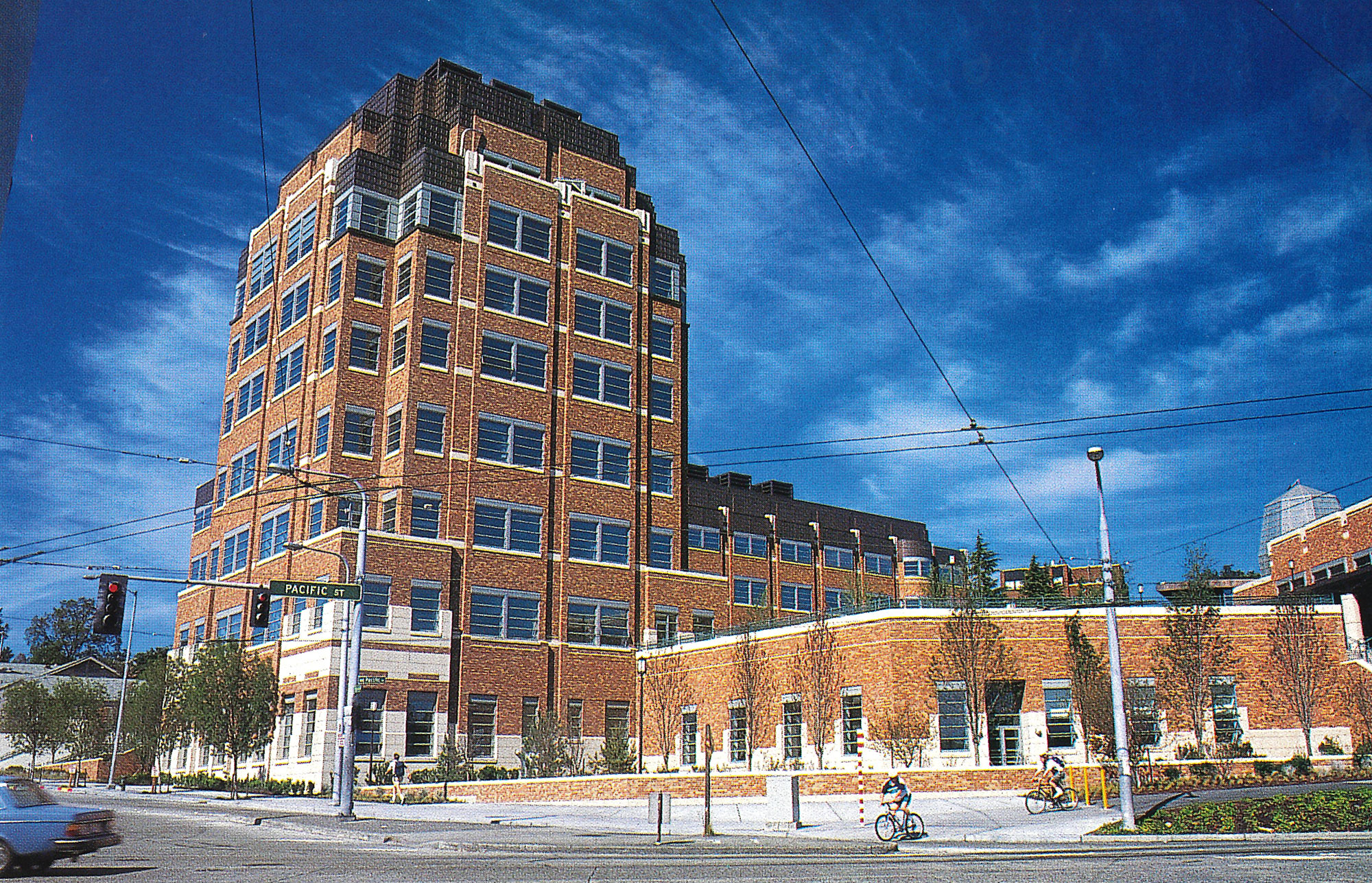 The hard science of physics and the soft art of architecture unite in a new campus landmark that opens this month, the Physics/Astronomy Building. Designed by architect Cesar Pelli and the Seattle firm NBBJ, the $76.5 million building sits at the northeast corner of 15th Avenue NE and Pacific Street, formerly the site of the Penthouse Theatre and a parking lot.

While the structure was designed to meet the demands of 21st century science, its brick walls and copper rooflines echo elements of the UW’s Collegiate Gothic architecture.

“You have a very beautiful, coherent campus,” Pelli told the UW Architectural Commission in 1990. “We tried to interpret that character so that we can extend it.” The architect said he wanted the new building to be “harmonious and in the family of the older, Gothic buildings, but still be of our time.”

The result is a spectacular grouping of three above-ground structures and a huge basement laboratory section that makes up one-third of the entire working space. The basement links up with Kincaid Hall, giving zoology extra lab space as well. 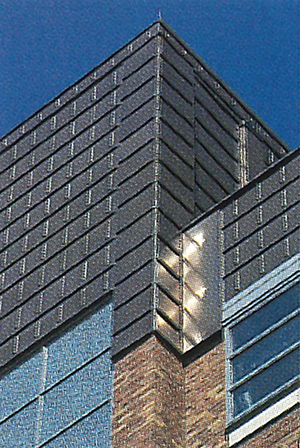 The three building elements consist of an auditorium wing with a swooping roofline, a soaring six-story office and library tower, and a four-story horizontal wing for labs and offices.

Between these structures is a plaza with grass, full-size trees and even a small cafe. “It will be a major public space within the scale of other courtyards on campus,” Pelli said in 1990. “It will not look like a plaza on top of a parking garage but a real courtyard on the ground with trees and foundation plantings.”

Pelli wanted the building to broadcast its function from the outside in, so he included several unique design elements to signify this structure was for physics and astronomy.

On the south wall of the auditorium wing, facing Pacific Street, is a sundial, a giant web of green tubing designed by Astronomy Professor Woodruff Sullivan.

At eye-level around the tower and bar, blasted into cast stone, are 30 formulae and diagrams, including a representation of Nobel Prize-winning Professor Hans Dehmelt’s electron trap. 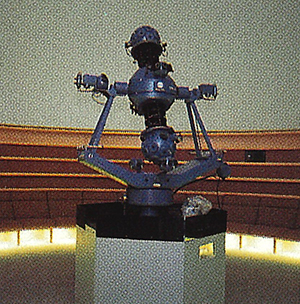 The building includes a teaching planetarium.

The roof of the auditorium wing is punctuated by a glass dome. Inside the dome is a Foucault pendulum, which demonstrates the rotation of the Earth. Yet another design element, a pattern frosted onto the glass in two stairwells, represents a 10-fold symmetry found in “quaisicrystals.”

Physics Chair Mark McDermott says his department desperately needed a new building. The old Physics Hall, built in 1928 and 1949, was showing its age. Mineral deposits in the plumbing forced scientists to use garden hoses to get proper water pressure for some experiments.

Undergraduate lab space was so tight that sections had to be held on Saturdays and Sundays. Since the old building had first-floor research labs and third-floor classrooms, students constantly marched past sensitive equipment, forcing many physicists to conduct experiments at night instead. 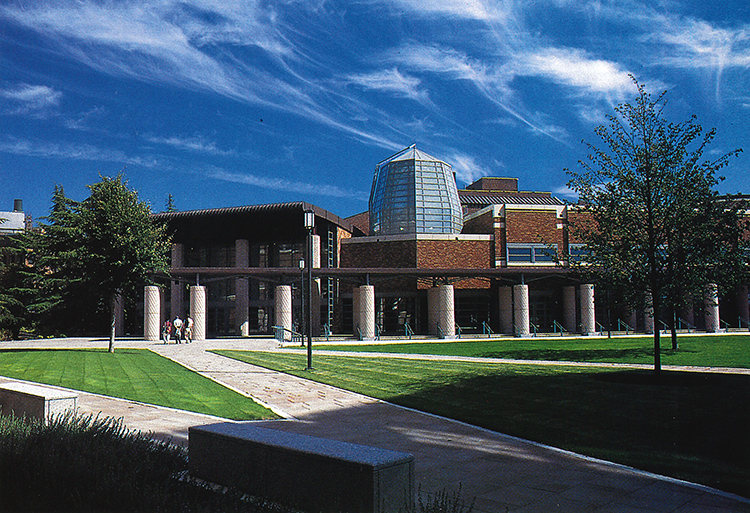 A glass dome sits atop the auditorium wing. In the foreground, o grassy plaza disguises the roof of basement research labs. One third of the building’s space is underground.

Studies comparing the UW physics department to other top programs in the nation found that the UW had 40 percent less space. With the new 270,000-square-foot building—about a 40 percent increase over current space—”we’ve brought ourselves up to the national standard,” McDermott says. 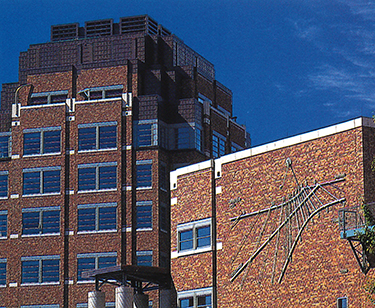 Designed by Astronomy Professor Woody Sullivan and built by the physics/astronomy machine shop, this futuristic web of green fiberglass represents a sundial.

Compared to the old building, instructional use got a greater space increase than did research or office uses. Undergraduates have four new auditoria, a planetarium, classrooms, and adaptable, first-floor lab space that can meet future demands.

“There is no doubt that the availability of the facility makes a difference,” he says.

The building also serves as a link to a new part of the University, the reborn Southwest Campus. The physics court­yard will be the starting point of a major vista similar to Rainier Vista. In this scheme, instead of a mountain, viewers will see the Space Needle in the distance. Thus a world-class campus landmark, built for the 21st century, will look at an artifact of an earlier era, built for an world-class exhibition titled “Century 21.”

The H-Wing Addition, the Biological Sciences Research Building, and the Chemistry Building.

The new Physics/ Astronomy Building may be the most visible construction project on campus, but three other buildings also are being completed to meet the demands of 21st century teaching and research.

H-WING ADDITION: A 120,000-square-foot addition to the Health Sciences Center north of the South Campus Center, this new wing has six floors above ground and two basement levels. The precast concrete structure, opening Sept. 1, unites the School of Pharmacy after decades of division. The school had been split between Bagley Hall on Upper Campus and the T-Wing of the Health Sciences Center. The Department of Immunology will occupy the third and fourth floors and the School of Public Health and Community Medicine will have office space on the top floor. The architectural firm for the project is TRA of Seattle. Total cost: $52 million.

BIOLOGICAL SCIENCES RESEARCH BUILDING: For the first time in more than 20 years, the School of Medicine will get a significant increase in research space with the opening of the Biological Sciences Research Building in spring of 1995. The 224,000-square-foot structure is set at the west end of the Health Sciences Center complex, just south of Hitchcock Hall. This concrete structure, featuring warm gray tiles and bands of paint, has six above-grade stories and a basement level. Most floors have 10 large laboratories plus a support area and offices. The third floor will house the new Department of Molecular Biotechnology, headed by Professor Leroy Hood and launched with a $12.2-million gift from Microsoft CEO William Gates III. Other research groups include the Alzheimer Disease Research Center, the Lucille P. Markey Genetic Medicine Center, the Biomolecular Structure Program and the W.M. Keck Center for Advanced Studies of Neural Signaling. MBT Associates of San Francisco was the architectural firm. Total cost: $71.5 million.

CHEMISTRY BUILDING: The internationally recognized firm of Moore Ruble Yudell designed this postmodern addition to Bagley Hall, sited just south of the chemistry building facing Frosh Pond. The 108,000-square-foot structure is clad in brick and includes a breezeway between the new building and Bagley. Its style puts it in context with the Collegiate Gothic look of Upper Campus buildings. When it opens during the 1995 Winter Quarter, it will provide chemistry with teaching and research laboratories and support space. It will also house a 750 MHz nuclear magnetic resonance spectrometer.· Total cost: $40 million.