When Cecile Richards came to campus to talk about her new book, "Make Trouble," the mostly female crowd knew they were listening to one of the most influential women in American politics—even if she wasn't a politician.

That’s why the crowd cheered when Richards, the president of Planned Parenthood since 2006, declared that “women are shaking the foundation of this country in every possible way.”

The quote came when the event’s emcee, feminist author and New York Times columnist Lindy West, asked about the politics of reproductive rights. Richards went on to say this about women: “If there were ever a time to think about what’s the right thing to do and what’s the politically smart thing to do, it’s to stand with them, and to show that you have a backbone.”

Richards, daughter of late Texas governor Ann Richards, has steered Planned Parenthood through rapid expansion and tumultuous political times. While its donors and supporters now number 11.5 million, the organization still faces a steady current of opposition from lawmakers and abortion opponents. And clinics in Pullman and Colorado Springs have been firebombed and attacked by a gunman in recent years. 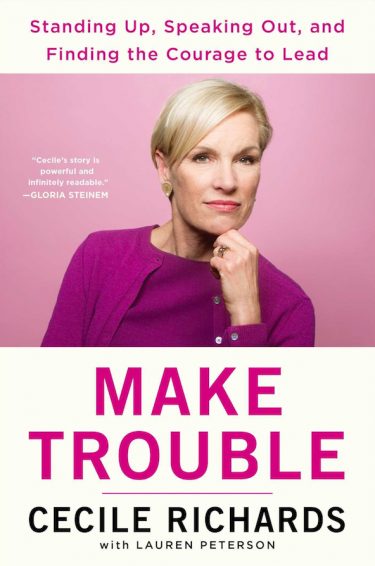 West, a former editor at The Stranger, started the social media campaign #ShoutYourAbortion in 2015. It encourages women to “talk about abortion on our own terms.” While the Supreme Court legalized the procedure in 1973, polls still find the American public split on this emotionally charged issue.

As she entered her 12th year at Planned Parenthood this January, Richards announced that she will step down from the organization in 2018.

“I think it’s time for me to make room for somebody else to come in—a whole new generation of leadership,” she said. “You can’t invite people in and train up a bunch of new folks and then not make room for them to take power.”

As for her future, Richards, a Democrat like her mother, is often asked if she will formally enter politics. She never rules out the possibility, but tends to shift the focus to what can be done by other people, particularly women. She described the long odds that her mother, a divorcée and recovering alcoholic, faced when running for statewide office in Texas in 1990. “We do it even when they say we can’t,” she said. “Do more than you ever thought you could, because that’s what this moment is about.”

Watch the full talk below.