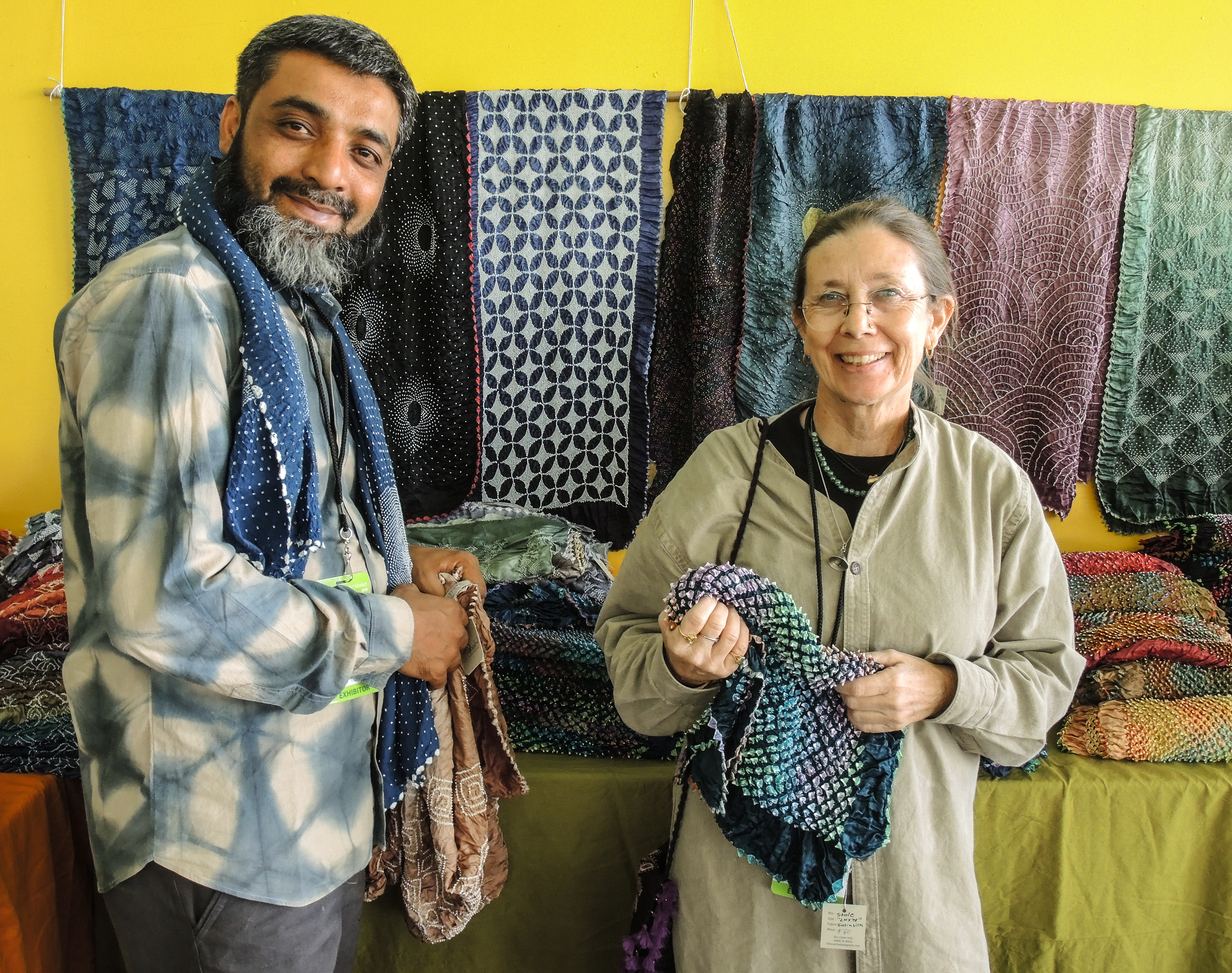 Judy Frater, '87, put her UW museology degree to good use by seeking out and empowering local Indian artisans.

For the past 30 years, Judy Frater lived in India, devoting her life to saving traditional crafts in Gujarat, a northwest state with some of India’s most exquisite weaving and embroidery traditions. She founded a design school for artisans that’s India’s first, with a graduate course in business and management as well as a textile museum.

Along the way, she racked up an impressive number of awards: a social entrepreneurship fellowship from The Ashoka Foundation, which honors change-makers who improve the world by solving social problems; Fulbright and Ford Foundation grants; a Costume Society of America award for her book, a Crafts Council of India award; and the Sir Misha Black medal, a British design education award in Britain. Her illustrious life’s work stems from her graduate degree in museology from the UW’s Anthropology Department. Frater, ’87, wrote her UW postdoctoral thesis on tracing the history of a people through their traditional textiles, using the Rabari, a nomadic ethnic group in Gujarat, as an example. Later, she expanded that thesis into her book, “Threads of Identity.”

“I feel I am so lucky to have the opportunity to work with such wonderfully creative people. It’s the greatest joy to watch them grow,” says Frater, now 71. To date, about 200 artisans from seven ethnic groups in 25 villages in Kutch, a desert region in Gujarat near Pakistan, have studied at the design school, which opened in 2005 and now operates as Somaiya Kala Vidya in Kutch. One craft is ajrakh block printing, where ornate floral and geometric patterns are stamped with wood blocks on fabric covered with paste, which is then plunged into repeated baths of dyes made from plants like pomegranates and madder. Another is bandhani, a tie-dye technique where the artisan pinches fabric into thousands of tiny dots, then ties them into knots before dyeing them.

The school grew out of the Kala Raksha Trust, which Frater co-founded with an Indian law student back in 1991 as an income-generation project to support local artisans by introducing them to contemporary markets. It opened a textile museum in 1997 to be a resource and inspiration source for local artisans and also non-local designers and researchers. Frater donated her best Kutch textiles from a vast collection she amassed. Products inspired by the Kala Raksha Museum’s almost 800 objects, from quilts, cushion covers, clothing, wall hangings, bags to table runners, are for sale on the museum’s website. 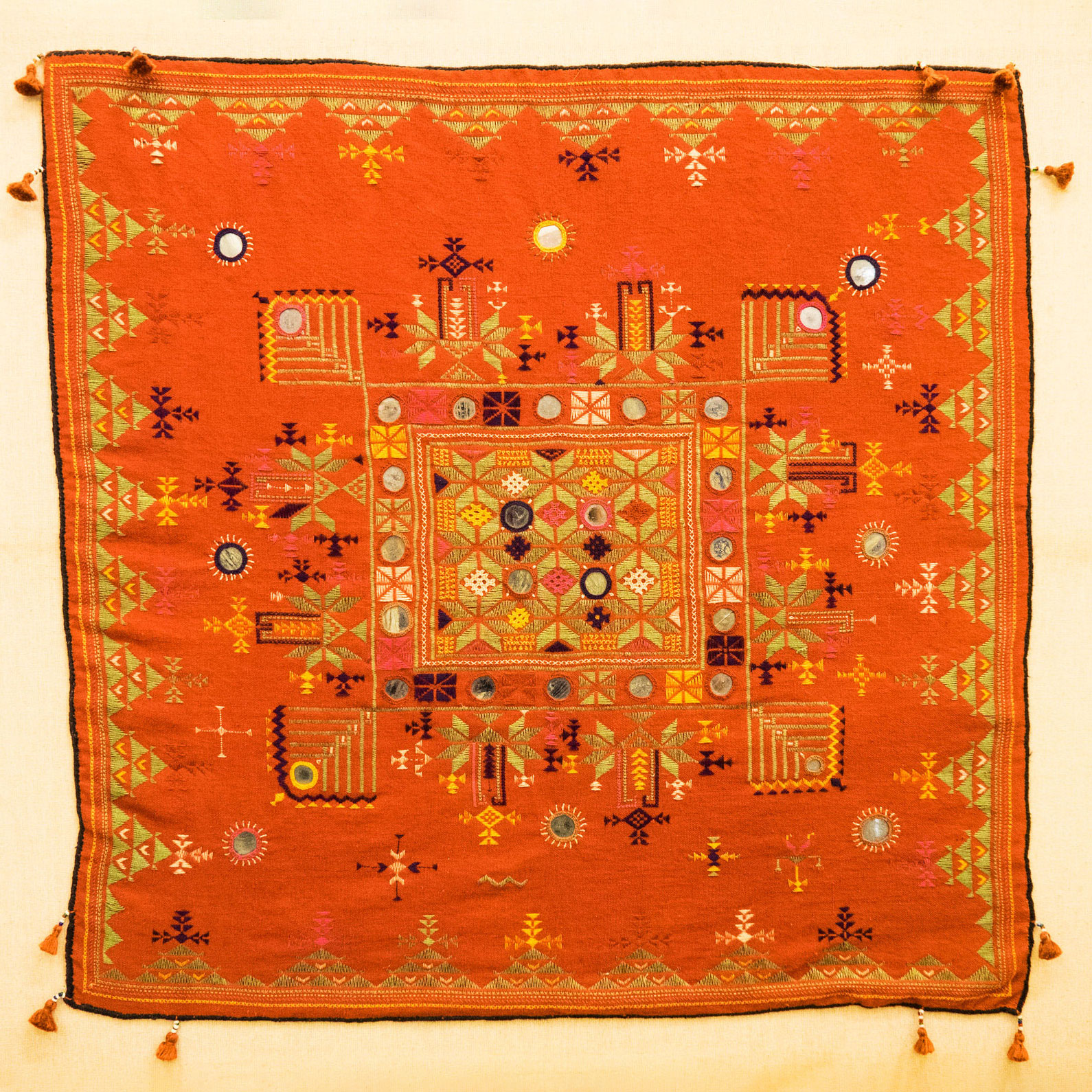 From the Tharparkar in Pakistan, this rumal — a ceremonial covering for food given as part of a girl’s dowry — is embroidered using cotton, silk, mirrors, beads and cowrie shell tassels. 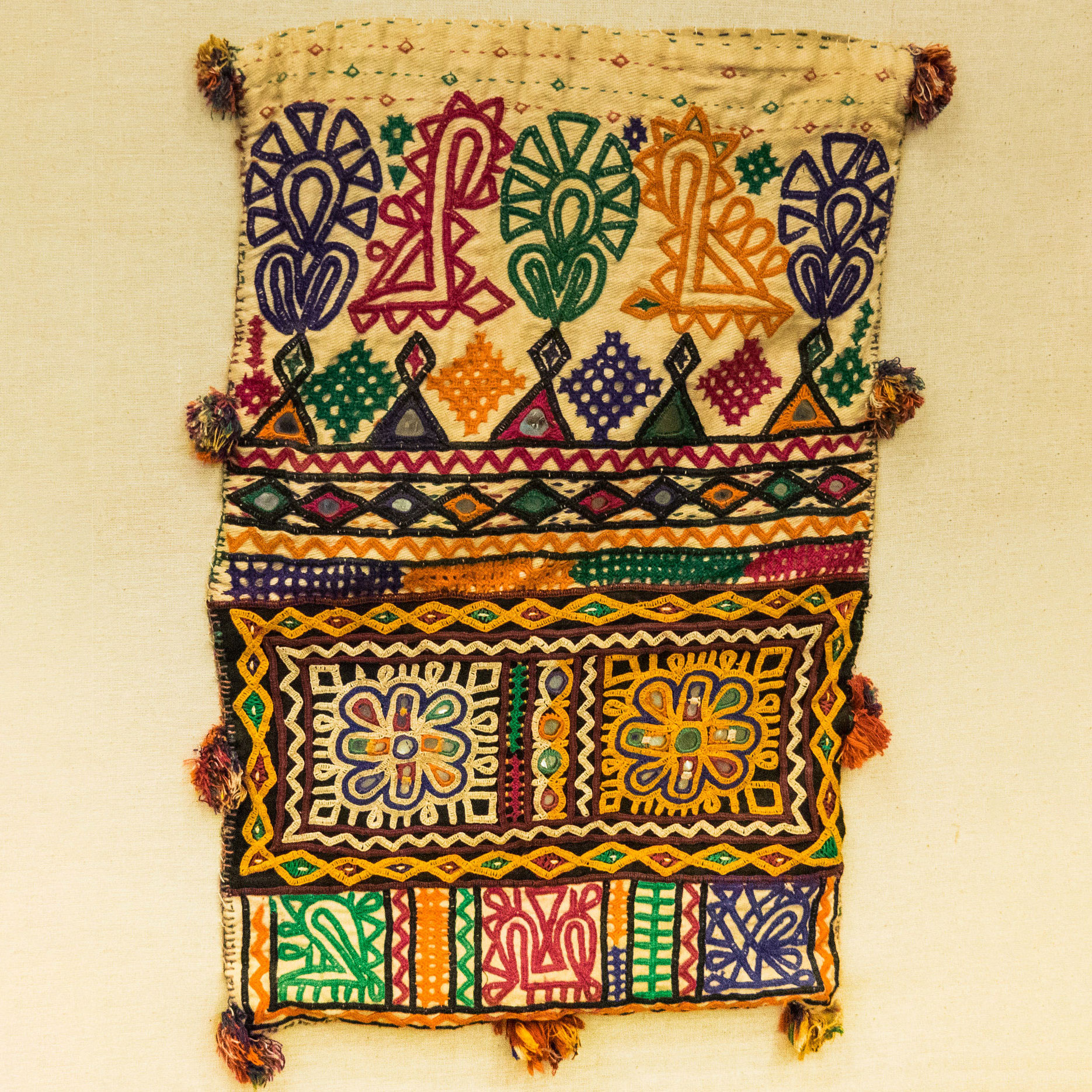 A kothali, pictured above, is a Kacchi Rabari craft from Kutch. It’s a dowry bag used to carry smaller items. 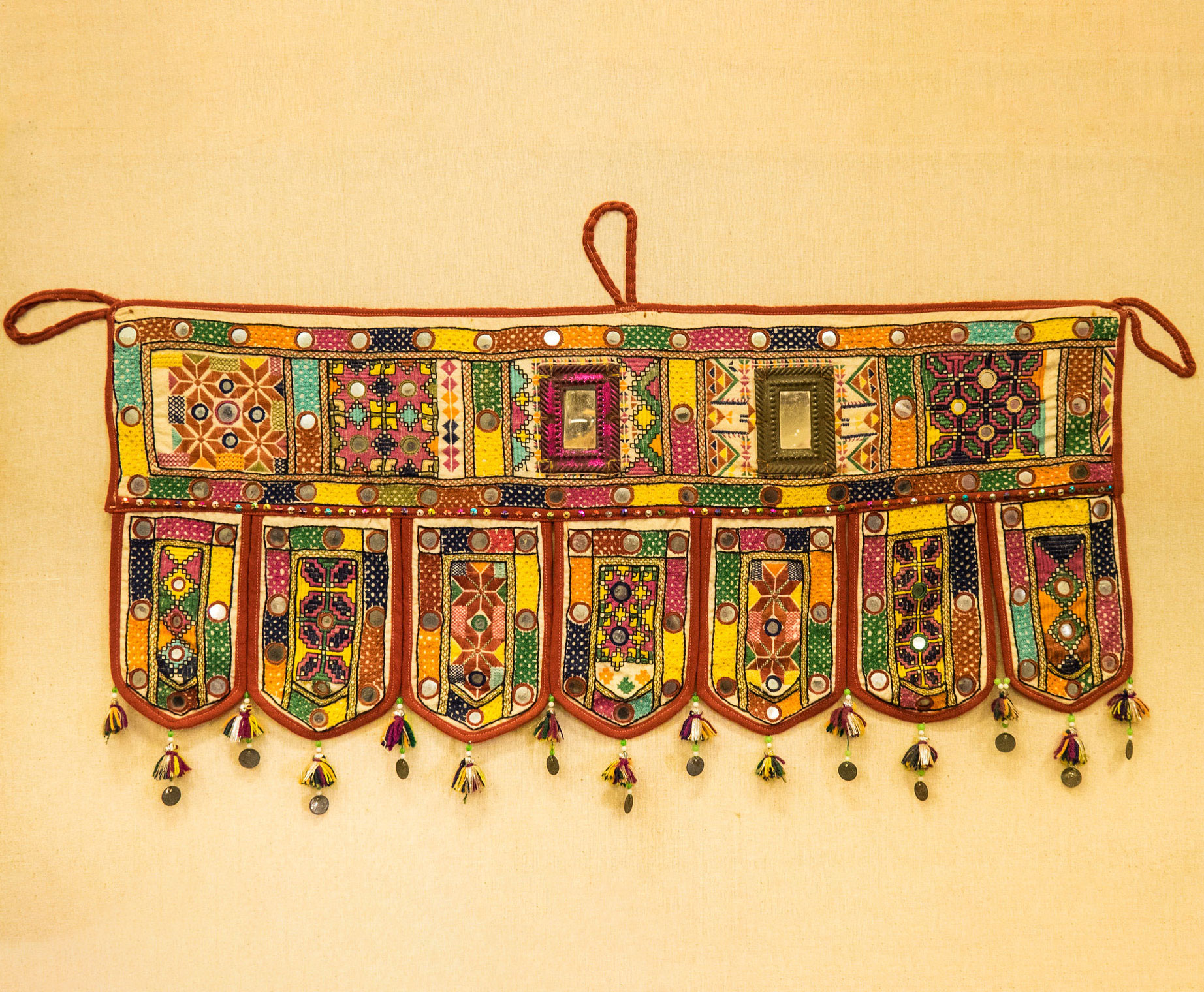 This doorway hanging called a toran is used by Hindus in Sindh, Gujarat and Rajasthan. The hanging fabric pieces resemble mango leaves. 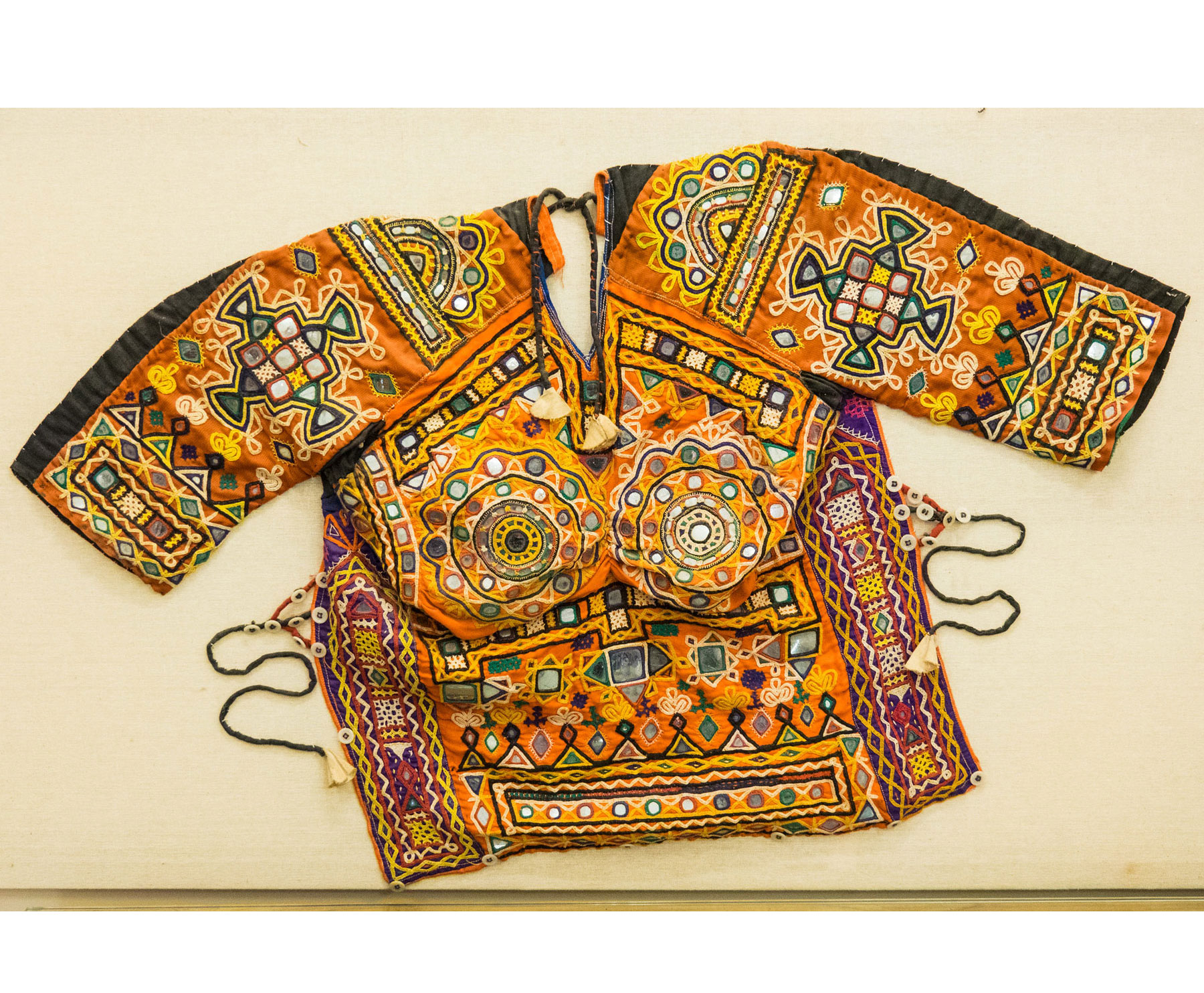 This Kachhi Rabari blouse, exhibited in the Kala Raksha museum, is a shorter, more fitted blouse worn by married women for auspicious occasions.

In 2014, Frater joined forces with the philanthropic trust of a business empire started by India’s so-called “Sugar King” to found Somaiya Kala Vidya, adding a graduate business and management course for artisans to the core design course. Somaiya also holds classes in craft traditions for visitors and open studio tours to meet Kutch artisans in their villages.

“We encourage design innovation within traditions, and teach what a design school would teach. Things like how to design for a market, taking them to high-end shops in Ahmedabad and local markets to show the contrast, how to vary your design, how to take an abstract idea and apply it, and trends,” Frater said.

But her passion for India, and textiles, began long before the UW. The Pennsylvania native first saw India in 1970 as a college freshman and fell in love with its crafts. While earning her degree at Lawrence University in Appleton, Wisc., she embarked on a study-abroad program in Pune, a city about 75 miles south of Mumbai, learning traditional craft design. Struck by a film on Gujarat crafts, she persuaded some fellow students to travel to Kutch with her, undaunted when guidebook maps showed no roads.

“Do what you want, my mother said. Nobody had ever told me that before, including her,” Frater laughs. “The program didn’t cost more than studying at Lawrence. I loved textiles since I was a kid, learning batik and fabric printing from library books.” She planned to study art. “I tried convincing the art department textiles were a bona fide art form, but they weren’t buying it,” she said, so she ended up with a double major in anthropology and education, a self-designed program. “This was a wonderfully open time in education, when they started experimenting with students designing their own courses.” That was perfect for Frater. “I was always very self-motivated.” At one point, she decided sleep was a waste of time, so she took 15-minute naps for several weeks. Her advisor asked wonderingly if she had really read all the books she listed.

She chose the UW for her second graduate degree since it was the only museology program in an anthropology department she could find; the rest were in art history departments. Frater recalls it as a “really rigorous” program, and Dr. Simon Ottenberg, a German-born anthropologist and West Africa expert, was her advisor. Her first graduate degree was in South Asian Studies at University of Minnesota, where she wrote an anthropology thesis on the tension of maintaining and adapting culture among nomadic people. “My first master’s was theory,” Frater said, “[and] my second was application.”

“What changed her life was a simple question: Why are you studying us – why don’t you help us?”

Back in 1975, she organized a traveling exhibit about Indian textiles, lecturing on how to understand a culture through its material objects all over the Midwest, finding schools, libraries and museums willing to pay her – decades before the Internet. “I feel my research skills were better then,” she chuckles. She also collected Indian art for UW’s Henry Art Gallery.

What changed her life was a simple question: “Why are you studying us – why don’t you help us?” an embroiderer in Kutch asked. “It was like someone hitting me over the head with a hammer,” recalls Frater, then in India on a Fulbright in 1990-91, on leave from her job at the Textile Museum in Washington, D.C. as associate curator of Eastern Hemisphere textiles.

Retired in 2020 but restless, Frater now lives in Santa Fe, New Mexico – whose Museum of International Folk Art bought her collection of Rabari textiles years ago. She plans to take tour groups to India and hold trunk shows of artisans’ work and workshops in craft connoisseurship. Fluent in Gujarati and Marathi (spoken in Maharashtra state, where Mumbai and Pune are located), with a basic knowledge of Hindi, she’s led India tours for tour operator Myths & Mountains and the Textile Museum. The subcontinent’s spell, cast years ago, survives still.