If you took a music course during the ’30s or ’40s, your classroom might have been in the same spot where Thomas Franklin Kane ate his breakfast each morning or where Henry Suzzallo did his evening reading.

Once upon a time, the UW president lived right on the campus grounds. The president’s house sat at the end of what would become the University’s quadrangle, the site of today’s Music Building. It was originally built for the 1909 Alaska-Yukon Pacific Exposition, serving as that fair’s New York State Building, which housed exhibits from the Empire State.

One of the few permanent structures left after the fair, it was made with a wood frame and stucco when most of the exposition buildings were made of a heavy papier-maché and fitted with elaborate façades — only to be demolished after the exhibition.

After the fair, the UW remodeled the building to serve as the president’s house. It saw many famous visitors, such as former President Theodore Roosevelt, who visited campus in 1911, or French actress Sarah Bernhardt, who toured the UW in 1913. 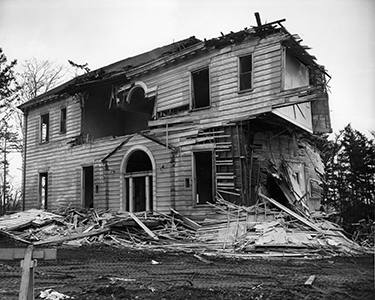 But its most historic event was the night of Oct. 4, 1926, when students learned that the Board of Regents had fired UW President Henry Suzzallo. The students marched to the house, calling for a strike the next morning. Suzzallo stood on the doorstep and urged the angry students to go to class instead. The next day, they followed his advice and student unrest at the UW didn’t return in force until the 1960s.

According to UW records, the next president, M. Lyle Spencer, did not stay in the president’s house very long. A year after Suzzallo was fired, the UW remodeled the structure for its School of Music.

It is not clear where the Spencer family lived for the next few years, but in 1931 they became the first UW residents of what is now the official home of the UW president in Washington Park. Lumber executive and banker Edwin Gardner Ames donated the Walker-Ames property to the University after the death of his wife, Maud Walker Ames.

“Mr. Ames’s residence has long been known as one of the city’s fine homes and the generosity which caused its presentation will be the means of enriching many vital phases of the University’s life,” the Washington Alumnus reported.

Over the next 73 years, the residence has been the home of 11 UW presidents. This January UW President Mark Emmert, ’75, and his wife, DeLaine, moved in after a six-month renovation.

Back on campus, the UW covered the original stucco of the old Music Building with wood siding. But the exterior remodel couldn’t cover up the building’s age — or its unsuitability as a music facility. In 1950, the only president’s residence ever placed on the UW campus gave way to the wrecking ball and a new Music Building.