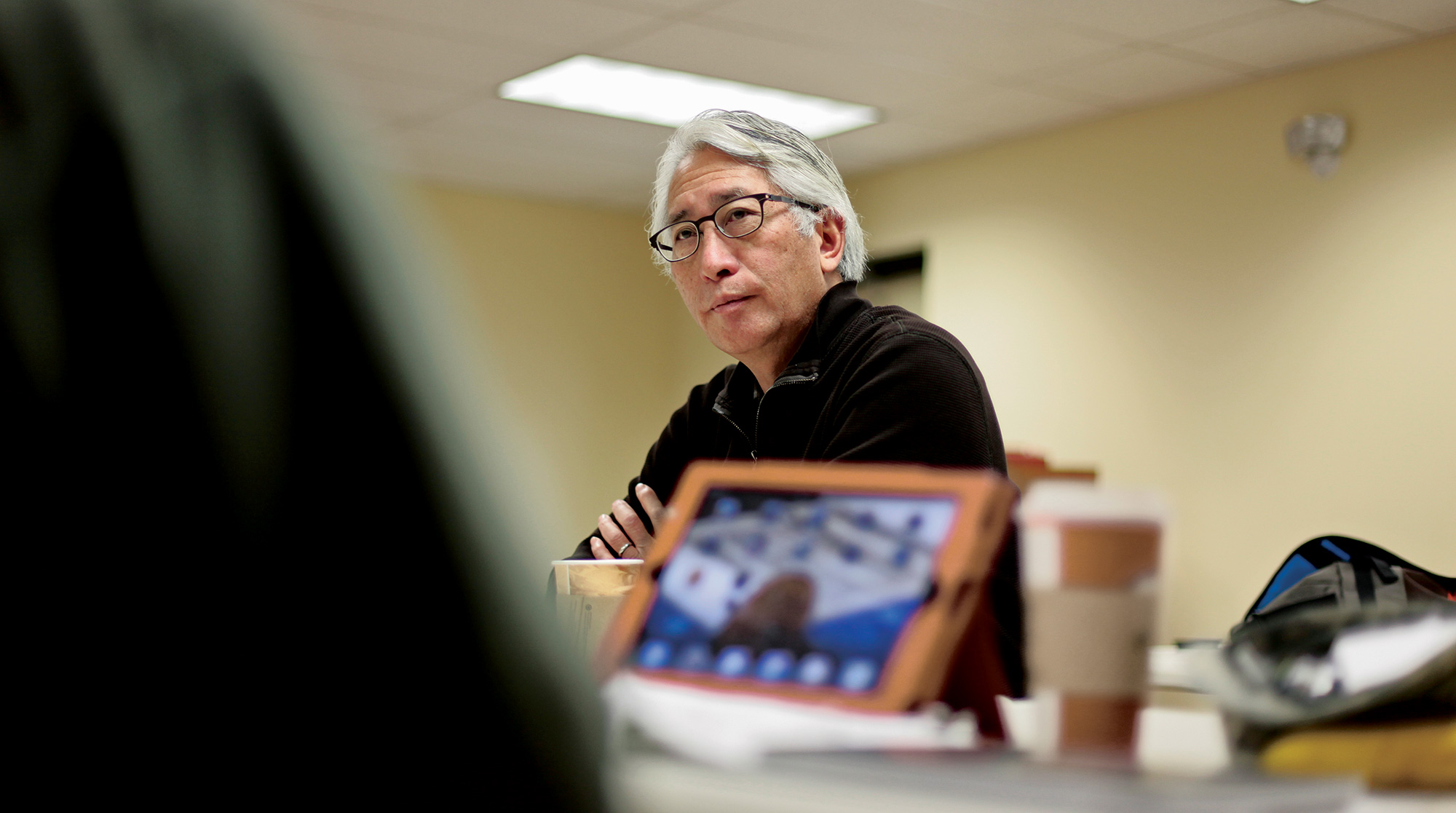 A W.B. Yeats quote greets soldiers as they enter the classroom of Shawn Wong at Joint Base Lewis-McChord on a frosty, fall morning: “Write about yourself when you are most like yourself.” A UW professor since 1984, and former chair of the English Department and director of the Creative Writing Program, Wong has taught college students to become storytellers. Far from the UW campus, however, the quote holds new meaning. For many soldiers, voicing their experiences is literally lifesaving.

Wong is one of four instructors volunteering with the Red Badge Project, which launched last August at Joint Base Lewis-McChord. A nonprofit in partnership with the military, the Red Badge Project teaches soldiers in the Warrior Transition Battalion to express themselves through photography, filmmaking and creative writing. The battalion is comprised of active-duty, Guard and Reserve soldiers diagnosed with post-traumatic stress disorder (PTSD) and other injuries.

“When you find out that more soldiers committed suicide than were killed in Afghanistan last year (2012), you feel you have to do something,” Wong says. “If we can prevent one suicide by helping somebody tell their story, then we’ve done what we’re supposed to be doing.”

The Red Badge Project was co-founded by movie star Tom Skerritt, an Air Force veteran, and his neighbor, Evan Bailey, a former Army captain. Skerritt serves as one of the project’s film instructors, along with screenwriters Brian McDonald and Warren Etheredge. Class is four hours daily for three weeks and participation is voluntary.

“They request to be here. It’s interesting because when their session is over and they graduate, about a third of them keep coming to class anyway,” says Wong.

Alumni are passionate about further involvement. A current effort is compiling written work with the hope of eventually publishing a short-story collection.

Soldiers range in rank and are in their early 20s to mid-50s. Some are initially so withdrawn, they’re unable to even make eye contact. Amazingly, the walls often come down as soon as the third day of instruction. Students become fully engaged, eagerly pouring their thoughts into composition notebooks.

“It was kind of cathartic taking the stuff from the last couple years and finally putting it on paper. I don’t know why, but it helps clarify things.”

One Red Badge student, a First Lieutenant, now volunteers with the program. He joined the Army in 2004 and has served around the world including multiple tours in Iraq and Afghanistan. He struggled with the “high cost” of his experiences – the injuries and deaths of friends and transitioning from deployment to returning stateside. He credits the Red Badge Project with helping stop his “slow, but increasing spiral.”

”It was kind of cathartic taking the stuff from the last couple years and finally putting it on paper. I don’t know why, but it helps clarify things,” he says.

The First Lieutenant, a university graduate with a degree in English, occasionally wrote while overseas. However, the caliber of Red Badge’s instruction helped take his work to another level.

“Having an accomplished novelist and professor of English like Shawn (Wong) teaching, was so useful to me. There were certain techniques and exercises that I’d never considered before. It opened a door for my writing,” he explains.

Coursework includes analyzing short stories, writing exercises, polishing compositions and more. There are no tests, pop quizzes or grades of any kind. Even so, soldiers willingly complete homework and go above and beyond the call of duty to improve their skills.

“I don’t want them to just write abstract, adverb-filled pieces. They have to write well,” says Wong of his expectations. “In this classroom, I’m in charge. I outrank everybody!” he jokes, a statement contradicted by his students’ affectionate and robust laughter.

Considering the gravity of many discussions, humor is a constant balance. Skerritt is frequently enlisted to act in soldier-written scripts. “Any piece, no matter how serious, Tom always turns it into a comedy!” one student says, overcome with amusement.

Bonds form quickly over both laughter and tears. Instructors actively share their personal stories in order to connect with students. Soldiers cite this as a main component of the program’s success.

“We don’t want to be aloof or apart from them. I feel it’s an essential part of the healing process to recognize that we’re all just people,” says Skerritt.

Sessions are sometimes punctuated by the rapping of a .50 caliber machine gun or the chopping of Chinook helicopters – reminders that this is a distinctly different world. Surrounded by students in camouflage, Wong is unfazed. Having founded the UW’s Creative Writing Program in Rome, his teaching career has reinforced that a classroom can be anywhere in the world.

“Being (a professor) at the UW, you enter as one thing, but throughout the course of your career, you’re encouraged to continue learning like a student,” he says.

Wong looks forward to sharing the program with more UW colleagues. “Part of our job as a public institution is to do public scholarship and be in the community,” he says. For soldiers who have sacrificed immensely serving their country, Wong is gratified to now serve them. “In my 28 years teaching at the UW, this is one of the most rewarding and difficult teaching challenges I’ve ever faced.”