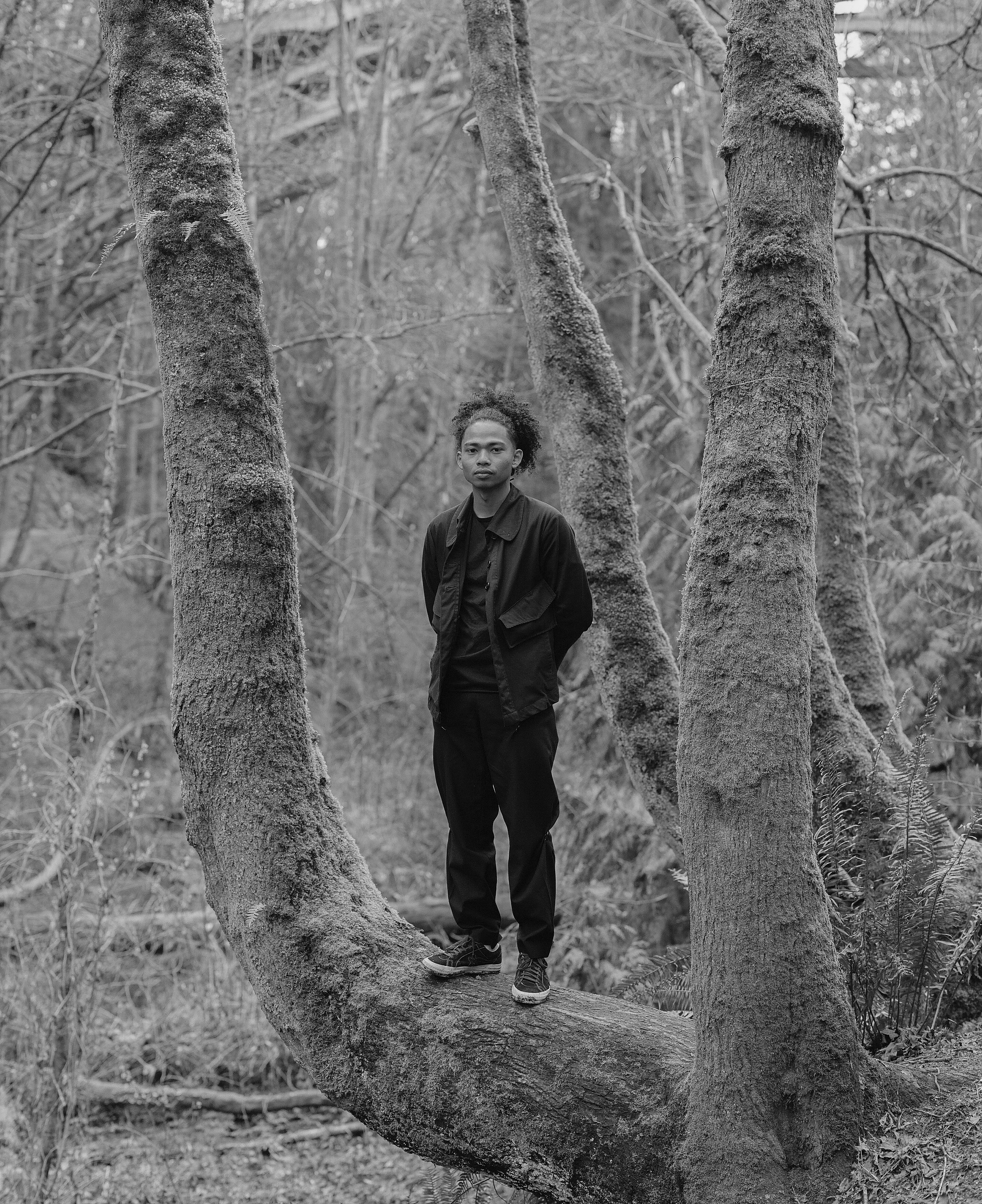 In high school, Shu Jones began sharing origami that took the form of paper lighting structures, art objects and meditations on shape. The philosophy behind these fold creations was that one fold could lead you down a completely new direction depending on where you applied the change. What has followed for Shu in the years following high school has been a winding road of new directions that have taken him from curiosity to curiosity. He’s dabbled in design work such as furniture making, 3D printing, illustration, and most recently footwear where he’s been a designer at Reebok and Guillermo Bravo since 2019. The multidisciplinary creative makes work, whether it’s for himself or for someone else, that melds nature with the manmade, and questions how we can create with the future in mind.

UW Magazine: Where do you get your inspiration from and how does nature play a role in your design process?

Shu Jones: From an inspiration standpoint I’ve always been into the way that materials behave based on their inherent properties. A lot of the time that’s manifested in human-built items. So I remember for a time in college I was really interested in construction sites and this fascination with places within our built environment that have high and low entropic states. There’s a lot of organization of raw materials that come together, which doesn’t necessarily happen all that often in nature. Everything tends towards entropy. And you get that same thing when they’re demolishing a building or deconstructing something. With those materials, everything is built based with the properties of their materials. With something as simple as steel or concrete, they derive their forms based on the way that steel bends or how concrete molds. I think a lot of the work I was doing during college was informed by this curiosity with manmade things.

UW Magazine: And this was when you were studying design at UW?

Jones: Yeah. I think now it’s shifted more to looking at the same sort of things but through the natural world and building with living materials. So obviously that brings us to our walk in this park today. For example, I’m looking at how moss grows on these dead bushes and trees, and thinking about ways in which we can design with nature, to borrow from Neri Oxman. This idea of material ecology where we build with the material itself or with the ecosystem in mind, and that you design not only the creation but also the decomposition or death of the material in mind. You obviously get a lot of that equilibrium in nature. Everything we’re stepping on is decomposing matter that has been perfectly engineered and designed. We can only try to observe and recreate what nature’s already perfected. So whatever lessons I can get, I’ll take!

UW Magazine: Why do you think it’s important to design with nature as opposed to without it?

Jones: I think we have a lot of examples of creating without nature, or without consideration of it. And that’s obviously led to discrepancy where our materials aren’t dying per se. They’re not going back into the ecosystem. 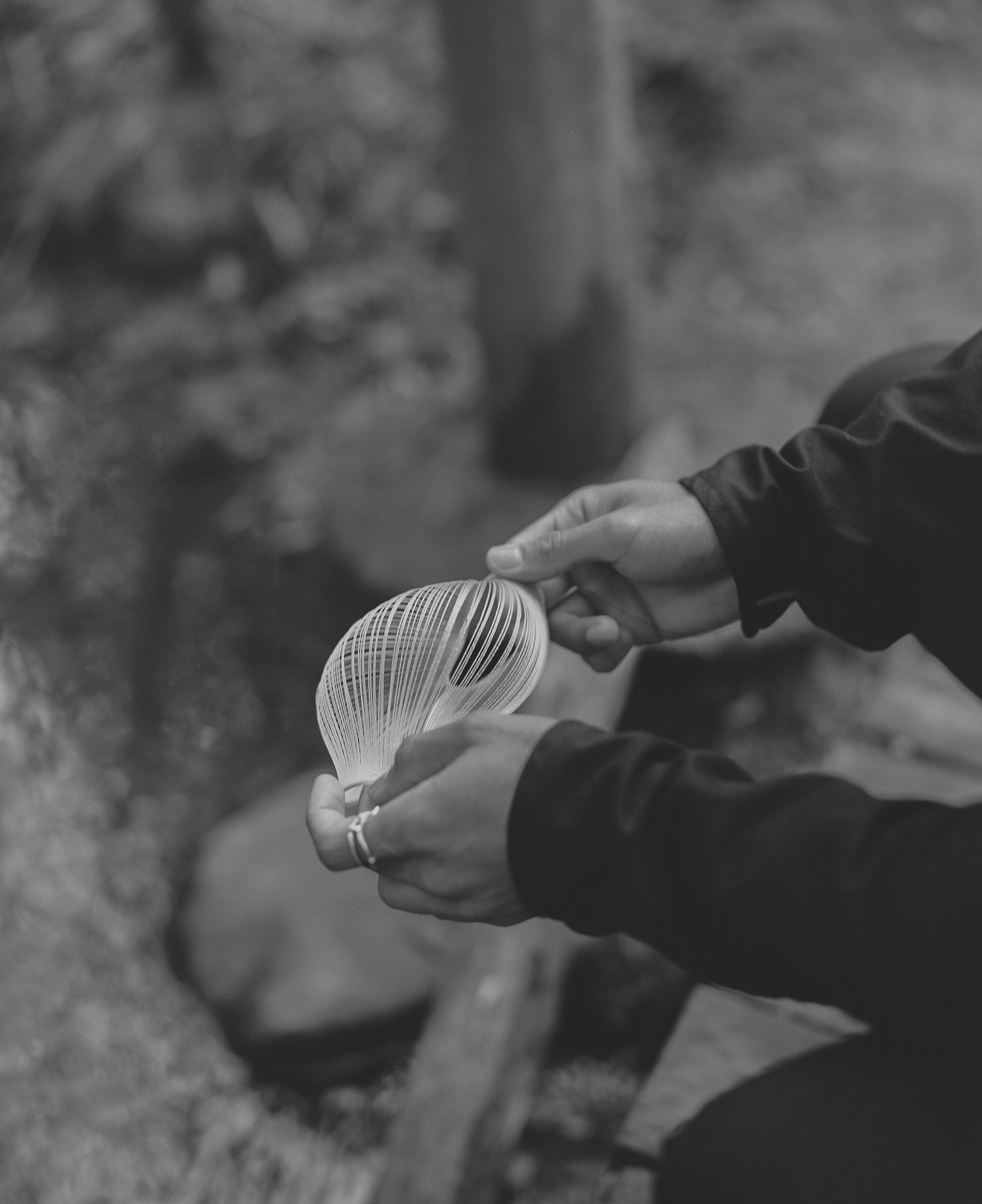 Jones: Exactly. And I think that incongruence isn’t sustainable, but in a lot of ways it’s such a simple fix. If we designed for the actual life cycle of the consumption. That is to say you design the death of the material for the intended life cycle or duration of use then you wouldn’t necessarily have the problem of waste but it can be captured back into the ecosystem or product manufacturing cycle rather than laying waste in the environment. It’s simple in a lot of ways, but also very complicated because we’ve already built the infrastructure for the way we manufacture things now. Even if it’s aspirational in any field of manufactured design or whatever you’re doing, it’s so important to have that conversation and to try design with that in mind. It’s the primary responsibility we have as people who make things.

UW Magazine: Do you think you’ve found your own perspective on this because you’ve had the opportunity to work on personal projects or has this way of thinking come from working for a big company like Reebok that has a much larger footprint and a lot more experience in this field?

Jones: I think it’s a combination of the two right? Working at whatever company whether it be Reebok or Guillermo Bravo, I’ve learned what I like and what I don’t like. I think as problem solvers, designers, people who are curious about shit, you try to solve for the things that you don’t agree with or things that you think can be improved.

UW Magazine: So it comes from a place of friction you think?

Jones: Yeah. You have to have a wall to bounce off of sometimes to realize where things can be improved instead of designing in vacuums.

UW Magazine: Or following what everyone else has done.

Jones: Right, right. I think you perceive information in a different way when you’re closer to different sources of creation or different models of thinking. Whether or not you can influence those systems is an entirely different thing, but you can at least reflect on it and try to do something. 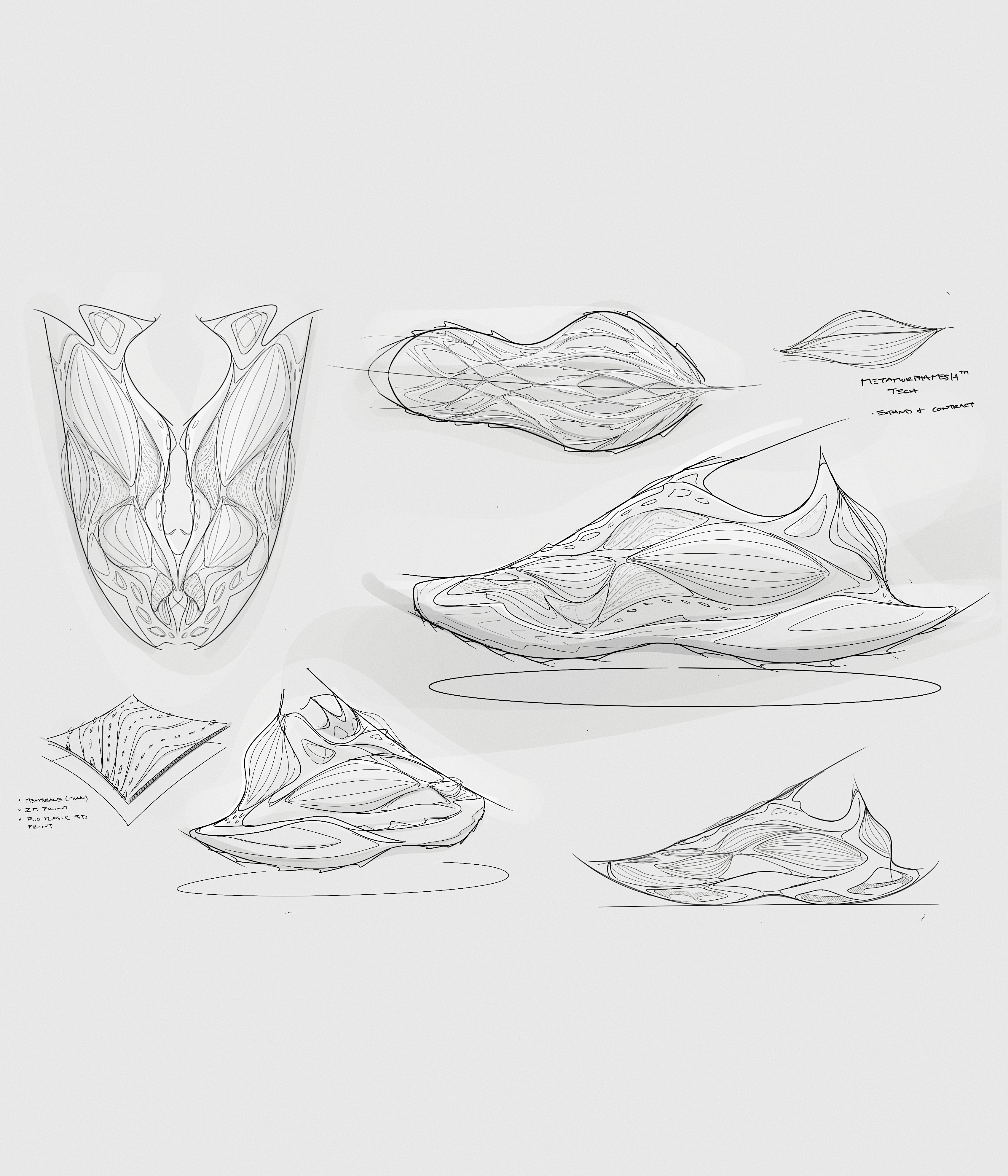 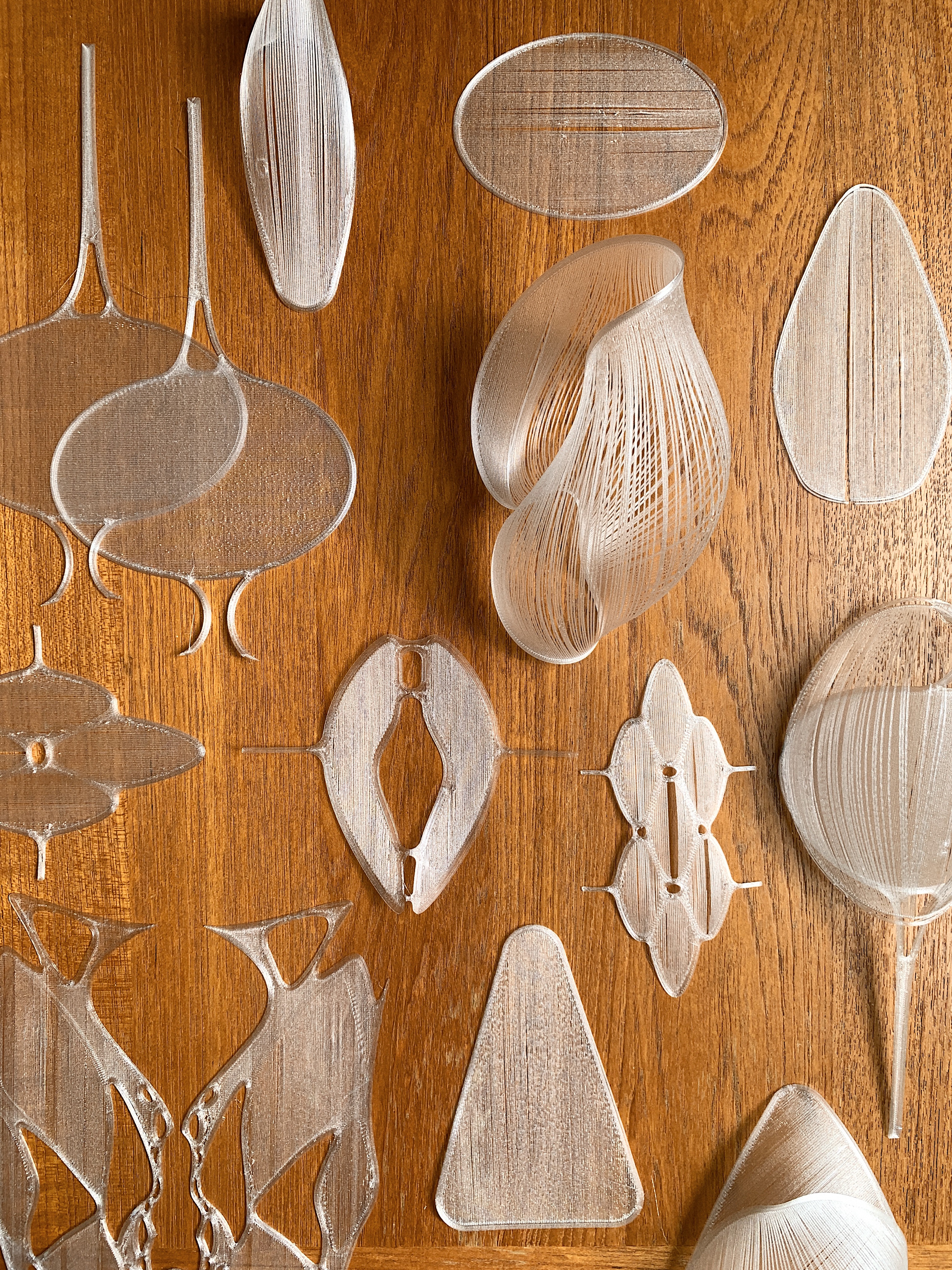 UW Magazine: At least you’re aware of it, and you’re in an environment where you’re around other people who think differently from yourself and are willing to engage in this kind of discussion.

Jones: Sometimes! (laughing) It’s nice when it happens, but in a lot of those places it’s becoming more and more of an initiative. And it’s hard because they have so many pre-existing business models that they’re invested in so it’s hard to allocate a meaningful amount of capital or mission to drive into that.

But to give credit to Reebok, they’ve definitely been pushing forward initiatives, and not just in a box to check off, but in ways that make them change their previous ways of thinking. It’s all coming together.

UW Magazine: Do you ever see your designs or your interests delve past what you’re currently pursuing?

Jones: I feel like footwear has never been the end goal to begin with. It’s one of those things that I happened upon as I investigated the broader context of design. But I feel like my career in general has been this meandering journey of following whatever interest I have at the moment. Every medium has something to offer in terms of processes to learn and so with footwear it’s been this journey of learning a new construction method, working with materials, etc. The underlying theme that connects everything together concept-wise goes back to the idea of understanding what a material does and how that’s married to whatever function that medium is ultimately built for. So who knows where that’s going to head next, but footwear is the medium that I’m exploring at the moment.

UW Magazine: Is that tied to where you’re finding inspiration or where you are in your own life?

Jones: I guess it’s both of those things right? Physical location, mental location. It’s pretty loose. I guess you can relate it to a meditation of everything. The process is kind of the same, and designing is the process of figuring out what you’re trying to do as an end goal, as well as figure out what happens along the way. We might have a north star that we work towards every day, but that process in the day-to-day is going to look different.

UW Magazine: Did you think a couple of years ago that you’d be here right now?

Jones: Probably not (laughing). I definitely didn’t think I’d be working for Reebok, getting paid to make shoes – that was not something that was on my radar. Being back in Seattle was not something on my radar either. It goes back to the approach of design or the approach of meditation where you are just kind of present with whatever you’re surrounded with and having this notion that things will fall into place as they should, when they should. So I never thought too hard about where exactly I would be at any given time. I focused, instead, on what was in front of me, whether that be product, design, or my situation. Being attune to whatever those things are usually has the answer in and of itself. And it harkens back to the paper folding stuff that I used to do. It was very much a meditation on a very small constraint of a medium, paper, a series of folds, and not necessarily having an outcome by any means in mind but trusting that you come to a place of resolution within that. And I think so much of how I work or how I’ve moved through life is resonating with that same process where it’s like I’m going to go into Reebok and do X, Y, Z. Vaguely I have some of those ideas of what I want to accomplish, but knowing that it’s a feeling more than anything. You listen and will know that it’ll come to a point when something is finished. Whether that be your time at that place is finished or a particular idea has come to some sort of resolution. Because there isn’t any clear end point a lot of the time, you really have to trust yourself.

UW Magazine: It’s funny that you bring that up because whenever I talk to someone pursuing something creative, especially when it comes to projects where there’s this starting point and this end point, a lot of people struggle with where to draw the end point. How do you put an end to an idea or to a career? It’s hard to find where the natural order of things has come to a resolution.

Jones: I’ve driven myself crazy before with those kinds of things. And it’s with everything! It’s with interpersonal relationships, projects, being in a physical location. At the end of the day, you follow your intuition and trust yourself in it.