When the UW’s Center for Digital Arts and Experimental Media (DXARTS) started four years ago, it set the standard for digital arts education and became the envy of other institutions around the world. By bringing artists, engineers and scholars together in a research-heavy, creative environment, DXARTS blurs the lines that traditionally separate creative arts disciplines from science and engineering. Led by UW Professors Richard Karpen and Shawn Brixey, DXARTS offers both B.F.A. and Ph.D. degrees in digital and experimental arts, with concentrations ranging from digital cinema to computer animation to sonic arts to robotics.

An undergraduate and doctoral program for artists conducting advanced exploration and creation of digital arts, including works in music, visual art, film, dance and video. Its Ph.D. program is the first of its kind in the world.

DXARTS is the brainchild of computer-music composer and musician Richard Karpen, who is the center’s director, and experimental-media artist Shawn Brixey, who is the associate director.

Founded in 2001, DXARTS was a longtime pet project of Karpen. Its seed money came from a special University initiatives fund, but the $1.4 million center also depends on public and private grants.

Located on the first two floors of a remodeled Raitt Hall, the oldest building on the Quad, DXARTS is the newest department within the College of Arts and Sciences. In the past, students dined in the Commons in Raitt Hall’s basement. Now young students feast on revolutionary art forms in the same space.

The program covers a wide range of computer-based arts practice, theory and research across multiple disciplines. Artists working in all genres learn various forms of science, mathematics and humanities. Students also apprentice under scholars in their fields.

New technology has always had an impact on the arts, whether it is the advent of the photograph, recorded music or oil-based paint in tubes. “I am committed to the exploration and development of new and experimental art forms,” says Brixey. “What we’re about,” adds Karpen, “is a synergy between artists and technologists working together to invent new ways to experiencing ourselves in the universe.”

Music Professor Richard Karpen was born in Brooklyn, N.Y., in 1957. A natural at music composition and mathematics, he was fascinated from an early age by the parallels between composing music and computer science. Both involve designing complex webs of interdependent streams of information that work together to create a unified whole. 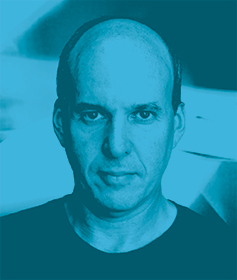 “But music doesn’t need performers anymore,” Karpen says, “and that has created interesting aesthetic and philosophical problems for artists to solve.” As a student, he apprenticed at the Paris Conservatory of Music and in New York with Gheorghe Costinescu, Charles Dodge and Morton Subotnick before attaining a Ph.D. in music composition at Stanford.

Since then, he has composed many works for computer, including sound design and dance works. Along with numerous concert and radio performances, his works have been used by dance companies such as the Royal Danish Ballet and the Guandong Dance Company of China. Karpen’s compositions have been recorded on CD by Le Chant du Monde/Cultures Electroniques, Wergo, Centaur, Neuma, and DIFFUSION i MeDIA.

The recipient of many awards, grants and fellowships, including a Fulbright Scholarship to Italy, Karpen joined the music school in 1989 and became the director of DXARTS in 2001.

“Anterior View of an Interior with Reclining Trombonist: The Conservation of Energy” 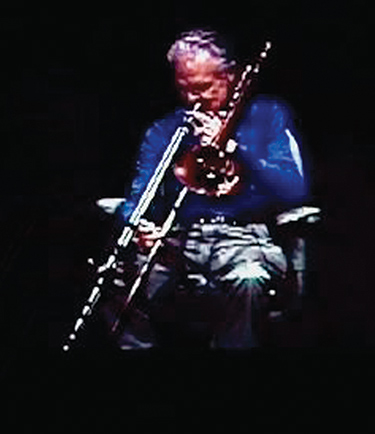 Karpen likens music notation to a theatrical script. As an actor interprets the words of Shakespeare, a musician interprets the score and embodies the music while adding his or her own experience to the mix. With computer music, Karpen can take the performer out of the performance. For this work, he wrote a computer program that track the movement of the slide of a trombone. Some sounds are created by playing the trombone; other sounds are prerecorded and played through the movement of the slide. Karpen dedicated this work to UW faculty member and trombonist Stuart Dempster, who performed this piece for its debut in 2003. 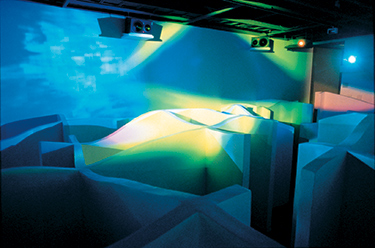 This is a multimedia, computer-generated environment created by a group of students and artists working in the Karpen-founded Center for Advanced Research Technology in the Arts and Humanities and displayed for four months at the Henry Art Gallery on campus. In it, computer-controlled projected light, sound and video – both moving and still – are splayed throughout a form of large, undulating white walls built to create a grid of passages and dead-ends. This “new habitat” is essentially a room-size, interactive, multimedia maze, designed to allow viewers to walk through, explore and experience.

Growing up amid rural landscapes in Missouri with parents who worked as television producers, Shawn Brixey experienced both an organic environment and the world of high technology. 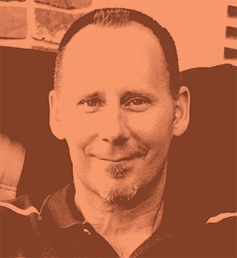 Born in 1961, he possessed extraordinary drafting skills as a child. Watching the wonders of television production, he was fascinated by systems that could encode and decode a person’s presence. He understood that to make great art, he would have to “transcend our biology, our space and time in a way no artist had ever attempted – and synthesize art and science,” Brixey says, “so that I might be the first to map out the way to transcend the lost hope that a drawing or an object points at – but will always fail to become – which is the thing itself.”

After earning a B.F.A. from the Kansas City Art Institute, he got his master’s degree from MIT’s Media Laboratory and Center for Advanced Visual Study. He came to the UW in 1994, left for Cal-Berkeley and then returned to co-found DXARTS.

His works include “Alchymeia” for the 1998 Winter Olympics Ice Art Festival in Karuizawa, Japan, “Chimera Obscura” for the Henry Art Gallery and “Altamira” for the “Hyper-runt” exhibition at Philadelphia’s National Projects Building. 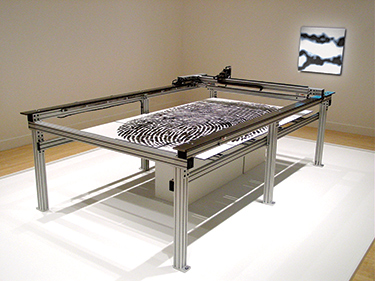 “Chimera Obscura,” a collaborative project with artist Richard Reinhart for the Henry Art Gallery’s 2004 “Gene(sis): Contemporary Art Explores Human Genomics” exhibition, is a net-based telerobotic maze-style game, based on a human thumbprint, that is accessed and navigated on the Internet. To play the game, visitors “travel” through the maze and deposit a virtual trail of media memes (audio, video, text and graphics) for others to read, duplicate or delete in the search for a unique sequence that will decode the maze. To date, “Chimera Obscura” has not been solved or hacked. 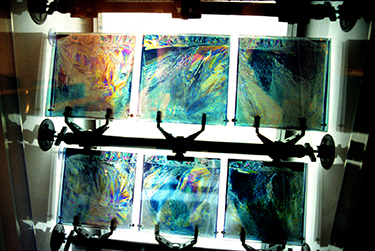 Created for the 2998 Winter Olympics Ice Art Festival in Kuruizawa, Japan (held in conjunction with the Nagano games), Brixey’s “Alchymeia” literally transformed one state of matter to another. The piece was a genetically engineered, on-line ice installation that used hormones from the urine of Olympic athletes and ultra-pure, ultra-cold water to stimulate the growth of individual ice crystals. The result is a work of art grown from a preordained genetic blueprint. (At right is a wall of images from individual ice crystals, and below is a detail of one crystal.)

To understand just how out-there the concept behind Shawn Brixey’s “Altamira” is, it helps to first know it was created for an exclusive 2004 exhibition called “Hyper-runt” in Philadelphia. Artists working in science and new technologies were given full rein to create and exhibit their cast-off projects, those far-reaching artworks nobody wanted (read: understands) and that are therefore unable to find a home in traditional museums and gallleries. “Altamira,” a neuro-prosthetic, uses radio waves recorded from pulsars (collapsed stars) in outer space to create a code that stimulates viewers’ retinas. That stimulation, in turn, triggers phosphenes (those patterns of colored light we see when we squeeze our eyes shut), which create a “cosmologically scaled experimental work of art in the ‘mind’s eye.'” (Imagine, perhaps, seeing dazzling constellation patterns in your mind.) As yet unrealized, “Altamira” cannot currently be viewed by the public pending a safety review by the FDA.

Ali Basye is a Seattle-based freelance writer and editor.