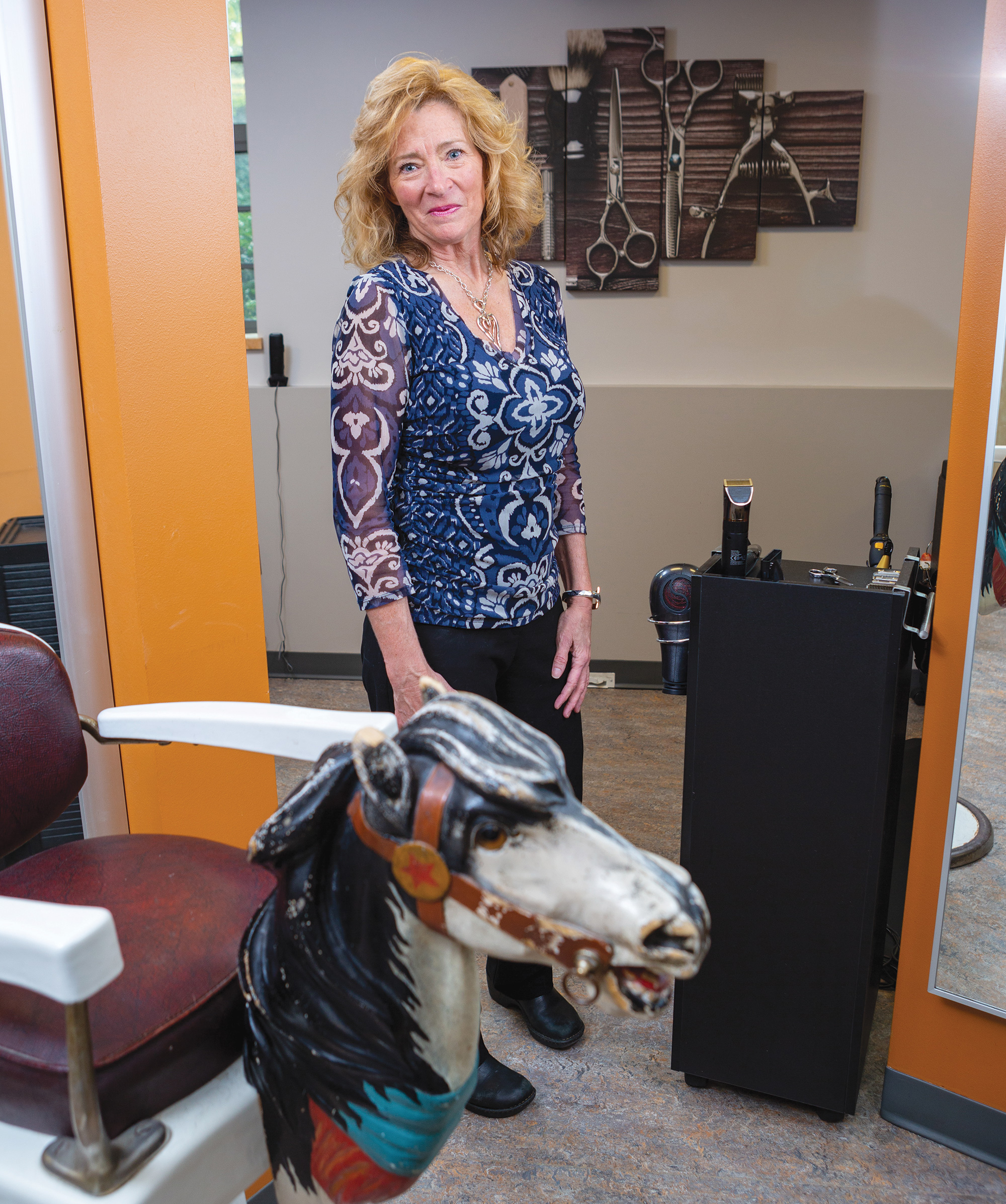 The HUB has been home to a hair stylist since 1952. Now, salon operator Jane Snell hangs up her shears and closes the Scissor’s Edge.

Year after year, from the time she bought The Scissor’s Edge salon and barbershop in 1984, Jane Snell daydreamed about taking time to enjoy the cherry blossoms each spring. As she thought about it while cutting and dyeing hair, she built a particular scene in her mind.

“I’ve always wanted to go out to the cherry blossoms with a bottle of wine and sit on the bench and just enjoy the beauty after work and, like, put the wine in my coffee mug,” Snell says.

Being a go-getter, though, she never could justify putting down the shears and venturing over. Too busy, too busy, and the decades slipped by—until this spring. She’s closing her Husky Union Building landmark on June 10 after 38 years and has finally checked out the internationally renowned arboreal scene. She didn’t bring the wine, but everything else was as she’d hoped.

“I should have done it, and I thought about it, but then I would have had to leave campus [to get the wine] and come back,” Snell says. “But I thought, you know what, just seeing the cherry blossoms is better than nothing.”

“She does such a fabulous job cutting hair, and nobody’s ever colored it like she has. She’s so good at that, and friendly and fun.”

The Scissor’s Edge opened in the HUB in 1949, making it one of the campus’ oldest continuously operating institutions. But time has changed the traffic patterns, Snell says, and COVID-19 only accelerated a long-term decline in potential customers.

When she took over the business, 19,000 people passed through the HUB each day. And four times a year, students would line up outside her door to copy lecture notes, a quarterly event that helped fill her appointment book. “I have to say it was the best advertising when we had the lecture notes, because they’re sitting out there for three hours and they would see a lot of people come in ratty and leave beautiful,” Snell says.

The internet wiped out that customer source, and the proliferation of residence halls with cafeterias and restaurants, coffee shops and new meeting technologies were already diminishing traffic in the HUB, Snell says. Now, foot traffic has slowly recovered since campus returned to in-person classes, but some of her decades-long customers were hesitant to come back. And she’s got a lot of those.

Jane Lybecker, ’96, a now-retired administrator who managed the Materials Science and Engineering Department, first ventured into The Scissor’s Edge in the early ’90s and never stopped coming. “I went to her because it was convenient on campus,” Lybecker says. “Somebody recommended her and I went. She does such a fabulous job cutting hair, and nobody’s ever colored it like she has. She’s so good at that, and friendly and fun.”

So much fun the two decided to take a vacation together to Spain and are now close friends. Their senses of humor mesh. “When I decided to get my hair cut shorter, and we were talking about styles, she says, ‘You want a little bit of sass?’ ” Lybecker recalls. “So she left it a little bit long in the back. That was my sass.”

Snell’s not sure what she’ll do next. She thought she’d run The Scissor’s Edge until retirement, but she is only 58. She opened a studio in her home during the height of COVID and could pivot there. And she has an ailing mother she’d like to spend time with too. “I might just take three months off after I do this, and then we’ll see what happens,” Snell says.