“We’re in the ideal spot for owls,” says wildlife photographer Paul Bannick, who took us on an urban tour of the nocturnal predator. 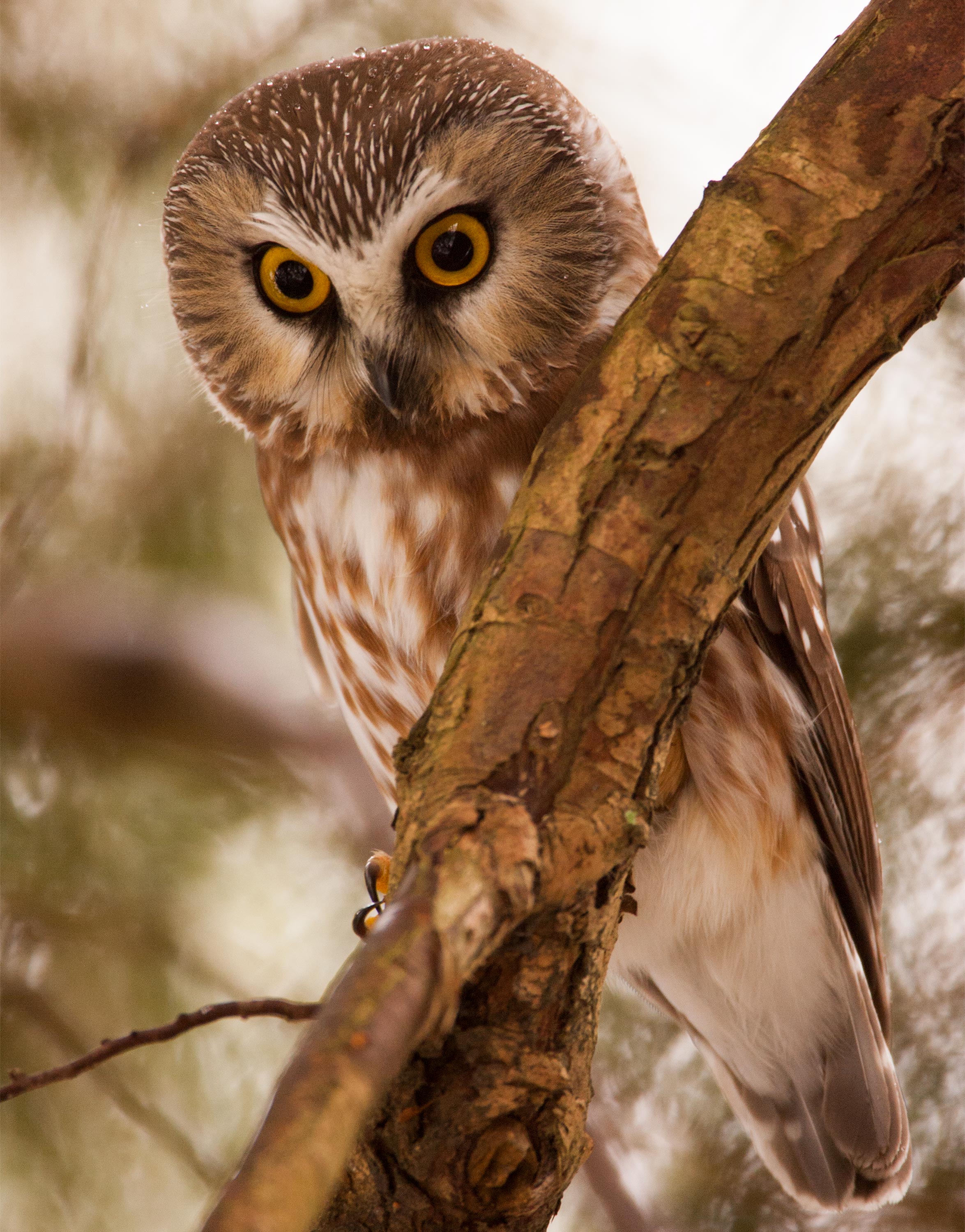 In a good year, Washington is home to 15 different species of owls—more than any other state in the U.S. That's because we're in an ecological sweet spot: an ocean out west, a dry interior out east, and a mountain range in between that carves out sub-climates on top of peaks and inside valleys. More climates, more species.

Nobody knows North American owls like Paul Bannick, ’86, who traverses the continent to track them down. His images send us soaring with great gray owls, eying prey with northern hawk owls and nesting in old-growth trees with spotted owls.

The first place Bannick ever photographed an owl was Discovery Park, the 534-acre wilderness tucked inside Seattle’s Magnolia neighborhood. Since then he’s found up to six different species in the park.

This summer, he took UW Magazine on a trip through these trails, starting in the south parking lot, and we weren’t disappointed.

Click below to listen to audio from our tour. 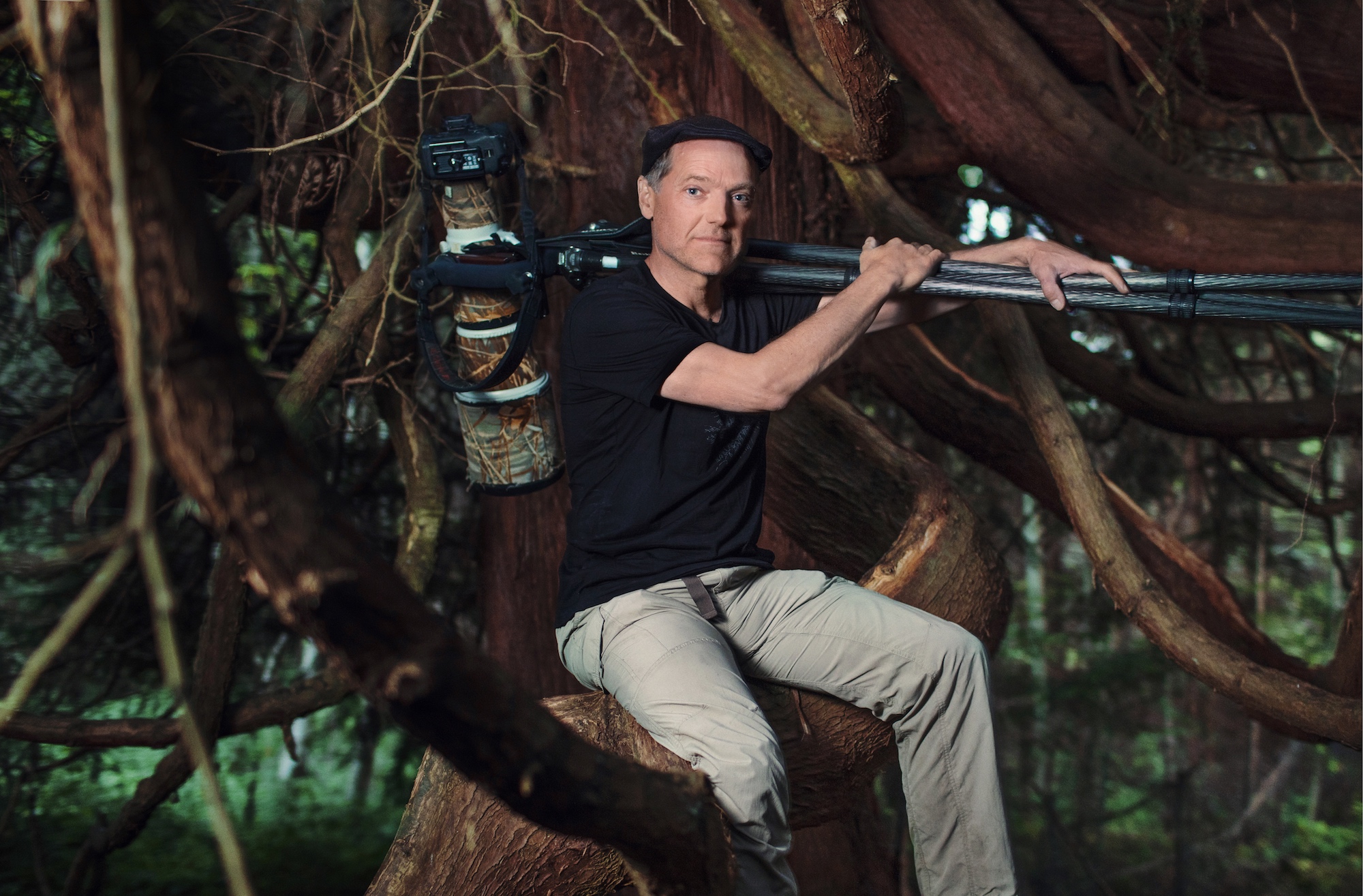 What makes Discovery Park special, says Bannick, is that it’s a combination of meadow and forest, with both saltwater and freshwater. That means a diverse range of species can find food and shelter. The park used to be an Army base called Fort Lawton, where Bannick’s father was decommissioned from World War II. The Army gave the land to the city in 1972, and the park opened in 1973. 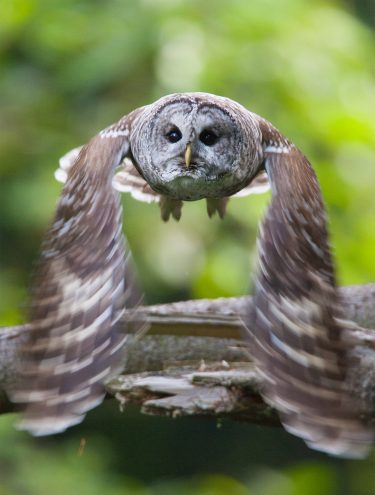 Generally speaking, owls are animals of low-light. “You’re going to find the most owls just after the sun sets, or just before the sun has risen,” Bannick says. Many are nocturnal (active at night), others are crepuscular (active at the beginning and end of the day), and some, like the northern hawk owl and the northern pygmy owl, are active during the day. Listen for other birds

Not for a chorus of chirps, but for a cacophony of squawks. Birds warn their kin about predators, and the owl is a major-league predator. An isolated distress call is a good start, but the more birds the better. “Multiple birds doing an alarm call means predator,” Bannick says. “There might be a 10 percent chance it’s an owl, but that’s a good chance when you’re looking for an owl—because they’re really hard to find.” (Don’t worry: Discovery Park is more reliable than most places, given the extreme biodiversity.) A barred owl soars through Discovery Park. Note how long its legs are when outstretched. (Photo: Paul Bannick)

“I have spent several hundred dollars, and several days, and struck out. No owls, nothing,” Bannick says, describing some of his more hazardous nature hikes. “I’ve spent the same amount and money and saw an owl for a moment, and then it’s gone, never to be seen again. And I have spent that same amount of money and shot glorious shots every day for seven days straight.”

“No matter how quiet you are, an owl sees you. An owl is watching you.” 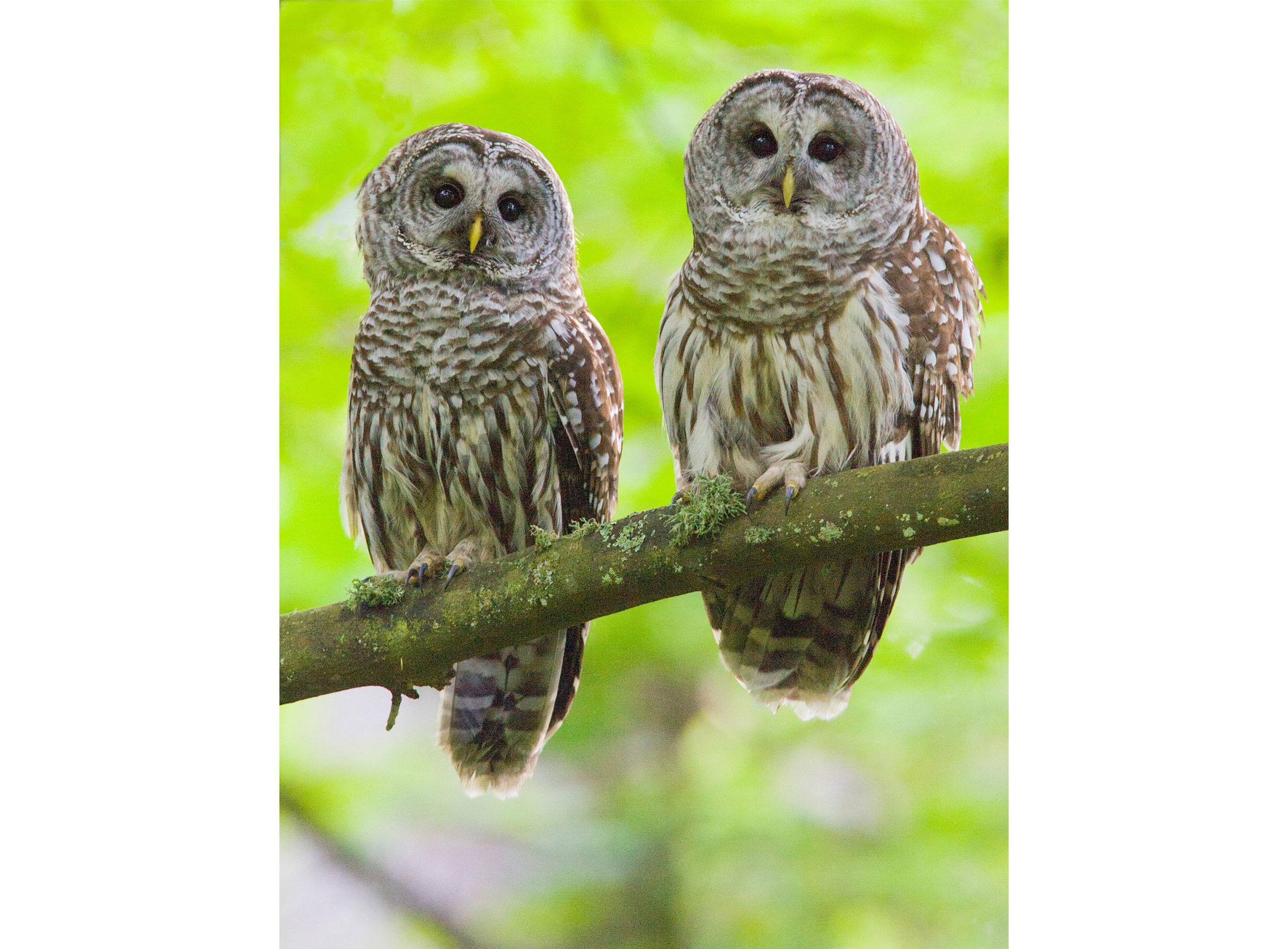 A pair of barred owls watch photographer Paul Bannick as he takes their picture in Seattle.

An owl for every environment

Bannick camps, hikes and kayaks whenever he can. And wherever he’s at, there’s an owl. “Every place I go, I am serenaded at night as I’m cooking dinner or setting up a tent by a different kind of owl,” he says. “Whether it be desert, forest, shrub-steppe, grassland, arctic tundra—there’s an owl for each one and they’re different. They have a different call and they have different needs.”

The burrowing owl, for example, does better where the grass is grazed. The short-eared owl does well in tall grass. Some owls need a forest to be managed, while others need it to be left alone. “The story for all of them is not, ‘Lock it all up and protect it.'” 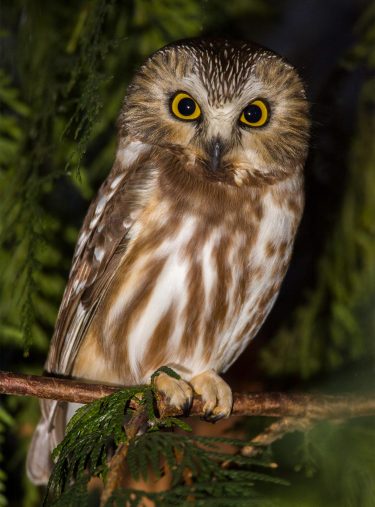 Everybody looks better with a little lighting, including this saw whet owl in Seattle’s Discovery Park. (Photo: Paul Bannick)

Got time to kill? Post up and wait for an owl to arrive. Look for trees that provide a stable perch and some sort of shelter. If you know the habitat, you improve your chances. A great gray owl, for example, perches low near a meadow. “What I want to do is arrive before the owl arrives,” says Bannick, “so it goes about its normal behavior without worrying about me.” Avoid seeking them out in crowded parks, during mating season (between May and July), or if the species is endangered or threatened. A barred owl stays warm by snuggling up in a tree in a snowy Discovery Park. (Photo: Paul Bannick)

Every owl has its own call

“Some have hoots, some have whistles, some have toots,” says Bannick. If you’re inspired by Bannick’s barred owl hoot in the audio story, think twice before trying it yourself. Only one owl in his last book was hooted in. “All the others are from reading the land,” he says.

Where to see every species

You can theoretically spot every North American owl by visiting only three U.S. states. Start in Washington, stop in Arizona, then head to Texas to round out the list. Fair warning: You have to get lucky to see a Snowy Owl in Washington.

“Owls are carnivores and predators, and there are so many things beneath them that have to occur for them to survive,” Bannick says. That’s why they’re considered an indicator species, which means they can tell you if an area has a functioning ecosystem.

“The premise of Discovery Park is that it’s a place of solitude.” Paul Bannick looks out at the setting sun in Seattle’s Discovery Park, which was once an Army base where his father was decommissioned from World War II. (Photo: Quinn Russell Brown)

Watch: A barred owl in Discovery Park gets dive-bombed by robins, a technique that annoys—but doesn’t harm—the stoic predator. “There are two theories for this,” Bannick explains. “One: They’re trying to drive the owl off. Two: They’re teaching the young robins that this is something to avoid or be aware of. I have never seen birds find an owl and fail to mob it.”

Other birds hate owls. Not just that they’re a predator, it’s that they’re a ruthless predator. Here’s a graphic example: An owl that’s well-fed will eat only the brain of its prey, and then store the rest for later.

Native to the East, the barred owl is an invasive species that displaces native owls. “But, on the other hand, it’s a gateway owl for a lot of people,” Bannick says. “It’s an owl that people can see in a local park and fall in love with, and become curious about the environment. So in that sense, I kind of like them.” 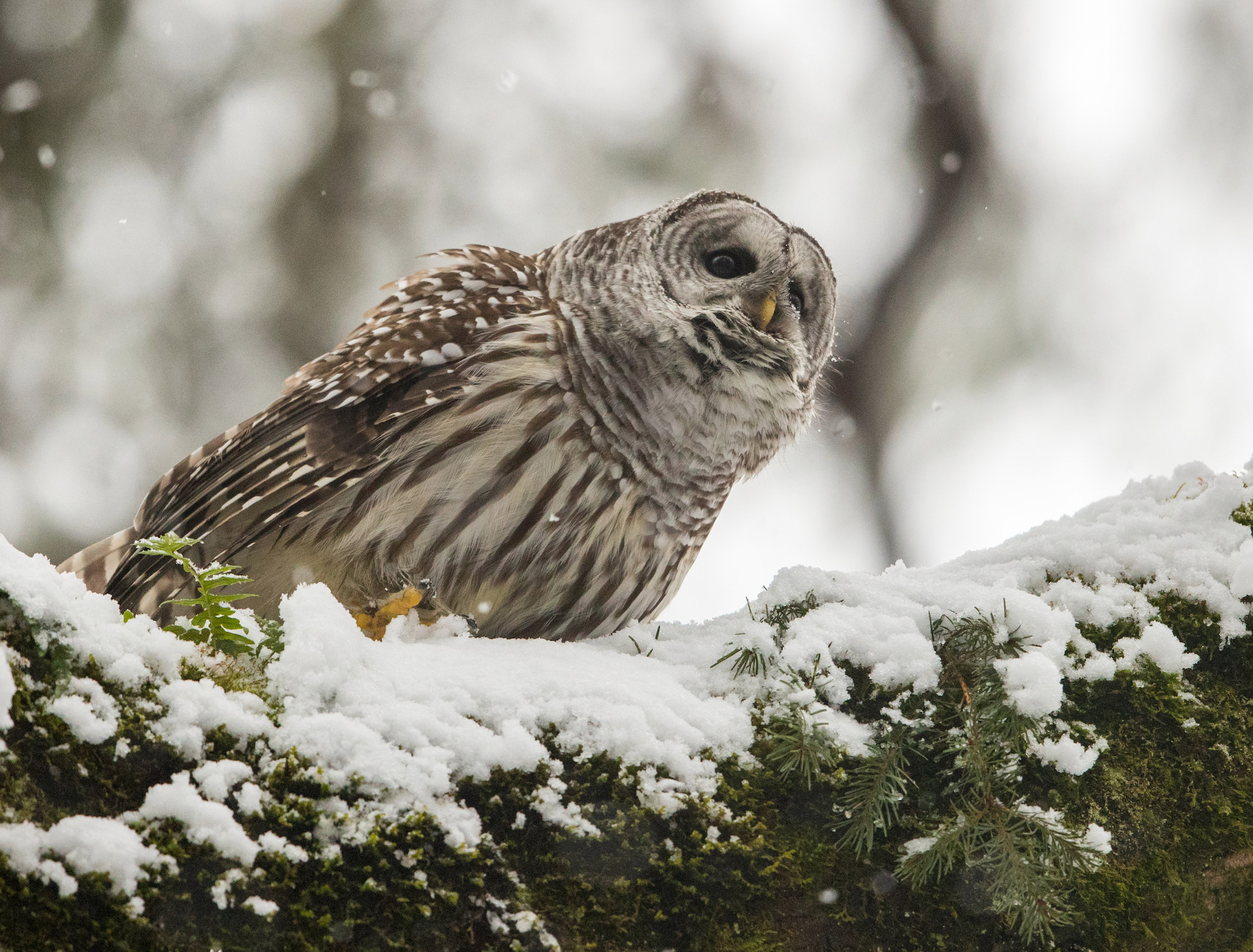 A barred owl lets out a hoot, perhaps looking for a mate or simply making itself known. (Photo: Paul Bannick)

As Seattle’s population booms, Bannick hopes the city will preserve the few slices of wildlife that remain. The untouched lands of Discovery Park are often targeted for development—whether it be for a golf course, for new housing, or most recently for a music school. “We have to remember why Discovery Park was created,” Bannick says. “Owls are only one small part of what this park protects.” 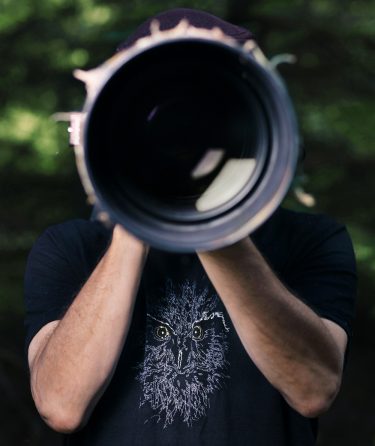 Paul Bannick stands behind the enormous zoom lens that he used to capture these photos. (Photo: Quinn Russell Brown)

Head over to Bannick’s website to see more of his work. Visit the UW Book Store in person or online to find his latest book, “Owl: A Year in the Lives of North American Owls,” as well as his previous book, “The Owl And The Woodpecker: Encounters With North America’s Most Iconic Birds.”