Shooting for the stars

For 40 years, a group of Seattle-area women has helped UW students strive to be the best in science and engineering.

Some groundfish are so rare they might soon vanish from the ecosystem. Others are so common they may be overwhelming the sea floor. “But the thing is, around here we think a lot about salmon and killer whales,” says Elizabeth Ng, a graduate student in marine ecology and conservation. “We need to also understand these other really dynamic fish and sharks.”

Ng’s mission is to figure out how populations of Puget Sound groundfish like rockfish, sole, halibut and spiny dogfish have changed over the years. The information will help fishery managers make scientifically informed decisions to ensure the sustainability of certain species. “But it’s hard work,” she says. “Fish move and are difficult to track.”

Ng fell in love with field ecology as an undergraduate in California. After graduation, the New Jersey native landed an internship at the U.S. Fish and Wildlife Service and got hooked on fish. Earning her master’s at the University of Idaho allowed her to focus on fish and wildlife with a serving of statistics on the side—excellent background for a future UW Ph.D. student in the Quantitative Ecology and Resource Management program.

By looking at how species interact over time, ecologists can build a fuller picture and know whether certain species are thriving or at risk, Ng says. “Right now there are holes in the data, and by using data collected by UW fisheries classes decades ago, I’m trying to fill in some of those holes.”

Ng can pursue this work in Puget Sound thanks to financial support from 155 passionate and forward-thinking Seattle-area women who are tackling the urgent need for more scientists and engineers. As members of the Achievement Rewards for College Scientists (ARCS) Foundation, they currently fund 120 graduate students in 36 departments at the UW, as well as 35 at Washington State University. 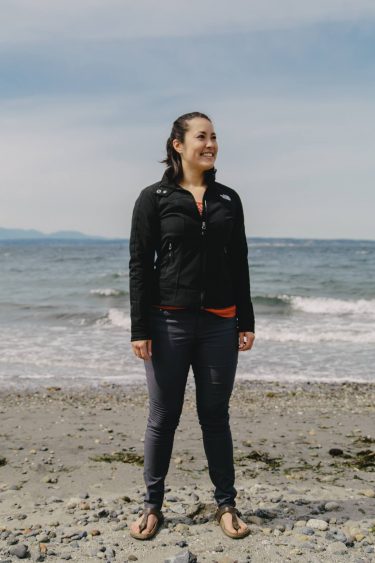 ARCS Foundation offers three-year fellowships that provide students with $7,500 the first year and $5,000 for each of the next two. This funding is often the very thing that tips a talented student’s decision to come to the UW. “It was one of the factors that helped me pick,” Ng says. “I use the money now to defray living costs—rent here is five times what it was in Idaho—and to go to conferences where I can present my work.”

These awards come without restriction so students can spend the money where needed. Often they buy computers or equipment, pay moving expenses, cover rent or child care, or travel for research. At the UW, the Graduate School manages the selection of students, with help from department leaders for the eligible programs.

ARCS Foundation started in Los Angeles at the height of the Cold War in 1958 by a small group of philanthropically minded women concerned about the future. Russia had just launched the Sputnik satellite into orbit around Earth, and America was afraid of falling even further behind in science. Already donors and fundraisers for education, these women focused their efforts on providing scholarships for American graduate students in engineering and science.

In 1978, about 30 influential and like-minded women in Seattle formed their own ARCS Foundation chapter to support graduate students at the UW. The founding members were already forces in the region, among them UW alumnae and community leaders with ties to Longacres racetrack, The Seattle Times, PACCAR, the founding families of Seattle and Tacoma, and the region’s leaders in business and development.

“It meant so much that ARCS chose me,” she says. “It was a vote of confidence that was really key for me to move forward.”

Armed with impressive records of volunteering and fundraising for art museums, the Seattle Opera, children’s theater and hospitals, they laid the groundwork for what has become one of the most successful ARCS chapters in the country. (There are 15 nationwide.) As a nonprofit, the Seattle Chapter ARCS Foundation relies on individual and corporate donors, and has awarded more than $17 million in fellowships to more than 1,200 students.

“This year marks the 40th anniversary of the Seattle Chapter ARCS Foundation,” says Amy Addison Rudolf, ’80, the current chapter president. “It is a proud and thrilling moment in our history. Our mission of advancing science in America resonates with our current membership as strongly today as it did with our formidable founding members.”

Micki Flowers, ’73, a former broadcast journalist and Seattle philanthropist, was invited to an ARCS Foundation meeting two decades ago by the late Dottie Simpson, ’82, a city luminary who in her 50s enrolled at the UW to earn an MBA. Simpson, who died this spring, was a long-standing ARCS member, adventurer and well-known volunteer (see page 59).

“ARCS has brought me great friends and given me a place to connect with people with whom I have so much in common,” Flowers says. The foundation also allows Flowers to support her alma mater. The group can use the ARCS award as a carrot to get certain students, she says. “In that way, we are able to help the University, too.”

“ARCS has a tremendous impact on the UW’s graduate students,” says Rebecca Aanerud, interim dean of the UW Graduate School. “Not only does the generous financial support give them freedom to pursue their research, but the moral support and personal interest from the ARCS sponsors is invaluable.”

“Without my ARCS funding, I wouldn’t have been able to come here at all,” says Gabriella Tosado, a chemical engineering student who used some of her first-year funding to subsidize her relocation from Miami. Once she had started her studies, she realized that the ARCS award on her resume strengthened her candidacy for a rare National Science Foundation fellowship in clean energy research. “It meant so much that ARCS chose me,” she says. “It was a vote of confidence that was really key for me to move forward.”

The money Alec Gibson receives from ARCS has allowed him to live on Capitol Hill near the UW Medicine Harborview Medical Center building where he studies serotonin and the role it plays in addiction. Gibson is working on a medical degree as well as a doctorate. His partner, Ted Gobillot, another ARCS fellow and M.D.-Ph.D. student, researches the Zika virus in the Overbaugh lab at Fred Hutchinson Cancer Research Center. 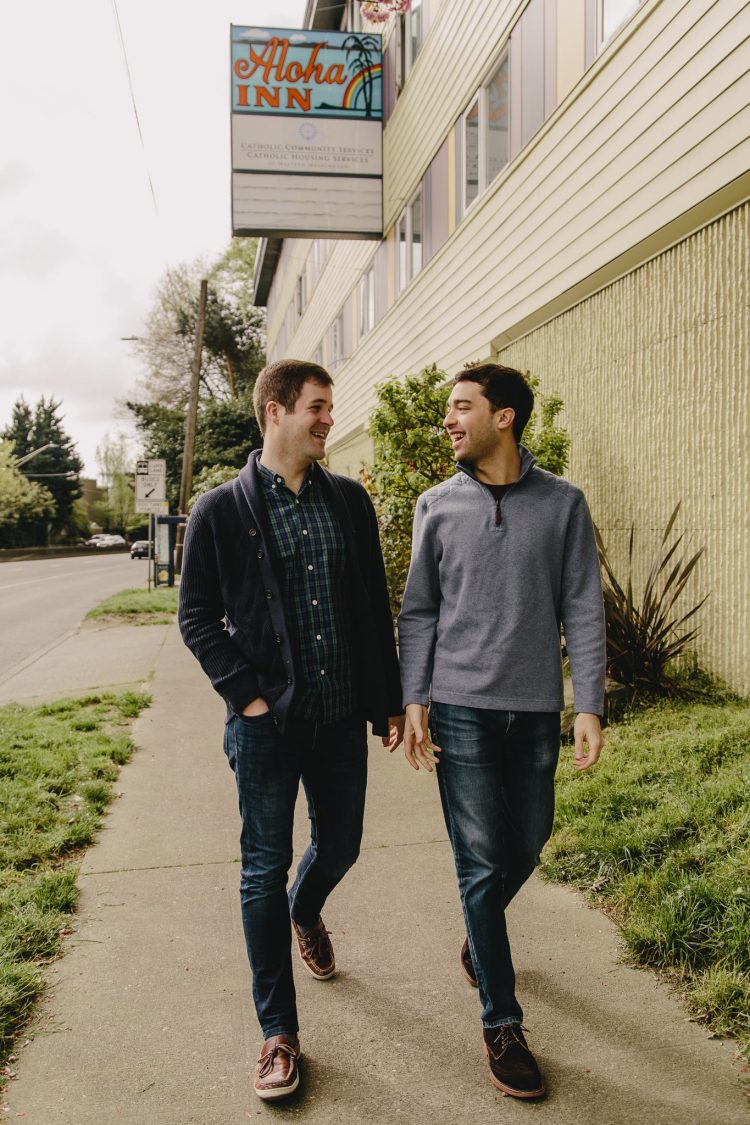 When they’re not attending medical school or furthering their research into human health issues, UW ARCS scholars Alec Gibson, left, and Ted Gobillot provide medical care to underserved communities. Their ARCS funding helped them have time last year to lead a free clinic at the Aloha Inn, which provides transitional housing for the homeless.

“We’re often going in late at night and on weekends to check on our experiments,” Gibson says. “This lets us avoid what can be up to an hour of commuting a day.” It also means Gibson doesn’t have to take an extra job to cover travel home to South Carolina during the holidays. “Moving to the West Coast was really difficult,” he says. “And this is a long program. Being able to fly home to see my family is keeping me from burning out.”

Free time is a rarity for Gibson and Gobillot, but what extra time they do have is given to patients with the fewest resources. Last year, the pair led a free clinic at the Aloha Inn, a former Aurora Avenue motel in Seattle that was converted to transitional housing for homeless and low-income people. This year, they’re spreading their efforts among several clinics.

Gibson’s ARCS funding comes from a McCaw family endowment. Understanding that the McCaws have a long history in the region deepens his connection to Seattle. Having that money and recognition gave him the confidence to apply for the National Institutes of Health grant that now covers much of his research and tuition. “Knowing there are people out there willing to support and fund the work that I’m doing was a factor in my confidence level,” Gibson says.

Gobillot’s support comes from Winky and Peter Hussey, who, like a number of ARCS donors, take a direct interest in the scholars they support. “We feel so much more connected, thanks to them,” Gibson says. “They have been generous with their time and encouragement to both of us.”

One of the best things about being an ARCS donor is meeting the scholars and hearing about their work, Flowers says. The foundation holds regular events in which students with ARCS funding can share the details of their research and meet the donors. And many ARCS donors go the extra step of offering friendship and mentorship to the students they fund. “ARCS is the place for energetic and focused women who have a passion for science and want to be in the know,” Flowers says. “And to be able to connect with these talented young scientists, well, that’s just amazing.”