UW Alumni Tours takes travelers to destinations all over the world. But it’s the journeys inward that reveal the heart of the traveler.

As the official travel program of the UW Alumni Association, UW Alumni Tours gives alumni and friends the opportunity to grab their passports and suitcases and see the world. But it’s much more than just sightseeing. Local experts or occasionally UW faculty are on every trip to provide educational lectures.

Charlie Blackman didn’t want to go to Cambodia. Full of misgivings about the country’s troubled history, he balked when his wife Kathy suggested they tack a short visit onto to their 2011 trip to Vietnam with UW Alumni Tours. Swayed by her zeal to see Angkor Wat (“How can you not go see one of the Seven Wonders of the World when you’re so close?”), he finally agreed.

Four years later, and the 1979 UW School of Law graduate is hooked. Now retired from his practice, he visits Cambodia annually, spending several weeks each time as a volunteer teaching English. His students run the gamut: teenage residents of a Phnom Penh orphanage, rambunctious youngsters in a rural village school, and garment workers determined to build better lives for themselves.

What keeps him coming back? “There’s something about the people,” he says. “They value kindness and compassion. There’s a graciousness about them, a kindness that’s just exceptional.” That impression, formed after just four days with the UW trip, was “reinforced a hundredfold” after spending more time in the country.

Less than a year after his visit to Angkor Wat, Blackman found himself in Phnom Penh working in an orphanage alongside a Cambodian teacher. In a nearby classroom his grown son, Michael, was assisting in another English class. The orphanage connection came about through Blackman’s tour guide, Chandararith “Rith” Ek, whom the family now counts as a friend. “I have the UW Alumni Association to thank for a wonderful trip teaching English with my son,” says Blackman.

The next year, he returned on his own to the orphanage, where students cheered the reappearance of “Teacher Charlie.” He also traveled to a nearby village where subsistence farmers work the land behind Brahma cows. His mission: Assist with afternoon English classes in a new two-room school. In Cambodia, he discovered, English proficiency is “a ticket up and out.” As a native speaker, he was a star attraction. His students were consistent, eager and very vocal—even after full days of public school and field work.

Back in Phnom Penh, he also helped out in a class for garment workers. Earning less than $100 a month working long hours in tough conditions, the students (mostly young adults) were nonetheless excited and energized for class each evening. “That kind of enthusiasm despite the hardships of their lives—I’m almost in awe,” says Blackman. “If I can help these people, I’ll help them.”

His students’ fervor and open-heartedness has also rubbed off in an unexpected way: He no longer mocks “kitschy” or sentimental figures like cute kittens, dewy flowers or winsome Santas. (He often travels to Cambodia in December.) What holds him back? He knows how much his students love those images, even if they don’t celebrate the associated holidays. “My experience in Cambodia makes me less cynical,” says Blackman. “It makes me more grateful for the life I have.”

Pictured at top: Detail from a mural in the Royal Palace in Phnom Penh. The palace, which was built in 1866, is a popular tourist attractio for its architecture and art. It boasts the biggest mural frescoes in South East Asia. 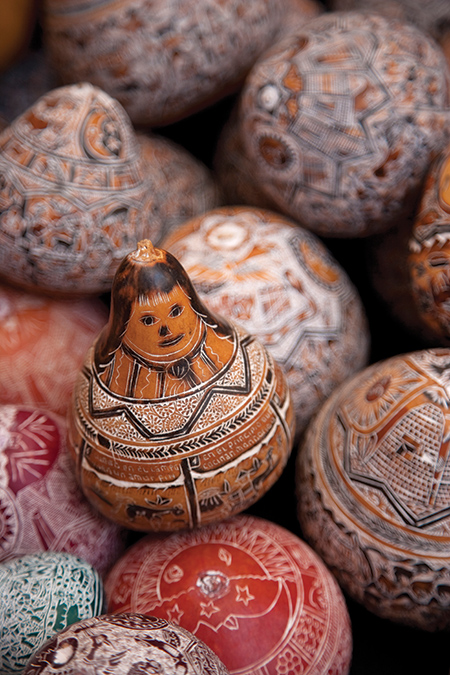 Peru has a rich tradition of gourd carving, and children learn the skill at a very young age. Carved and painted gourds become rattles, baskets, bowls and toys like those pictured here.

In her 25 years as a flight attendant, Tina McCollum had traveled the world. But she had never visited Peru until her husband, Rodger, ’78, gave her a birthday surprise in 2009: a spot on UW Alumni Tours’ 10-day exploration of the country. Her bucket-list trip has since opened the doors to a steady flow of visitors between Peru and her hometown of Snoqualmie, Washington.

Passionate about creating global citizens, McCollum had already established a sister city relationship between Snoqualmie and Gangjin, Korea. On the UW Peru tour, she became fast friends with guide Ernesto Riedner, who had visited the U.S. as an exchange student some 35 years ago. United in their enthusiasm for making the world a little smaller, McCollum and Riedner kept in touch.

One day in 2011, Riedner floated the idea in an email: Why not create a sister city relationship between Snoqualmie and a counterpart in Peru? Getting the nod from McCollum, he began searching for suitable candidates, canvassing the greater Lima area for a city roughly the same size as Snoqualmie (pop. 40,000), and with a similarly rural vibe. He hit the jackpot with Chaclacayo, a charming, sunny city and favorite weekend getaway for nearby urban residents.

Just six weeks after the cities’ friendship had officially begun, two Peruvian students were on their way to Snoqualmie. Since then, roughly 30 Chaclacayo residents, mostly teens, have made the trek. The biggest culture shock that awaits? “It’s the lack of public transportation,” says Jenny Foster, the AP Spanish teacher at Mount Si High School and a surrogate mother to the exchange students. Accustomed to taking buses or walking wherever they need to go, the Peruvian teens are shocked to learn they can’t just stroll to the mall.

The Snoqualmie Valley’s lush vegetation and abundant rainfall also provoke dramatic reactions from the visitors. The mountains surrounding Chaclacayo are a veritable lunarscape where no vegetation grows, and most of the Peruvians from that region have never experienced snow, let alone rain like in the Pacific Northwest. When Ernesto’s daughter first arrived in Snoqualmie, “She stood out in the rain and just let it pour over her,” remembers McCollum. About 35 Snoqualmie residents have so far made the reverse trip to Chaclacayo. On each journey, McCollum and Foster watch proudly as local teens grow into young global citizens, navigating an unfamiliar culture and grappling with a second language. “A trip to Peru is a real eye-opener,” says Foster. “Visiting orphanages and rural schools really expands their world from the Snoqualmie Valley bubble.”

The sister city program is reaching beyond the schools, too. Last year, with McCollum acting as courier, the Snoqualmie Fire Department donated a cache of used coats, helmets and other gear to Chaclacayo’s firefighter brigade. Peruvian firefighters, all of whom are volunteers, are required to buy their own equipment, explains McCollum. New gear goes for $1,300—a difficult stretch for many volunteers, who are thrilled to receive the Snoqualmie donations.

With the burgeoning success of the sister city program, McCollum finds herself fielding inquiries from mayors and municipalities around the world, all hoping to join the Snoqualmie family. Busy building out her infrastructure and recruiting board members, she’s laying the groundwork for new alliances. “Our exchange program is going strong,” she says, “all because of my tour to Peru in 2009 with the UW, and the friendship of my tour director, Ernesto Riedner.” 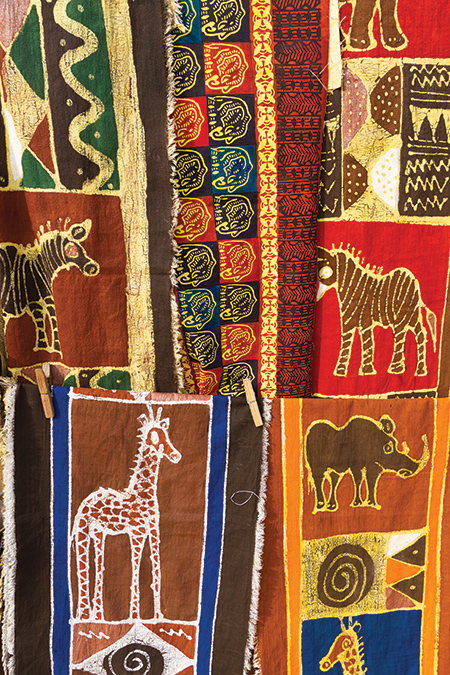 Colorful textiles hanging at a craft village in Zambia feature images of giraffes and zebras, wildlife that tourists to the country are likely to see. The textiles are hand painted by local artists.

The tour was titled “Africa’s Wildlife,” and it delivered. Zebras, giraffes, rhinos, lions, elephants and antelope all made appearances, much to the delight of the 24 travelers who had crossed an ocean to see them. But by the trip’s end, the thrill of seeing exotic animals had been eclipsed by a more intimate African encounter: a half-day visit to a village on the Lower Zambezi River. “To a person,” says Al Jones, who posed the question to his fellow travelers, “we all named it a highlight of the trip.”

The village, Chiawa, is a local cultural center, and residents rolled out the welcome mat with traditional dancing, a formal greeting from the village chief, and impromptu lessons on grinding corn. The villagers’ warmth and generosity—despite threadbare clothes, bare feet and meager possessions—astonished the visitors. They were also stunned by another fact of village life: pervasive illness and disease. Jones was appalled by the suffering he saw, including disabled children (one boy, his legs bent and splayed, moved about on callused knees) and a ringworm infection that plagued half the village kids.

Thanks to a previous visitor, the village had a supply of ringworm medication, but no one in Chiawa knew how to use it. No one, that is, except Jones, a retired physician and 1963 graduate of the UW School of Medicine. He stepped in to treat a boy with an especially bad case, and organized a brief how-to clinic with local mothers. Word came back a few months later that his efforts had cured the entire village of ringworm. But it recurred. The next time, though, villagers knew just what to do.

Moved by their short visit, Jones and the other UW Alumni Tours participants donated money to buy chairs for Chiawa’s school—a bare-bones concrete room, with a lone chalkboard hanging askew on one wall. But the group wanted to do more. “We have so much and they have nothing,” says Jones. With the visit lingering in his mind a couple months after his return home to California, he contacted the group’s tour guide, Robyn Steegstra: What could they do?

“I see this in tour after tour,” says Steegstra. “People want to contribute but they don’t know how. They often want easy ways to give back.” She credits Jones’ heroic persistence with making a real difference for area villagers. After extensive consultation with local residents, and a few false starts, the most pressing need came to light: a solar-powered refrigerator for a health clinic in a neighboring village. Workers there were doing the best they could, storing medications in a bucket of ice, because perishable vaccines—tetanus, polio, diphtheria—require refrigeration in order to be effective.

Then there was the matter of the missing nurse. In Zambia, Jones explains, nurses won’t come to work in village clinics unless there’s refrigeration already in place. “It’s such a little thing,” he says of the fridge, “but it means all the world to them.” It was an effort to see the donation through. More than two years elapsed between the UW group’s visit and the arrival of the refrigerator in its new home. All told, the tour participants contributed about $3,500 to purchase and transport the appliance. Along the way, the effort was buoyed by everyone from the manager of a local lodge (who flew the fridge from the capital city to the Lower Zambezi) to an itinerant graduate student with firsthand knowledge of the African bush.

The group’s generosity has inspired other travelers, all of whom have donated “on the spot” to support local efforts, says UW travel director Pauline Ranieri. Tour participant Cheryl House, ’66, sent a duffel bag of soccer balls (specially designed to withstand thorny, rocky playing fields) for local kids. Steegstra, the tour guide, led a fundraising effort that supplied a wheelchair for the Chiawa boy who is unable to walk. When Jones’ daughter recently turned 30, she used her birthday money to buy benches for the village health clinic.

Next up? Jones dreams of constructing a second building dedicated solely to obstetrics. There’s talk of creating a foundation. But donations flow more easily, he’s found, when travelers can see the conditions firsthand. “The need just totally blows your mind,” he says. “You don’t have to be a rocket scientist to do some good in Africa.”

Kelly Huffman is a frequent contributor to Columns