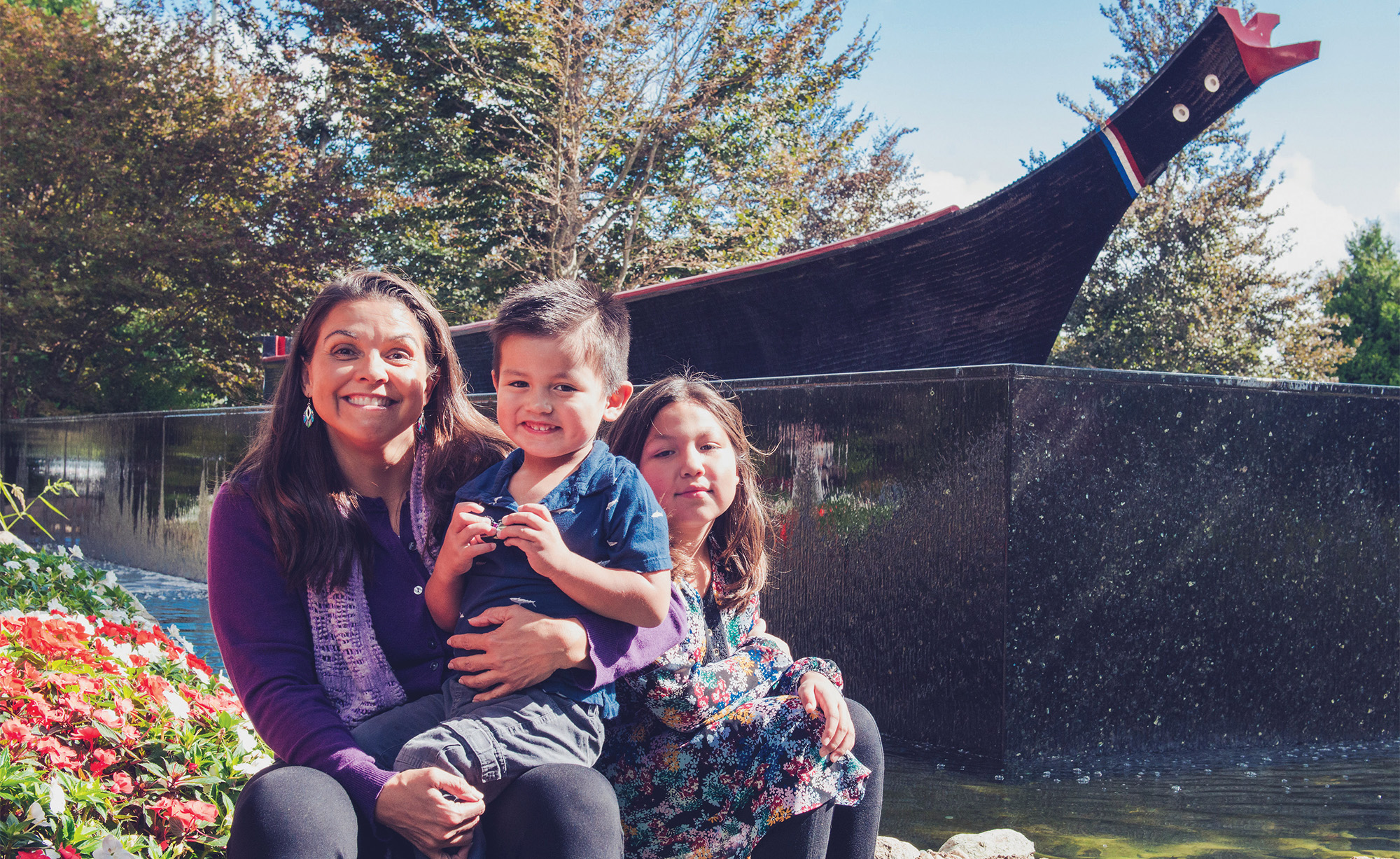 The ways we see

Professor Stephanie Fryberg draws on her own life to build support for Indigenous children.

Stephanie Fryberg looks out at the water. The morning air is cold and damp. The pebbly cove is littered with large driftwood logs swept ashore by December’s high tides.

This is Hermosa Beach on the Tulalip Indian Reservation, a 7½-mile drive northwest of Marysville. Dozens of Fryberg family homes sit on the land that slopes gently up from the beach. Fryberg’s great-grandfather bought the 72-acre property after the mostly wetlands interior land assigned to him by the federal government proved too remote and difficult to cultivate. He gave each of his children an acre.

Fryberg, a professor of psychology and American Indian Studies at the University of Washington, grew up here, steps from her grandparents’ house and next door to her aunts and uncles.

In her memory, it is summer. She is with dozens of her cousins, exploring the shore, swimming and eating sandwiches delivered for lunch by her grandparents. In the evening after work, Fryberg’s aunts and uncles join the children for a feast of potato salad and crab her grandfather caught in Puget Sound.

“Every decision I’ve made in my life has been about trying to make my grandparents proud,” Fryberg says. In 2012, she bought a house just over the ridge from Hermosa Beach. On warmer days, her son and daughter ride stand-up paddle boards and watch gray whales feed near the shore in the same water where she played as a child.

“Living in my community reminds me every day why I do what I do,” Fryberg says.

Fryberg’s research branches in two directions. She studies perceptions of Native Americans and how students are affected by a lack of cultural awareness in the classroom. In both areas, her goal is making change outside of academia. “I don’t have a lot of interest in doing research for theory’s sake,” she says.

Last month, Fryberg delivered the Samuel E. Kelly Distinguished Faculty Lecture hosted by the Office of Minority Affairs & Diversity. She built her talk around the data she and the researchers and students in her laboratory have compiled over the past several years. Her findings, based in part on two surveys of over 9,000 college students and adults around the country, revealed the persistence of outdated, romanticized and negative stereotypes, and an overall lack of awareness about Native Americans in contemporary America. “For the most part, we’re invisible to people,” Fryberg says.

Erasing indigenous people from the national narrative and diminishing their current contributions makes it is difficult for Native American children to see how and where they fit, Fryberg’s research shows. Non-native people are also less likely to notice or understand the inequalities and discrimination Native people continue to face. In 2012, the poverty rate for Native Americans was 26 percent––more than double the rate for whites, according to the U.S. Department of Health and Human Services. Native Americans also have higher rates of infant mortality, diabetes and suicide than white Americans. “If we think that a group doesn’t exist, we don’t feel a sense of responsibility to make changes for them,” Fryberg says.

In demonstrating a link between invisibility and bias, Fryberg’s research reveals the consequences of writing Native Americans out of the contemporary story, says Crystal Echo Hawk, co-founder of Reclaiming Native Truth, an independent research project designed to assess public opinion about Native Americans.

“Some of the most groundbreaking work of the entire project came out of what [Fryberg] did,” says Echo Hawk, who also consults on film and TV projects as the founder of IllumiNative, a nonprofit organization working to end the invisibility and harmful narratives about Native Americans. She often uses Fryberg’s findings to argue for Native American representation. “By just our omission you are creating bias,” Echo Hawk says. “This is not just about diversity. It’s an anti-racism initiative.”

Fryberg’s profession emerges directly from her connections to her family, her tribe and the land where she grew up. On a recent drive around the 22,000-acre Tulalip Reservation, she describes the changes she’s seen over the past several decades.

“I saw my community transform from one where there was a lot of helplessness and hopelessness to one where we started taking charge because we were finally able to.”

Members of the extended Fryberg family have been central to the community’s development, helping lead the tribe after the federal Indian Self-Determination and Education Assistance Act passed in 1975. The law gave Native Americans more control over their own governance and resources. “I saw my community transform from one where there was a lot of helplessness and hopelessness to one where we started taking charge because we were finally able to,” Fryberg says.

During the 1970s and ’80s, when Fryberg was a child, most Native Tulalip residents relied on fishing for income and food. Their resources and support services were limited. She points to the portable trailers that once housed the reservation’s only health clinic.

Since then, the Tulalip Resort Casino, which opened in 2004, along with an outlet mall and other businesses have funneled millions of dollars back into the community to provide services for some 2,600 tribal residents of the reservation, according to the Tulalip Tribes website. In 2003, the tribes built a $9 million health and wellness center. New athletic fields and a skate park overlooking Tulalip Bay were completed in 2016. In 2017, the Tulalip Tribes was the fourth-largest employer in Snohomish County, according to Economic Alliance Snohomish County.

As a child, Fryberg remembers sitting on the couch with her shoes off at her uncle Clarence Hatch’s house, listening to the adults discuss how the tribe should grow and change, which businesses to pursue, and how to maintain a connection to tribal culture. Hatch, who died in 1992, served on the tribal council board and was executive director of the Tulalip Tribes for 13 years.

“I was always a kid who kind of stepped back and watched,” Fryberg says, stealing bites of lunch in her UW office during a short break between meeting with a graduate student and her next lecture. “I was always very interested in why the world worked the way it did.”

After high school, Fryberg left for Whitman College planning to study math. She was soon preoccupied by “achievement guilt.” She wondered why she made it to college while other kids from the reservation did not. “It just seemed to me growing up that there were a lot of really smart kids from the tribe,” she says. “We’d all grown up together, yet there was a period of time when the majority of them dropped out. Why?”

Fryberg transferred to Kenyon College in Ohio and discovered social psychology. The new discipline gave her a framework to ask questions about how low expectations, bias and stereotypes stymie Native American children. Native Americans graduate from high school at lower rates than white students and earn undergraduate degrees at about half the rate of the overall population, according to the National Indian Education Association. They are also less likely to take advanced placement classes in high school.

“It seemed to me growing up that there were a lot of really smart kids from the tribe. We’d all grown up together, yet there was a period of time when the majority of them dropped out. Why?”

Every one of the children she grew up with should have been successful, says Fryberg. Instead they were subtly pushed out of school, given messages that they did not belong and could not succeed.

Fryberg has spent much of her career trying to correct what she calls cultural mismatches between teachers and students in the classroom. In 2011, while on sabbatical from the University of Arizona, she joined a group of administrators and teachers in the Marysville School District who wanted to find a new approach to educating Native kids. Tulalip Elementary, the school Fryberg attended on the reservation, was merged with Quil Ceda Elementary. Both schools had a large Native student population and low scores on the state’s standardized tests. “We had leaders at the time who were saying, ‘OK, what we’re doing isn’t working. Let’s put everything on the table,’” Fryberg says.

Where test scores measured deficits, Fryberg and her colleagues saw strengths in Native American students that could be tapped to improve their academic performance as well as foster a sense of belonging and safety. The team trained teachers, who were mostly white, to recognize that their students were arriving at school with different cultural frameworks and expectations. “We were looking for places for our children to be their full selves,” says Anthony Craig, principal of Quil Ceda Tulalip Elementary School from 2011 to 2016. Craig is now director of the Leadership for Learning doctorate in education program at UW’s College of Education.

Three years later, the number of Native students at the elementary school whose test scores met Washington state standards had increased by 18 percent.

Using almost two decades of research in Marysville and other school districts, Fryberg and her team are designing a model to help teachers create classrooms where all students feel safe and welcome.

Most American schools, she says, emphasize independence and choice as the path to achievement and success. “It’s a really good, important way of being, but it turns out most of the world doesn’t do that.”

Instead, many children come from cultures that prioritize interdependence over the individual, she explains. Interdependent cultures see accomplishments arising from relationships and working in groups. “They teach children to know their roles and responsibilities and who they are in relation to others around them,” says Fryberg, who adds that children do best when teachers understand how to recognize and make space for different cultural approaches.

“Is it the responsibility of a teacher or a 5-year-old to find safety in a classroom?”
she says.

Fryberg’s work with Echo Shaw Elementary in Oregon changed the way teachers and administrators communicate with students, Principal Perla Rodriguez says. At Echo Shaw, about 25 miles west of Portland, 85 percent of students are Latino and 90 percent qualify for free and reduced lunch.

Simple adjustments like asking students how their families spend time together rather than focusing on the individual child’s weekend plans made a real difference in students’ enthusiasm and engagement with their teachers, Rodriguez says. “The kids, they just light up,” she says. “In that interdependent culture it isn’t just about the child.”

In the latest phase of Fryberg’s research about bias against Native Americans, she asks what it would take for Americans to develop a more accurate view of contemporary Native people.

The public feud between Massachusetts Sen. Elizabeth Warren and President Trump, she says, is just one example of how the national conversation falls short. When Trump uses “Pocahontas” as an invective to mock Warren’s claims to Native American ancestry, his rhetoric invokes a painful history of colonization and violence, she says. Many Native Americans struggle with the fallout of that history. The back-and-forth between two prominent politicians takes the focus off of the problems Native people face today, and erases their historical experience.

“They’re using our image and our identity as a pawn, and it’s not benefiting us in any way,” Fryberg says. “If anything, it’s just adding more fuel to past harm.”