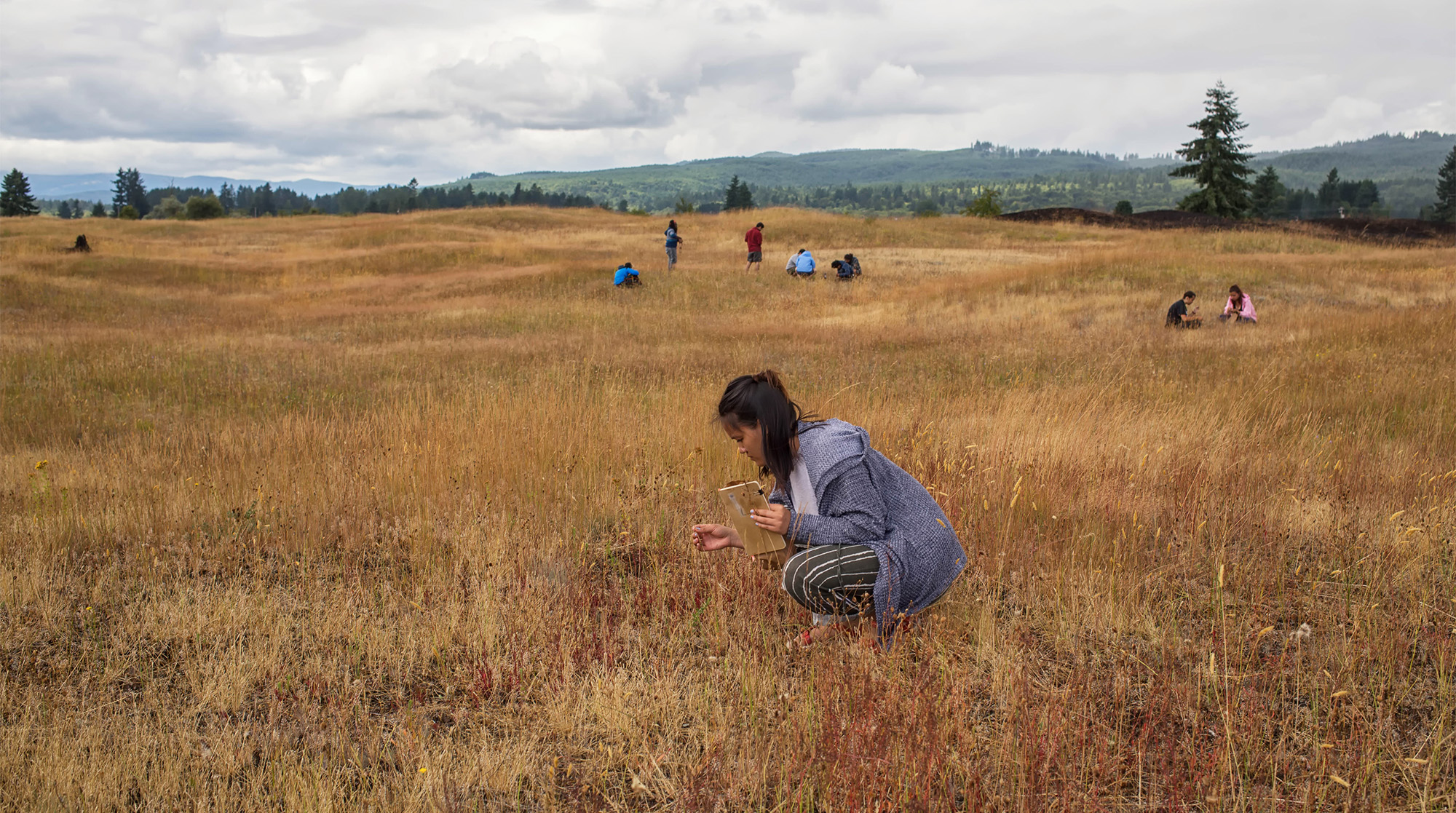 Changing the faces and future of conservation

One morning in July, Sierra Campbell awoke in a tent and unzipped the flap to a view of mountain prairie bathed in sunlight. Though she’d been exploring Washington for weeks, the scene touched the UW sophomore from Fife in a way that reinforced her desire to make a difference in the environment.

It was one of many impressions Campbell collected through the summer as she and a diverse group of undergraduates took a crash course in the region’s natural resources. At the start of the season, Campbell and UW classmate Hannah Wilson packed their backpacks and laced up their boots to join about 20 students from around the country for an eight-week intensive survey of the state, seeing industrial sites and wilderness ecosystems and meeting a range of people from park rangers to urban activists.

They toured a Superfund site with the Duwamish River Cleanup Coalition and learned about grassroots efforts there to protect fish, wildlife and human health. They studied salmon and dams on the Skagit River, wandered through a landscape managed for thousands of years by the Quinault people, and visited exposed areas of the Elwha River that had been underwater behind a dam for more than a century.

The Doris Duke Charitable Foundation funds the Doris Duke Conservation Scholars Program at the UW and four other universities around the country with the goal of helping diversify the conservation workforce. The program, which is also supported by Wilberforce and the National Fish and Wildlife Foundation, was started in 2014 when it became clear that the environmental movement had made no strides in decades to address its lack of racial and gender diversity, a problem commonly known as the Green Ceiling. Simply put, no more than 12 percent of all employees in non-governmental organizations and foundations that work with natural resources could be described as ethnic minority or multiracial.

While more than 35 percent of the U.S. population is people of color, the mainstream environmental movement—from individual volunteers to billion-dollar foundations—is predominantly white. At the same time, when it comes to natural resource and environmental problems, people of color are disproportionately affected. A group of conservation scholars share a moment of bonding before setting out to explore the prairie. The scholars tour South Sound Prairies, learning about native butterflies and efforts to support their survival by restoring native plants.

From what he’s seen, most conservation projects have been led by white professionals, says José Ochoa, a UW Ph.D. student in political science and one of the graduate teaching assistants with the program. With white faces and values in the forefront, people of color are pushed to the fringes, he says. “They are not apathetic when it comes to conservation. It’s just that it has been defined as a white issue.”

Why? A recent Harvard University report surveyed nearly 200 nonprofits as well as governmental and major grant-making organizations. It found that these groups claim to want to be more diverse, but have done little to remove the race and gender ceilings. The report cited unconscious bias, discrimination and insular recruiting as the key reasons organizations have failed to change.

To counter this, the Doris Duke Conservation Scholars Program works with students, charitable foundations, volunteer organizations and many other entities to foreground more voices and cultures. The student participants receive a $4,000 stipend each summer, room (sometimes in a tent) and board, and new natural and social science skills that will serve them in their careers to come. Professor Martha Groom (Ecology and Environmental Studies) is a cofounder and the principal investigator of the program, which is housed in the College of the Environment.

“This year of the program really changed how I see myself in the environmental field,” says Campbell (Crow Nation), who grew up on the Puyallup Reservation. “I realized that as much as I enjoy doing research and being outside in that way, I really don’t want to do it for any long period of time.” Instead, she sees herself working more closely with communities addressing issues that directly affect them. Teaching Assistant José Ochoa-Argello is a Ph.D student in political science at the University of Washington. His research examines how people of color in the U.S. conceptualize the environment and act upon environmental preferences and threats.

“The students have a opportunities to engage with different landscapes, organizations and even different knowledge systems,” says Brett Ramey (Iowa Tribe of Kansas and Nebraska), director of the UW’s Doris Duke Conservation Scholars Program. “In all that diversity of experiences and perspectives the strongest solution-based action will come.”

These students are the next generation of conservation leaders and the UW-based program is designed to help them develop perspectives and skill sets using what they learned about community identities, biodiversity and environmental justice here in the state of Washington.

Next summer, in the second year of the program, Wilson, Campbell and their fellow scholars will return to work directly with environmental groups, tribes and communities. Their projects include studying the impacts of climate change on Mount Rainier’s ecosystems, performing stream monitoring on the Quinault Indian Nation, restoring native plants to the Elwha basin, and working on water quality in King County lakes. Susan Waters, ’13, a rare species ecologist at the Center for Natural Lands Management, tells the scholars about the recovery of native butterflies and pollinators on a tour through the prairie habitat.

Wilson, a Bay Area resident, enrolled at the UW already knowing she wanted to study environmental science. “I grew up learning a lot about climate change, but it wasn’t really in terms of environmental justice,” she says. “I didn’t know specifically what I wanted to address.”

Now, at the end of her first summer as a conservation scholar, she sees a much bigger picture. Hearing directly from communities about how climate change is affecting them honed her understanding. “I realized I want to do Superfund cleanup or work with a community through a problem they’re having,” she says. “I want to do both ecological restoration and community outreach.”

And she will be able to do it with a knowledge of the region and a network of people that will serve her in ways she has yet to imagine. “I have never been to most places that we visited,” says Wilson. “But a few really resonated with me: the Quinault reservation, Mount St. Helens, Seattle’s South Park community. Seeing these places and being with the other students, you really feel like you’re not alone in this environmental movement.” After spending eight weeks this summer exploring Washington’s landscapes and communities, UW student Sierra Campbell has a clearer idea of how she can pursue a career in conservation. She visits a site where fire was used to control invasive plant species.