University of Washington surgeons in October performed the world’s first surgical procedure to implant a device that could give hope to millions of people suffering from Ménière’s disease—an insidious, mysterious disorder that causes vertigo, hearing loss, ringing in the ear and a feeling of pressure in the ear.

Named for Prosper Ménière, a French physician who in 1861 published his theory that symptoms of the disease could be traced to inner-ear problems, the affliction has no known cause, and no cure. It affects approximately one of out every 1,000 people, or less than 1 percent of the U.S. population.

Without a cure, treatments have been aimed at managing symptoms. Lifestyle and diet modifications —eliminating salt from the diet, avoiding alcohol and caffeine, stopping smoking, limiting stress—have provided some relief.

So have medications, middle-ear injections and hearing aids. Surgical procedures were a last resort because they could fix some problems with substantial cost to the patient. That’s why the surgery, performed by a UW team led by Dr. Jay Rubinstein, holds such promise.

The UW device, which was implanted into a Yakima man, is essentially a cochlear implant with new electrodes and software. It is being tested in a 10-person surgical trial. 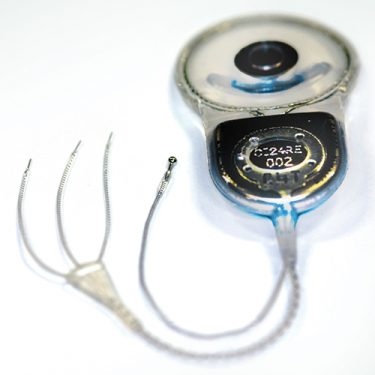 The UW’s new device is based on a cochlear implant.

“What we’re proposing here is a potentially safer and more effective therapy than exists now,” says Rubinstein, who holds a Ph.D. in bioengineering and is director of the UW’s Virginia Merrill Bloedel Hearing Research Center.

Ménière’s occurs mostly in people between the ages of 30 and 50, but it can strike anyone at any time. Rubinstein has seen it develop in a child of 6 and a man of 86.

The disease is so maddening because it can affect balance and hearing with varying intensity and frequency. Its episodic vertigo—lasting up to 20 minutes per episode—is thought to stem from the rupture of an inner-ear membrane. That can cause endolymphatic fluid to leak out of the vestibular system, causing havoc to the brain’s perception of balance.

To stave off nausea, people must lie still for hours while the membrane repairs itself and equilibrium can be restored, says Phillips, director of the UW Dizziness and Balance Center.

Because the attacks come with little warning, a diagnosis of Ménière’s can force people to change careers and make other drastic adjustments, such as giving up driving.

Many patients do respond to first-line treatments—medications and changes in diet and activity. But when these therapies fail to reduce the rate of attacks, surgery is often an effective option but is often destructive in nature. In essence, a patient sacrifices function in the affected ear to halt the vertigo—akin to a pilot who shuts down an erratic engine during flight. Forever after, a person’s balance, and often, hearing rely on the function of just one ear.

With this new device, Rubinstein and Phillips are aiming to restore a patient’s balance during attacks while leaving natural hearing and residual balance function intact. 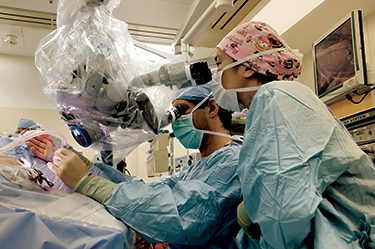 This is how it works: A patient wears a processor behind the affected ear, and activates it as an attack starts. The processor wirelessly signals the device under the skin, which transmits electrical impulses through three wires inserted into the canals of the inner ear’s bony labyrinth.

“It’s an override,” Phillips says. “It doesn’t change what is happening in the ear, but it may eliminate the symptoms while replacing the function of that ear until it recovers.”

A grant from the National Institutes of Health funded the development of the device and its testing. The U.S. Food and Drug Administration approved the device in June. A grant from the Coulter Foundation is helping cover the costs of the human trials, which could help UW researchers see if the device could help millions of people who are affected with common balance disorders.

By basing their invention on cochlear implants, whose design and surgical implantation were already FDA-approved, Phillips and Rubinstein were able to leapfrog scientists at other institutions who had begun devising prototypes years ago.

“If you started from scratch,” says Rubinstein, “in a circumstance like this, where no one has ever treated a vestibular disorder with a device, it would probably take 10 years to develop such a device.”

A successful human trial could lead the implant to becoming the first-choice surgical intervention for Ménière’s, Phillips says, and spark collaboration with other researchers studying more widespread balance disorders.

The first patient was Gene Pugnetti, 56, of Yakima. He has unilateral Ménière’s disease and has been a patient of Rubinstein’s for about two years.

Cochlear Ltd. of Lane Cove, Australia, is manufacturing the 10 devices for the surgical trial.