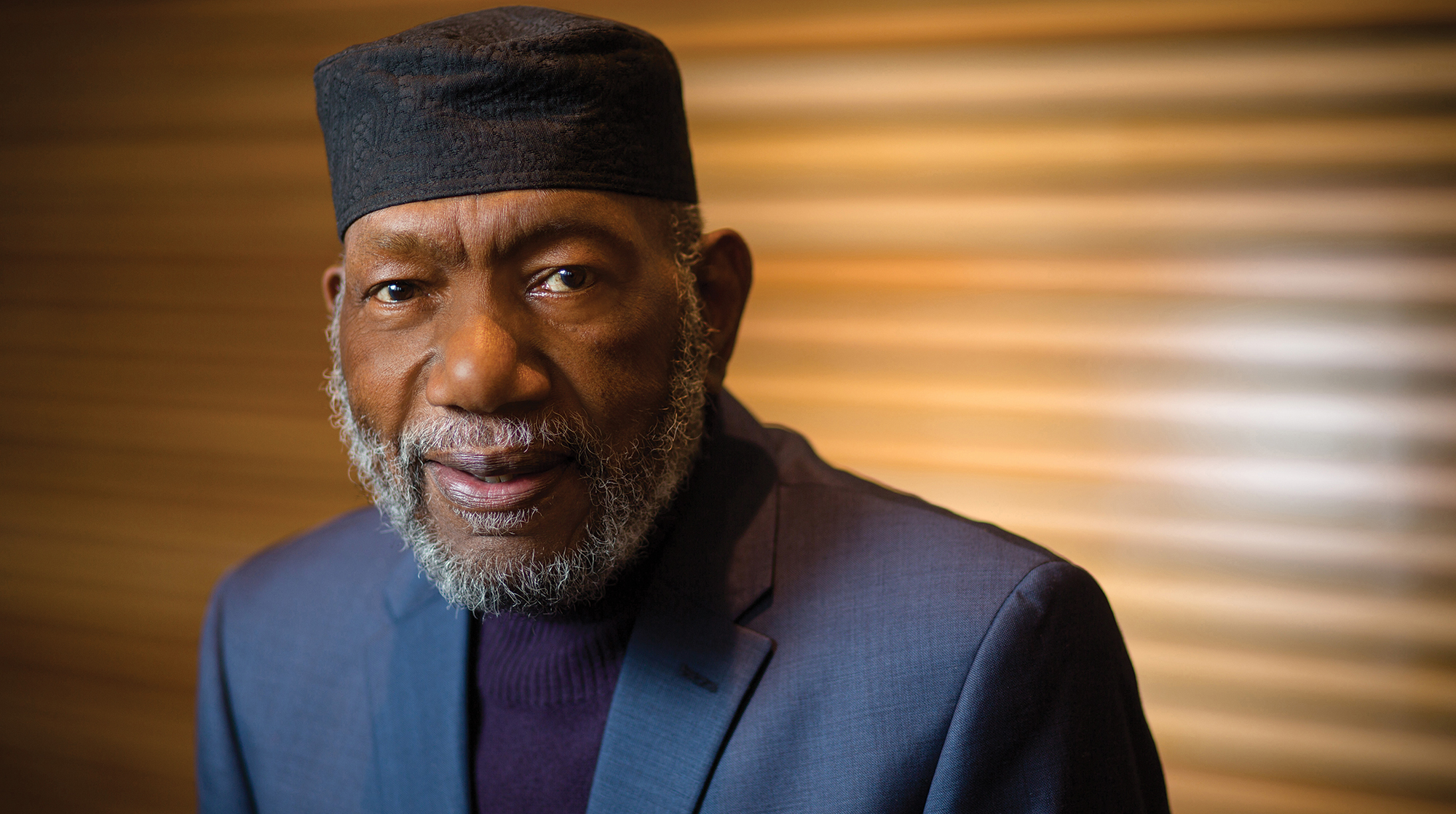 It’s nearly impossible to measure the impact the late Thaddeus Spratlen had on the University of Washington community during his 40-year career. The first African American faculty member to join the Foster School of Business, Spratlen taught and mentored thousands of students over his distinguished career as a professor of marketing. He opened doors for students from underrepresented minority communities, and he showed his commitment to the cause with his generous philanthropy.

One great example was his work with the Multicultural Alumni Partnership (MAP), a club of the UW Alumni Association. Over MAP’s 27-year existence, Spratlen, and his late wife, Lois Price Spratlen, ’76, helped the group raise more than $1 million for UW student scholarships.

“Thad was a giant for diversity,” says Diane Martin, ’74, ’85, who worked with Spratlen for decades in her role as a staff adviser to UW Black business students. “He and Lois were unstoppable in their passion and commitment for advancing diversity and inclusion, equity and social justice. He left an everlasting legacy at the University of Washington, Multicultural Alumni Partnership, Foster School of Business and the greater Puget Sound region.” 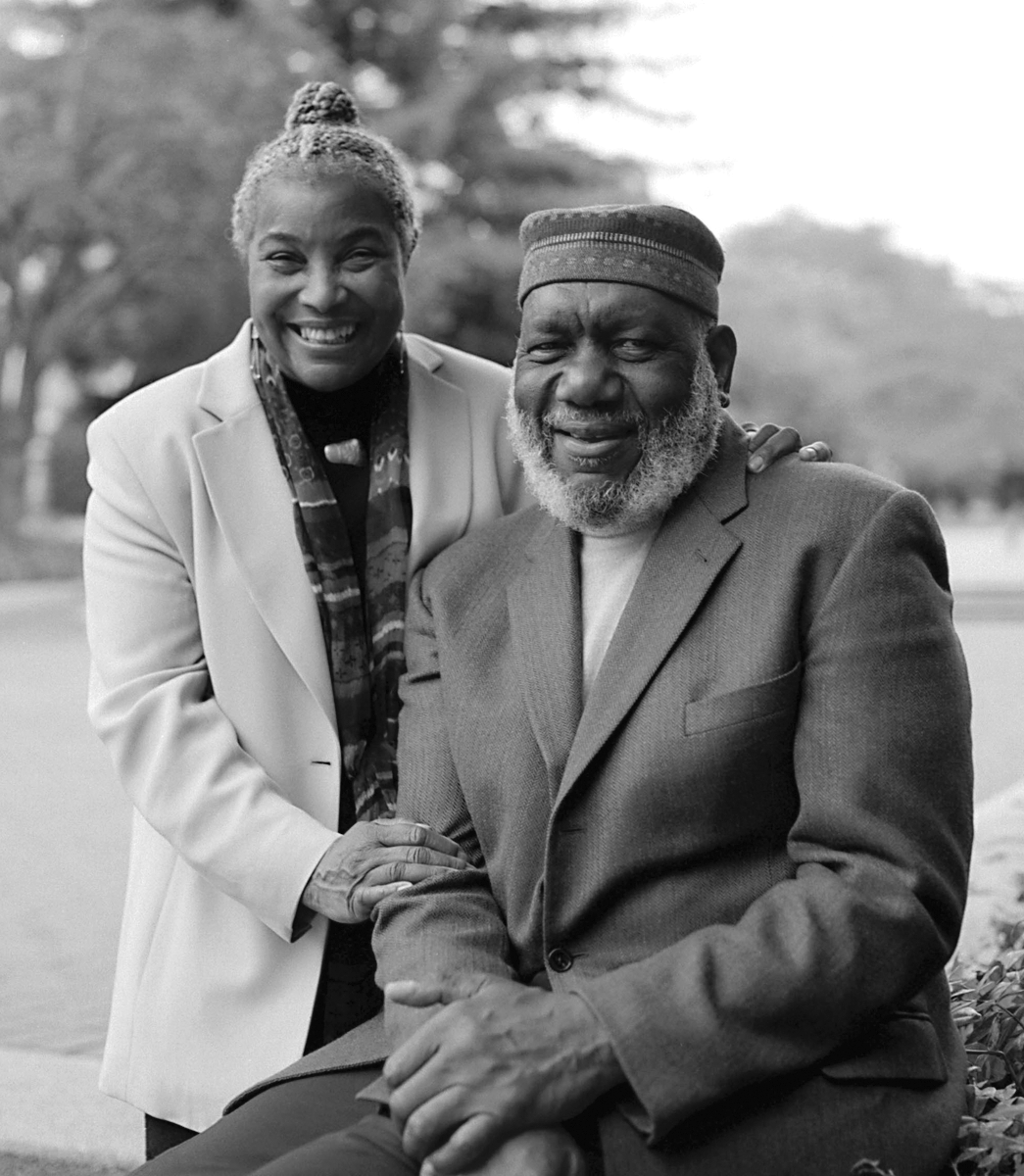 Martin would know; she spent more than 40 years working with Thad in various capacities. In addition to their volunteer work with MAP, they were co-advisers for the Association of Black Business Students, a UW student organization at the Foster School. “We were role models and mentors for hundreds of Black students and helped them to develop critical life skills to ensure that they would achieve academic and professional success,” she explains.

Well before he became involved with MAP more than 15 years ago, Spratlen, who died May 18, 2021 at the age of 90, was a beloved figure. He inspired the Foster School to create a first-of-its-kind Consulting and Business Development Center, in which UW faculty and students provide evidence-based assistance to minority- and women-owned businesses. Lois – who died in 2013 at the age of 81 – was a professor of psychosocial & community health nursing at the UW School of Nursing as well as the campus Ombud who was nationally recognized for her work in diversity, equity, inclusion and belonging. Both joined MAP’s dedicated group of volunteers in 2005 after the club honored them for their many years advocating for inclusion and diversity. That year, Lois was presented with MAP’s most prestigious honor, the Dr. Samuel E. Kelly Award, for her work as UW Ombudsman and Ombudsman for Sexual Harassment. Thaddeus was recognized with a Special Distinguished Alumni Award for his distinguished work mentoring students of color in the business school.

Thad and Lois joined the MAP board and played key roles helping plan and put on the annual MAP Bridging the Gap Breakfast, which raises scholarship funds for deserving UW students. As chair of MAP’s Bridging the Gap Breakfast, Lois and MAP Board member Steve Sumida, ’82, provided oversight in the selection and honoring of community diversity leaders.

The work was very hands-on, says Sumida, retired professor of American Ethnic Studies. “We developed mailing lists of hundreds of addresses and call for registration for the Bridging the Gap Breakfast. We made address labels, stuck them to each envelope, folded and inserted announcements, sorted and mailed them ourselves.”

When Lois died, Thaddeus took over as co-chair of the awards committee with Sumida and their work continued. “When Thad chose to no longer drive his antique Volvo, my wife Gail and I would often give him rides to MAP gatherings,” Sumida recalls. That continued until the pandemic hit.

Thad, who also served as president of MAP from 2008-10, co-produced a special 20th MAP Anniversary Celebration Booklet, entitled “MAP 20 Years: Diversity, Scholarships and Alumni Recognition.” That booklet became a reality due to the incredible work of the entire MAP Board, who did everything from selling ads to UW and community organizations and individuals; to design and production; and the underwriting of the production costs. “I don’t think I emphasized how labor-intensive this project would be,” says MAP co-founder Vivian O.  Lee, ’58, ’59, “but they found out anyway.” The idea for the booklet came from Lee and another MAP co-founder, Larry Matsuda.

“I was very pleased when Thad offered, without being asked, to pay for half of the rather large printing cost when he realized that I was paying for the entire printing bill and also paying to have ads designed,” Lee says. 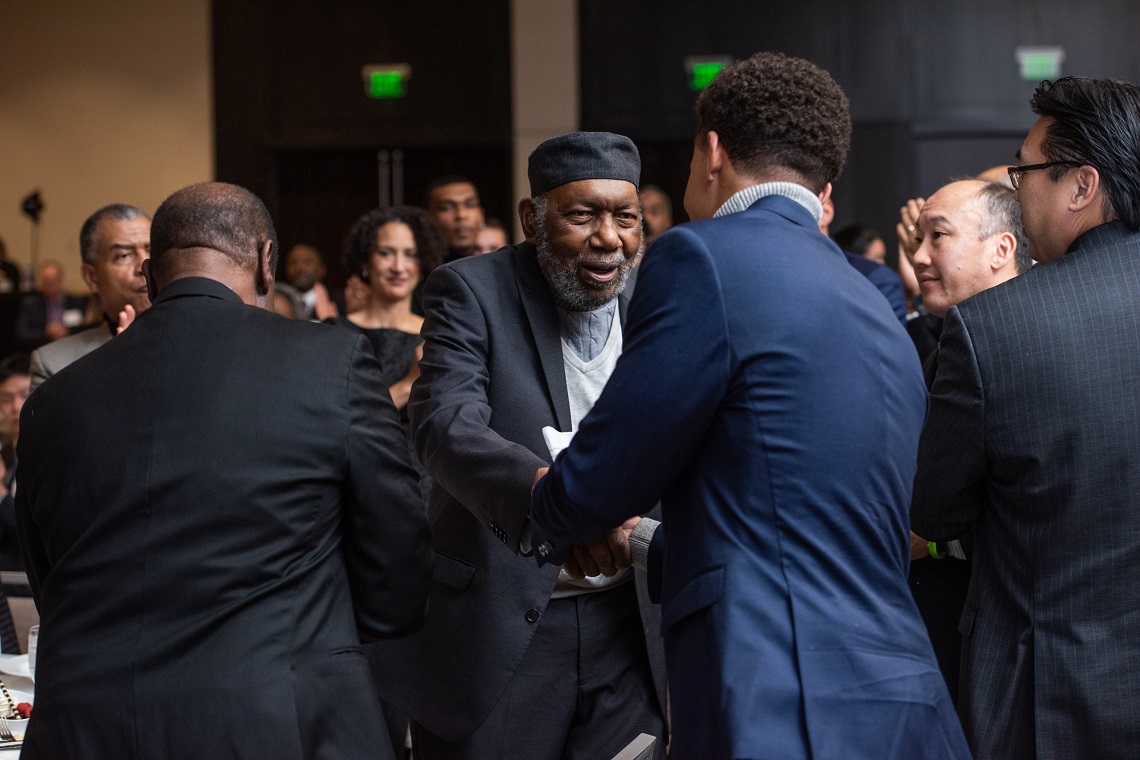 “Thad totally embraced the vision for the MAP 20th anniversary celebration at the HUB and his ‘hands-on’ approach in working on the event by soliciting ads was inspirational to all MAP Board members as they enthusiastically designed and produced the booklet with all costs contributed in-kind by MAP Board members.” All proceeds of the booklet went to the MAP Endowment.

Thad and Lois regularly purchased seats for students to attend the breakfast. Lois always reminded the MAP board of the importance of focusing on the club’s mission in the planning of its diversity events and campus activities. She also advocated for MAP to remain a UWAA club. The Spratlens also graciously hosted MAP board meetings and mailing parties for the breakfast at their residence.

“In 2014, as a tribute to Lois,” Martin recalls, “Thad provided the UW MAP Endowment with a generous gift to create a scholarship titled the Drs. Lois Price Spratlen and Thaddeus Spratlen Scholar. Through his generosity, Thad helped the MAP Endowment reach the $1 million level just before the COVID-19 pandemic.”

Thad and Lois were also very dedicated to the UW and communities of color through their support of Lois in her work with the Mary Mahoney Professional Nurses Organization, the oldest known African American professional organization in the state of Washington. In 2003, the year MAP established the MAP Endowment Fund, Lois was the key person in establishing the Mary Mahoney Professional Nurses Organization Endowment Fund to provide continuing support for nursing students of African descent. Later, it was no surprise that Thad and Lois became endowed members of that fund. They were also influential leading the nursing organization and the UW School of Nursing to become established supporters of the MAP Bridging the Gap Breakfast. 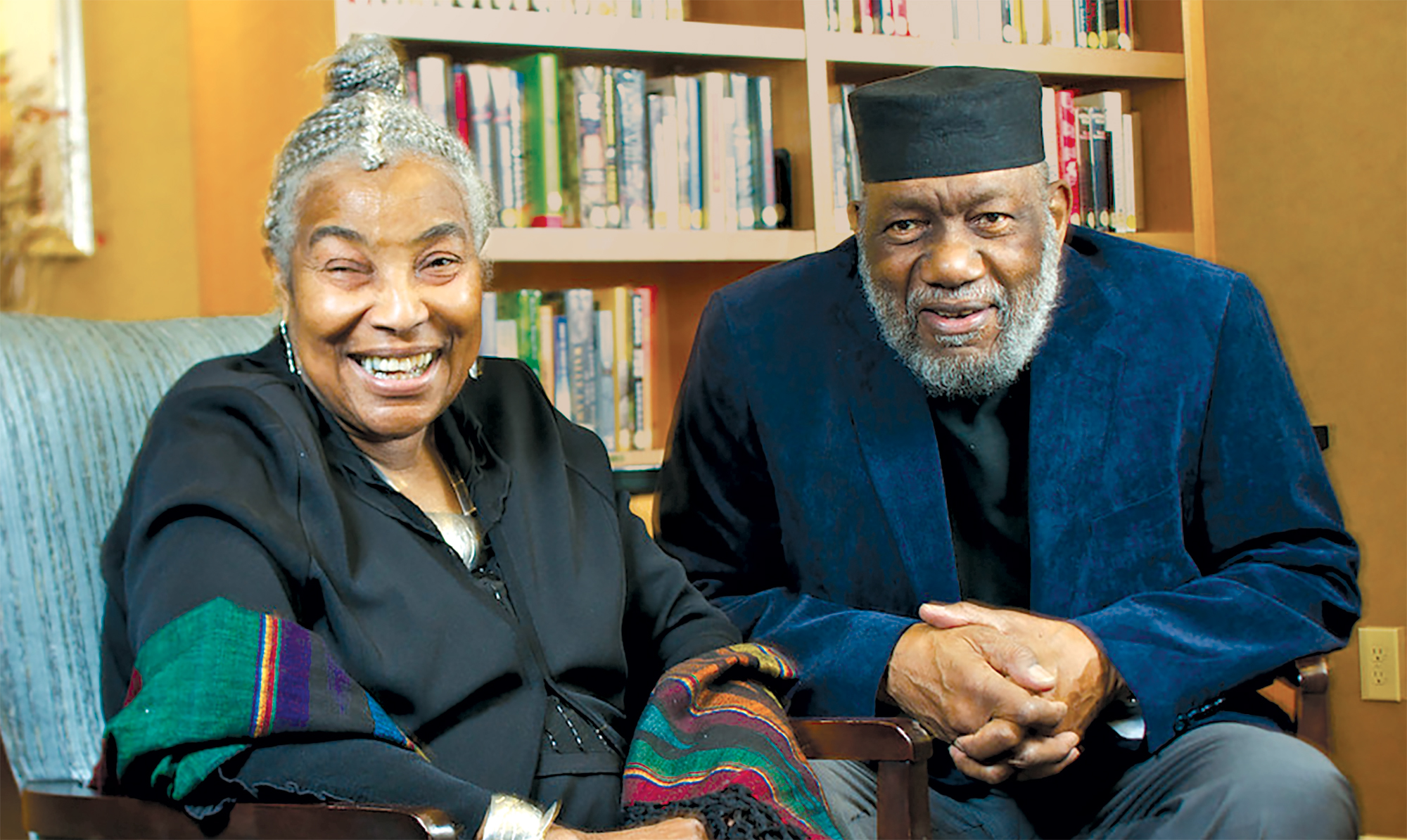 When Lois died, Thad continued to work with the nursing organization and helped support the creation of the Lois Price Spratlen Foundation, which provides support for education of psychiatric and mental health nurses in Washington state. He also transferred the copyright of the book authored by Lois, “African American Registered Nurses in Seattle: The Struggle for Opportunity and Success” to the Mary Mahoney Professional Nurses Organization so all future revenue from the book’s sales would benefit the organization’s endowment fund. This year, seven of the 14 annual Mary Mahoney Professional Nurses Organization scholarships were awarded to UW student nurses.

“Thad and Lois were the epitome of the power couple,” Martin says. “Collectively, they brought to MAP a lifetime of commitment, dedication and experience promoting diversity and inclusion at the UW and in the broader community. They selflessly shared their knowledge, time, personal and professional resources to advance MAP’s mission of diversity, scholarships and alumni recognition.

“Thad was particularly interested in connecting the diverse communities with the UW. He used his influence in the community to successfully bridge the gap and connect UW alumni of color to the UW.”

Adds Sumida: “Thaddeus brought his scholarly expertise in business to MAP but he never lectured us about that. He brought himself as a true leader, a person of great dignity, patience and highly considerate judgment. Lois was the ‘Wise Woman’ counterpart to Thaddeus. She earned formidable respect and was listened to carefully.”

Though they are gone, their legacy of commitment and generosity will live on. And the UW community will forever be grateful for how Thad and Lois dedicated themselves to MAP’s impactful work.