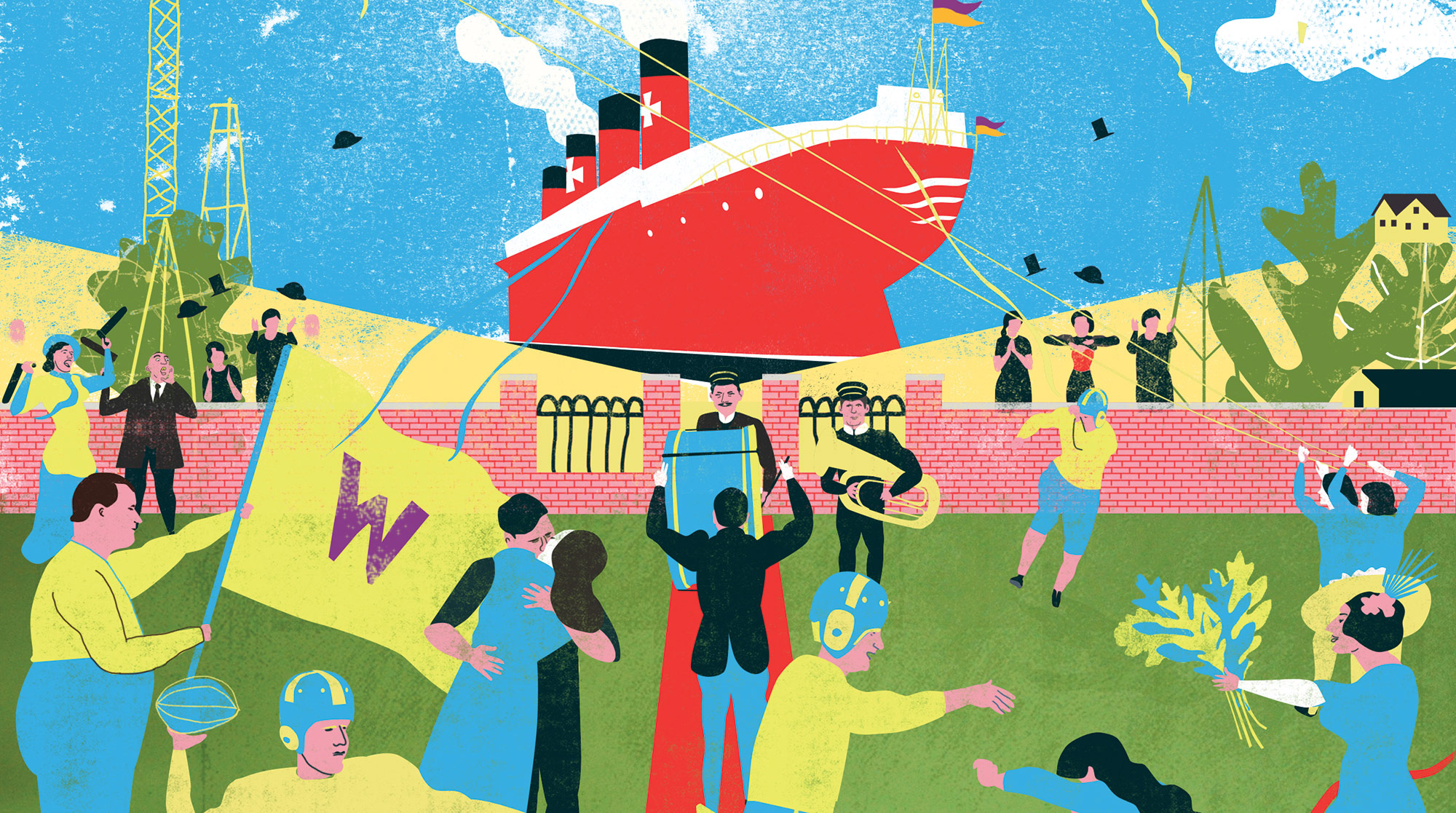 The birth of ‘Bow Down to Washington’

As the USS Congress pulled into San Francisco Bay on the beautiful fall evening of Thursday, Nov. 4, 1915, UW football fans onboard held a boisterous rally on the foredeck under purple and gold streamers strung everywhere from the giant steamship’s rigging. This was the year of the San Francisco World’s Fair, the Pan Pacific International Exposition. The skyline and the fair pavilions on the shoreline formed a magnificent backdrop as the band blared out “Bow Down to Washington” with those onboard singing at the top of their lungs.

Only weeks earlier, The Daily editor Emil E. Hurja and his staff laid out the rules for a contest offering a whopping $25 prize to the composer of a “new Washington song.” No one at the time had an inkling that the winner would go down in history as UW’s famous fight song. Rules required that “the words and music must never have been heard before; it must be catchy, easy to sing and be exclusively a Washington song.”

A $5.00 prize was also offered for the two best yells, with one essential caveat: all entries “must be directed toward the University of California.” But why target California rather than more obvious Northwest rivals? After all, Washington and California had only competed on the gridiron once, a 6–6 stalemate on Thanksgiving in Seattle eleven years earlier. The reason: UW coach Gilmour Dobie. As students returned to school, the football team was in the midst of a 49-game unbeaten streak dating to the last game of 1907. The Bears were just returning to American Rules Football, as they had dropped the game in favor of English Rugby in 1905.

Washington’s dominance didn’t sit well with the rest of the teams in the Pacific Northwest Intercollegiate Conference (Big Six). The league was made up of Washington, Washington State, Oregon, Oregon State, Idaho and Whitman. At their annual year-end conference of 1914, where members arranged game schedules for the following season, a plan was hatched to derail the dynasty. Unbeknownst to Washington, the five other members had gathered for a meeting and laid out a plan to dictate a schedule unfavorable to Dobie’s team. Washington was left with only one game against Whitman.

No West Coast athletic contest of any type had ever aroused such passion.

With its marquee team not having a competitive schedule, the Big Six was left in shambles. Washington chose to make up its own schedule of games and with California now coming out of its long football hibernation, the stage was set for what would become the biggest game ever played on the West Coast. The Cal campus also expressed its enthusiasm for the Big Game in song, as evidenced by student I.B. Kornblum’s “Fight ‘Em,” whose lyrics took dead aim at their northern foe:

Down from the North comes the Purple and Gold,
To skin our Golden Bear;
Washington’s ’leven can never hold
The charge of our mighty Bear.
Our team on the field is a line of steel,
And every man is game;
When the strength of the Blue and Gold they feel,
Those Northmen will be tame.

This combative taunt from the south landed on the pages of the Daily while Washington’s song contest was well under way, further fueling the flames of the rivalry. Husky fans reserved the SS Congress for transport between Seattle and San Francisco for the game. A campus-wide campaign titled the “Big Trip” with its own slogan “$16.00 Will Do It” (cost of round-trip passage) was announced. Major “Send the Band” fund-raisers included a moving picture vaudeville benefit, two “Rooter’s Club California” dances, a raffle offering free round-trip passage, and a call for donations from campus service organizations. No West Coast athletic contest of any type had ever aroused such passion.

Ultimately, 14 entries were considered in the Daily’s contest, but it was class of 1913 alum Lester J. Wilson’s “Bow Down to Washington” that took top honors. The song was overwhelmingly endorsed by fans in a trial run at halftime of the Whitman game played at Denny Field on Oct. 30, 1915, a 27–0 Washington victory. Wilson accompanied on a piano carried over to the field from the gymnasium.

Both the “$16.00 Will Do It” and “Send The Band” campaigns met with incredible success. There were 296 fans, plus 20 members of the marching band, onboard the USS Congress for the trip to San Francisco Bay. The Daily was unrestrained in reporting the sendoff as “perhaps the greatest spontaneous expression of enthusiasm that has ever been witnessed in the history of the university.” “The Alma Mater” was sung as the USS Congress casted off, but “Bow Down to Washington” was the song of choice as the ship plied its way down the coast. The trip provided the Washington delegation a welcome opportunity to practice their new award-winning cheers and to rehearse their freshly minted musical rebuttal to the Golden Bears’ challenge.

Friday, the day before the big game, was declared ‘University of Washington Day’ at the World’s Fair, where President Suzzallo gave a speech and accepted a bronze plaque. Fans were treated to a daylong gala reception including dancing and entertainment at the Washington State Pavilion, yet another opportunity to break into “Bow Down.”

The Hotel Carlton was headquarters in Berkeley for the Washington delegation. On game day, bandleader Bruce McDougall led the marching band, 300 impassioned fans and “The Hook,” the symbol of Washington’s unparalleled victory streak, on a serpentine walk across the crowded campus to California Field. With added gusto, “Bow Down to Washington” was now formally introduced to the lair of the Golden Bear.

And finally … there was a football game to be played. But for this enormously anticipated spectacle, the 60 minutes of football contested on this beautiful fall day of Nov. 6, 1915 was decidedly anticlimactic. The many headlines up and down the coast said it all: “Golden Bear Crushed,” “Total Domination,” “Varsity Crushes California” and “Grind of Washington Machine Goalwards Shock to California.” The 72–0 outcome was convincing proof that Coach Dobie fully deserved the accolade given him in the “Bow Down to Washington” chorus: “Dobie, Dobie Pride of Washington.”

­An updated version of “Bow Down”

Over its long history, there have been five versions of the official fight song. As times change it’s certainly anticipated that a symbol of such consequence would evolve. Dedicated to the spirit of the amazing women of the Women’s Rally Committee of 1915, the first verse “men” and “boys” in the chorus have been replaced with gender neutral “teams.” Husky fans everywhere will rejoice in the knowledge that today, “Bow Down To Washington” reflects equal respect for ALL ATHLETES.

Bow Down to Washington

So heaven help the foes of Washington.  They’re trembling at the feet of mighty Washington.  Our teams are there with bells . Their fighting blood excels.  It’s harder to push them over the line than pass the Dardanelles.

Lynn Borland, ’66, led the campaign to honor football coach Gil Dobie at Husky Stadium. A diehard Husky fan, he still bleeds purple and gold from his home in Los Angeles.