In Puerto Rico, UW team learns as it helps

Six months after the hurricanes and five months before power was restored, UW volunteers worked with community organizers to install solar panels on rooftops in a remote part of Puerto Rico, bringing power to those who needed it most.

In the light of a March sunset, an SUV pulls up near a squat, green house in Jayuya. Like many homes in this central Puerto Rico mountain community, it is built into a hillside. A stack of uneven concrete steps connects it to the street below, while a slope burdened with tropical vegetation rises up behind.

A Doberman keeps watch as four strangers approach the homeowner. Their words are drowned out by the oppressive drill of a gasoline generator enthroned on a carport littered with tools. The four visitors, all engineers from the University of Washington, shout and gesture toward the house’s corrugated metal roof. When the man finally nods and walks to the generator to silence it, the playful, popping croaks of amphibians fill the void.

The team from the UW works quickly in the fading light of the day. Mareldi Ahumada Parás and Wesley Tatum, both doctoral students in engineering, climb to the roof to secure four flexible solar panels with lengths of bright yellow rope.

“Are you finished?” shouts Anya Raj, ’17, from the ground. “Can I feed the wires through?” Tatum nods, and Raj eases wires originating from the panels on the roof into the house through a small hole in the wall. Hugo Pontes, a UW undergraduate, lights their efforts with his smartphone. Then the team connects the wires to a battery inside the home. As they complete their work, a teenager emerges from the house and restarts the gasoline generator for one more night.

This home hasn’t been connected to Puerto Rico’s power grid in six months, not since Hurricane Maria blew through and triggered the longest blackout in U.S. history. At the time of the visit, roughly 150,000 businesses and homes were still without power. Rising to meet the need, UW students, public health scientists and engineers have organized to assist those in this region with the greatest needs, and to learn from them. 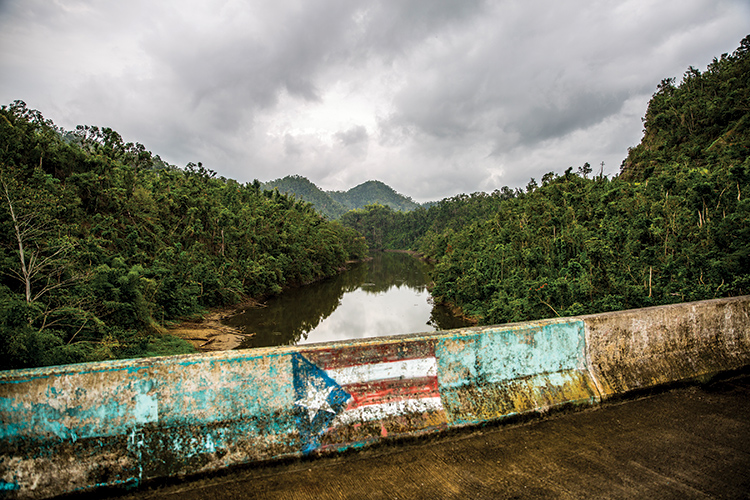 Much of Jayuya is rugged and mountainous, which added to the challenge of restoring electricity.

At the house on the hillside, one of the family members suffers from sleep apnea, a disorder that can lead to cardiac and respiratory problems. He has relied on the generator to power the medical device he needs to breathe at night. Now that Ahumada, Tatum, Raj and Pontes have completed their work, this will be the last night that the family will rely on their generator. The solar/battery nanogrid system will do the job—no gas, no fumes, no noise. Just as the mosquitoes emerge, the UW team packs up and drives off to the valley below filled with homes, most of them dark.

This small team and dozens of UW engineers and public health scientists are assessing the long-term impact of Puerto Rico’s power loss on the people of the island’s mountainous central interior. Over four days in late March, they crisscrossed the 39-square-mile municipality of Jayuya, which includes the highest peaks in Puerto Rico and hundreds of miles of single-lane roads that switchback up mountain slopes.

“It is invisible suffering. You don’t know what the situation is until you go into homes and see exactly how people are getting by.”

The UW teams visited homes and community centers to interview dozens of caregivers and residents, gathering data for a field study on the impact of power loss on public health. They also donated solar/battery nanogrid systems that can independently power electronic medical devices—prototypes of a more robust, sustainable, clean-energy infrastructure that could support public health in rural areas when power grids fail. 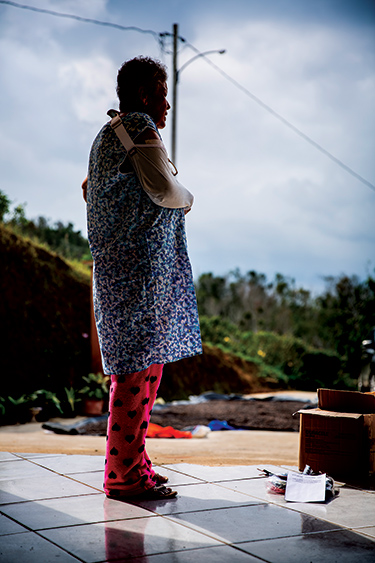 A woman watches as local volunteers and the UW team of students and faculty work outside her home.

The UW’s Clean Energy Institute and the Office of Global Affairs financed the project with help from the non-profit Clean Energy Group. The project aligns with the Population Health Initiative, a University-wide effort to eliminate health disparities across communities. Like many natural disasters, Hurricane Maria has disproportionally harmed those with the fewest resources: low- and fixed-income families, the elderly, the sick and people in rural areas.

The UW team hopes that the lessons from this natural disaster can help engineers design and develop better nanogrids—like the prototypes they’ve installed—which in turn will create a sound energy infrastructure that meets the needs of the most vulnerable members of each community.

The lack of such an energy infrastructure has left deeper scars than downed utility poles and darkened homes. “It is invisible suffering,” says Lilo Pozzo, the UW professor of chemical engineering who led the UW team on three trips to Jayuya, the first last November and the most recent in July. “You don’t know what the situation is until you go into homes and see exactly how people are getting by.”

The residents had repaired many overt signs of storm damage by clearing debris, boarding or replacing windows and fixing their roofs. Still, the blue tarps from FEMA are unsettlingly common. In their trips to Puerto Rico, the UW researchers have collected data on the health and wellbeing of many vulnerable individuals and families. In the process, they have documented the myriad “hidden” adjustments that residents of Jayuya have had to make. “It doesn’t take too much digging to see the ways people are adapting,” says Pozzo.

“You adapt because you have to. But you never achieve the normal life you had back when you had power.”

These adjustments include shifting their diets to canned and preserved food—which is not ideal because of the higher sodium content and lower nutritional value—or making long daily trips to a pharmacy or doctor’s office for medicine that requires refrigeration. “You adapt because you have to,” says Pozzo. “But you never achieve the normal life you had back when you had power.”

Pozzo chose Jayuya for this study because her spouse, Marvi Matos, a chemical engineer, grew up here. In the weeks after the hurricane, the couple, like many with family ties to Puerto Rico, collected supplies to ship to the island, where, even a month after Maria, millions were still without resources or power—barely 20 percent of the power grid had been restored. 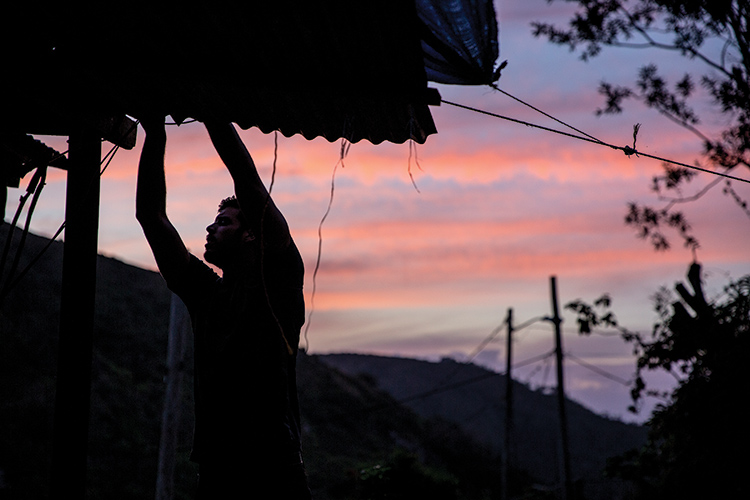 A student feeds wires from a solar cell into a house.

As weeks shifted to months, Pozzo and Matos started imagining how they could use their expertise as engineers to help and learn from the disaster. They found partners among Pozzo’s UW colleagues, recruiting experts from engineering, public health and the Graduate School to study the storm’s impact on health and energy infrastructure. They obtained campus funding for a public health study and raised private money to cover the costs for the solar/battery nanogrids that they could donate to households to power medical devices. Then they made contact with community organizers who worked directly with needy families.

“To me, this storm’s lasting impact is that it uncovered the vulnerable places of Jayuya,” says Maria Pérez, a municipal employee and community organizer. “It showed us the people in our midst who didn’t have help, who didn’t have aid, who were living in inhumane conditions.” 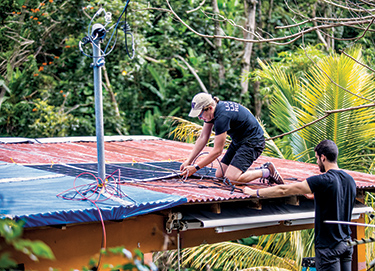 During their first trip, the UW team interviewed about two dozen families and donated four small solar/battery nanogrid systems to households and a community center to power medical devices.

Ahead of a second trip in March, the team expanded its nanogrid goals. Pozzo and her team assembled three types of solar/battery systems to generate different amounts of power. The smallest could run a mini-refrigerator used for storing medical supplies such as insulin. The largest could simultaneously power one or two more complex medical devices such as a feeding pump or electronic bed.

All three types of nanogrid systems work essentially the same way. Solar panels soak up the sun, delivering charge to a battery that can then power a medical device. Depending on the system, there may be additional equipment such as a power inverter to regulate power flow in and out of the battery. The systems needed to be as simple as possible for the patients and caregivers to use, says Ahumada.

Pozzo and Matos ordered most of the parts for the solar/battery systems before leaving Seattle and packed them in the team members’ luggage. Some components, like batteries, had to be purchased on the island. Solar panels for the medium nanogrids were ordered from a Puerto Rican firm. Team members then painstakingly assembled each system and repaired any damaged parts on site, since they didn’t have money for replacements. Each installation took several hours.

Community organizers like Heidy Gonzalez Perez guided team members through Jayuya. Before Maria, Gonzalez Perez worked as a tour guide. “A couple of days after the hurricane, I started walking around from door to door asking people what they needed,” she says. “I couldn’t just sit at home being depressed after an event like that. I had to get out and be active.” 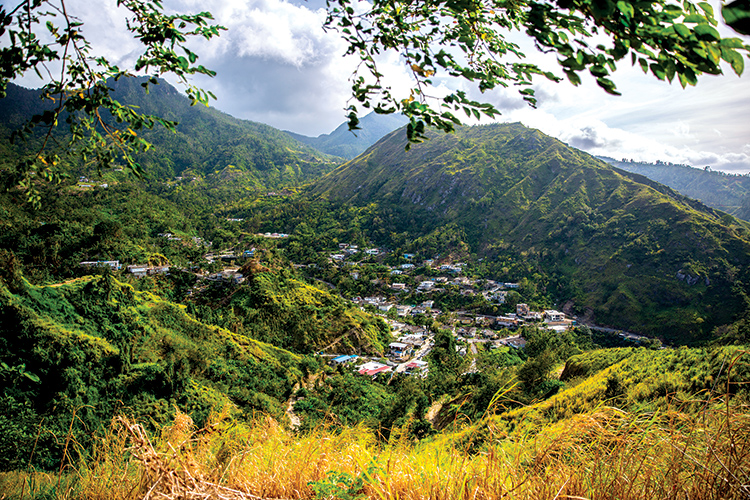 While a majority of Puerto Ricans now have electricity, residents of more rural areas, like this mountain village, waited 11 months.

The Jayuya government eventually hired her to help identify vulnerable households and distribute aid. Through that job, Gonzalez Perez discovered several homes where at least one family member needed to use an electronic medical device. This included a family living in a home with a view of Cerro Punta, Puerto Rico’s highest peak. There, two brothers, Jose and Orlando, told Pozzo about two bedridden relatives who live in the remote home. A third relative, suffering from sleep apnea and anxiety, used to live with them, but without treatment because of the power outage, he died of a heart attack about a week after Maria.

Their house hadn’t had power since Hurricane Irma, which hit two weeks before Maria. The team decided to donate a medium-size solar/battery nanogrid. Pozzo, Ahumada, Tatum, Raj and Chanaka Keerthisinghe, a postdoctoral researcher in electrical engineering, climbed to the roof to lay out a solar panel. This system will power one orthopedic bed and a refrigerator for food and medicine. The researchers also installed a data logger to record information about the nanogrid’s performance that the researchers can download on a subsequent visit. 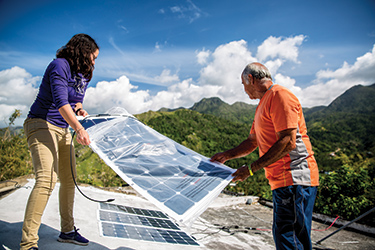 Mareldi Ahumada Parás (left) and a homeowner install solar panels that were purchased with money donated by individuals and the non-profit Clean Energy Group.

“We can combine the information that the data loggers record with information from the interviews to design even more effective nanogrids in the future,” Keerthisinghe says. “Our long-term success on this project ultimately depends on the number of units we can install and collect data from.”

“Doing this feels good,” says Keerthisinghe. “It’s a simple as that, and I definitely plan to stay involved.”

After installing their final nanogrid in Jayuya, the UW team travels along a valley road out of town. As they turn their thoughts to the research ahead and plan for their next trip to the island, they pass a boy playing in the yard of his darkened home. He’s wearing a Captain America costume and he salutes as they go by.