The Henry behind the Henry Art Gallery 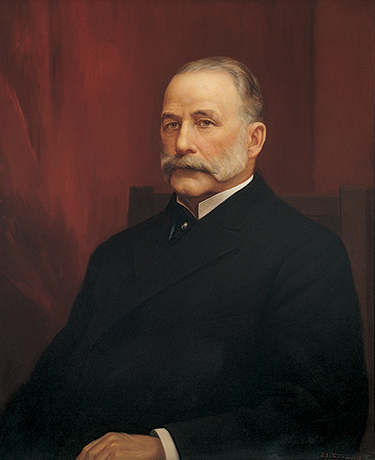 A portrait of Horace C. Henry by D. Litzenburg, circa 1925. Photo courtesy of Henry Art Gallery.

If Confederate soldiers had shot more accurately during Pickett’s Charge in the Battle of Gettysburg, the University of Washington might not be celebrating the 75th anniversary of the first public art museum in the state of Washington this year. In 1926 Seattle businessman Horace C. Henry gave 172 works of art to the UW-and enough money to build a museum to house them. A year later, the Henry Art Gallery opened to universal praise and three-quarters of a century later it remains a jewel in the state’s arts community.

To reach that point in Henry’s colorful life, he had to survive the Civil War, conquer tuberculosis, help prevent a bank run and build two great railroads over the Cascade Mountains. Not bad for the son of a well-to-do Vermont farmer.

Born in 1844 in North Bennington, Vt., Henry enlisted in the Union Army two months shy of his 18th birthday. Serving in the 2nd Vermont Brigade, his unit helped defend Union lines during Pickett’s desperate charge on the last day of the battle. His Civil War years made such an impression that at the age of 80, he could still recite the names of all 103 members of Company A.

Henry’s sharp memory and organizational ability would go far beyond the Grand Army of the Republic. After the war he attended both Williams and Hobart colleges, but never graduated due to a bout of tuberculosis. For a while he was able to conceal the disease by bribing a servant girl not to reveal the bloodstained bed linens. He even took up chewing tobacco to try to camouflage his illness.

Eventually he couldn’t keep it secret and his parents sent him to live with a cousin in Minnesota (then regarded as a healthy place for those suffering from “consumption”). Of that move, he often said, “They sent me out West to die-and I didn’t.”

The recovering lad joined his relative’s construction firm just as a post-war boom hit the railroad industry. Henry supervised the construction of many legendary Midwest rail lines, so it was natural to enlist his skills when the Northern Pacific arrived in the Pacific Northwest. In 1890 he arrived in Seattle to oversee the construction of a branch line, and liked the city so much that he moved his family from Minnesota.

In 1893 his firm built the Great Northern line from Stevens Pass to Everett and Seattle. His most famous—and lucrative—railroad project was a $20 million contract to build 450 miles of the Milwaukee Road from the Montana-Idaho border to Seattle, which was completed in 1909. Today Interstate 90 follows much of the same route over the Cascades and the rail beds are now used for hiking and biking trails.

Henry was a booster for the young city on Elliott Bay. When the financial panic of 1893 hit the banking industry, his partner in St. Paul insisted that Henry transfer the firm’s funds to Minnesota banks. But Henry knew that if he pulled out the local deposits, Seattle banks would fail, so he refused to make the transfer. His many civic activities included helping organize the Alaska Yukon Pacific Exposition of 1909, launching a savings and loan for the poor and funding the construction of the Firlands sanitorum for tuberculosis patients.

At that time many civic leaders felt that art could be a “civilizing force” in society. Inspired by railroad magnate James. B. Hill’s collection of French Barbizon paintings, Henry began purchasing French and American works in the 1890s, particularly landscapes. In 1917 he built a wing to his Capitol Hill mansion so that the public could see his collection.

By the 1920s Henry was nearing the end of his life and realized the collection needed a public viewing space. “He wanted his collection to remain unbroken,” says Judy Sourakli, the Henry Art Gallery’s curator of collections. “He wanted his paintings to be well cared for and appreciated by large numbers.” An admirer of then UW President Henry Suzzallo, in 1926 Henry wrote to offer almost his entire collection and enough funds to build a home for them on campus.

Among the gems offered was “An Adirondack Lake” by American artist Winslow Homer (pictured at top), which is now the most famous painting from Horace Henry’s collection. “It is a very significant Homer painting and often is loaned to other museums,” Sourakli says. Other noteworthy works include “Over the Hills and Far Away” by American Impressionist William Merritt Chase and “A Child at Bath” by French artist William Bouguereau.

On Feb. 27, 1927, these paintings and others were proudly displayed on the opening day of the new art gallery with Henry and Suzzallo leading the festivities. Said the author of a 1960 biography, “This was very probably the high point in his life, and he loved it.” It would be one of the last great moments of his life too. Sixteen months later, on June 28, 1928, Henry died at the age of 84.