One tray at a time, a Seattle dad helps erase school lunch debt around the state

Fueled by an appetite for social justice and funded by the likes of John Legend and the Seattle Seahawks, Jeffrey Lew, ’06, set out to end the stigma of school lunch debt.

When Jeffrey Lew's parents immigrated from China to Seattle in the 1970s, they didn’t have the time, or the means, for philanthropy. They were too busy trying to survive and establish a life for their son, an only child. “My parents worked countless hours to put food on the table,” Lew says. “To pay bills. To buy a house.”

Lew’s father cooked at Chinese restaurants all over the Seattle area before retiring. His mother works as a seamstress. “I wasn’t one of the kids who got everything they wanted,” Lew recalls. But he didn’t lack for the basics. Housing. Clothes. Food. And he never worried whether he’d be able to buy lunch at school. “I always had lunch money,” he says. “I was very fortunate.”

A generation removed from the struggles of immigrating, Lew—a 2006 graduate of the Foster School of Business—enjoys a foundation his parents didn’t have in America. So he is dedicating his efforts to fighting for the kids and families who can’t afford to buy lunch at school. Over the past year, Lew has raised tens of thousands of dollars to pay off school lunch debts across the state of Washington. His GoFundMe campaigns have not only attracted a cornucopia of donors but widespread acclaim as well. Singer-songwriter John Legend, the Seattle Seahawks and a host of others have donated to Lew’s campaigns. CNN, NBC Nightly News, the Today Show and other media outlets have interviewed Lew.

His initiative has touched a nerve, inspiring others to jump in and raise money for their schools while at the same time bringing awareness to a phenomenon called “lunch shaming,” the practice of withholding hot lunch or giving a replacement lunch or somehow marking a child who doesn’t have the money to pay for school lunch.

Yet behind all the acclaim is a perfectly normal father of three who admits that before all of this, he wasn’t exactly brimming with confidence. Even after all the interviews, the Seattle resident struggles to articulate exactly what motivated his sudden dive into philanthropy. Then it hits him: he wants to leave a legacy for his children.

“I wanted to show my kids that if you see something that is not right, or you want to fight for something, you can always try,” Lew says. “Fight for what’s right. You don’t know if you’re going to be successful unless you actually try.” Put another way, he wants to do for his children what his parents did for him. “When my kids are older and look back, I want them to say, ‘Wow, look what my dad did,’” he says.

“It’s crazy to see such a small idea taking off. I feel like I’m just an ordinary guy. But everyone is like, ‘You’re that lunch guy.’” 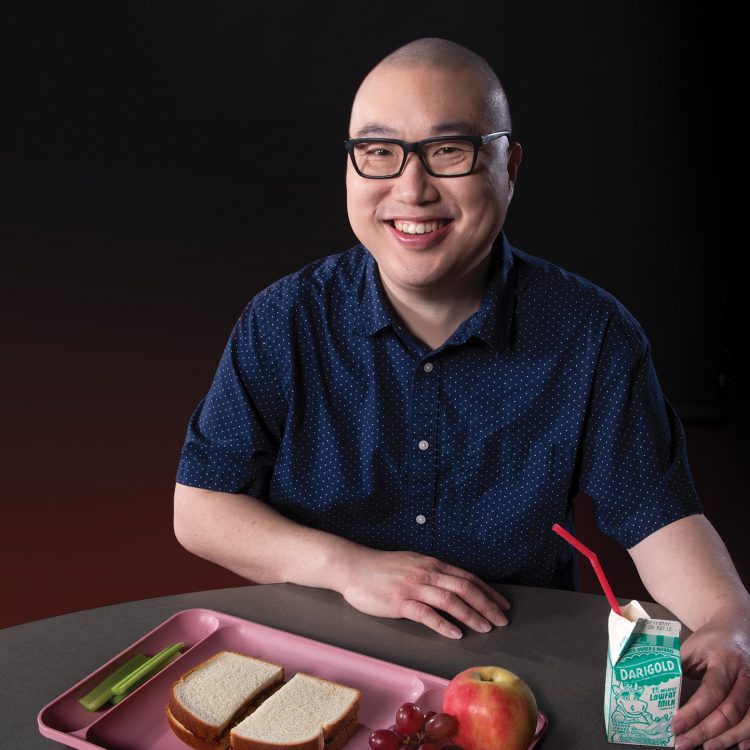 According to a 2014 Department of Agriculture report, roughly half of all school districts nationwide withheld hot lunch from students who couldn’t pay. Often, those districts would provide an alternate meal, like a sandwich. But some districts went so far as to mark students’ hands with stamps or other signifiers to remind their parents to send money. Currently, roughly 75 percent of all schools have children with outstanding lunch debts, according to the School Nutrition Association.

Lunch shaming gained notoriety this spring after a series of articles appeared in national and local media outlets. Around that time, Lew stumbled on a CNN Money article that described the practice. Horrified, he called up his son’s Seattle school. While he was relieved to learn the school didn’t lunch-shame in any way, it did have outstanding lunch debt. The total? $100. That got Lew moving. “The word debt and children should not go together,” Lew says. “Because they’re kids. Their job is to focus and study.”

He started a GoFundMe effort and within a few days, he raised $100. That success inspired him to aim higher—he then wanted to know how much school lunch debt existed in Seattle Public Schools, the state’s largest district. It wasn’t long before he raised $50,000 to pay off the district’s outstanding debts. High-profile donations brought in more publicity, and that got Lew thinking even bigger. In short order, he paid off lunch debts for school districts in Tacoma, Renton and Spokane. City officials in Spokane were so appreciative that they honored Lew with an official salutation for raising more than $4,000.

Six-year-old Amiah Van Hill first heard about Lew in May. That’s when her mother, Rachel, read her a news story about Lew’s GoFundMe campaign. Amiah wanted to help, so she called her school in Hayden, Idaho, and asked what its lunch debt was. The answer: $40. Over the summer, Amiah started a lemonade stand near her home. Within an hour, she’d raised more than $40. From there, her homegrown effort took off. After pulling in more than $300 selling lemonade, she opened her own GoFundMe campaign to pay off the lunch debt of every school in nearby Coeur d’Alene. As of early October, that campaign had raised more than $13,000.

Although Lew and Amiah have never met, Rachel Van Hill says Lew inspired Amiah’s every move. “I want him to know that he inspired Amiah,” she says. “Without him, and what he’s done, we wouldn’t have been able to do what Amiah is doing on her end.” Lew sends Amiah messages nearly every week to encourage and support her efforts. “It’s crazy to see such a small idea taking off,” Lew says. “I feel like I’m just an ordinary guy. But everyone is like, ‘You’re that lunch guy.'”

Another person Lew inspired is Erik Anderson, founder and CEO of WestRiver Group, an investment firm in Kirkland, and executive chairman of Topgolf, an international sports entertainment company. He wanted to get involved. “I had a real diverse, small class growing up,” says Anderson, who was raised in Spokane, moved to the west side of the state but serves on the board of Avista, the power company that services the Spokane region. “There were clearly kids who had more or less resources, so I developed some empathy.” He donated $3,525 to the Seattle campaign, $2,500 to Tacoma, $2,500 to Renton, and $1,503 to the Spokane campaign. “Sometimes things should just get better right away,” Anderson says.

Now, Lew is aiming even higher. He wants to raise money to pay off the lunch debt for every school district in the state—more than 315 in all. As of the beginning of October, he’d raised nearly $32,000 of his audacious $650,000 goal. But even Lew, who spends several hours every night fundraising, knows full well that the money won’t address the underlying causes. “It’s a temporary solution to pay off these lunch debts as we go along,” says Lew, who assists low-income families in his day job. “It’s like a Band-Aid, and Band-Aids come off.”

At the end of the day, Lew remains focused on inspiring his own children and continuing the legacy of his parents. Just the other day, Lew says, his son’s lunch lady told him, “Wow, you have a cool dad.”

Eli Francovich and Daniel Berman are freelancers for Columns Magazine.