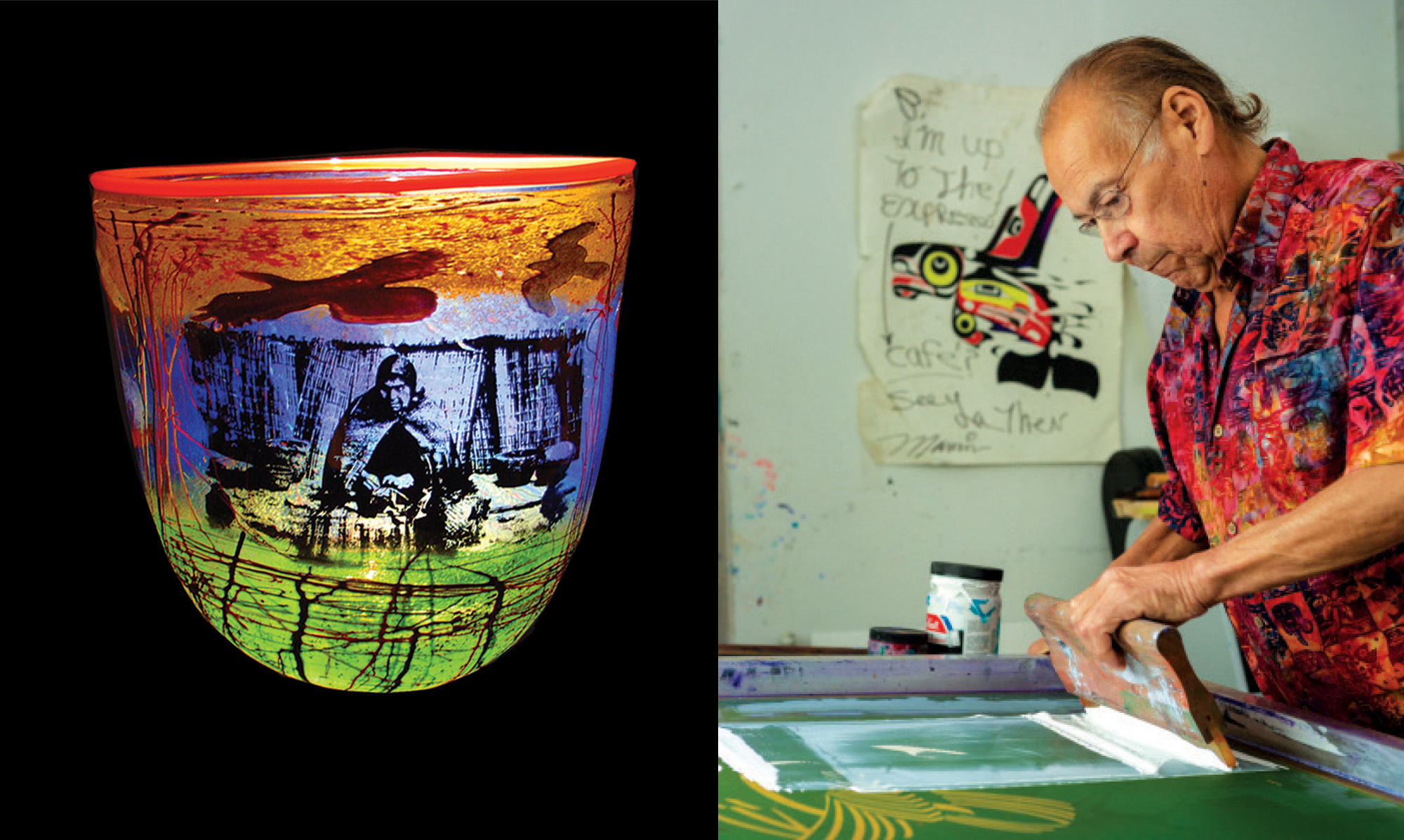 The many dimensions of Marvin Oliver

Oliver, a professor emeritus and one of the biggest names in Northwest art, is the recipient of the 2019 Odegaard Award.

By Hannelore Sudermann | Viewpoint Magazine | May 2019

In the mid-1970s, Marvin Oliver, ’73, was a new instructor at the UW, teaching art and Indian Studies. The Quinault/Isleta Pueblo Native American was also spreading his wings as an artist, blending his training in fine arts, history and anthropology into insightful and original works on paper.

One spring, he decided to do something special for the American Indian and Alaska Native students he had watched overcome hardship to earn their degrees. There were so few of them and they had worked so hard, “I wanted to acknowledge their success,” he says.

He reached out to Bernie Whitebear, a friend and co-founder of the new Daybreak Star Indian Cultural Center. Native American activism and the 1970 occupation of Fort Lawton to reclaim the federal land for all tribes led to a center for Seattle’s Native community. Oliver thought it the perfect home for a celebration of the students where he would surprise each graduate with a print he had made featuring the traditional style of Northwest Coast Native American art.

“That first year six students and about 20 people showed up,” says Oliver. “That was it. It was fun.” So fun, they did it again the next year. And then again. Now the event, which Oliver has named Raven’s Feast, takes place every spring. As many as 500 people come including students completing their master’s degrees and those on their way to being doctors and lawyers. There’s a feast. And, as is Oliver’s tradition, each new graduate receives a print.

What started as a simple acknowledgment has taken on a life that even someone as imaginative as Oliver couldn’t have dreamed.

Today Oliver, a professor emeritus, is one of the biggest names in Northwest art. He is a culture-bearer, a carver, sculptor and printmaker, and his works adorn buildings and parks around the world. He has a totem pole in Tokushima, Japan and a 30-foot bronze orca fin titled “Sister Orca” in Perugia, Italy.  Another of his totem poles towers over Pike Place Market, and his carved and painted red cedar Raven Doors hang at the National Museum of the American Indian in Washington, D.C.

Oliver is an innovator, blending Native craft and history with fine-art sensibility. At the same time he is a beloved teacher, gallery owner and adviser to other artists.

“My folks would call someone like Marv butter on a hot skillet,” says Tony Johnson, chairman of the Chinook Tribe, a carver and former student of Oliver’s. “He has so many things going on at any one time. And he sees them through to fruition.

“He is an amazing combination of a dreamer and a realist who manages to get really significant projects done. Also, he is so much fun to be around and so inspiring because of his ability to dream so big. He can’t help but compel you.”

Was there ever a time that Marvin Oliver wasn’t an artist? “I think you’re born being an artist,” Oliver says from his perch on the couch of his Wallingford home one afternoon this winter. “It’s always in your blood.”

Both his parents were teachers. His mother, Georgia Abeita, an Isleta Pueblo Indian, made art and shared her culture with her children. Growing up, the Oliver children spent summers visiting Georgia’s family in pueblos outside Albuquerque.

His father Emmett Oliver, ’47, a Quinault Indian born in Washington, left for school in California and New Mexico. After serving in the U.S. Coast Guard in World War II, he returned to Washington to complete a master’s in education at the UW. Throughout his professional life, the senior Oliver focused on bringing people together around the cause of improving the lives of Native Americans. He was the first supervisor for the American Indian/Alaska Native division of the Office of Minority Affairs at the UW, and director of Indian Student Education for the state of Washington. In 1989, he organized the Canoe Paddle to Seattle, which has evolved into an annual tribal canoe journey with over 100 canoes and 10,000 participants.

Marvin Oliver was born in Shelton, Wash., and grew up in the Bay Area. When he enrolled at San Francisco State University, he thought he would turn his penchant for drafting and art into a career in architecture. But a faculty member pushed for him to be admitted to the prestigious art program. There, Oliver encountered teachers like photorealist Robert Bechtle, famous for his residential landscapes and snapshot aesthetic. “That was just amazing,” Oliver says. “Some of the best professors in the country were there.”

Oliver also took an elective in Native American studies and for the first time encountered urban Indian classmates. In the wake of the federal Indian Relocation Act, they were focused on preserving and recovering their cultures, organizing across tribal lines for civil rights and self-determination, he says.

That started to shape his own perspective, and visits to Alcatraz Island during a 19-month Native American occupation helped cement it. By the time Oliver was in college, his father was chairman of the Bay Area Native American Committee, the group that led the takeover of Alcatraz in 1969. The effort to reclaim the abandoned federal prison as Native land drew attention to the plight of Native Americans throughout the country. “I was young and other Native students were there,” Oliver says. “They were activists dreaming of making changes.

“I started to think about what’s my contribution to this event,” he says. “I told my dad that I was going back to school and I would graduate. Now I had a purpose.”

He finished his bachelor’s degree in 1970 and moved to Seattle to explore his own Northwest Native American background. At the UW he sought out anthropologist Erna Gunther, who had an expertise in coastal tribes, and art historian Bill Holm.

By the time he met Oliver, Holm, ’49, ’51, had recently published a book on Northwest Coastal art, was lecturing in art history and anthropology and serving as a curator at the Burke Museum. Holm recalls that Oliver quickly became interested in traditional Native art. Taking in the fundamentals of a 2,000-year-old approach that Holm had dubbed “formline” design, Oliver learned to render the ovoids, curving lines, the thick and thin elements and soon mastered the form in drawing and carving.

“I took all Bill’s classes,” says Oliver. “He gave me a foundation.” The young artist also studied painting with Professor Jacob Lawrence, the African-American artist famous for his vibrant depictions of Black culture and history. “I loved him,” says Oliver. “When you meet such a wonderful man like that, you want to work. You want to create. I would think, I want to do this and I want to share it with him.”

The course of study inspired him to teach other Native students and artists. In 1973, he completed his Master of Fine Arts, and within a year was leading classes at the UW.

He also found friends to help him produce his own art, people like Paul Nicholson at the poster shop at the HUB where Oliver would sneak in nights and weekends to make prints. His serigraphs abounded, pushing from the traditional colors of red, black and turquoise and into purples and greens, rendering animals in both formline style and a more realistic illustration style, embossing designs on the plain paper near the print. “I can’t leave the paper alone,” Oliver says. “I really like to push it.”

He also carved wood panels for Daybreak Star and was soon crafting large pieces for libraries, schools and parks. “I really enjoy creating public art,” he says. “The piece that is most dear to my heart is the mother and child that was commissioned for the Children’s Hospital.”

The larger-than-life masterwork, completed in 2006 and titled “Mystical Journey,” floats at the top of a three-story atrium in the Seattle hospital. The 26-foot-long fused glass and steel Orca mother and baby was a demanding project, and some worried that the 12,000-pound sculpture was too ambitious. “It took us a year and a half to build it,” Oliver says. “But my approach to art like that is to have no fear.”

While he has so many ideas, dreams and projects, it’s Oliver’s family that fastens him to the here and now. In the late 1980s, Brigette Ellis, ’86, an anthropology graduate from Ketchikan, asked if she could sell Oliver’s prints in her hometown. That led to the Alaska Eagle Arts gallery and a partnership that evolved into marriage and family. Owen, their oldest, now attends the UW. Twins Izzy and Sampson are school-aged and often come along on Oliver’s installations and visits to regional events.

Last summer at the end of the tribal canoe journey, Tony Johnson listened happily as his mentor held a tableful of people in thrall long after the tent had emptied out. “It was so much fun to sit and listen to Marv spill out his philosophy to the members of our canoe family, his motivation, his compulsions toward art,” Johnson says. “He shared his story of his connection with Alcatraz and why he holds the Raven’s Feast. We’re still talking about it months later.”

Today, more than 40 years since the first Raven’s Feast, the celebration has moved to the wǝɫǝbʔaltxʷ – Intellectual House on campus. And for many, the gift of a print is no longer a surprise, but a goal.  “Kids have sat looking at their aunt or their mom’s print hanging on the wall, and they felt they wanted that, too,” says Johnson. “It actually got them up and to college to get that token of graduation. I guarantee that those prints have more life than the actual diploma.”

Professor Emeritus Marvin Oliver, ’73, is this year’s recipient of the Charles E. Odegaard Award. The recognition was established in 1973 to honor those whose leadership in the community continues the legacy of President Odegaard’s work on behalf of diversity and equity at the University and throughout the state. It is regarded as the highest achievement in diversity at the University.

The award will be presented at the 49th annual Celebration hosted by Office of Minority Affairs & Diversity and the Friends of the Educational Opportunity Program on May 15, at the Husky Union Building on the UW Seattle campus. Learn more.</a