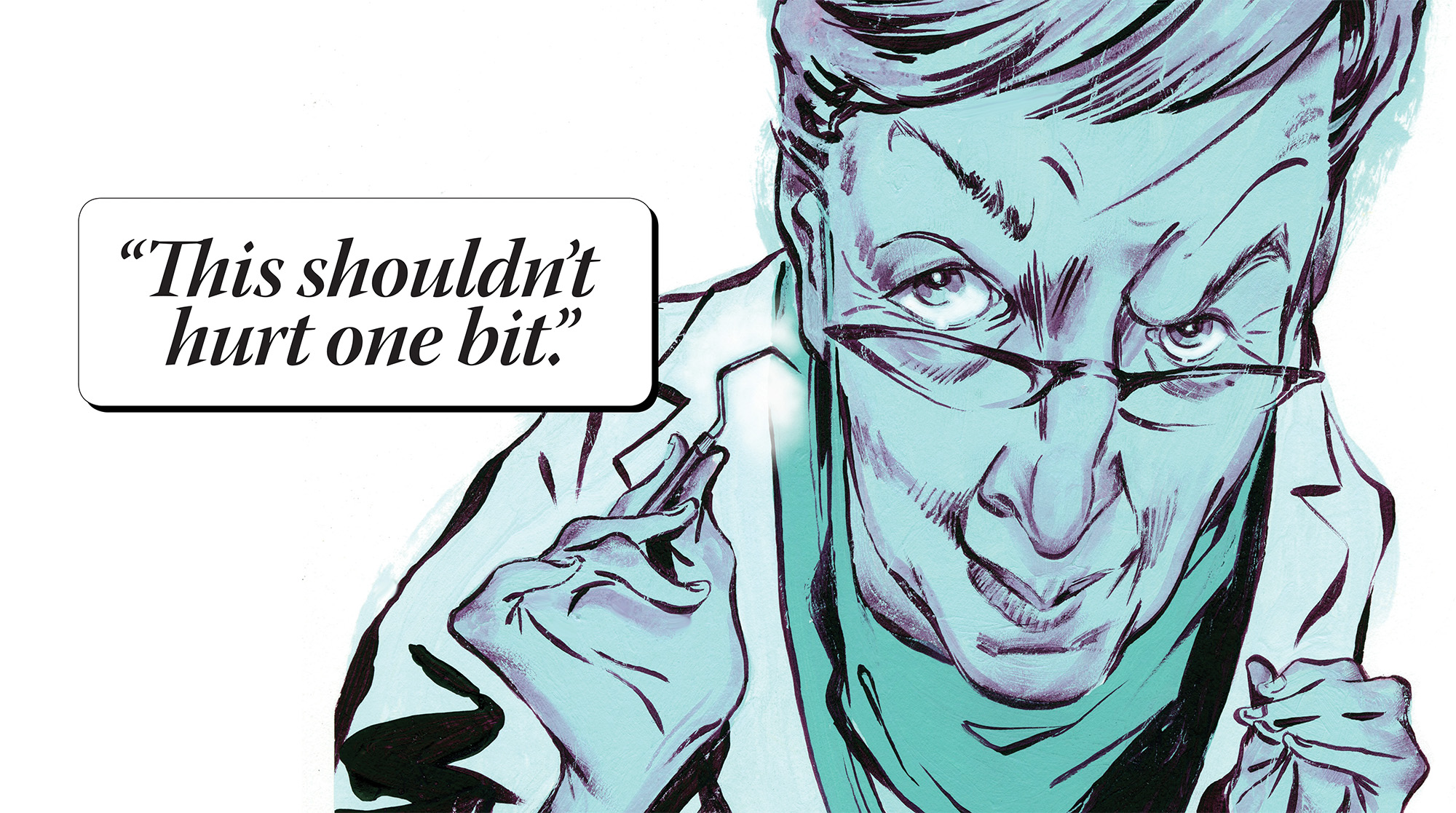 The new age of dentistry

Going to the dentist has never been as unpleasant as it’s often made out to be. But new technology and a new teaching philosophy is about to dispel that myth for good. Say ahhh.

Hailey Turner reclines in a dentist’s chair, her mouth and eyes open wide. With a steady hand, Yen-Wei Chen, ’08, assistant professor of restorative dentistry, waves a wand across his young patient’s mouth, the penlike instrument tracing the lines of Hailey’s teeth and gums without ever touching them.

To Hailey, a bashful 14-year-old with silky brown hair, the wand is like magic. In reality, it is an intra-oral optical scanner capable of recording thousands of images per second. Behind Hailey’s head, a computer monitor displays the pictures, which have been stitched together electronically into a high-resolution 3-D map of Hailey’s mouth. It shows every detail of every one of her teeth—of which there are too few.

Hailey has ectodermal dysplasia, a genetic disorder that stunted her dental development—and arrested her self-confidence. She has only six adult teeth——two incisors in front and four molars in back—in addition to several baby teeth that stubbornly have held on. The intra-oral scan initiates a rapid process for creating a set of cosmetically pleasing artificial upper teeth for Hailey. Similar to a denture without gums, the dental appliance will snap snugly into place over her existing teeth, the scanning device having tracked precise paths of insertion. Chen uses the computer like an Etch A Sketch as Hailey and her mother dictate aesthetics. Hailey requests her new teeth be whiter, too.

“Before, you had to design restorations by hand at a lab,” Chen says. “Now, the dentist is designing and the software auto-assists. It’s like a computer game.”

The digital impressions taken of Hailey’s uppers, lowers and bite took all of three minutes to scan optically. Chen then sends the image files electronically to a lab in Renton, where they are plugged into a software program that mills a block of material into what will become Hailey’s new teeth. With staining, coloring and glazing, the entire process will take about an hour. A courier then will deliver the prosthetic to the UW Dental Clinic. With traffic, that could take another hour. From physical impression to hand-fabrication to fitting, that process used to take about a week and require as many as six different office visits to get everything right. Now it all can be done in a single day, and the patient’s time in the chair is spent much more comfortably.

While the lab mills the new appliance, Hailey, her mother and little sister grab some lunch and explore the University District with plans to return later that afternoon for her final fitting. Staggering advancements in science and technology like those helping Hailey are also rapidly changing dentistry. And that means methods for teaching and training future dentists must keep pace. This fall, the UW School of Dentistry is starting its second year of a new curriculum built around shaping the “Dentist of the Future.” In addition to training students in the modern techniques of dentistry, the new curriculum also pays heed to a revolution taking place in the management of dental practices, with the UW being the first school in the country to devote four years of instruction to the business side of the profession.

Physical-impression molds could become obsolete. No more nasty goop. No more icky taste. Also gone will be the fuss of a temporary crown.

The school recognizes that dentists no longer can focus solely on “drill and fill.” At some point in the not-so-distant future, digital impressions will be used not only in extreme cases like Hailey’s but also for making routine crowns and bridges. “I predict it will become the standard in two years,” says Joel Berg, dean of the School of Dentistry. Physical-impression molds could become obsolete. No more nasty goop. No more icky taste. No more gagging. Also gone will be the fuss of a temporary crown, as well as the requisite return visit to get fitted with the permanent crown.

UW dental students currently are being taught both physical- and digital-impression techniques as the school straddles the line between a past that isn’t so long ago and a future that isn’t so far away. Chen recalls how the first intra-oral scanner he used seemed like something straight out of “Star Wars.” While that scanner was as big as a golf club, the tool he uses today is barely bigger than a Sharpie.

With novel techniques and equipment becoming passé after just a few years, the new curriculum is, at its core, an exercise in keeping UW at the vanguard of dental education. “We discuss ‘Dentist of the Future’ as it relates to our responsibility to serve the ‘Patient of the Future,’” Berg explains. “We designed the curriculum to have our graduates do well in responding to the changing needs of the patient.”

As they become increasingly informed about dental health, patients of the 21st century are expecting more from their dentists. Influenced by modern science and patient interests, the revised curriculum weighs heavily toward prevention. New detection tools are allowing dentists to treat early stages of tooth decay, not just cavities. For example, the U.S. Food and Drug Administration in 2014 approved the use of silver diamine fluoride, a drug applied topically to kill the bacteria that eats away at a tooth. Considered effective at preventing cavities, the treatment already is popular among parents who want to spare their children the dreaded dental drill. Soon after the drug was released to the market, Berg, who practices pediatric dentistry, got calls from eager parents asking: “Can you treat my child with this?”

In developing the new dental school curriculum, Berg brought in a consultant from the University of Pennsylvania’s Wharton School of Business who specializes in marketplace trends. The consultant’s advice? Teach for the future. So the UW did.

One area of the new curriculum prepares students for the ever-shifting business side of dentistry. Lessons begin in the first year with a weekly lecture organized like a talk show and cleverly dubbed “Tuesday Morning Live.” Inside a Health Sciences classroom last spring, Berg moderated a panel on the divergent forms of dental practice. Sitting on the right: Victor Barry, a dentist who runs a small practice on Seattle’s Capitol Hill with one other partner and two associates. The gray-haired former president of the Washington State Dental Association wore a blazer, open-collar dress shirt and loafers. On the left: Tyler Shoemaker, CEO and chief dental officer of Smiles Dental Group, a dental service organization (DSO) with 25 practices throughout Washington, Oregon and Alaska. A certified public accountant, he sported a track-suit jacket, sweatpants and running shoes.

Consolidation into large group practice is a trend of the dental industry. In spite of critics who admonish the model as excessively corporate, as many as half of today’s dental-school graduates are likely to work within a DSO for at least five years of their career.

“Being a dentist has gotten very complicated,” Shoemaker told the 75 students, who soaked up every word. “Our organization helps take that stress away by providing you resources that allow you to do your job better.” Barry, however, advised caution: “Not all DSOs are accountable. You need to do your due diligence. Talk to your colleagues who have worked in that setting.” The teaching of practice management typically is tacked onto the tail end of dental education, an awkward afterthought imparted to students as they prepare to graduate and enter the real world. UW is the first dental school in the country to offer such an extensive and embedded practice management curriculum, Berg says.

Stephanie Campbell, a first-year dental student from Montana, appreciates that: “When I was applying to dental schools, I specifically looked at which schools offered a business aspect to their curriculum. Dentistry is a split between health care and business. For me, that’s one of its attractions.”

The new curriculum has also ushered in a new system of third-year clerkships and a fourth-year, general-practice model designed to duplicate the real world of private practice.

For Hailey, her mom and sister, time on the “Ave” passes quickly. It is now afternoon and Hailey has returned for her final fitting. Chen pauses to reflect on the first time Hailey saw herself with her new upper teeth in place. “I saw a tear roll down her eye,” he says. Hailey wasn’t uncomfortable; she was overcome with emotion. “Hailey smiles a lot more now,” her mom confirms.

Both can attest to the change in Hailey because this is her second visit to see Chen. Hailey is getting a replacement for the dental appliance Chen made for her months earlier—but is no longer usable.

As magical as modern dentistry has become, the future is not foolproof. Hailey’s original appliance broke into three pieces in time-honored fashion when the family dog, Cookie, tried to eat it.