The new dawn of dialysis begins at UW

The birthplace of home dialysis unveils the next thing in fighting kidney failure.

Jim and Eleanor Church’s Snohomish bedroom looks like the back room of a shoe store. Neatly stacked against one of the walls in their tidy 1990s rambler are dozens and dozens of brown boxes. But they don’t contain running shoes or high heels; instead, they hold gallons of peritoneal dialysis fluid that help remove waste products from Jim’s blood during home dialysis because his kidneys aren’t working very well. Jim is in good company.

At the end of 2011, more than 625,000 people were being treated for end-stage kidney disease in the U.S, according to the United States Renal Data System. Jim has been on dialysis of one kind or another for three years. The treatment of end-stage renal disease has been marked by a lack of progress. People with the condition have a relatively poor quality of life and a high mortality rate. The same options, peritoneal dialysis and hemodialysis, have been available for years.

Innovation has been a long time coming in kidney dialysis—until now. At the UW, the birthplace of kidney dialysis, a clinical trial has been approved to test the safety and effectiveness of a wearable artificial kidney (WAK). Not counting preliminary studies, it is the first human trial of its kind in the United States. It is also the first human trial to win approval from the Food and Drug Administration (FDA)—and it will feature the longest use of the WAK.

The prototype for the wearable artificial kidney is familiar; it looks like a tool belt from a big-box hardware store. It is battery-powered, weighs about 10 pounds, can dialyze patients continually while allowing mobility, and it only takes a pint of fluid to work. Researchers are hoping the continuous dialysis the device provides will improve the quality of life for kidney patients and keep them healthier. They are also hoping the continuous process will help patients avoid dietary restrictions.

No matter what kind of dialysis people choose—treatment at a center or home dialysis—their life is restricted. The dialysis schedule dictates how they live, their activities and even when and if they can work. In many ways, Jim Church is a typical dialysis patient. He was diagnosed 20 years ago at age 59 with Type 2 diabetes. “I was surprised. I shouldn’t have been because my mother was a Type 2 diabetic. I was overweight and I also had high blood pressure,” he says in his soft Texas accent. (Both he and Eleanor grew up in Beaumont, Texas.) This is the common path to Type 2 diabetes: being overweight, developing diabetes and then, after some years, the kidneys begin to fail.

He knew three years ago that something had to give. He and his wife had tickets to the Seattle Men’s Chorus holiday program. “I told Eleanor I couldn’t go because I was so tired, I couldn’t get from the parking garage to the concert. Very shortly after that, I started dialysis.”

Like many patients, he started off by going to a dialysis center. By the time he drove to and from the center, got hooked and unhooked from the machine, and then spent four hours dialyzing, it took a six-hour bite from his schedule three days a week. 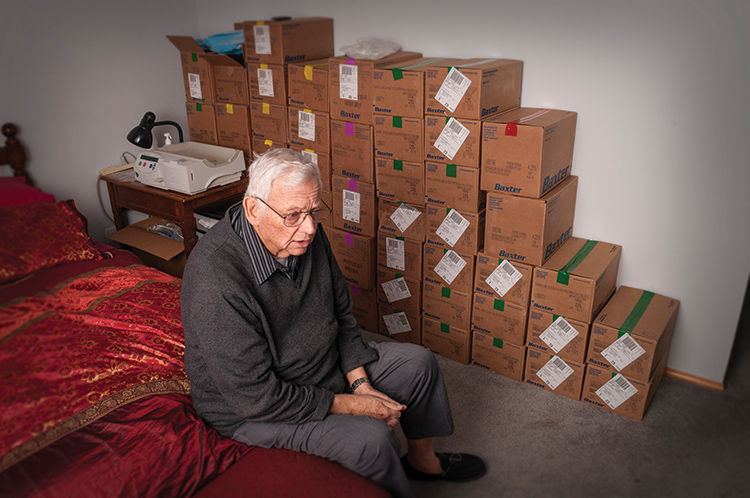 Dialysis patient Jim Church stores boxes of peritoneal dialysis fluid in his home so he can undergo home dialysis for 11 hours a day.Photo by Karen Orders

“It was a hassle,” he says. “Then I started home dialysis.” During home dialysis, he has had several infections. Because the fluid drains unusually slowly from his body, Church has to dialyze for 11 hours each day. Once he starts the process, he’s confined to his bedroom where the dialysis machine sits next to his bed. If he has a Rotary meeting at 7 a.m., he has to start dialyzing by 7 p.m. the night before.

“When your body doesn’t work the way it’s supposed to, it has a significant effect on your activities,” says Eleanor. “The whole family is living with a chronic illness. He had peritonitis with peritoneal dialysis, but with hemodialysis, the blood pressure can plummet,” she says.

The WAK project was one of three proposals, out of 32 applications, chosen by the FDA to participate in its Innovation Pathway program. The FDA designed the Innovation Pathway to help safe, breakthrough medical products reach patients faster. The End-Stage Renal Disease Challenge, issued in 2012, focused specifically on innovative devices that address kidney failure, which is a growing public health care concern in the United States.

The WAK has been in development for more than a decade. Victor Gura, a physician specializing in internal medicine and kidney disease, created the initial WAK prototype in his Beverly Hills clinic. Gura originated the project at Cedars-Sinai Medical Center in Los Angeles and the David Geffen School of Medicine at UCLA. It has evolved to include the Kidney Research Institute, a collaboration between UW Medicine and Northwest Kidney Centers, as well as the Department of Health Services in the UW School of Public Health. Jonathan Himmelfarb, professor in the School of Medicine, and Larry Kessler, professor and chair of Health Services in the School of Public Health, are leading the study at the UW.

In the study at the UW, researchers will test up to 10 patients who will be monitored closely as they use the WAK for 24 hours at UW Medical Center. Then, the patients will be monitored for 28 days to see if the device is safe and effective. The FDA and the UW Institutional Review Board, which protects the interests of patients who are subjects in a trial, have approved the selection criteria.

Gura indicated that the collaboration with Kessler and Himmelfarb, one of the premier kidney researchers in the U.S., has been key in achieving the support of the FDA for the project as they bring a wealth of regulatory and research capabilities to the initiative. Gura adds that further trials will be conducted in several academic centers.

“Quality of life issues will likely be embedded in the trial design,” Himmelfarb says. “We’ll probably be asking patients, ‘Can you move with ease? How do you feel? How does the device or the treatment affect your daily life? Can you go to work with it on or go out with your family and friends?’ We will be looking at key health outcomes as well as health economics. At present, if you want to attend your cousin’s wedding in New York City, you need to check to be sure time slots are available at a center for you to get your dialysis done. You can’t just walk in,” says Himmelfarb. “If you live in a rural area, you probably drive a long distance every week for your dialysis sessions. A safe, effective, wearable artificial kidney would give end-stage kidney disease patients much more freedom in their lives.” Jim Church says that with proper planning he could have dialysis fluid delivered in Paris. “But, you are always thinking ‘what if it misses the flight and my stuff lands in Istanbul?’ With an artificial kidney you would be free from all of that,” he says.

Kessler says it’s important for people to realize that the WAK will not be for everyone. If a patient on dialysis was too frail he or she would not be a good candidate. Church is applying to be a candidate. Future trials are likely to involve multiple medical centers with patients spending more time away from medical facilities. Kessler says the next two big steps in engineering are to make the device lighter and more efficient.

It is fitting that the clinical trial of the latest innovation in end-stage renal treatment is taking place at the UW. In March 1960, the first shunt was implanted into the arm of machinist Clyde Shields and kidney dialysis successfully began. Belding Scribner, professor in the UW School of Medicine, developed the idea for U-shaped arteriovenous tubes that allowed blood to circulate from the patient’s body into a dialysis machine for cleansing of toxins. Tom McCormick, senior lecturer emeritus of bioethics, remembers Scribner telling him about the process. 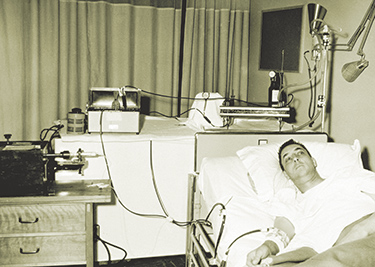 Dialysis in the early days required yards of tubing and a rotating drum the size of a washing machine.

“He had several young men with chronic kidney failure and all he could do was send them home to die. He went home and awakened in the middle of the night. He thought that if a patient had chronic failure they could send the blood through the kidney machine through the artery and the vein. The next morning, he took a drawing to work and the process started. I believe both he and Wayne Quinton experimented together bending Teflon tubing over a Bunsen burner, then plunging it into cold water so that it would hold its new shape.” Wayne Quinton was a truly imaginative engineer who ran the hospital’s Medical Instrument Shop. Quinton was experienced with Teflon and it was his skill that made the shunt workable. Once installed, the Scribner shunt allowed the treating team access to the blood supply at any time so that ongoing dialysis could be achieved.

David Dellinger, a UW surgeon, performed the procedure on March 9, 1960 as soon as the shunt was available. The original dialysis machine was as big as a washing machine. “Scribner told me he estimated there were 50,000 people who needed dialysis,” recalls McCormick. Thanks to dialysis, Shields went on to live another 11 years. The early work in dialysis by these medical innovators is considered to have kickstarted the modern era of medical bioethics.

Along with the new ability to dialyze patients came difficult ethical questions. For every four patients who needed dialysis, there was the capacity to treat one. The other three patients would die. A committee selected by the King County Medical Society worked anonymously and without pay to choose who would and wouldn’t receive dialysis. A dire situation drove the next innovation: The Committee denied treatment to a 16-year-old high school girl. Professor Albert Babb, UW professor of engineering, assembled a team of colleagues who worked on a portable dialysis machine called the Mini-1. It was delivered to UW Medical Center June 1, 1964 and thus the first portable dialysis unit was born. In 1972 the U.S. Congress voted to make dialysis a Medicare-eligible treatment.

Today the legacy of innovation in kidney care continues with the clinical trial of the wearable artificial kidney. If it’s safe and effective, it will doubtless have several iterations, making it smaller and easier to wear. Jim Church says he may not live to wear one, but he’s glad the UW is helping bring this possibility to the fore for the hundreds of thousands of patients whose lives are now restricted by current dialysis options.