The UW’s batwoman is a hero to her favorite mammal

Forget the silly myths about vampires. Sharlene Santana discovered that the role of bats in the environment is underrated. And most don't want to bite you.

Batwoman may be just a comic-book character, but at the UW we have our very own. Her name is Sharlene Santana, and you will find her in an unusually tidy office in Kincaid Hall, dressed normally (i.e., no bat suits). That’s when she isn’t jetting off to Costa Rica, Grenada or a steamy jungle to conduct research on some of the 1,300 species of bat that exist worldwide. And when she isn’t out in the wild, Santana can be found at the Burke Museum of Natural History and Culture, where she serves as curator of mammals. “People ask me what my favorite mammal is and I guess I should say my husband, but really, it’s bats,” she jokes.

Entering Santana’s office on a bright, summer day, a visitor is struck first by a glass-covered display of strikingly large insects mounted on the wall. Collecting insects is a byproduct of studying bats, because that’s what many feed on. Her office desk also features a few 3-D printed bats. On this June day, Santana, who’s wearing a carved necklace of tiny bats that she picked up at a meeting of the North American Society for Bat Research, points out a shelf in the corner of her lab. It contains about 15 jars full of—you guessed it—pickled bats.

How did this assistant professor of biology become so obsessed with bats? As a young girl growing up in Venezuela, she spent a lot of time outside at her grandmother’s house on the country’s eastern coast. There, she occasionally saw bats flying at night, feeding on her grandmother’s fruit trees. She was so enraptured that she decided to study the creatures, first as an undergraduate at Licenciatura en Biología, Universidad de Los Andes, Venezuela. That got her hooked. Ever since, bats have become her life’s passion. At the Burke, she endeavors to pass on her love for these odd, scary-looking, flying mammals to tours of schoolchildren. At the museum’s Meet the Mammals Day, slated for Nov. 5, children can examine bat specimens and even pet the little mammals. Santana, who loves teaching people of all ages about science, particularly enjoys helping them appreciate bats, the role they play in nature—and how they benefit humans.

“[Bats] provide important services to ecosystems,” she explains. “They eat, and thus control, insect populations. They eat fruit and disperse seeds through their guano, which helps with forest regeneration. They are pollinators, much like bees, of commercially important crops like bananas, mangoes and cocoa.”

A big part of her job is dispelling myths about bats. The reality is that there are only three species of bat that function like vampires, consuming the blood of other mammals and birds. And there is only one type of bat that occasionally will try to bite people. 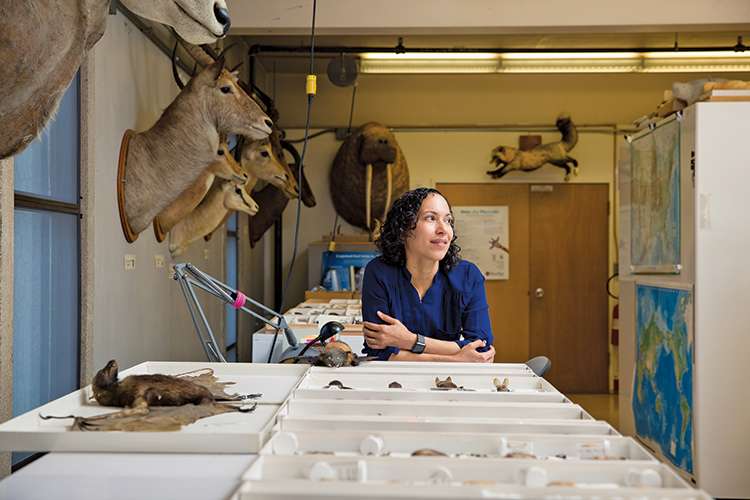 Mammal curator Sharlene Santana and friends at the Burke Museum.

When Santana leaves Seattle to go into the field (she especially likes working in Panama and Costa Rica), her aim is to trap bats. To do that, she and her fellow researchers will hang what’s called a mist net, something that looks like a big spider web.

Even though researchers wear thick leather gloves like the ones falconers don, a bat at some point usually will bite them in protest. “Fruit bats in central and south America seem to be more aggressive when we catch them,” she says. “Bats are fundamentally shy and they don’t like it when we are handling them.” It’s a good thing she doesn’t mind being bitten because part of her research requires her to measure the force of a bat’s bite when it is feeding. For example, she wants to know how some bats developed the ability to eat hard fruits at night. It definitely gives them a survival advantage.

In a recent interview for BioDiverse Perspectives, a blog aimed at the scientific community, Santana said collecting bats “is always challenging because you’re working in the tropics. It’s dark. It’s humid. It’s hot. There are mosquitoes that are biting you and biting the bats. The bats want to bite you. They want to bite everything. … You go to a habitat, put your nets there and can expect to catch certain species, but you really never know what you’re going to get. I tell people, it’s like Christmas.”

Spend an hour with Santana and you’ll find that bats are no longer creepy little mammals that flit through the dark intent on sucking your blood.

Santana confesses that she does prefer some bats over others. A particular favorite is the white-throated, round-eared bat, which is found in Central and South America. “I did a lot of work on these insect-eating bats that glean prey from vegetation. The males chew through termite nests to create a cavity, a warm and safe house for him and his family group. I always got good data from them. I also like the Honduran white bats because they are tiny, which is remarkable for a mammal that only eats fruit. When you handle them, they roll up like a little cotton ball in your hand,” she explains.

Along the way, she has seen some strange sights in her bat-catching efforts, especially in Grenada last year. Fruit bats love Grenada because the Caribbean island produces nutmeg, mace and breadfruit. Grenada is also home to many vacation houses that were abandoned because of hurricanes and lousy economic conditions. Bats had a field day, because they love to roost in the roofs of abandoned buildings. “Walking into some of these houses felt sort of post-apocalyptic: llianas and other plants growing inside, bats hanging from the ceiling or flying around by the dozens, walls covered in guano, and floors covered in a thick layer of bat-dispersed seeds that were meant to grow in a forest,” says Santana.

Bats live in social groups. Usually, one male will live with several females and their offspring, while the sons leave at sexual maturity. What makes bats so interesting is the incredible diversity within the group: Some eat insects, others eat fruit or nectar, and some will even eat other bats. The Burke’s collection features bat species from all over the world, including the 15 in Washington state.

Spend an hour with Santana and you’ll find that bats are no longer creepy little mammals that flit through the dark intent on sucking your blood. They are actually important creatures that live quietly alongside humans, eating insects that destroy crops and plants, and dispersing seeds through forest. And, as the UW batwoman would have you know, they make up 20 percent of the earth’s mammal species.