The longest round trip in human history has brought back evidence that could yield clues to the origins of the solar system.

Perfection is a rare commodity, especially in space exploration. In 1997, two years before NASA launched the Stardust mission to capture dust from a comet, a Delta II rocket worth around $40 million blew up on a launch pad at Cape Canaveral, raining debris over a wide area. It was the same model of Boeing rocket that NASA was planning to use to launch Stardust.

Barely a year before Stardust was supposed to return to Earth, an unmanned NASA spacecraft called Genesis did a cosmic face-plant in the Utah desert. When its parachutes failed to open, Genesis hit with a 200-miles-per-hour splat. (Remarkably, more than 80 percent of the data was saved.) It was made by the same people who made Stardust.

But if bad fortune can run in streaks, so can good. Just ask UW Astronomy Professor Donald Brownlee, ’71. 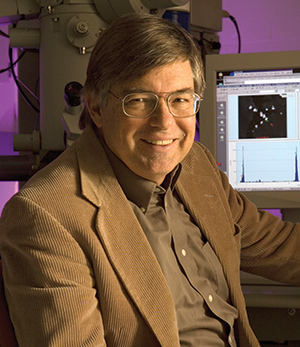 The samples that Stardust brought back from comet Wild 2 totaled far less than a thimbleful of material, yet they are almost an embarrassment of riches for scientists, who will be studying them for decades.

“It’s not much, and yet it’s so much that we’re almost overwhelmed,” Brownlee explained recently to a group of science writers gathered in a conference room two floors up from his UW office. As he spoke, he ran a slide showing a speck magnified 30,000 times by his lab’s electron microscope.

Although the grains are tiny—far less than the width of a hair—a single piece of dust can be sliced into hundreds of specimens, he said. These minute specks are the building blocks of the solar system and, since they spent so much time in the deep freeze of deep space, remain close to their original condition. Scientists believe they could shed new clues on the birth of the solar system. “We are stardust,” Brownlee is fond of noting. “Virtually all the atoms in our bodies were in little grains like the ones from the comet, before the Earth and sun were formed.”

Already Brownlee and fellow researchers examining Stardust’s treasure have come across a puzzle that will take at least months, perhaps years, to unravel. The particles from Wild 2 contain crystalline minerals that formed around our sun or other stars, some of the hottest places in the universe, with temperatures in the thousands of degrees. So how did they manage to find their way into a comet that formed 4.6 billion years ago and almost that many miles away from the sun, where the temperature doesn’t get much warmer than 450 degrees below zero? The answer isn’t at all clear.

“These are the hottest minerals found in the coldest place, in the ‘Siberia’ of the solar system,” Brownlee told reporters in March at the annual Lunar and Planetary Science Conference near Houston, where Stardust’s first science results were unveiled.

The leading theory at the moment is that the particles reached a white-hot temperature as a cloud of planet-forming material was circling the sun. Then the sun’s giant energetic bursts fired the particles like cannon balls beyond the cloud to the outer edges of the solar system, 50 times farther away than Earth, to the spot beyond Neptune and Pluto where comets were forming. Once there, these grains coagulated inside a conglomeration of rocky particles and ice, where they would anonymously go about their business, circling the sun as a comet out beyond the orbit of Neptune for 4.5 million millennia.

In 1974, Wild 2 had a close brush with Jupiter—picture a BB caroming off a basketball, except in this case their gravitational fields kept the two bodies from actually touching. The encounter with the giant planet changed how the comet circles the sun and moved its nearest solar approach to between the orbits of Mars and Jupiter. The encounter also shortened the comet’s solar orbit time from about 40 years to less than seven. The closer orbital approach and the shorter orbit period meant a spacecraft could travel to Wild 2, take pictures, gather data and collect samples, and still return to Earth in a reasonable time.

The 1974 encounter also meant that the material in the comet was “fresh.” The comet had not been exposed to the sun’s heat for a long time, which would have changed its chemical makeup. That was a crucial factor for the $212 million NASA Discovery mission; scientists wanted to snare material frozen in time since the beginning of the solar system. Now that the material has arrived on Earth, they hope it will help them understand precisely how the sun and planets formed.

In 1978, four years after the encounter with Jupiter, Swiss astronomer Paul Wild (pronounced “Vilt”) snapped photographs that revealed the presence of the comet that bears his name. It was a couple of years later that Brownlee began dreaming of a comet mission—but Wild 2 was not the target of his ambition. Instead he was thinking of the most famous of them all, Halley’s comet, which has been making visits to Earth every 76 years or so since about 468 B.C. and last swung by this neighborhood in 1986. In the end, five spacecraft visited Halley that year, but none was from the United States—a sample-return mission to a comet was deemed unworkable then. 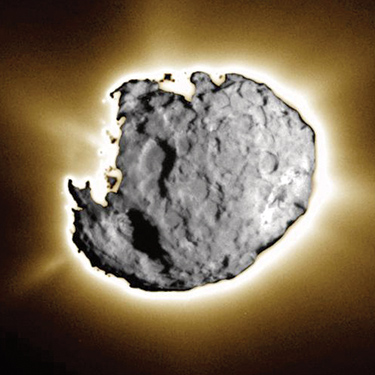 A close-up of the comet Wild 2 taken by Stardust’s camera.

Tsou had developed a specialized version of an exotic material called aerogel that would make it possible for Stardust to capture comet grains traveling five times the speed of a rifle bullet. Aerogel, sometimes called “frozen smoke,” is a transparent material as smooth as glass. Though it is a solid, its makeup is up to 99.9 percent air. It was originally developed in the 1930s but remains a highly specialized and expensive material. A block of aerogel the size of a human weighs less than a pound but can support the weight of a small car.

Originally Brownlee and Tsou devised a mission that would capture grains of interstellar dust—true stardust—streaming into the solar system from elsewhere in the galaxy. But they broadened their horizons and ultimately included a visit to little-known Wild 2, where they wanted to use an aerogel collector shaped like an oversized tennis racket to gather particles streaming from the comet’s core. Finally in 1995, NASA approved the mission, and it was launched less than four years later. Brownlee chose the name “Stardust” for a couple of reasons. First, it properly described a key part of the mission, capturing interstellar dust. But, more importantly, the name stirs the imagination, is a term the general public can relate to and is the title of a legendary Hoagy Carmichael song, one played at the launch and at various key points of the mission.

Though Brownlee has become one of the nation’s most celebrated astronomers, he didn’t plan a career in astronomy at all. He earned an undergraduate engineering degree from the University of California, Berkeley, where he took a general astronomy course from Paul Hodge. He was hooked. In 1965, Hodge left Cal for the UW and Brownlee soon followed, becoming one of the University’s first astronomy graduate students and receiving his doctorate in 1971.

During that time Brownlee honed his scientific fascination with space dust, which blankets the Earth to the tune of tens of thousands of tons every year. That includes debris from comets, which enters the atmosphere as Earth passes through the paths where the comets traveled. Using a high-altitude balloon and a powerful vacuum device, Brownlee became the first person to recover some of those tiny grains in the atmosphere—material that other scientists now refer to as Brownlee Particles.

It was also during that time that he met fellow doctoral student Paula Szkody, ’75. They eventually married and became colleagues on the UW astronomy faculty. Brownlee is an expert on comets and space dust; Szkody is an authority on binary star systems called cataclysmic variables. Their daughter was in middle school and their son in elementary school when Stardust plans were being laid; now she’s an environmental scientist and he is a soon-to-be computer scientist. 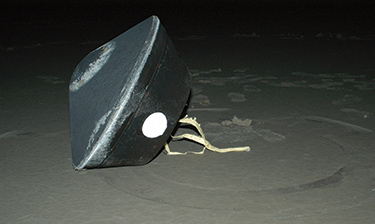 The Stardust return capsule rests on the desert floor after its 2.88-billion-mile journey. Photo courtesy of NASA.

The family celebrated when Stardust was launched on Feb. 7, 1999; agonized in 2000 when the spacecraft was overwhelmed by a gigantic solar flare that disoriented Stardust’s computers; and held their collective breath when the spacecraft finally met its quarry in January 2004. Finally they cheered on Jan. 15, when Stardust roared into the atmosphere at nearly 29,000 miles an hour, setting the return-speed record for a human-made object making a safe landing.

But while the Stardust mission has been a lingering presence in their lives, it hasn’t been all-consuming. Brownlee maintained his teaching duties and managed to co-author a pair of astrobiology books with UW paleontologist Peter Ward. One of them, “Rare Earth,” became a scientific best seller and to this day sparks heated debate because of its premise that, while simple life might be abundant in the universe, complex life like that on Earth is probably very rare.

Evidence from Stardust probably won’t add much one way or the other to the “Rare Earth” debate. But Brownlee expects the samples to keep him, and other scientists, busy for years. He hopes to find clues about how the planets formed, perhaps even how water and the organic molecules that eventually sparked life first arrived on Earth.

Meanwhile, the mother ship continues to orbit the sun. It carries microchips engraved with a list of more than 1 million people who submitted their names to NASA in 1997-98 (similar chips were aboard the return capsule). On Jan. 29, controllers put the craft into sleep mode, essentially a long hibernation, for a three-year trek around the sun. It could stay in that orbit for a very long time, until gravity finally kicks it out of the solar system. But NASA has other ideas.

Stardust still has thruster fuel and its solar panels are still functioning, so it could be used for a new mission. Of course, the collection device and return capsule are gone, but there are scientific instruments on board that can take various measurements, as well as the camera that snapped 72 stunning photographs of Wild 2 as Stardust flew by in 2004.

There are a variety of possibilities for a new mission. One proposal would send Stardust to comet Temple 1 to take pictures of a crater created by NASA’s Deep Impact mission last summer. Deep Impact made the crater in spectacular fashion, but the resulting dust cloud made it impossible to capture clear images. Stardust presents the best opportunity to fill that information gap. Brownlee is part of the Temple 1 team, but it will likely be at least fall before NASA decides whether to award a new mission.

If the proposal by Brownlee’s team is accepted, that would be, well, perfection.

At top: Shaped like a tennis racket, the Stardust collector traps particles as it flies by the Wild 2 comet in an artist’s rendering of the mission. Image courtesy of NASA.

Vince Stricherz, a reporter and editor for more than 20 years, now covers physical sciences in the UW Office of News and Information.