Rick Steves, ’78, is an idealist. He doesn’t expect you to agree with him. But he’s not speaking his mind or advocating controversial legal reform to be popular. In fact, his opinions sometimes cost him business. None of this fazes him.

Travel made him this way. The tenets to which he now clings were developed over the years, in close commune with other people of the world. Now, he wants the same for others. This fall, his book Travel as a Political Act won the Society of American Travel Writers’ Lowell Thomas Travel Book of the Year award. It is a book not about fun in the sun, or where to find a budget room in Budapest, but rather one that encourages Americans to broaden their perspectives through travel.

Steves, who went to college intending to spend his life teaching piano, became a travel guru by accident. After living out of a backpack in Europe during the summers, he’d return to campus and share his knowledge about budget travel with other students. Thus, a mogul was born.

By 1980 Steves had given up piano, was only teaching travel and had a first book—Europe Through the Backdoor. Thirty years later he’s the country’s most renowned travel expert, employs 80 people and has 30 books, a nationally broadcast TV show, a radio show and a life he calls fun. 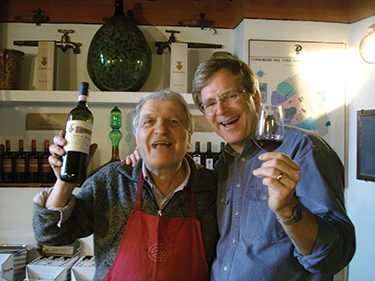 And he enjoys the right to stand, rigidly, vocally, for what he believes.

Take the peace flag he flew outside his building a few years back, which prompted a passer-by to say, “I bet if you knew how much that peace flag was costing your bottom line, you wouldn’t have put it up.”

Steves was horrified. “I can support a cause even if it’s bad for my business, because I’m a success. That’s a different outlook. That’s the truth. That’s enlightened. I’m thankful for that.”

Peace isn’t the only value Steves is flying. He’s also a member of NORML and an advocate for U.S. drug policy reform. 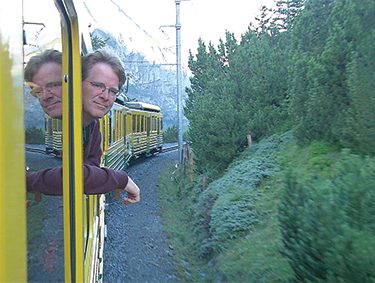 Rick Steves rides a train in the Alps.

Why does he advocate on behalf of reforming marijuana laws?

“I know a lot of people who smoke a little pot now and then. Should you lock them up? No. Poor and black people get locked up, not rich white people.”

Which lies at the heart of his determination to legalize marijuana. Aware that both the use and criminalization of drugs pose a great risk to the black community, he wants a drug policy that removes criminalization from the issue, so that society can deal with the health and social issues that result from drug use.

“The irony is, there’s not a reservoir of people wishing they could ruin their lives if only it [pot] were legal,” says Steves. He says nearly everyone who wants to smoke does. “I’m not pro-drugs. Drugs are bad. It’s smart drug policy. We’ve got to minimize harm.” 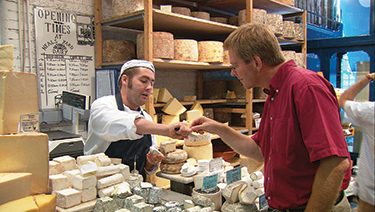 Steves at a cheese shop in London.

And how has this very vocal stance affected Steves’ business? Not at all, he says. Then, he pauses and reflects: “Actually, I did just have someone boycott our tours. All I can think, when someone says, ‘We’re never going to take your tours again,’ is that Europe will be more fun without them.”

Homelessness is another social issue Steves tackles when he’s not taking on Europe. Every year the budget-travel guru loses the taxable interest on a $1.5 million, 25-unit apartment complex in Lynnwood that he purchased in 2005 and turned over to the YWCA to provide transitional housing to homeless women and their children. In return, Steves goes to bed each night knowing that 25 women who have hit hard times have a good roof over their heads.

Not only does the avowed capitalist think it’s a good thing to do with his money, he knows what it’s like to need an affordable room. It’s what he spends 120 nights each year scouring Europe for.

“Letting a few people move out of their cars and into someplace stable isn’t going to undercut capitalism, it’s good for capitalism,” says Steves. “I’ve learned, even if you’re motivated only by greed, if you know what’s good for you, you don’t want to be filthy rich in a desperately poor world.”

Social reform as a way of life: a belief foreign to Steves before world travel. That’s why he’s teaching other people to travel.

“I used to think you can travel because the cheese is good. But no, you can travel also because you can broaden your perspective and bring it home, and the rest of the world can be your friend.”

Julie H. Case is the managing editor of Columns.