Unmanned Seagliders give researchers a long look under the sea

By Sandra Hines | Photos courtesy of the Applied Physics Laboratory

Sleek, torpedo-shaped Seagliders developed at the University of Washington can operate at sea for months at a time, navigating thousands of miles across powerful boundary currents and through eddies in the roughest of seas.

Surfacing as programmed, Seagliders phone home to scientists back on campus or onboard ships to relay new data about places phytoplankton—tiny ocean plants on which other ocean life depend—are thriving, where oceans are warming and where changes may threaten worldwide ocean circulation.

Then Seagliders dive to the depths again. And they do it all without propellers.

Seagliders, under development since 1995 at the UW’s School of Oceanography and Applied Physics Laboratory, have repeatedly set world endurance and range records for autonomous underwater vehicles.

Just this summer, a Seaglider completed a nine-month, five-day mission, a record more than double what any other kind of underwater glider has accomplished. During that time it propelled itself 3,050 miles (more than 4,900 kilometers) through the waters of the Northeast Pacific, racking up a distance equivalent to crossing the Atlantic Ocean from New England to Europe. Records set include time at sea and distance traveled through the water under its own power.

“Operating endurance is about how far a glider propels itself—as opposed to drifting with currents—and how often dives are made to collect oceanographic data,” says Charles Eriksen, professor of oceanography. The Seaglider made more than 735 dives to a depth of 3,300 feet (1 kilometer) recording such things as temperature and salinity that help scientists understand changing ocean conditions. During this mission in the Northeast Pacific, for example, the Seaglider contributed to the 50-year ship-sampling record started by Canadian scientists to learn more about the major current that comes across the Pacific and splits into two key North American currents, the Alaska current running north and the California current south.

Eriksen’s group, which is funded by the Office of Naval Research, advanced the open-ocean record by making the Seaglider body lighter so it could carry more batteries. The Applied Physics Laboratory redesigned the internal mechanics so more powerful batteries could be installed and rewrote control software to further improve energy efficiency.

Batteries supply power for instruments and Seaglider operation, as well as being part of the clever way in which the UW gliders travel through the water. To dive, a Seaglider deflates a buoyant swim bladder to make itself sink and pitches its nose down by shifting its battery pack toward the nose end. Wings make it glide at an angle rather than sink straight down. After diving the battery pack is moved toward the rear, raising the nose, while fluid is pumped into the swim bladder making the Seaglider buoyant so it rises at an angle toward the surface. 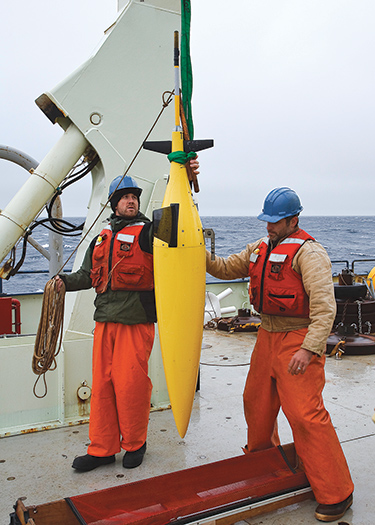 A Seaglider is prepared for deployment in Davis Strait by Avery Snyder and Adam Huxtable, field engineers with the UW’s Applied Physics Laboratory.

Unlike faster-moving propeller-driven autonomous underwater vehicles, which may need to be retrieved by ships only days after being deployed, Seagliders can operate on their own for months at a time.

“Seagliders enable us to survey remote, inhospitable regions of the ocean for the better part of a year on a single mission, all by remote control from any place a laptop can get an Internet connection, even on the bus riding to work,” says Eriksen. “It’s like having a personal ship to go with a personal computer.”

Another Seaglider this year concluded a mission measuring waters from the Arctic Ocean during a nearly 6-month, record-breaking journey under the partially ice-covered Davis Strait.

Scientists are interested in how much fresh water exits the Arctic Ocean through Davis Strait into the Labrador Sea. They worry that climate change may increase the amount of fresh water and that would affect the formation of very dense water in the Labrador Sea, a critical component driving the circulation of the world’s oceans, according to Craig Lee, a principal oceanographer with the Applied Physics Laboratory. Lee and senior oceanographer Jason Gobat lead the group developing the under-ice Seaglider.

The group, the first and only one in the world sending gliders under the ice, has developed a glider able to:

Lee and his group developed the under-ice capabilities with funding from the National Science Foundation, where program managers wanted to add the vehicle to its Arctic Observing Network. The Seaglider relied on five sound sources in Davis Strait to figure out where it was and navigate under the ice. It made two round trips under the ice of about 230 miles each. While under the ice, the glider successfully surfaced 10 times to transmit data. It was collected from open water last February by the Danish Navy.

Both Lee and Eriksen expect to Seagliders to continue to break endurance records.

During work in the North Pacific, for example, Eriksen said there was an unexpected drain on battery power. Some ocean sound triggered the Seaglider to respond with pings as if a ship were trying to locate it in the ocean. No ship was searching for it but the Seaglider slavishly sent out a spurious ping on average every 30 seconds for nine months, sapping more than 14 percent of the battery power. Without the errant pinging, a problem now fixed, an even longer deployment should be possible, he says.

“Today’s urgent questions surrounding climate change and its impacts demand measurements that span the world’s oceans and continue for decades,” says Lee. “Seagliders provide a critical tool for meeting this need, allowing oceanographers to maintain a persistent presence in remote regions that may be difficult, impractical or simply impossible to sample by other means.”

Sandra Hines writes about oceanography as assistant director of the UW Office of News and Information.