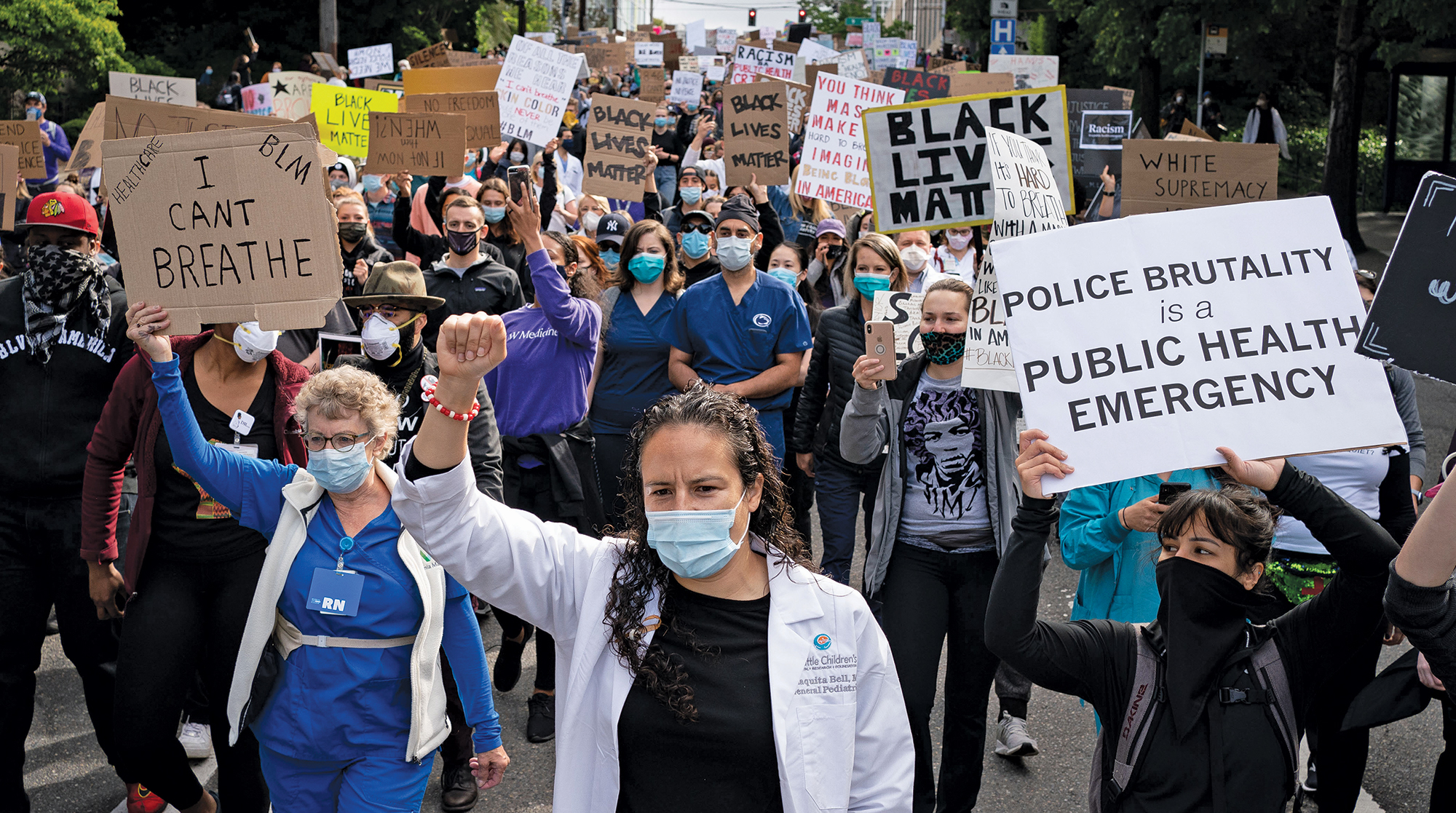 In late May, Dr. Olivia Kates was riding the train to work at UW Medical Center Montlake. A passenger nearby approached and asked what she did for a living. George Floyd had just been killed, and activists across the country were protesting in support of Black Lives Matter. When Kates explained that she was a senior fellow in infectious diseases, the passenger unloaded her concerns about the novel coronavirus—not about immunity, transmission or vaccines, but criticism of the protests because of claims that they would lead to an increase in coronavirus infections.

“I really struggled to steer that interaction and convey one message that is important to me, which is that masking, social distancing and following public health guidelines are really essential, while supporting another message that conscious efforts toward anti-racism are also completely essential,” Kates says.

When Kates arrived at the office, she talked to a colleague, Dr. Rachel Bender Ignacio, ’08, ’14, ’15, who had heard similar concerns. They came up with a plan to pen a letter in support of the protests, using their authority as infectious disease physicians—along with the privilege they have because they are white—to help change the narrative. The two doctors invited several colleagues from their time at the UW—Dr. Abir Hussein, Dr. Jade Pagkas-Bather, ’19, and two others—to join them because they needed to add more voices to the project. Together, they crafted a letter calling for an anti-racist public health response to the protests. “White supremacy is a lethal public health issue that predates and contributes to COVID-19,” the letter reads. “ … Protests against systemic racism, which fosters the disproportionate burden of COVID-19 on Black communities and also perpetuates police violence, must be supported.” It also opposed the use of tear gas, called on police to wear masks and maintain social distancing, and gave recommendations on how to conduct protests safely.

On May 30, the group sent the letter to a handful of colleagues and shared it on social media. By June 4, 1,288 infectious-disease experts, public health professionals and community stakeholders nationwide had signed it. Stories about the letter appeared in influential media like CNN, NPR, The New York Times, The Washington Post, The Atlantic and more. When they stopped taking signatures, 4,202 names were included.

“We are going to find a vaccine for COVID-19. Racism has been here for centuries, and there is no vaccine.”

The letter was part of a wider movement throughout the medical community supporting the protests. The pandemic had laid bare society’s racial inequities: If you are Black, you are more likely to be an essential worker who can’t work from home, lack health insurance, have pre-existing conditions—and become hospitalized for and die as a result of the coronavirus. You also are more likely to suffer disproportionately from disease, die in childbirth or have your infant die.

In every corner of the country, medical workers called for racial justice through protests, op-eds, appearances on cable news and more. On June 6, approximately 10,000 health-care workers converged on Seattle to be part of the Doctors for Justice March, organized by UW Medicine’s Dr. Estell Williams, ’13, and Edwin Lindo, ’12.

“We are going to find a vaccine for COVID-19. Racism has been here for centuries, and there is no vaccine,” says Ali Mokdad, a professor at the UW Institute for Health Metrics and Evaluation. He says racism is a bigger threat to public health than the coronavirus. “You can see just from the pandemic examples of how racism over centuries has built up in people’s lives and made them more vulnerable and more likely to die. As public health professionals, it is our duty to look at the whole picture, not just the individual pieces.” In June, the influential institute, known for its coronavirus projections, announced it would study the public health impacts of racism.

While the medical community is bringing another voice to the fight for racial justice, it’s also working to make up for a legacy of medicine used to enforce racism and white supremacy. Racial bias in medicine and medical education became apparent to Naomi Nkinsi, a student in the UW School of Medicine, during her first year of medical school. She was attending a class lecture about kidneys when the professor came to the last slide. It read that race is an important factor in determining kidney function.

“The white coat is a signifier of my willingness to humbly serve other people and show them a radical sense of empathy.”

Naomi Nkinsi, a student in the UW School of Medicine

Nkinsi was puzzled; she had never heard about a connection between kidneys and skin tone. Claims about physiological differences between different races had been disproven long ago. She learned that a widely used kidney test uses a race-based equation to report different results for Black and non-Black patients—based on the outdated belief that Black people have more muscle mass. The outcome is that Black patients score higher for kidney function, leading to delays in getting treatment. The New England Journal of Medicine has identified seven other medical algorithms that are similarly tainted by racial bias and affect the quality of care Black patients receive.

“I knew that there was racism in medicine, but I thought a lot of it was going to be interpersonal racism,” says Nkinsi, who said she has experienced her share of racism in medical school as one of five Black students in her class of around 100. “I learned that it’s built into algorithms that our bodies are different. It gave me a new sense of distrust in medical systems, because now I’m learning that every physician I’ve ever encountered is taught to see me as inferior.” Nkinsi challenged the use of race in the kidney test in class, initially facing resistance from classmates and instructors. She went on to lead a two-year effort to fight the practice. On May 29, the UW School of Medicine announced it would stop using the race-based equation as part of the test.

For Nkinsi, fighting racism in medicine is about using the power and privilege of her position as a medical professional. It goes back to why she wanted to become a doctor in the first place: “The white coat is a signifier of my willingness to humbly serve other people and show them a radical sense of empathy.”

Empathy is at the heart of defeating both racism and the coronavirus.

“COVID is out of control for the same reasons that racism is out of control—an individualist orientation that comes off as a lack of compassion for your fellow man,” Kates says. “We see that people may not universally be willing to correct their behavior or attitudes to reduce transmission of COVID. But COVID will hopefully one day be corrected by science. Correcting your behavior and attitudes will be the only way to overcome white supremacy.  Fighting racism intuitively must be bigger.”