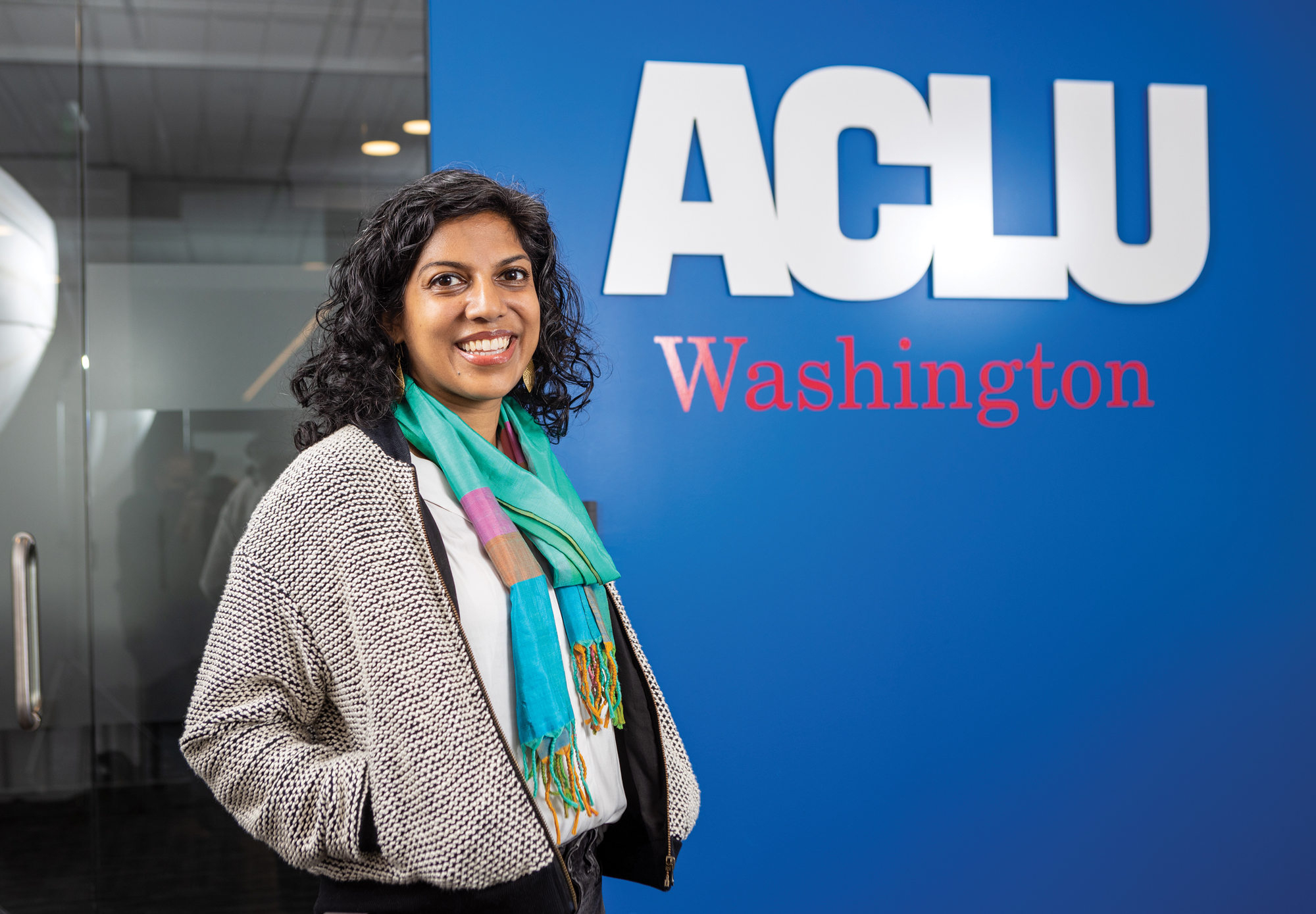 UW law alum is a driving force in police reform

Enoka Herat, ’10, is the daughter of Sri Lankan immigrants. They had a very idealistic view of America, she says. “Living as a little girl of color in the predominantly white space where I was growing up, I saw where a lot of those ideals fell short.” After college, she went to law school so she could be an advocate for and amplify the voices of those in her community. While attending UW, she was co-presi­dent of the Immigrant Family Advocacy Project, a member of the Innocence Project clinic and an editor on the Washington Law Review.

Today she is a legal engine behind a group of police reform bills that were recently signed into law. As the Police Practices and Immigration Counsel for the American Civil Liberties Union of Washington, she plays a leading role in drafting many of Washington’s recent police reform bills. “What drove me to law school, to work with ACLU and to work for immigrant rights and rights of those most targeted by policing is the fight for racial equity,” Herat says.

Herat works closely with the Washington Coalition for Police Accountability (WCPA), a network led by families who have lost loved ones to police violence. “We really try to center the voices of people most impacted by the issues that we are advocating for, with the idea that they are in the best position to figure out solutions.” Herat says. “I see my role in the legislative process as providing a resource to serve the agenda of those most impacted by police violence.”

“The law really emphasizes de-escalation rather than confrontation, and recognizes that when force is required, that officers should use the least amount of force.”

Herat admires the family members of the victims. “I feel like I’m constantly in awe of their ability to move forward to advocate despite all the trauma they’ve endured and continue to endure,” she says. “I really look to their experiences and try to hold up their solutions as I approached this work.”

She remembers her brother dealing with racism, discrimination and bias in local policing during high school. In a group of teenage friends, her brother would be arrested while his white peers were not. “I definitely grew up seeing that disparity in treatment,” Herat says. But while her brother was subject to exceedingly unequal treatment, he still came home after his contact with police. Other people of color around the country didn’t.

“We do this work not because we want to, but because we have to, because our loved ones have been lost to police violence,” says Katrina Johnson, a cousin of Charleena Lyles and one of the founders of the WCPA. In 2017, Lyles, a pregnant mother of four, was killed by police in front of her children at her Sand Point apartment.

“We don’t want to see any more mothers or sisters or brothers or cousins or nieces or children crying because they’ve lost someone they love,” says Marilyn Covarrubias, a member of the Suquamish nation and activist with the WCPA. Her son Daniel was fatally shot by police in 2015 while in a mental health crisis. 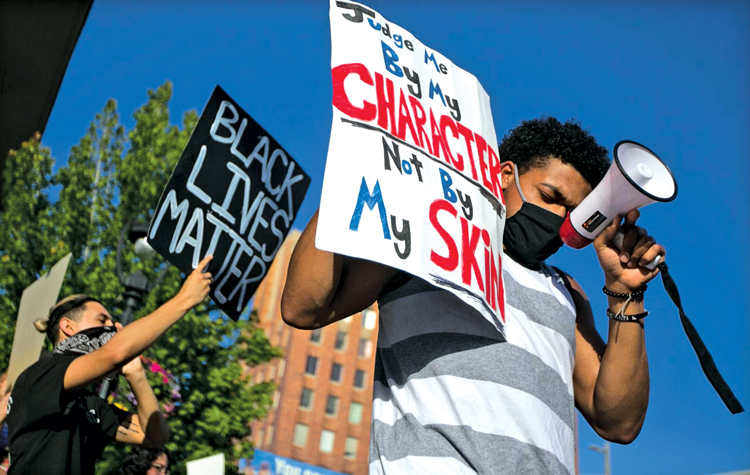 Thanks to the efforts the victims’ families and the work of lawyers like Herat, Washington state lawmakers recently passed 14 bills focusing on policing, including one requiring officers to de-escalate situations and take more care in the use of force. Two laws went into effect in July. They address calls to action of local activists, advocates and organizers. According to Herat, none of the bills would have passed without the thousands of people across Washington state protesting racial injustice and police violence last summer. “They wanted police to be held accountable,” Herat says. “They wanted to reduce police brutality and police violence.”

Herat worked with WCPA as well as law enforcement, lawmakers and legislative staff in drafting HB 1054. “We’re removing certain equipment and tactics from an officer’s toolkit, such as banning chokehold and neck restraints like the ones that were used to kill George Floyd and Manny Ellis here in Washington state,” Herat says. The bill also bars no-knock warrants like the one that resulted in the death of Breonna Taylor, and the use of any military equipment. Tear gas is also largely prohibited unless authorized by a supervising officer and all other alternatives have been exhausted—a response to the excessive use of the chemical agent to break up largely peaceful protests in Seattle last summer.

Another bill, HB 1310, focuses on police use of force. “For me and my family, it was very important because my brother, the overkill that they used when they murdered him, he was tased four times and then shot 16,” says Nickeia Hunter, a WCPA member whose brother, Carlos, was killed by Vancouver police in 2019. “I don’t really think that there’s ever an instance that there needs to be such force used.” This bill gives Hunter and others hope that police will act to de-escalate the situation so that other families won’t have to endure what hers has.

“We don’t want them making-split second decisions,” Johnson says. “We want them to make the best decision in a split second. That’s the difference between someone living and someone dying.

Under the new law, officers may only use force under very specific circumstances, and deadly force can only be used when necessary to protect someone’s life. “Not only is it preventative, but it creates a reasonable care standard that can be used to hold officers accountable if violations or excessive force or misconduct occurred,” Herat says. Before this law, officers may have forcibly subdued folks, especially on crisis calls.  Now, “if there’s no imminent threat of harm to someone, they have to have probable cause that someone has committed a crime before they could even lay hands on someone,” Herat says. “It creates a requirement to use the training that they received to de-escalate situations. The law really emphasizes de-escalation rather than confrontation, and recognizes that when force is required, that officers should use the least amount of force, that they should stop using force on the necessity end, that they should use less lethal weapons.” 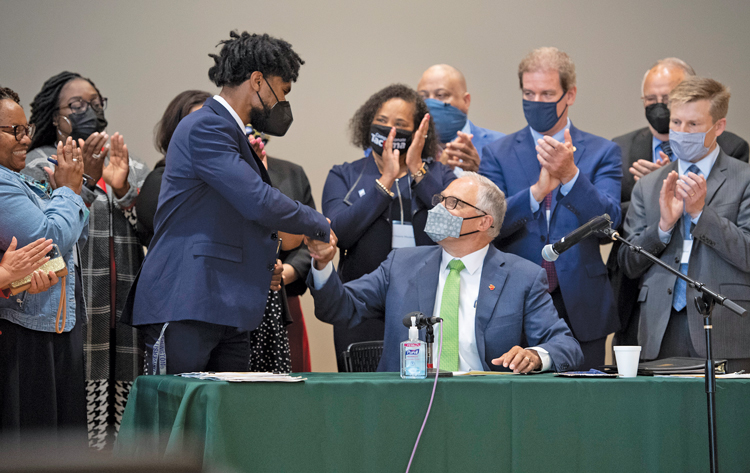 In May, Gov. Jay Inslee signed 12 bills into law to reduce the use of deadly force and ensure more accountability and transparency from law enforcement. Family members of victims of police violence in Washington helped craft the bills. They gathered in Tacoma to witness the signing. Federal Way Rep. Jesse Johnson, ’12, ’16, who sponsored the bills, shakes his hand. (Photo by Tony Overman / The News Tribune, via AP)

Although law enforcement and the Washington Association of Sheriffs & Police Chiefs were involved in the drafting of these bills, police leaders around the state have issued statements that these bills would negatively affect their ability to do their jobs and public safety. This misinformation spread by the police is local law enforcement’s way of inciting fear into the community, says Johnson. “They’re spewing this because they want to get community to fear that something terrible is going to happen to them, but there can’t be anything more terrible than the loss of life that has been happening over and over again,” she adds. “We are currently living in an unsafe environment because we cannot call the police for help. They show up and they’re killing people. We’re already unsafe.”

The culture of policing has been a major obstacle to holding individual officers accountable for their violence, largely against communities of color. “I think many of us, as we witnessed the videos of the killing of George Floyd, were appalled that there were other officers there who did nothing to intervene to save his life,” Herat says. “The whole package of bills is designed to change the culture of policing. I don’t think it’s going to take one thing. I think it’s going to take many things, and time, to really change.” Herat says. She hopes that instances like this can be avoided in Washington through SB 5066, which requires officers to intervene if they see another officer using excessive force.

Herat believes that these new laws also provide an opportunity for jurisdictions to think about alternative ways to respond to crisis calls with a focus on other important preventive measures like access to housing, education, health care and mental health services. “I was speaking to one officer a few weeks ago. They said if someone is calling 911 in a crisis, the system has already failed them,” Herat says.

The next step is ensuring that those who have been injured by police violence have recourse. HB 1202 would require a removal of qualified immunity: the legal principle that protects officers from civil suits. “We did change things, and it’s something to be really proud of and something that we can celebrate,” Herat says. But she adds: “There’s still more to do to make sure that we hold our officers to a high standard, and when there is misconduct that they’re held accountable.”

Pictured at top: Through her work at the American Civil Liberties Union of Washington, law alum Enoka Herat has helped create landmark legislation around police tactics and use of force.