UW researcher seeks the key to why cells go bad

Once just a theory, Lawrence Loeb's mutation breakthrough could lead to new cancer treatments and even an unconventional way to stop AIDS.

How does cancer start? You might say it starts in the lungs, pancreas or the brain. It starts when normal cells, tiny building blocks of life, become cancer cells. The cells go bad, just like the juvenile delinquents in a 1950s "B" movie. Shedding their normal inhibitions, the teens do things they know they shouldn't. Cells lose their inhibitions, too; cancerous clumps begin multiplying wildly, giving rise to a deadly tumor or blood disease.

Just as one can’t usually identify the day and hour a person begins to wobble toward delinquency, it is extremely difficult to find the beginning of cancer in a single human cell.

Lawrence Loeb spends his days trying to answer this question. A molecular biologist and pathologist who heads the Joseph Gottstein Memorial Cancer Research Laboratories at the University of Washington, Loeb is at the center of a revolution in understanding the mutation of cells. It might be arcane basic science, but scientists believe that once we understand how mutations begin, we can develop new ways to fight cancer and the virus that causes AIDS.

The starting point of Loeb’s obsession came in 1974, when he was a 38-year-old junior member of a team at the Fox Chase Center for Cancer in Philadelphia. 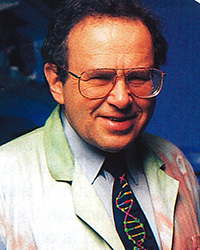 Loeb wrote an essay about how cancer cells might get started on the long road they travel toward aggressive malignancy, but he wasn’t sure it was worth publishing. He showed it to a senior colleague who said: “Larry, this is the most important work you will ever do.”

His essay outlined a theory that he called “the mutator phenotype hypothesis.” Mutation, the altering of the genes of an organism, can happen in hundreds of ways, from direct physical damage to the cell, to an enzyme that misbehaves during the copying process.

Imagine your DNA as a book ready for publication. Problems in publication could range from the big—a freeway crash of the truck carrying the original manuscript—to the small—a single typographical error entered by the finger of a sleepy typesetter. Big or small, any difference between original and copy is a mutation.

Imagine this book tells the story of the life of a cell. It outlines every chemical reaction that needs to happen for that cell to work properly. It explains how the cell should use fuel, consume oxygen, protect itself from invaders, and replicate itself when the time comes for a new cell. If an error in the book says to make the wrong protein, even wrong by a single small part, that protein will not work properly in a sequence of chemical reactions that might be 100 changes long.

What Loeb proposed, but could not prove at the time, is that cancer cells arise when the machinery that maintains the integrity of copying DNA is thrown off. An entirely new kind of cell, possessing what he calls “a mutator phenotype,” is born.

A mutator phenotype may result from different events, but one example is faulty copying machinery. Imagine our DNA publication rolling to a proofreading department in the cell. Enzymes known as polymerases are often involved in this proofreading. Now, what if something has happened to make all the proofreaders blind? All the mistakes will get left in this copy. These mistakes cause even more mistakes. Even if our proofreaders regained their sight, they couldn’t catch all of them.

Studying mutation has thrust Loeb and his colleagues into the spotlight of a technological explosion.

The human body can throw up quite a few barriers to cancer cell growth in the early going. But each new mistake or mutation may prove invulnerable to one of those barriers, and thus, allow some of the cancer cells to survive. This ability to overcome every weapon is a hallmark of aggressive cancer.

Recent laboratory studies, the likes of which were impossible before the Human Genome Project and sequencing of DNA, yielded evidence that Loeb’s theory was correct. While cataloging 11,000 mutations in colon cancer cells, researchers found some of the same mutations in the cells of polyps that were not yet cancerous. The link was crucial to proving Loeb’s theory. This suggests that something happens very early in the process that begins years of frantic mutation toward aggressive cancer.

Armed with this information, doctors might one day treat cancer by slowing down mutation. If successful, these techniques might slow the deadly trajectory of cells so that true aggressive cancer never forms.

“It takes cancers 20 years from the time of exposure of an individual to a cancer-causing agent until the time they get symptoms,” Loeb said, in an interview about chronic colon diseases. “Perhaps we can prolong life by delaying the rate at which these mutations occur.”

Within five years, it may be possible for a 35-year-old man who fears colon cancer to get a routine screening for the mutator phenotype. If researchers are successful at developing treatments based on Loeb’s idea, doctors could administer medicine that radically slows the mutation rate of those cells. Instead of a malignancy in his colon when he is 55, he may get one in his 90s or never.

Studying mutation has thrust Loeb and his colleagues into the spotlight of a technological explosion. He hopes it will be possible within a few years not just to count the mutations on a particular spot of a chromosome, but to count the random mutations on the entire length of the genome—six billion nucleotides.

Where he sits, in the spotlight, requires a frenzy of communication with fellow scientists. Loeb is the president-elect of the Environmental Mutagen Society, a national organization at the forefront of cancer research. He is the past president of the American Association for Cancer Research, and was once the associate editor of its journal.

The tobacco industry was irate over researchers getting involved in public health policy, but Loeb stood firm.

While his research is intense, Loeb never loses sight of the human side of cancer patients, which is why he devotes so much time to the medical-scientist program at the UW School of Medicine.

He is director of this program, which allows students to become medical doctors and get a research Ph.D. at the same time, uniting the worlds of ordinary patients and laboratories. The UW has the largest such program in the country, with 80 students. All of them, at least once, get invited to Loeb’s home in Bellevue for dinner.

In his laboratory, he is a coach. For the doctor-scientist students, he is the gatekeeper. He describes himself as helping brilliant people to find the right place (and people) with which to continue their work. “I don’t teach them anything,” he says. “I just help them meet the right people.”

Unlike some laboratory scientists, he has also spent his life trying to move public opinion and save lives through education.

His moral outrage, and his willingness to be a public target, drove him to take a very public position in the midst of a controversy in 1984, when he pushed his committee at the American Association of Cancer Research to publish a position paper on smoking and lung cancer that emphasized reducing smoking in society. The tobacco industry was irate over researchers getting involved in public health policy, but Loeb stood firm. Because of the article’s publication, several medical organizations stopped accepting any research grants from the tobacco industry.

Former UW Public Health and Community Medicine Dean Gilbert Omenn, now at the University of Michigan, praises Loeb’s courage and describes him as “an international leader in advocacy to reduce tobacco use.”

Loeb traces the birth of his activism to that paper’s publication. He is still crusading. On a long airplane flight to Japan, he noticed that while smoking was not allowed during the flight, the airline gave away free cigarettes to passengers. In his outrage, he wrote a letter to the airline that succeeded in ending the practice.

There is another link between smoking and Loeb’s research. It was lung cancer that killed Puget Sound patriarch Joseph Gottstein, whose family continues to endow Loeb’s laboratory.

Somewhere in the six billion molecules that form the alphabet of human DNA, Loeb hopes to find out exactly how cancer begins. Some people might be daunted by the staggering number of mutations that must be individually explored. Each one must be probed to discover where cancer begins.

“I don’t think of them as questions,” he answers, honestly. “Every one of them is something I can find out.”

Yelling ‘jump’ to a suicidal virus

Lawrence Loeb’s laboratory has turned mutation theory upside down to force colonies of the HIV virus to self-destruct.

By using a special compound, Loeb and UW Microbiology Chair James Mullins pushed the mutation rate of HIV into overdrive, causing a kind of viral suicide that kills the population in a test tube.

Rather than try to slow mutation down—as is one theory for treating cancer—they speed up viral mutation to a frantic level where the rate of harmful mutations overtakes the helpful ones, and the entire population dies. This threshold, where the rate of mutation becomes harmful, is known as error catastrophe.

HIV is part of a family of viruses known as RNA viruses that are notorious for their rapid mutation. When confronted with environmental change, the presence of so many diverse mutations is an advantage. When the human body creates antibodies to fight the virus, for example, there are always a few mutants that turn out to be unscathed and live to reproduce. This is the reason that HIV is notoriously difficult to treat. One drug cannot kill off all the diverse mutations. Some always survive.

Error catastrophe takes a different approach. Loeb and Mullins speed up the viral mutation by introducing a compound known as a nucleoside analog. This compound is a fake—the HIV cells think it is a compound it would normally use during copying of DNA, but it has been doctored to cause mutations during copying.

The mutation rates are so high that too many damaging mutations accumulate and too few viruses survive to maintain the infection. In eight out of the nine cultures treated, the HIV levels declined below measurable levels.

“Each time the virus infects a cell it introduces a few more errors,” Loeb explains. “Most of the mutations do no harm. But eventually the virus accumulates so many errors that they inactivate it.”

If the same chemical manipulation holds true in mice, it may mean that science has a new weapon against AIDS. One caveat, however. Even if this treatment proves practical, it will not be a “cure.” It can’t eliminate any dormant forms of the virus in the human body, only active forms.