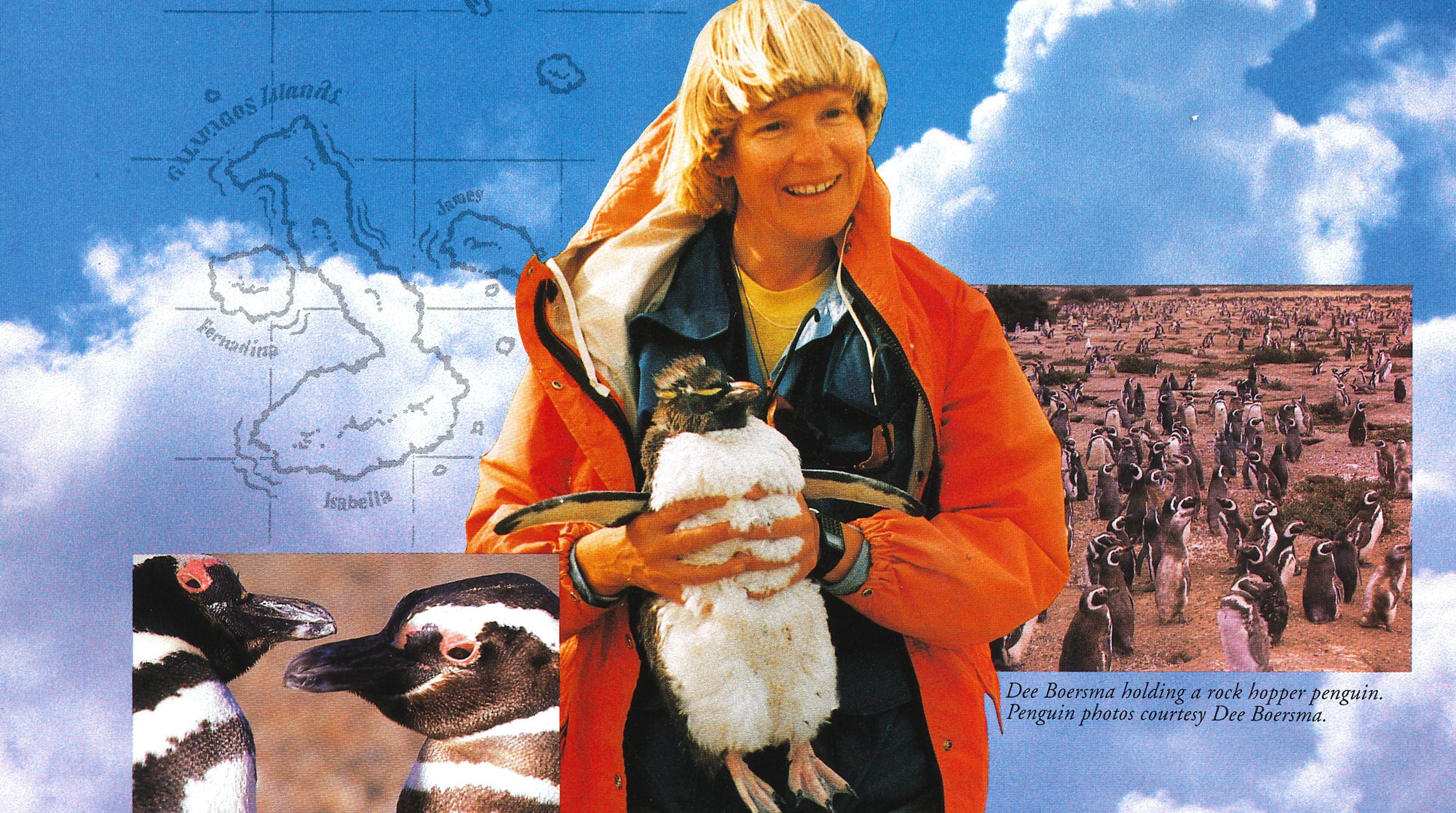 When P. Dee Boersma was seven or eight years old, her mother came in from the yard carrying a large red, black and white moth, its wings shimmering faintly in the evening light, and said, “Dee, everyone needs a hobby.” Inspired by her mother’s words and that first glorious cecropia moth, she took up the net and field guide and spent many hours outside chasing butterflies, so to speak.

Boersma turned a hobby into a vocation and began her life as a naturalist. The capture of one moth would lead eventually to the sparing of thousands of penguins from “harvest” and possible extinction, thanks to Boersma’s life work.

As a professor of environmental studies and zoology, Boersma is known for her research on penguins and storm-petrels. The work takes her to the ends of the Earth, from Argentina to Antarctica to Alaska. She often spends weeks or months at a time, examining and tagging animals, counting eggs and chicks, inspecting rookeries, sometimes trying to clean up environmental damage, and casting her scientist’s eye on the play of land, water, birds and their prey and predators.

“When I went to college, I expected to become an entomologist,” she says, “but I soon found out that the field was mainly about how to kill botflies.” Only when she took an introductory ornithology course did she begin to find the scientific issues that interested her.

“I’ve always been motivated by our amazing lack of knowledge about our fellow creatures. There are many,” she points out, “that have never really been studied.”

Such was the case with the Galapagos penguin, Boersma’s Ph.D. topic. “I wanted to be in the Galapagos,” she recalls. She chose those islands’ penguins because they had been passed over in ornithological research.

While penguins are often caricatured as a silly, tuxedo-wearing animal or used as an arch-nemesis for Batman, they actually have egalitarian and affable natures, Boersma explains. Like an ideal human family, both parents share in raising the young.

She spent three years in the Galapagos, “before the advent of tourism.” (She’ll be returning in March to lead a UW alumni tour.) Boersma immersed herself in the breeding habits of penguins. With that work, she earned her doctorate at Ohio State in 1974, then joined the University of Washington faculty and its Institute of Environmental Studies.

In her early research, Boersma found that the Galapagos penguins simply weren’t breeding. The waters of this tropical paradise are kept cool enough for penguins and sea lions by the Peruvian and Cromwell currents, she explains, but 1972 was an El Nino year.

The trade winds and ocean currents combined to create a large-scale warming trend in the Pacific. “The birds just won’t breed in that kind of heat,” she says.

Boersma became fascinated with the factors affecting reproduction. Were the peaks and valleys natural or caused by humans? What drives this natural variability (like El Nino years)? How low do natural population cycles go? At what point is a species doomed? To what extent are people increasing that variability?

“I didn’t think we could understand the ecological systems we were supposedly managing until we could answer those questions,” Boersma notes.

Boersma’s Galapagos research prepared her for a crucial project in Patagonia — the bottom of South America. Every September a half million Magellanic penguins come ashore at Punta Tombo, Argentina, to breed. Japanese investors asked the Argentine government for permission to “harvest” 48,000 of these diminutive penguins every year for meat and glove leather. 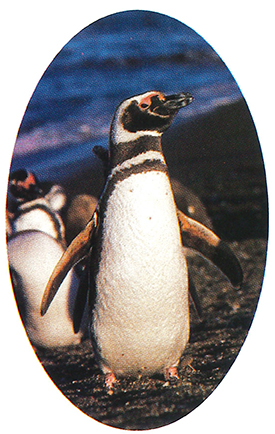 But basic knowledge of the penguins’ breeding habits and populations was missing. In 1982 environmentalists convinced the government that without that basic knowledge, no effective management plan could be written. For the last 10 years, Boersma and others have been gathering the needed data. What they have found, not surprisingly, is that the Japanese proposal would have decimated the penguin population in short order.

The penguins, she explains, require a high adult survival rate, living in the wild 10 or 20 years. In their naturally harsh environments, few juveniles survive to maturity. Large numbers of healthy breeders are needed to maintain the population.

And so, although the original 15-year study was to determine how many Magellanics might be hunted, Boersma doubts they ever will be. The Argentinians are now convinced of the birds’ value, both intrinsically and economically — thousands of tourists come to see them every year. Still, the Magellanics are threatened — since 1987 about 30 percent of the breeding population has died as the result of off-shore oil spills, dumping and other factors.

Even before she began studying Magellanics, Boersma had been investigating another little-known species, the fork-tailed storm-petrel, on the Barren Islands in Alaska. Usually scientists must destroy and dissect creatures to track their eating habits. But because storm-petrels vomit on attackers as a mode of self-defense, scientists could look closely at the content of their food without having to kill them.

Since the storm-petrels skim the ocean waters for crustaceans and small fish, their regurgitated dinners were ideal for measuring how much pollution the food contained, thus indicating the quality of the waters.

Boersma’s studies of the storm-petrel ceased in 1982, but they established a vital baseline for measuring the damage from the May 1989 Exxon Valdez oil spill. Because Prince William Sound flushes out into the Barren Islands, Boersma has been back since 1990, monitoring breeding rates of storm-petrels, murres (the Northern Hemisphere’s equivalent of penguins), and tufted puffins.

“What we have found,” Boersma says, “are late hatching dates, smaller eggs, fewer occupied burrows (indicating lower reproductive activity), and lower growth rates for chicks. What we don’t know is to what degree different factors are responsible and whether or not the trend will reverse.” 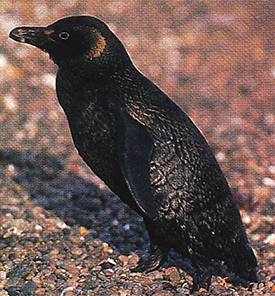 Boersma believes that natural climactic cycles have long had effects on birds and other wildlife, but that human factors are now preventing populations from recovering even in the most favorable years. Pollution, decimation of food sources, and outright slaughter, she says, are obvious sources of threat to the species she studies.

Then there is the question of global warming. Temperature is an important factor in the success of storm-petrel breeding rates. We know that El Nino years reduce their populations. But 1991 breeding rates were even lower than in El Nino years. “Does that reflect a longer natural warming cycle that will eventually cool?” Boersma asks. “Or is it a long-term shift in the environment? To what extent is that caused by humans? The truth is we don’t know.”

While global warming may not be proven, “humans are making the systems more variable,” she says, “and we are going to have to decide how important these other creatures are to us. What is going to be the balance?”

Boersma often argues against the “them vs. us” mentality that so often characterizes environmental debates such as over the Northern spotted owl. In fact, in a 1990 discussion of Puget Sound area airport options, she went on record saying that animals and airports need not be mutually exclusive choices.

Still, Boersma thinks the balance is off. On the board of directors of Zero Population Growth from 1976 to 1982, she is a firm proponent of human population control and reduced consumption in prosperous countries like the U.S.

“There are just way too many people in the world,” she says, “but it’s not enough for wealthy nations like ours to sit back and tell the developing world to quit having large families. We in the West still consume a great deal more than our share of the world’s resources, and we need to cut back.”

“Humans are making the systems more variable, and we are going to have to decide how important these other creatures are to us.”

Not many of us will give up our luxurious lifestyles, she acknowledges, although she thinks we can temper them with moderation and intelligent consumer decisions. In addition, Boersma thinks it is simply “irresponsible for people in this country to have more than one child.”

But she is careful not to attack individuals for their choices. “We just aren’t dealing with the issue as a society. We have no policy; people are not informed of the consequences of their choices. We need a more sensible system to inform people about the actual, long-term costs of their decisions.”

Boersma has always led a sort-of two-career life, with a semi-professional, long-term involvement in women’s rights and other social issues. She recalls a college professor telling her that she would have to choose one or the other — social concerns or science — but Boersma doesn’t really see it that way.

“They’re not separate issues,” she asserts. She points out that while science tries to answer some kinds of questions, like which factors are leading to bird population declines, it can’t answer others, like how important these birds are to people or whether we find the natural world worth preserving.

As resources diminish, she notes, “we will be dealing with more and more of these clashes. I think the university is an appropriate place for airing these debates.”

Despite disturbing results in some of Boersma’s recent studies, she remains an optimist. “Working with students is really exciting,” she says. “And we can have some real impact, like we did in Argentina.”

Having had great response from her Argentine students, much of Boersma’s hope remains with developing countries.

“Maybe they won’t be as greedy as we have been in the West,” she says, “but maybe we can also influence young people in this country to ask themselves how many TVs they need, how many BMWs they really have to own, how many children they really want to bring into this fragile world.”

Lisa Roney is a graduate student in creative writing at Penn State University. She spent last summer as acting associate editor of Columns.