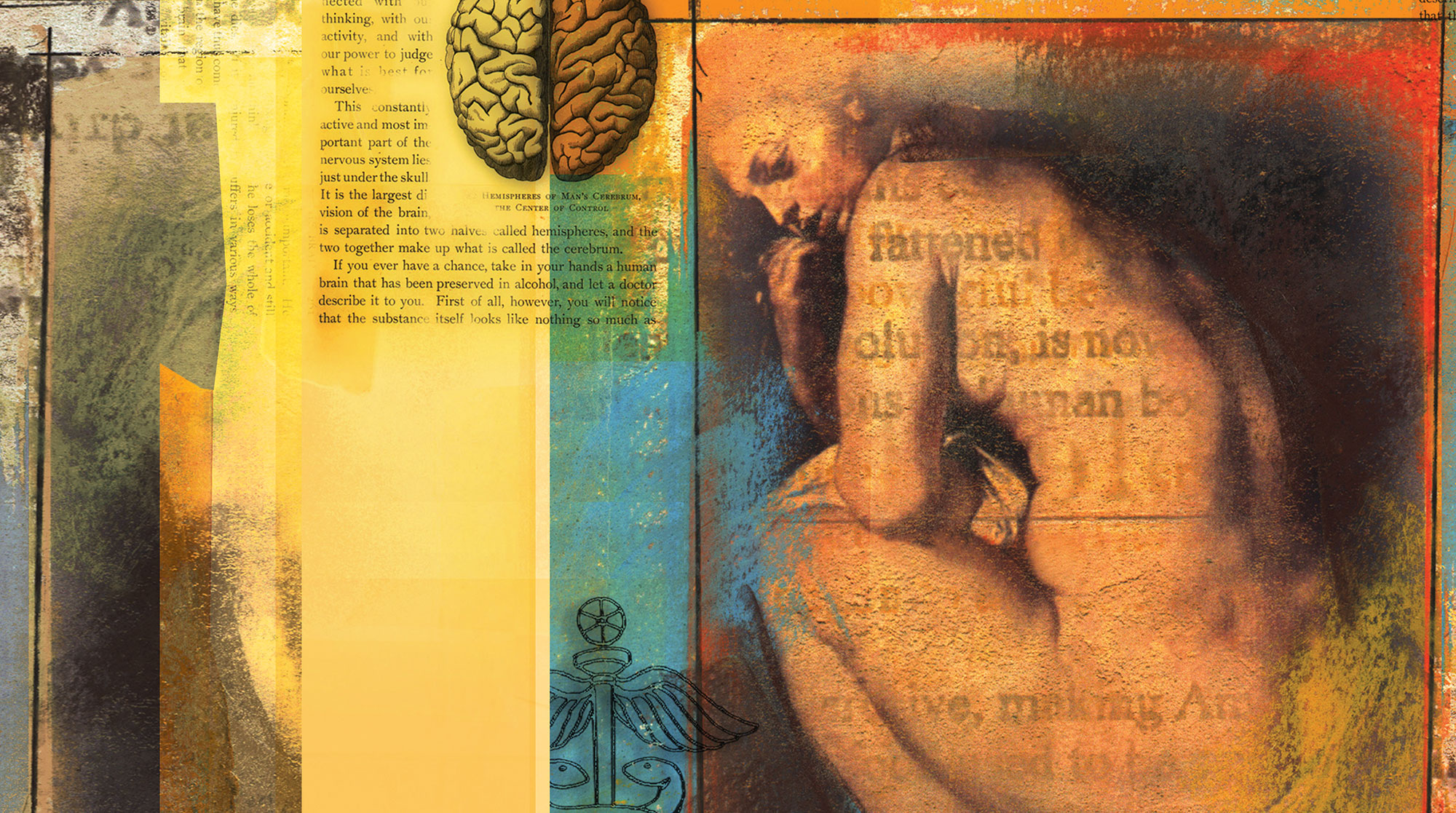 Losing weight and keeping it off is an uphill battle that a lot of Americans need to win. The Centers for Disease Control estimate that 78.6 million U.S. adults are obese. They are at risk for diabetes, high blood pressure, coronary artery disease, stroke and more. Obesity and diabetes tend to go together: About 80 percent of people who have Type 2 diabetes are overweight or obese.

The UW has a number of first-rate researchers working on these diseases. Many of the researchers are associated with the Diabetes and Obesity Center of Excellence, which was created after the School of Medicine determined that having them scattered in different laboratories across campus wasn’t the best approach to working on solutions to these problems. Many researchers are united at the center to maximize collaboration, and now most research is a shared process.

For decades, diabetes research focused on finding ways to increase insulin in the body or increase the body’s sensitivity to it. Obesity-associated insulin resistance is a major risk factor for Type 2 diabetes. Researchers are now looking at obesity and its interdependent relationship to the disease. Once a person begins taking insulin to control blood sugar, it isn’t unusual for them to gain weight. One way to reduce the dose of diabetes medication and improve health is weight loss. When obese people drop pounds, blood sugar is lowered and better health ensues, but estimates are that only two percent of people who lose weight can sustain the loss.

Michael Schwartz, Robert H. Williams Endowed Chair, professor of medicine and director of the center, and his colleagues Greg Morton and Josh Thaler—working with collaborators from universities in Cincinnati, Michigan and Munich—have discovered that damage to a specific area of the brain known as the hypothalamus may help to explain why obese people regain weight. Schwartz and colleagues have growing evidence that the brain plays an important part in regulating not only body fat stores, but also blood glucose, a simple sugar found in many carbohydrates, and the development of Type 2 diabetes.

Glucose regulation depends on three things: the secretion of insulin from islet cells of the pancreas, the sensitivity of body tissues to the action of insulin, and a set of mechanisms that are altogether independent of insulin. The work by Schwartz and his colleagues shows that neuronal circuits in the hypothalamus can have a powerful effect in lowering blood glucose levels without the need for insulin. Also, when the hypothalamus is damaged, this can contribute not only to obesity, but to diabetes as well.

Researchers have known for a while that people who are overweight have inflammation in their hypothalamus, but Schwartz, Thaler and their colleagues wanted to know what causes the inflammatory response. So, they gave a high-fat diet to lab mice and rats. Within 24 hours, inflammation was present in the hypothalamus. Then, the brain began to fight back, using cells that repair injured neurons. Schwartz and other UW researchers looked at MRIs in a small group of people and found that those who were obese displayed more of this hypothalamus injury response than people who weren’t.

Everyone has had the experience of seeing a chocolate cake and feeling the urge to eat it. Why? Research led by Ellen Schur, associate professor of medicine, indicates that the brain drives behavior, especially if a person is hungry. Schur conducted a study with 21 pairs of identical twins. They were given breakfast, then had a baseline MRI brain scan several hours later. Next, they had a meal of macaroni and cheese to satisfy their appetites. After the meal, a second scan was done, during which the participants were first shown pictures of fruits and vegetables, and then foods like pizza and french fries. The researchers measured blood flow to see how the parts of the brain that regulate appetite responded. Then the twins could choose what they wanted to eat from a buffet.

Obese people who have lost weight produce more of an enzyme that makes regaining weight easier.

The twins tended to rate appetite similarly and eat similar amounts. However, the brain of the twin with the lower blood sugar reacted more strongly to the pictures of high-calorie food. And while the amount of food consumed didn’t vary a lot, they didn’t eat the same things. The twin with the lower blood sugar chose higher-calorie food. Schur says eating regular meals can prevent dips in blood sugar that make that cake more enticing. Obese people who have lost weight produce more of an enzyme that makes regaining weight easier. It is harder for these people to keep the weight off; it isn’t that they lack self-control. “When I heard a patient who was gaining weight say, ‘I eat like a bird and I’m always hungry,’ I used to think, right, like Big Bird, but it turns out obese people are more efficient at calorie utilization. Their hunger doesn’t go away,” says John Brunzell, professor emeritus of medicine.

Brunzell, however, offers a nugget of hope to those trying to maintain weight loss. “Exercise and be realistic about how much weight you can lose. With 10 percent weight loss, maybe even 5 percent, there will be big improvements in lipids and blood sugar,” he says. Losing a small amount of weight and exercising may not get you into your high school band uniform, but it might prevent Type 2 diabetes.

Dianne Lattemann, research professor in the Department of Psychiatry and Behavioral Sciences, has found that feeding rats a 30 percent fat diet, which is the high end of what’s acceptable for humans, increases the animals’ desire for sucrose. “We are feeding animals diets high in stearic acid and palmitic acid and that increases the desire for sucrose. We are talking hamburger and french fries,” she says. That may be why milkshakes are frequently ordered with a burger and fries. Lattemann also found that giving rats a high-fat diet just before, during and after the transition into puberty significantly increases their motivation for sugar solutions.

The news isn’t all grim. The truth is that not all obesity is the same. Alan Chait, head of the Division of Metabolism, Endocrinology and Nutrition, says there are two types. Unhealthy obesity involves inflammation and body fat distributed internally, squeezing around the organs. Metabolically unhealthy obese people often have lipid conditions, including low levels of HDL cholesterol (the good kind), high blood pressure and pre-diabetes or diabetes. But the other group of obese patients is not metabolically unhealthy, meaning they don’t have lipid abnormalities and hypertension, and fat is carried in the buttocks rather than the abdominal area.

Another aspect of UW obesity research has more to do with social disparities, than with metabolism, physiology and biology. Adam Drewnowski, professor of epidemiology and medicine and director of the UW’s Nutritional Science Program, says obesity rates in Seattle-King County depend very much on where you live. Some factors have to do with simply being able to afford recommended healthy foods. Unhealthy foods are cheap and available on every street corner in low-income neighborhoods. Drewnowki says it takes a good deal of resilience to stay away from those foods in that environment. “There is a resilient group that positively deviates; they are people faced with the same challenges as everyone else, but somehow they arrive at the right answer,” he says. Drewnowski’s team is beginning to look at the characteristics of this group who are able to resist environmental pressures.

Research isn’t the only way the UW is working on the obesity problem. In July, UW Medicine opened a weight-loss management program at UW Medical Center-Roosevelt in Seattle. The program is a relocation of the former Bariatric Surgery Clinic and an expansion of services to include new, non-surgical approaches to weight management. There is a multidisciplinary team of bariatric surgeons, an internal medicine physician, a nurse practitioner, social workers, physical therapists and a registered dietitian.

UW scientists studying these conditions are conducting the basic research that may finally lead to some answers. Maybe an obesity cure isn’t around the next corner, but Mike Schwartz and colleagues at the UW may find ways to reduce its devastating effects. Meanwhile, it may help to realize the truth in what John Brunzell says, “The bottom line is body weight is regulated.” That doesn’t mean a person can’t lose weight and keep it off, but it does mean it’s a challenge.