Many people feel down when they can’t keep their circadian rhythms in sync. UW researchers seek alternative ways to get them in step. 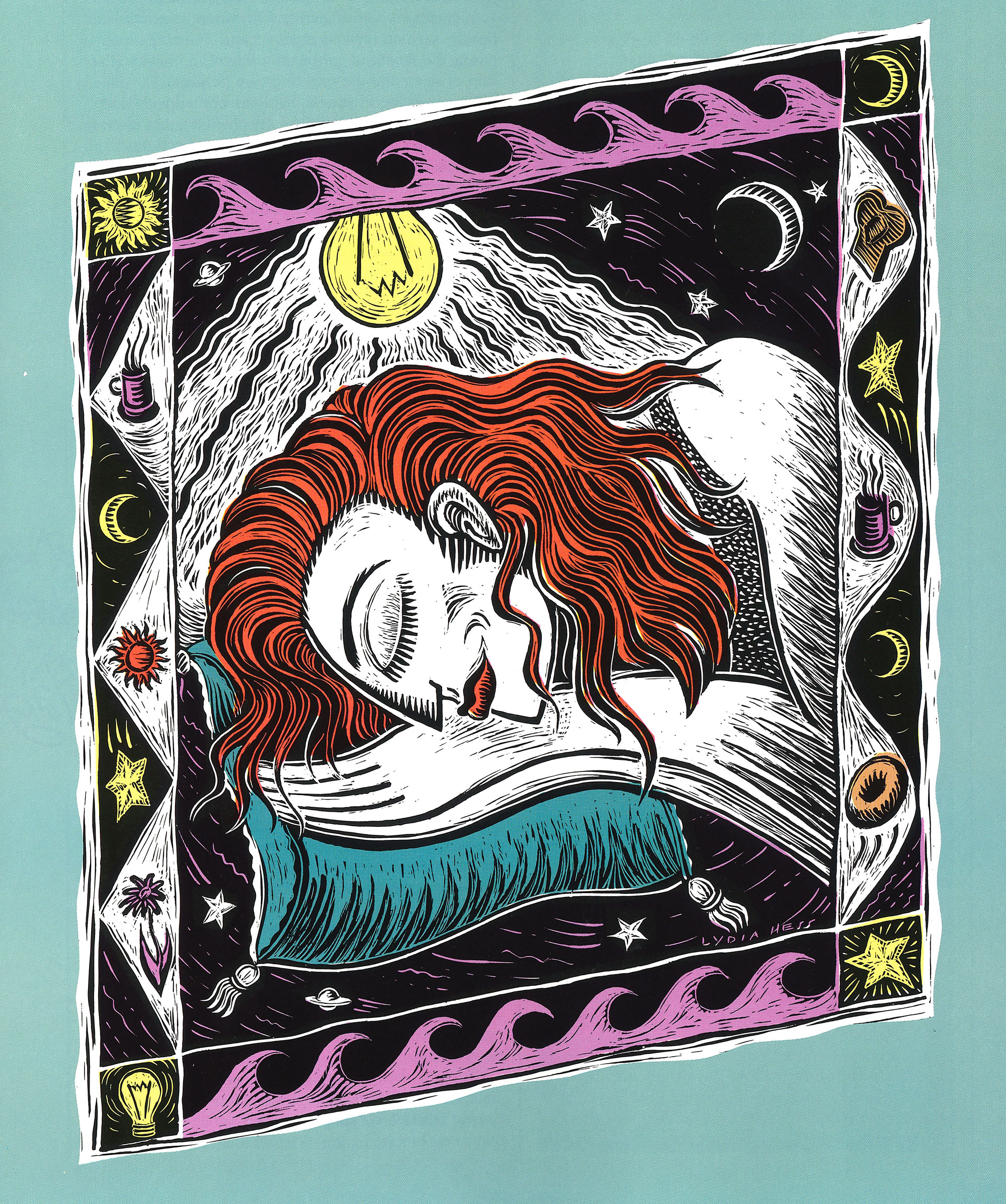 The winter blues tum reporter Kathleen Merryman into "Hell in Heels," a person she hardly knows. The cranky woman who inhabits Merryman's body from October until May drags herself through the days, feeling too scattered to tackle housework or shape a mass of information into a cogent newspaper article. Thanks to "carbo-loading," this winter interloper doesn't even fit into summertime sizes. Merryman doesn't like her much at all.

Merryman was willing to try anything to have her old self back during the winter doldrums—even sleeping with a spotlight above her pillow.

“Within days on the dawn simulator I felt like myself—the self I like, the self with energy and a sense of humor,” Merryman says of the device that bathes her in light for more than two hours before she awakens. “I felt almost as if my body were hungering for the light.”

Indeed, scientists believe people like Merryman need the early-morning light in winter to resynchronize their body’s “circadian” rhythms with their sleep cycles. Research suggests that lack of sunlight during the short, often cloudy, days of winter throws some people’s rhythms out of sync relative to their customary time of awakening.

Nearly all body systems ebb and flow over a day-long cycle, hence the name circadian (from the Latin circa = about + diem = day) rhythms. Throughout the day, hormones, body temperature, brain waves, enzyme activity, blood pressure, DNA synthesis and neurotransmitter levels fluctuate according to their own cycles. With time cues like clocks or the rising sun, human circadian rhythms generally follow a 24-hour pattern. Eliminate time cues (such as happens to people in caves or research settings), and our circadian rhythms “run free” over an average 25-hour cycle.

When sleep and circadian rhythms are out of sync, Avery and other scientists believe, people fall prey to a winter depression called seasonal affective disorder (SAD). Most people with SAD have circadian rhythms that are delayed (that is, occur late) compared to their sleep cycles.

“Without that morning light cue, the body clock just seems to drift.”

These people must get up at 6 a.m. when their body wants to sleep till 10. “It’s like sustained jet lag,” explains Avery, a UW associate professor of psychiatry and behavioral sciences at Harborview Medical Center.

If your circadian rhythms are out of shift with your sleep cycle, your body is not doing what it needs to be ready for the wake-up call of the alarm clock:

At the time they’re supposed to be waking up, people with delayed circadian rhythms have low levels of cortisol and core body temperature. In effect, a person with this type of winter depression is trying to awaken when her body tells her it’s the middle of the night.

Sleeping in until mid-morning might be the perfect solution, but try convincing your boss or your hungry toddler that you can’t roll out of the sack until 10 a.m.

In studies with SAD patients, Avery is testing whether circadian rhythms can be reset by using bright-light therapy or dawn simulators early in the morning. “Without that morning light cue,” he says, “the body clock just seems to drift.”

With bright-light therapy, people force themselves out of bed a couple of hours early and sit in front of a light box. Dawn simulators like SunUp and SunRiser, both products of Seattle firms, can be programmed to increase the light level gradually while you’re still sleeping, reaching full brightness when it’s time to get up. The body gets the cue even with the eyes closed. The simulators consist of a light hung 4 feet over the pillow, linked to a computer the size of a TV remote control.

Merryman, a reporter for the Morning News Tribune in Tacoma, volunteered for Avery’s study after receiving a press release about his work and realizing she suffered from all the symptoms listed. It was so hard to return the dawn simulator at the end of the study, she went out and bought her own when winter depression began to descend last November. She feels like a changed woman.

Despite promising results using early-morning light therapy for Merryman and others in his studies, Avery cautions that there’s much yet to learn about SAD and circadian rhythms. People shouldn’t necessarily rush out and treat themselves, he warns. The effective “dose” and timing of light treatment varies from person to person.

Why doesn’t everyone get depressed in the winter? It’s likely a combination of genetic and environmental factors, Avery explains. Some people may be more sensitive to changes in light, or naturally have a longer circadian rhythm period than the rest of us and thus be more prone to having it go out of sync, he says. “People vulnerable to winter depression may be unable to synchronize their circadian rhythms with non-light stimuli, like exercise, while others may,” he adds.

People’s circadian rhythms tend to shift as we age, but in the opposite direction from people with winter depression. As we grow older, our rhythms advance, making us want to sleep earlier at night and wake earlier in the morning than is normal in younger people. That’s not always convenient, even for retirees who no longer have to punch a time clock.

“You want to sleep when everyone else is sleeping. Sleep is a social phenomenon,” says Dr. Martha Lentz, research assistant professor of physiological nursing. There’s some evidence that women’s circadian rhythms shift even more than men’s as they age, putting older women even more out of sync compared to the general population.

In earlier studies in men and in current research with healthy women between ages 65 and 75, Lentz is comparing the timing of temperature highs and lows to the start of sleep and the start of dream periods.

“Temperature rhythm is highly associated with sleep and sleep quality,” Lentz says. By changing that underlying rhythm, “you can have a direct effect on sleep.”

It may be that light therapy in the evening will help older people delay their rhythms, helping them get back in sync with the sleep cycle of the general population.

Exercise is another possible treatment. "There's some evidence that if you raise your body temperature several hours before sleep, then you may have more slow-wave, deep sleep early in the night," Lentz says. "If so, we could use exercise to get better quality sleep."

A current UW study on exercise and circadian rhythms in older adults shows promising results. Preliminary data indicate that “by changing activity levels, we can indeed affect underlying circadian rhythms and sleep quality, and move older people in the direction where their circadian rhythms and the quality of their sleep ‘look younger,’ ” says Dr. Michael Vitiello, associate director of the sleep and aging research program in the School of Medicine and leader of the research effort.

“Exercise has a lot of effects on the body,” Vitiello notes. Regular activity may provide an additional time cue for the brain, improving body rhythms. Or patterns could be altered by the change in the body’s resting metabolic rate. “Another factor is that we are introducing a heat load in midday. There’s evidence that raising people’s core temperature briefly results in a change in sleep quality.”

Changing rhythms through exercise might lessen the chance of a heart attack or stroke. Men with an improved fitness level showed a decrease in some factors that cause blood clotting. “There’s a circadian variation in some clotting factors and we have affected them with fitness training, decreasing the early morning likelihood of forming blood clots,” Vitiello says. “If you are less likely to form a clot, you are setting up a much more healthy situation.”

Studies show that because of your circadian rhythms, you are more likely to have a heart attack or stroke in the morning (6 a.m. to noon) compared to other times of the day. If you are active during the day, morning is the time when your blood is most prone to clotting. Your blood is more viscous, platelets are stickiest, and clot-dissolving activity is low, explains Dr. Susan Woods, associate professor of physiological nursing. In addition, various hormone levels are peaking, making arteries more prone to narrowing.

Knowing a sick person’s circadian rhythms could help speed up the recovery process, says Woods, who is leading research in this field. For example, the same dose of drug might be absorbed, metabolized and excreted at different rates and might cause different side effects, depending on the timing of a patient’s rhythms.

Her studies show that compared to healthy people, patients in intensive care units have differently timed peaks in circadian rhythms for heart rate, heart rhythm, cardiac output and stroke volume. She also found the rhythms shifted as these patients recovered, with significant differences on the first day after surgery compared to the second day.

“Knowing the rhythmic fluctuations of these variables is useful to critical care nurses,” Woods says, because they could account for the patterns when they measure blood pressure, give drugs or make evaluations.

Her next study will look at heart surgery patients’ circadian rhythms before they come to the hospital, as they undergo elective heart surgery and as they recover. Future studies will test whether anything can be done to keep patients’ circadian rhythms closer to what’s normal, perhaps by keeping the care unit dark during a patient’s normal sleep time, or by having patients wear blindfolds when nurses have to turn on the lights.

Kathleen Merryman certainly thinks so. She has little trouble with the blues during summer, when the early sunrise cues her sleeping body to prepare for the blare of the alarm clock. But come Halloween, she’ll be hanging the spotlight above her pillow to get the false dawn she needs on dark winter mornings.

How to get life’s rhythms on a steady beat

Kathleen Klein is a writer for UW Health Sciences News and Information and a 1979 graduate of the UW School of Communications.